Accessibility links
Common Virus Can Cause Devastating Birth Defects : Shots - Health News Cytomegalovirus is everywhere, and it usually doesn't make people sick. But if a woman gets infected while pregnant, in rare cases it can cause serious problems for the baby. 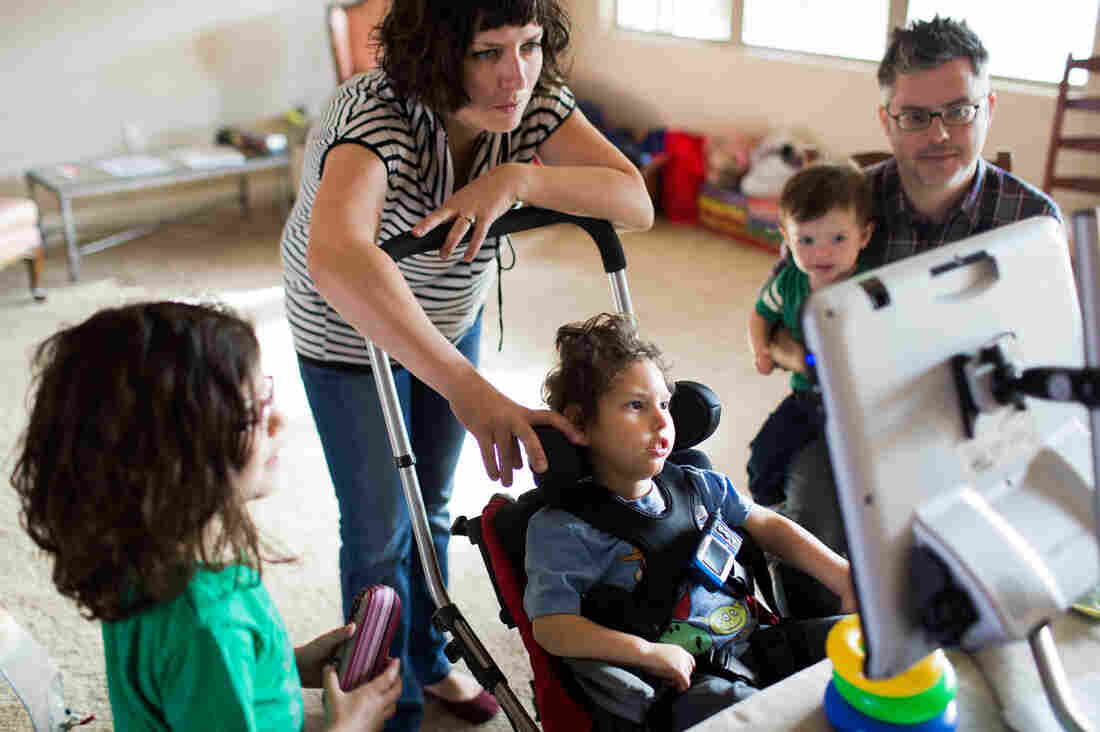 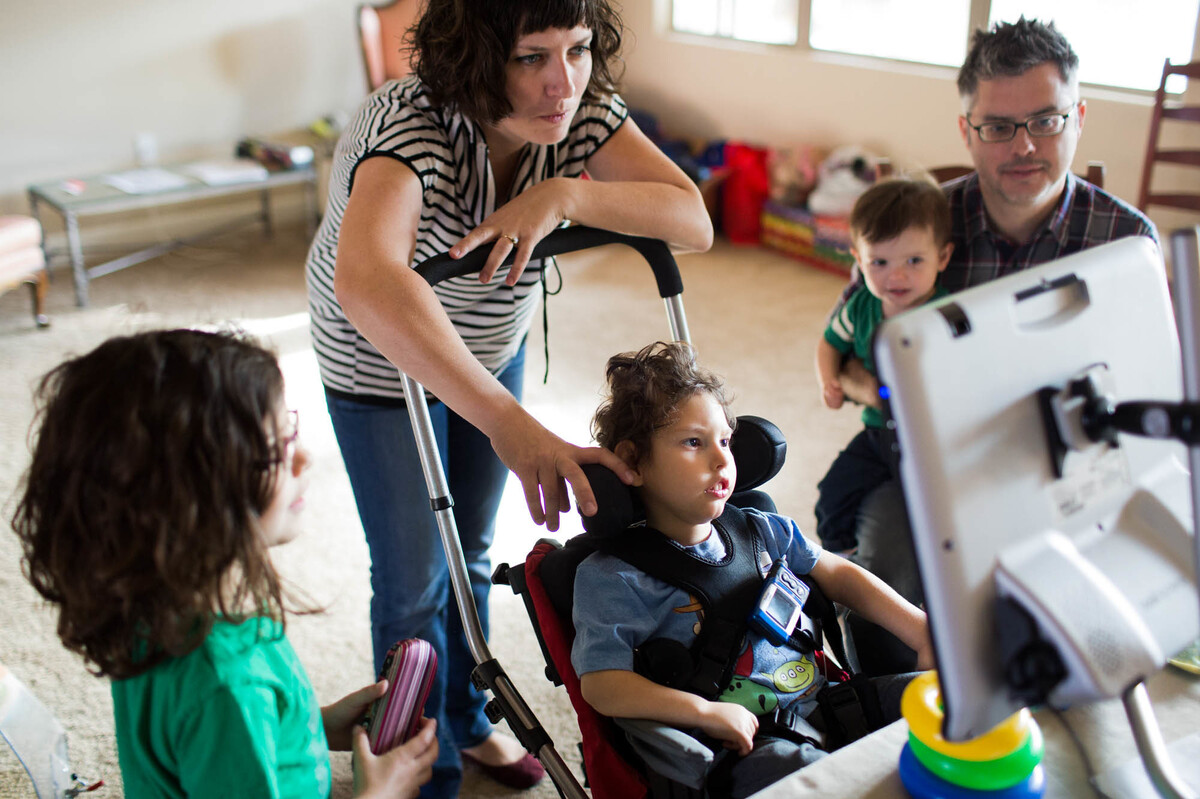 When Kathleen Muldoon had her second child everything was going smoothly. The delivery was short, the baby's APGAR score was good and he was a healthy weight.

"Everyone said he was amazing," says Muldoon.

But when a doctor noticed that Gideon was jaundiced, everything changed. Nurses put him under a fluorescent light to treat the problem. But it didn't work. Instead, he developed a red rash all over his body. Blood work indicated newborn Gideon was infected with a virus Muldoon had never heard of: Cytomegalovirus or CMV – a virus that can cause severe birth defects.

Muldoon, 40 of Peoria, Ariz., remembers the pediatrician coming in to deliver the bad news. 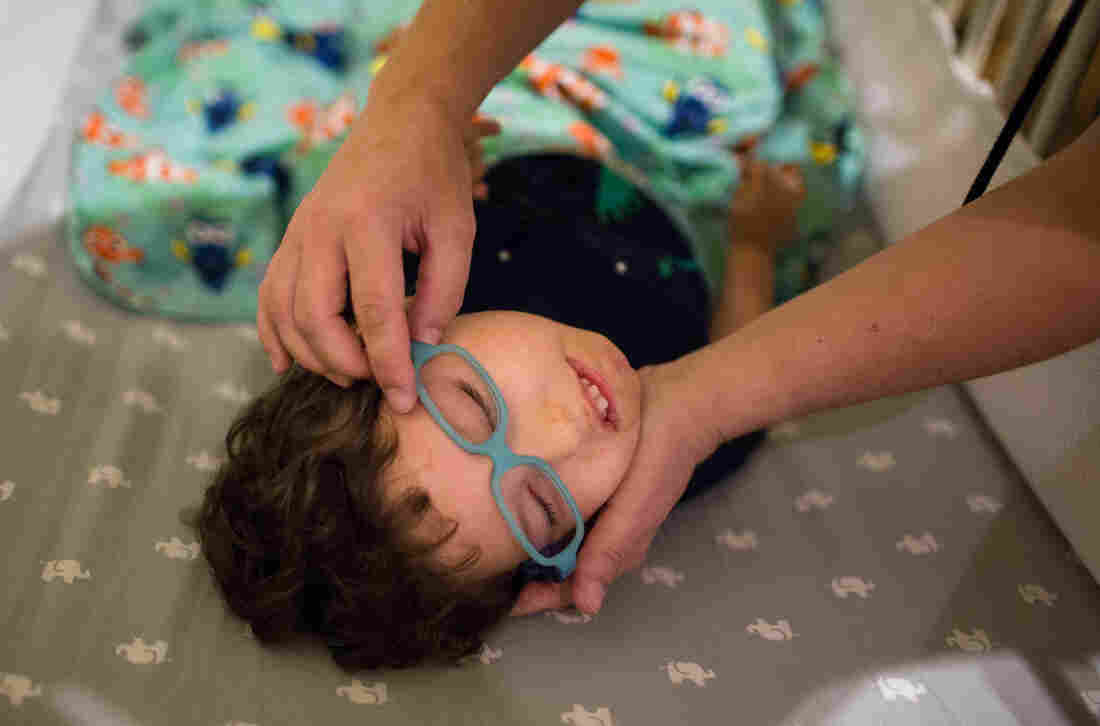 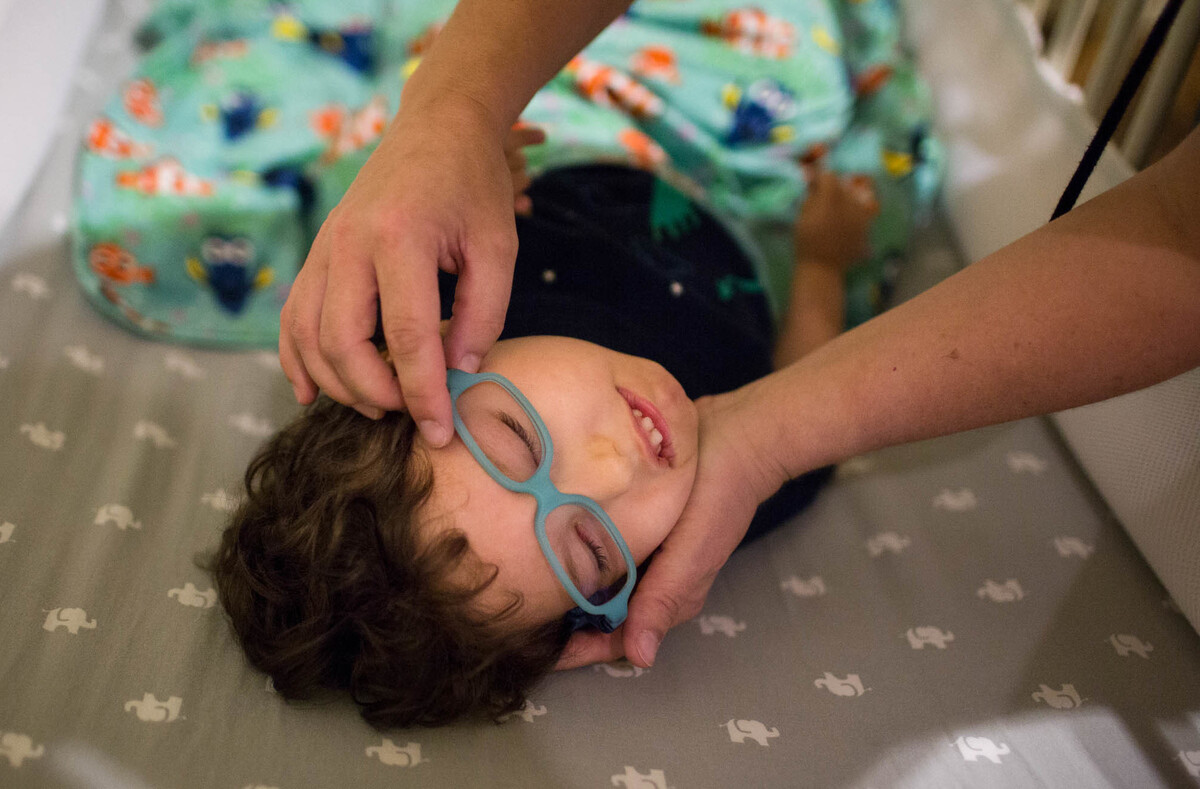 Kathleen helps her son Gideon get his glasses on. Part of Gideon's brain was damaged during development, which effects his vision.

Gideon's case is unusually severe. Every year about 40,000 babies are born in the U.S. infected with CMV. Most won't have any symptoms. But 1 in 5 will have CMV-related problems, like hearing loss, cognitive delay or neurological problems like Gideon.

Like cold and flu viruses, CMV is transmitted from person to person. It travels in bodily fluids like blood, urine and saliva. It is extremely common, according to Dr. Joseph Bocchini, a pediatric infectious disease specialist with Louisiana State University.

"Cytomegalovirus is everywhere," he says. It is hard to avoid.

By middle age, more than half of adults are infected. By age 5, nearly 1 in 3 children have it. They pick it up from kissing or touching someone or something, like a door handle, table or toy that's been contaminated. The virus can live on these objects for hours. Once you've been infected with CMV, the virus stays with you for life. 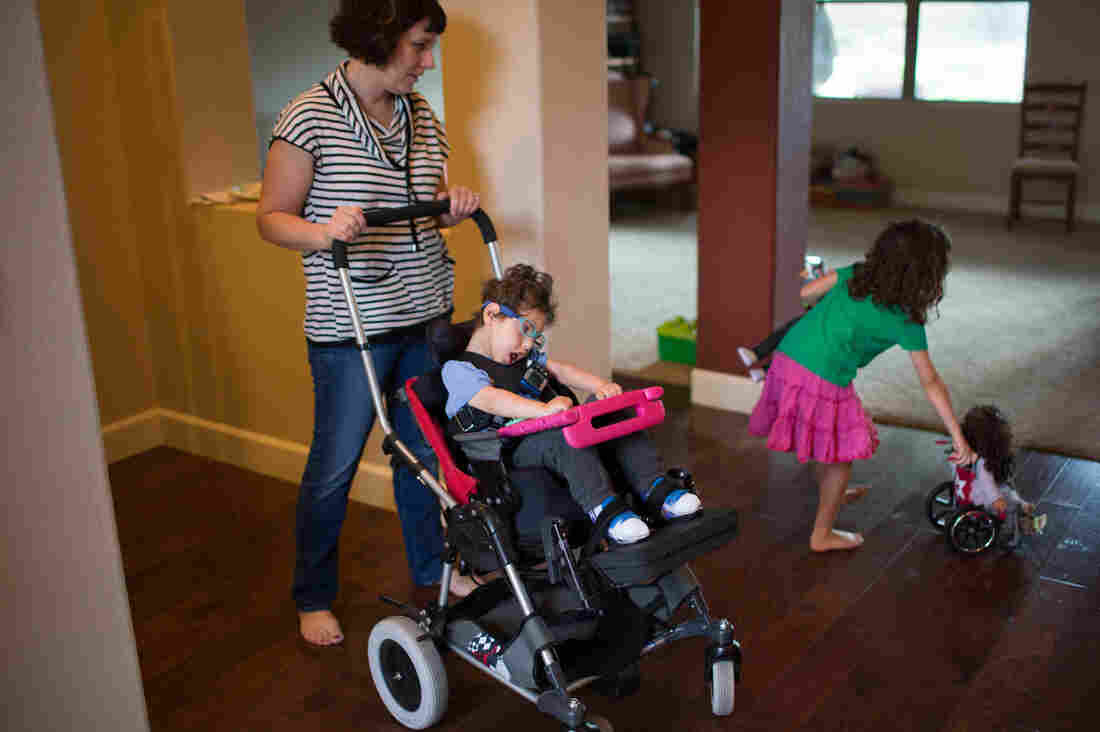 Kathleen helps Gideon into his chair while his sister Genevieve plays with her dolls, one of whom has a wheelchair. Caitlin O'Hara for NPR hide caption 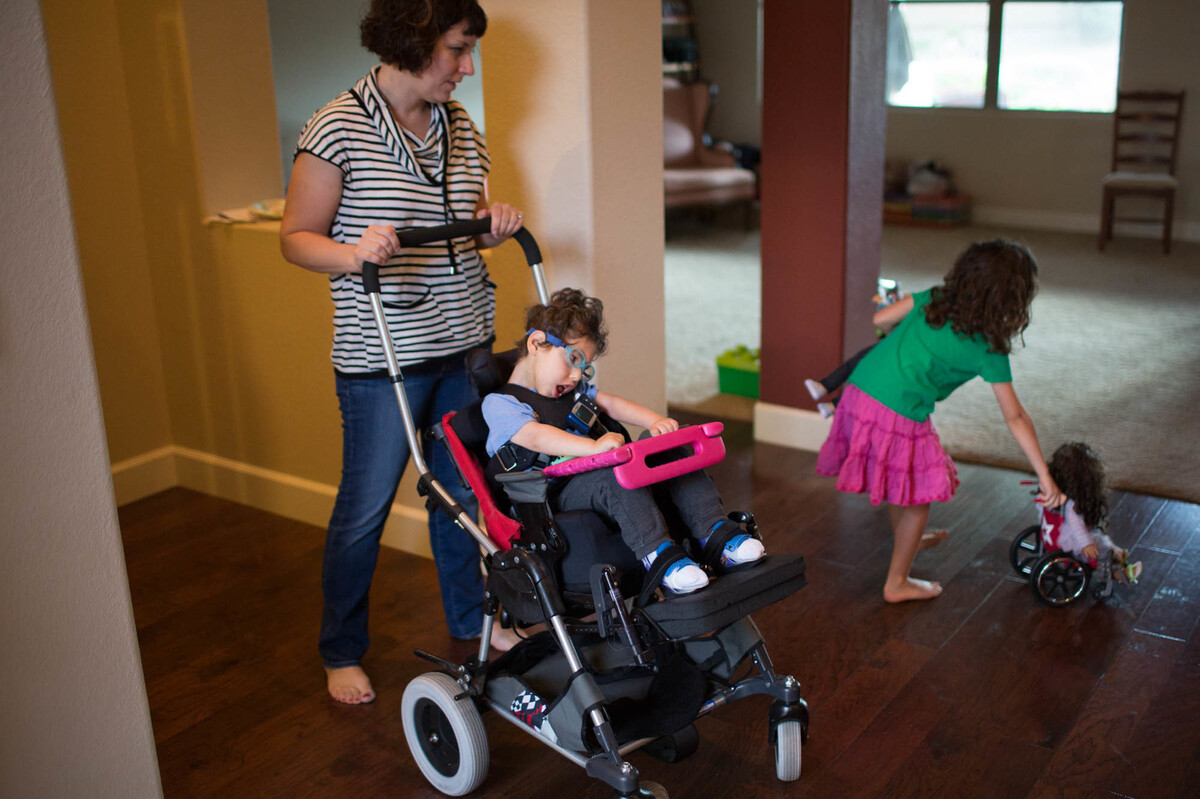 Kathleen helps Gideon into his chair while his sister Genevieve plays with her dolls, one of whom has a wheelchair.

For most people, CMV isn't a problem. It rarely causes symptoms and if it does they're pretty mild, similar to a cold, says Dr.Brenna Hughes, an associate professor of obstetrics and gynecology at Duke University School of Medicine. CMV usually just causes sniffles and possibly a low grade fever, she says.

However, CMV infection can cause serious health problems for people with weakened immune systems, such as individuals with HIV or those who have an organ transplant. And it can be a big problem for pregnant women.

Timing Can Make All The Difference

CMV can pass through the placenta to the fetus, but that doesn't happen very often. If a woman was infected with CMV before getting pregnant, there's a less than 1 percent chance she'll pass the infection on to her fetus. And even if the baby is infected with CMV, the majority don't have any symptoms. But timing can make all the difference, says Hughes.

If a woman gets infected for the very first time when she's pregnant, the virus is more dangerous "probably because there's more virus and less of an immune response already present in the mother," says infectious disease specialist Bocchini. About 10 percent of these babies will likely have CMV-related problems and about 3 percent of them will be severely affected like Gideon. 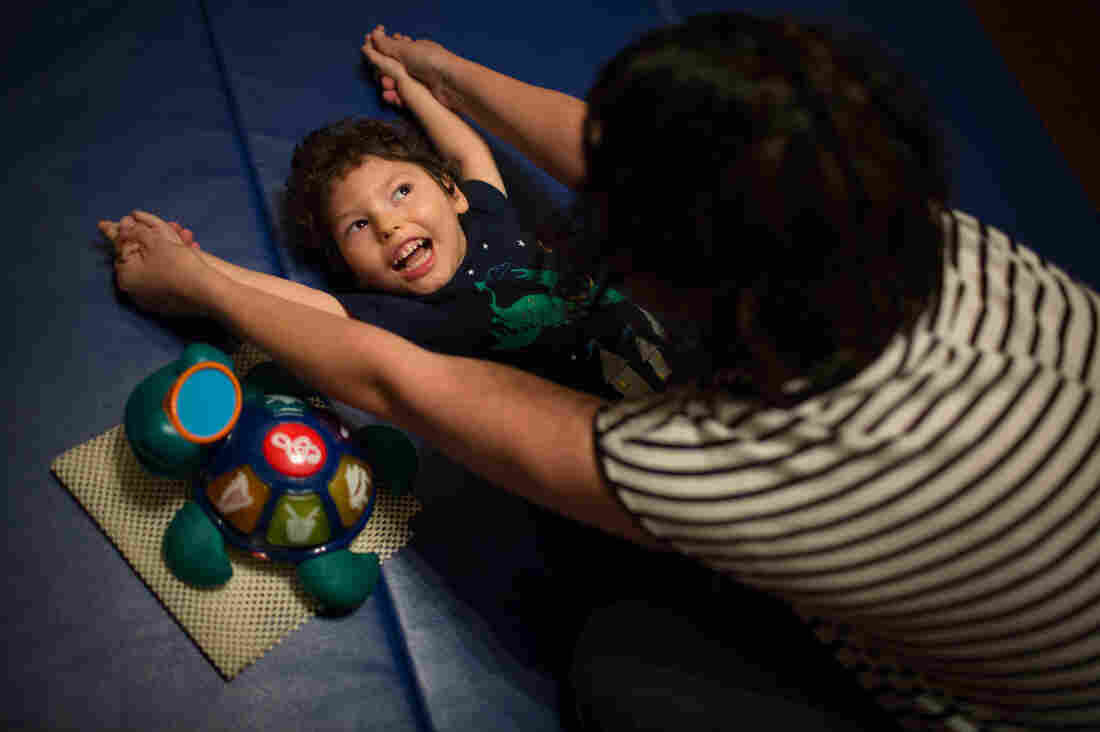 Muldoon helps Gideon stretch as he wakes up at their home in Peoria, Ariz. Caitlin O'Hara for NPR hide caption 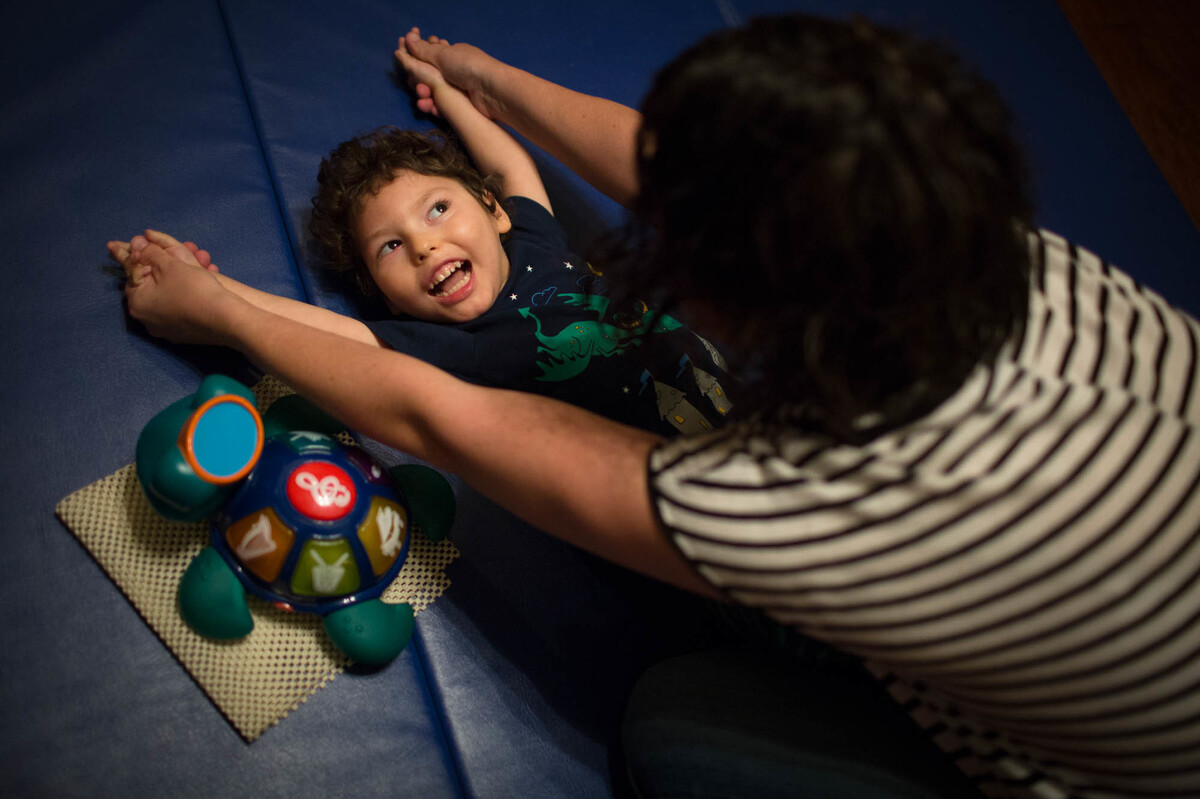 Muldoon helps Gideon stretch as he wakes up at their home in Peoria, Ariz.

The stage of pregnancy when first infected also makes a difference. If the mother's in her first trimester, when organs like the brain are developing, the consequences can be devastating. Doctors told Muldoon she was likely infected during her first trimester.

Today, Gideon is 3 years old. He uses a wheelchair, can't see well or speak, but he loves sounds and music. He giggles loudly when he hears his mother sing. But Muldoon is worried that even his precious hearing may be in jeopardy. CMV can cause hearing loss three to five years after the initial infection, and Gideon is starting to show some hearing loss in his left ear.

'I Had Never Heard Of This Virus'

When Muldoon reflects on her pregnancy, she is astonished that she didn't know anything about CMV before she had Gideon, especially since she's an anthropologist who teaches anatomy to medical students at Arizona's Midwestern University.

"And yet I had never heard of this virus," she says. 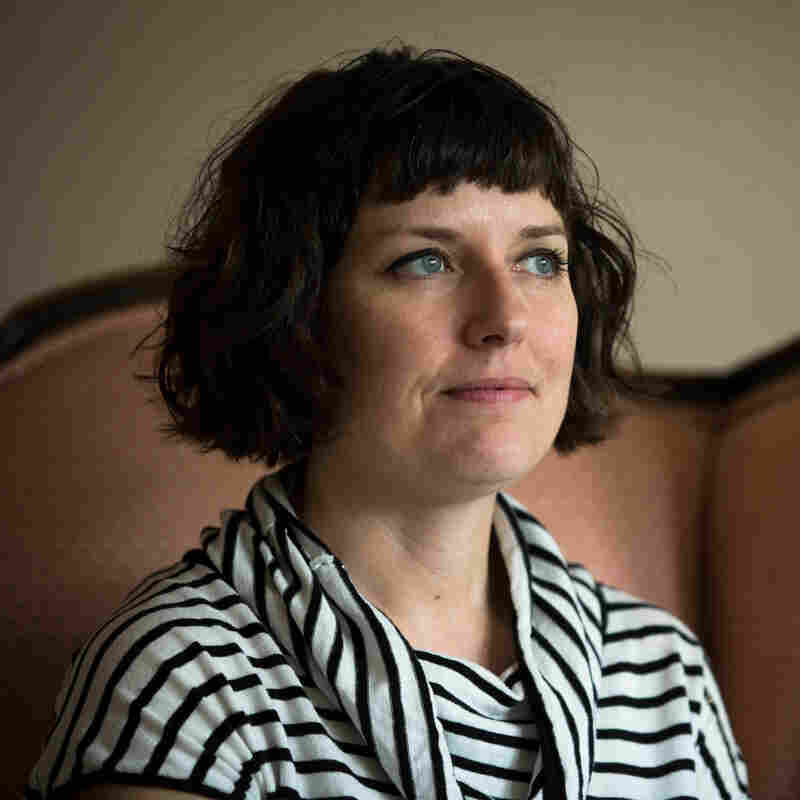 Muldoon works as an associate professor at Midwestern University, where she teaches anatomy. She had never been told about CMV. Caitlin O'Hara for NPR hide caption

Muldoon's not alone. A survey from the National CMV Foundation found only 9 percent of women knew about the virus and a study by the Centers for Disease Control and Prevention found fewer than half of OB-GYNs discuss CMV with their patients.

Hughes, who is also a spokesperson for the American College of Obstetricians and Gynecologists (ACOG,) says pregnant women are generally told the best way to avoid infection is "careful hand washing," and to avoid interacting with sick people.

Until 2015 ACOG recommended more aggressive prevention efforts, especially for women who are around toddlers, who can be hot zones for viral transmission with all their dribbling and drooling. They recommended pregnant women wash their hands every single time after they handle a child's toy or laundry and not to kiss a child on the face where contaminated saliva might be present. These suggestions were scrapped when no conclusive evidence was found that they actually prevent infection, says Hughes.

There's currently a debate in the medical community about whether to screen all newborns for CMV. Many doctors are skeptical, since there is no proven treatment. One study suggests antiviral medication in the first six months of life might decrease the risk of later hearing loss and cognitive decline.

"This is a challenging virus," says Dr. Mobeen Rathore, an infectious disease specialist with the University of Florida. "We need better diagnostic tools, better treatments and better ways to manage infection," he says.

Obstetrician Hughes agrees, and says further research and larger studies are needed. She notes that Congress approved $1 billion to support Zika virus research and prevention, but CMV does not have a line item for funding in the annual budget — this, despite the fact that CMV is far more common in the U.S. than Zika.