Accessibility links
Serious Injuries Can Linger After Opioid Overdose : Shots - Health News Emergency room doctors are just beginning to study a new kind of casualty in the opioid epidemic — patients who survive an overdose, but walk away with brain damage, kidney failure or dead muscle. 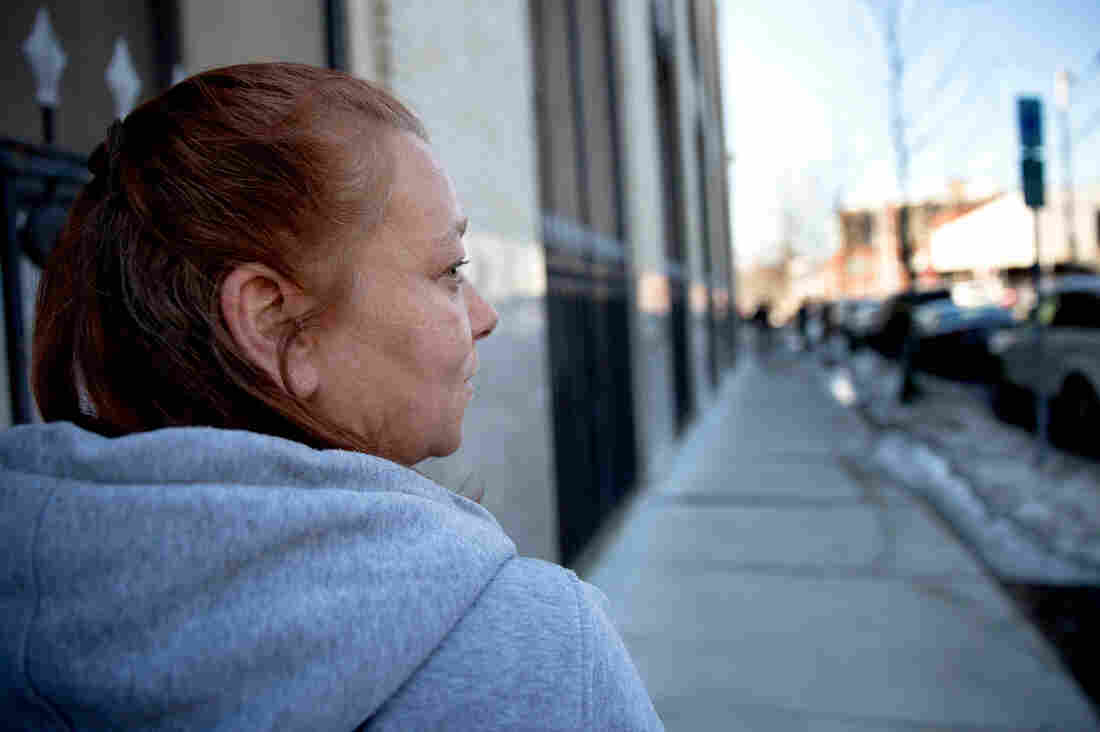 Lisa, a client at the AAC Needle Exchange and Overdose Prevention Program in Cambridge, Mass. Nearly five years after an opioid overdose she still limps — possibly because of damage the drug cocktail did to her nerves or muscles. Robin Lubbock/WBUR hide caption 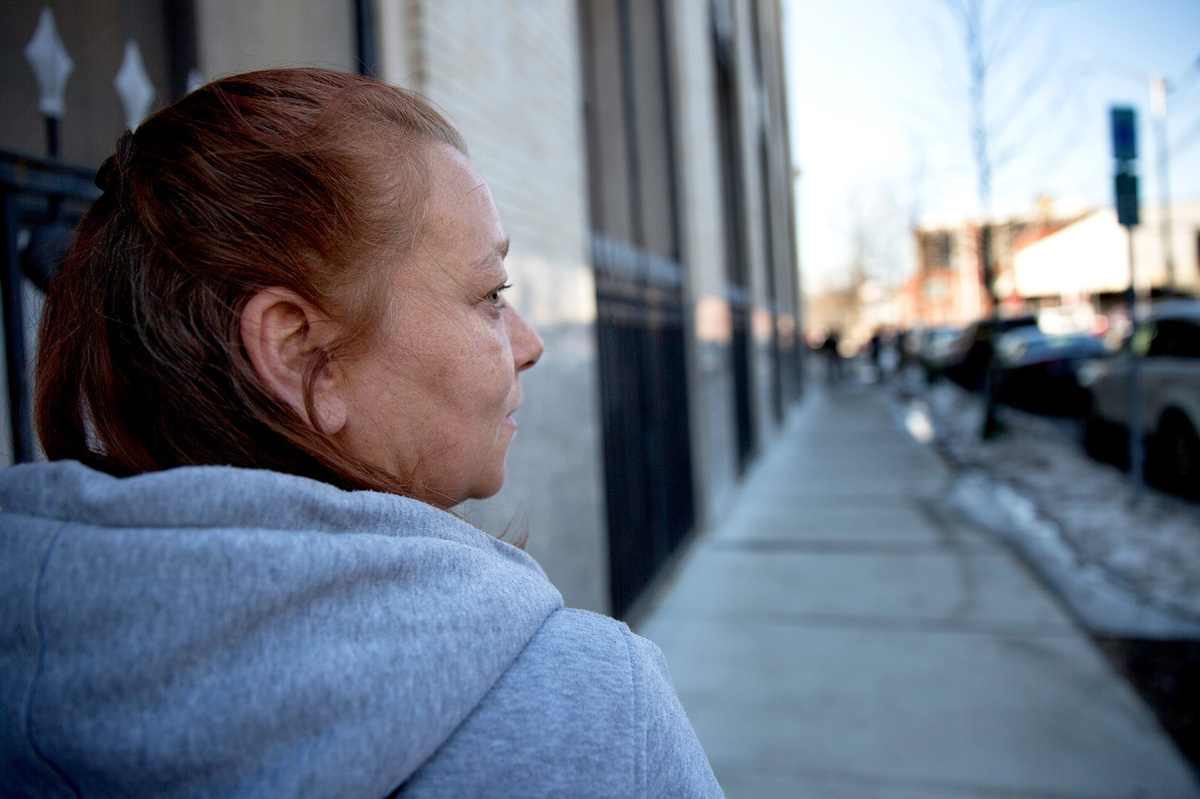 Lisa, a client at the AAC Needle Exchange and Overdose Prevention Program in Cambridge, Mass. Nearly five years after an opioid overdose she still limps — possibly because of damage the drug cocktail did to her nerves or muscles.

The trouble started for Lisa when she took a blood pressure pill and one to control seizures, along with methadone, a drug used to help wean patients off heroin.

"I inadvertently did the methadone cocktail and I went to sleep for like 48 hours," Lisa says, rolling her eyes and coughing out a laugh. "It kicked my butt. It really kicked my butt."

The last thing this 46-year-old Somerville, Mass., native remembers is starting to do laundry. That's where Lisa's daughter found her — passed out on the washing machine.

"My daughter brought me up and put me to bed. I hate the fact that she saw me like that," says Lisa. We're not using her last name because she's used illegal drugs and fears going public about that could harm job prospects.

Lisa lay in the same position on the bed, one leg bent under her body, arms folded across her chest, for more than a day. Family members checked to make sure she was still breathing. Lisa's daughter noticed that her mom's right leg had gone white and looked shriveled.

"She came in and massaged it really, really vigorously," Lisa says. "If she hadn't done that, I don't think I'd be walking on this leg. I think I would have killed it."

As it is, almost five years after the injury, Lisa says she still limps in some weather, "or I have what I call flabberfoot. My foot, like, slaps the ground when I walk."

Lisa never told a nurse or doctor about her injury.

"I was embarrassed. I didn't want anybody to know I had a drug problem," she says.

Lisa's injury may reflect nerve damage, which doctors say is common in people who misuse opioids. Or it may have been the result of something called compartment syndrome, where muscles are damaged or die because blood can't get in or out of part of an arm or a leg. In some such cases, the damaged muscles must be removed.

Dr. Ed Boyer remembers one of the first patients he treated in Massachusetts, a man who injected heroin while sitting, and stayed in that position, leaning to one side, for hours on end.

"When he woke up, he had a compartment syndrome of his buttock and they had to remove half of it," says Boyer, the director of academic development in the emergency medicine department at Brigham and Women's Hospital, and a professor at the University of Massachusetts Medical School.

"So you can have very severe and disfiguring injuries," Boyer says. "Because now this individual has great difficulty even walking."

Lingering damage to those who survive overdose

The common understanding of patients addicted to heroin or other opioids is that they either survive a high or die — but that there's no real damage to those who get up and walk away. Increasingly, emergency room doctors will tell you that's not the case.

"I would say at least 75 percent — every three of four patients who comes in after an overdose — has some sort of associated injury, whether it's a minor injury or major injury from that overdose," says Dr. Ali Raja, the vice chair of emergency medicine at Massachusetts General Hospital, the busiest emergency room in the Boston area.

The trauma ranges from frostbite or broken bones after a fall on the ice to serious brain damage. Raja says many injuries from drug use don't get treated because patients who are revived never come to the hospital, and those who do are driven by their addiction to leave the hospital quickly and use again.

"They often believe that they're just fine and they repeat the exact same circumstances that led to the overdose in the first place," Raja says. "And they're definitely prone to repeating the same injuries we just talked about."

That prompts another question for the emerging science of drug and overdose injuries: What's the effect of overdosing again and again? Dr. Alex Walley, an associate professor of medicine at Boston University School of Medicine, offers a theory about the impact on the brain.

"One way to think about this would be that an overdose is like a concussion, where you have a traumatic injury to the brain," Walley says. "If the person doesn't die, the brain recovers, but they may be, like with a concussion, more susceptible to a future event. And then there also may be cumulative damage that occurs."

That damage, Walley says, might make these patients more difficult to treat.

Another injury that doctors see among some overdose patients is kidney failure. When a person spends hours in one position, blood stops circulating through muscles and that living tissue can break down, releasing chemicals into the bloodstream.

"They can clog up the filtration system in the kidneys," says Dr. Melisa Lai Becker, chief of the Cambridge Health Alliance emergency department in Everett, Mass. "And when that happens, the kidneys can shut down completely."

Patients coming out of an overdose often vomit, which can lead to aspiration into the lungs and pneumonia. And then there's a condition called pulmonary edema, which hits some patients who are revived — their lungs fill suddenly with fluid.

"The lungs become so waterlogged that you can't get any more oxygen into the body even though the patient is wide awake and they're struggling to breathe," Lai Becker says.

Doctors offer different theories about why this occurs. Lai Becker says it may be related to a sudden change in blood pressure when a patient is revived abruptly with naloxone. Other doctors think it's a reaction to some part of the drug combination patients take. There are lots of questions among emergency doctors about why this is happening — it's why researchers at the Centers for Disease Control and Prevention are now wading into this new field of opioid use injuries, to try to get some data.

"We're only beginning to scratch the surface and trying to understand what is going on, on this front," says Mark Faul, a senior health scientist at the CDC.

Faul is studying the possible link between the opioid overdose and traumatic brain injury. He plans to collect data about how often an overdose leaves patients with permanent or temporary brain damage that that can leave them blind or deaf, or with amnesia or other cognitive problems.

And there's one more complicating factor: fentanyl. This very powerful opioid gives those who use it recreationally a high that is more intense than heroin's, but wears off more quickly. Traci Green, a senior scientist and deputy director of the injury prevention center at Boston Medical Center, says that means recreational drug users tend to use fentanyl more times a day than they would pure heroin.

"It also means more opportunity to overdose," Green says. "Simple math tells us that we're going to have more visits to the emergency department and we're going to potentially have more injury. And injury will beget injury."

Fentanyl can also change the kind of injuries some emergency rooms see — more falls and head trauma because taking too much of the opioid cuts off breathing immediately and patients collapse. But Lai Becker has a different perspective. She says she has treated fewer of what she calls "in between" injuries in the last six months.

On one end of the spectrum, she says, "we're seeing people who have fortunately had a good, full, complete reversal." On the other extreme, she says, "patients have either arrived dead, or we're able to resuscitate them, but unfortunately, they've already undergone brain death."

To avoid fentanyl injuries and overdoses, Green urges people who are addicted to the drug to at least use it in pairs — making sure one partner is stable before the other person injects. She says the state could help, too, by allowing patients who are addicted to opioids to use the drugs in a supervised setting like a hospital or clinic.