Accessibility links
'Pre-Existing Conditions' Reveal A Health Care Conundrum : Shots - Health News Insurers and politicians struggle constantly to thread the needle between making sure people have good health insurance and figuring out who should pay, especially for those who need a lot of care. 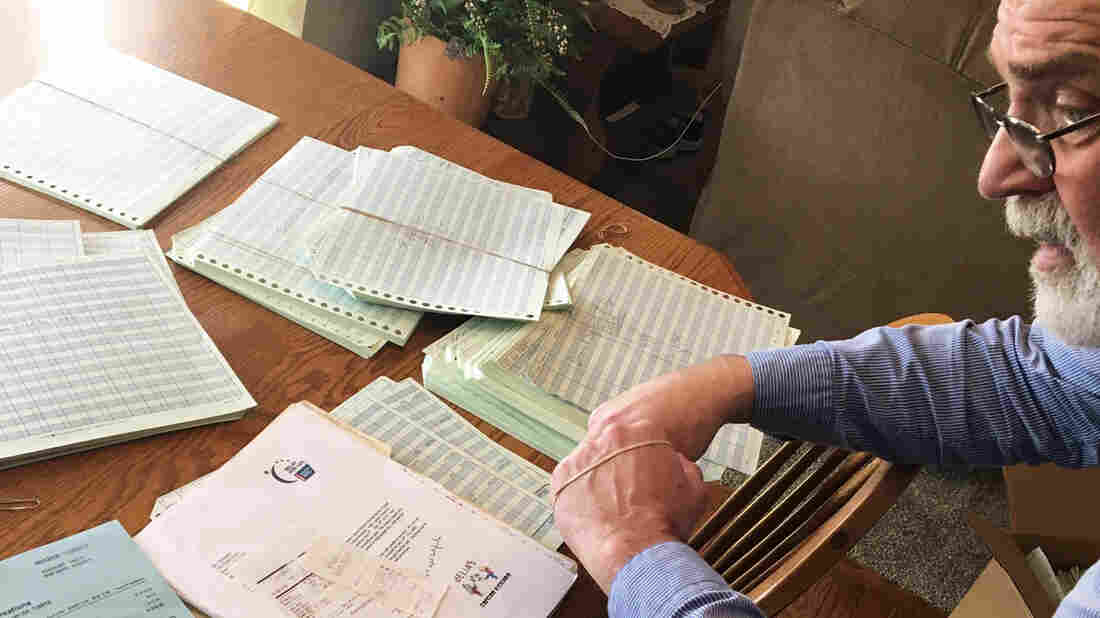 Carl Goulden, of Littlestown Pa., developed hepatitis B 10 years ago. Soon his health insurance premiums soared beyond a price he and his wife could afford. Elana Gordon/WHYY hide caption 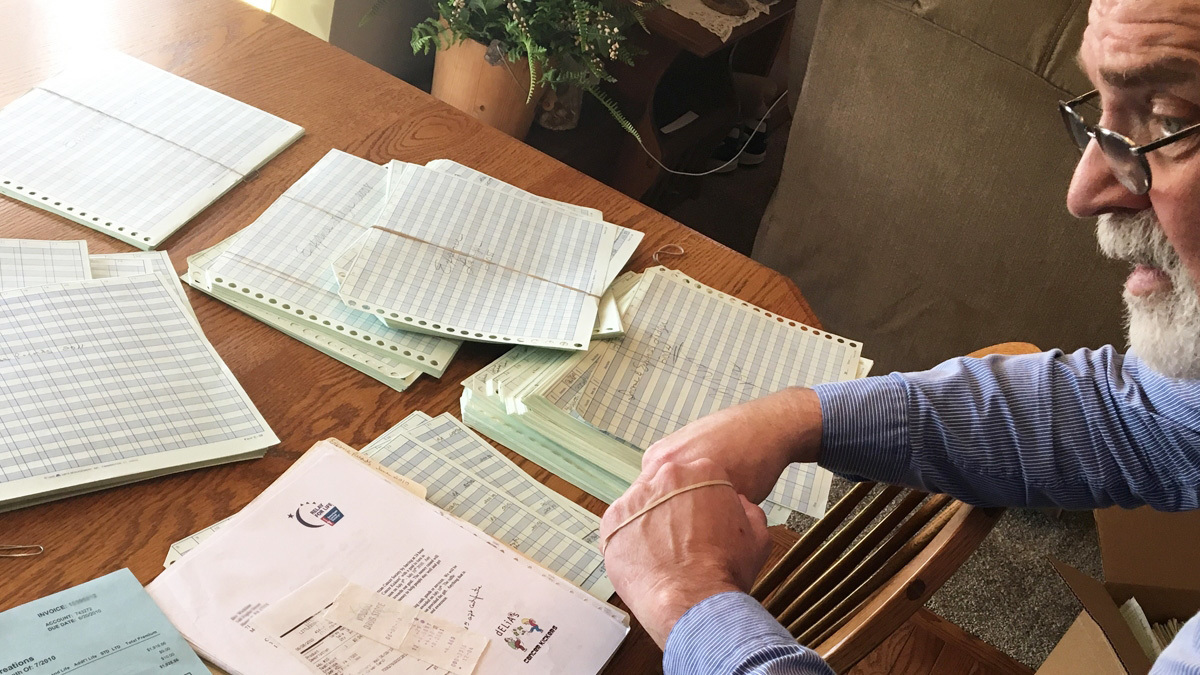 Carl Goulden, of Littlestown Pa., developed hepatitis B 10 years ago. Soon his health insurance premiums soared beyond a price he and his wife could afford.

For most of his life, Carl Goulden had near perfect health. He and his wife, Wanda, say that changed 10 years ago. Carl remembers feeling, "a lot of pain in the back, tired, fatigue, yellow eyes — a lot of jaundice."

Carl was diagnosed with hepatitis B. Now 65 and on Medicare, he had a flower shop in Littlestown, Pa., back then, so had been buying health insurance for his family on the market for small businesses and the self-employed.

The medications to manage Carl's hepatitis cost more than $10,000 a year — and if he ever needed a liver transplant, as some people with hepatitis eventually do, the further costs could be formidable. Thank goodness they had health insurance, the couple thought.

But then, Carl says, "the insurance renewals went way up."

After a few years he could no longer afford to buy the coverage — more than $1,000 a month — and also maintain his business. So he dropped the health insurance.

"I was devastated," he says, "because I didn't know when my liver might fail."

But that steep increase in his insurance rate was completely legal, says Pennsylvania insurance commissioner, Teresa Miller. And back then, before the Affordable Care Act became law, a patient like Carl Goulden might have had a very hard time buying another policy; he likely would have been turned down by other insurers because he now had what's called a "pre-existing" medical condition.

A family like the Gouldens would "just have been out of luck," Miller says.

Before the ACA, states had differing approaches to handling pre-existing conditions.

Pennsylvania was typical. Until the ACA mandated that insurers treat sick and healthy people equally, buying insurance was the wild, wild West.

Insurers couldn't overtly kick people off a plan if they got sick, but they could find ways to charge them a lot more, even those whose chronic condition wasn't all that serious — such as acne. For individuals looking to sign up in the first place, "an insurance company could simply decline to offer you insurance at all because of your pre-existing condition," Miller says.

Insurers who did offer a policy to someone with a pre-existing medical condition might have done so with a catch — the plan could require a waiting period, or might exclude treatment for that condition.

"So, let's say you had diabetes, for example," Miller says. "You might have been able to get coverage for an unexpected health care need that arose, but you'd still be on your own for any treatment and management of your diabetes."

From the perspective of the insurance company, these practices were intended to prevent the sick from signing up for a health plan only when they needed costly care.

Pennsylvania did try to partially solve this problem. It created a more scaled-back health plan, called Adult Basic, for those with lower incomes who didn't have any coverage. Lots of people signed up, but the plans didn't include coverage for mental health care, prescription drugs or more than two nights in a hospital. Even so, Miller says, the strategy proved too expensive for the state.

"That program was spending $13 million to $14 million a month when it was shut down," she says.

More than 30 other states dealt with pre-existing conditions by setting up what are called "high-risk pools," a separate insurance plan for individuals who couldn't get health coverage in the private market.

These plans could be real lifesavers for some people with conditions like cancer — which can cost tens if not hundreds of thousands of dollars to treat.

The experiences with high risk pools varied, but states faced lots of challenges, says John Bertko, an insurance actuary with the state of California. And the main problem was the high cost.

"The one in California, which I was associated with, limited annual services to no more than $75,000, and they had a waiting list. There was not enough money," Bertko says. "The 20,000 people who got into it were the lucky ones. At one point in time, there were another 10,000 people on a waiting list."

The pools also had catches; premiums were expensive, as were out-of-pocket costs. And plans often excluded the coverage of pre-existing conditions for six months to a year after the patient bought the policy.

New Jersey: Pre-existing conditions were covered, but with a catch

Around that same time, across the Delaware River, the state of New Jersey was trying something different.

"Insurers could not take health status into account," says Joel Cantor, director of Rutgers University's Center for State Health Policy who has been analyzing the New Jersey experience.

Before the ACA, New Jersey was one of just a handful of states that prohibited insurers from denying coverage to people with pre-existing conditions. Insurers also weren't allowed to charge people a whole lot more for having a health issue, and the plans had to offer robust coverage of services.

There was a one-year waiting period for coverage of a pre-existing condition, but a larger issue became cost. The entire individual market in New Jersey became expensive for everyone, regardless of their health status, Cantor says. Because there was no mandate to have health insurance coverage, those who signed up tended to really need it, and healthy people did not enroll.

And so, "the prices went up and up," he says. And the premiums and enrollment "went down and down."

The state tried to address this in the early 2000s by introducing a "skinny" health plan, Cantor says.

"By that I mean very few benefits," he explains. "It covered very, very limited services."

The plan was affordable and really popular, especially among young and healthy people and about 100,000 people signed up. But if something did happen, or if a person had a chronic health need, lots of the costs shifted to the individual.

"It left people with huge financial exposure," he says.

That's, in part, why the ACA included a rule that insurance plans now have to offer good benefits and be available to everybody. In exchange, insurers have the mandate and subsidies — so that everybody will buy in.

Cantor says these experiences point to an ongoing dilemma in health care: A small portion of people consume a big chunk of health care costs. It's hard to predict who among us will cost a lot — or when. So, the question becomes, what kind of care should insurance plans cover and who should shoulder that cost?