Accessibility links
Bellvue's Prison Ward Is Home To 'Heartbreak And Hope,' Psychiatrist Finds : Shots - Health News Dr. Elizabeth Ford treated mentally ill inmates in New York City for more than a decade. It was almost universal, she says, that they had suffered abuse or significant neglect as children. 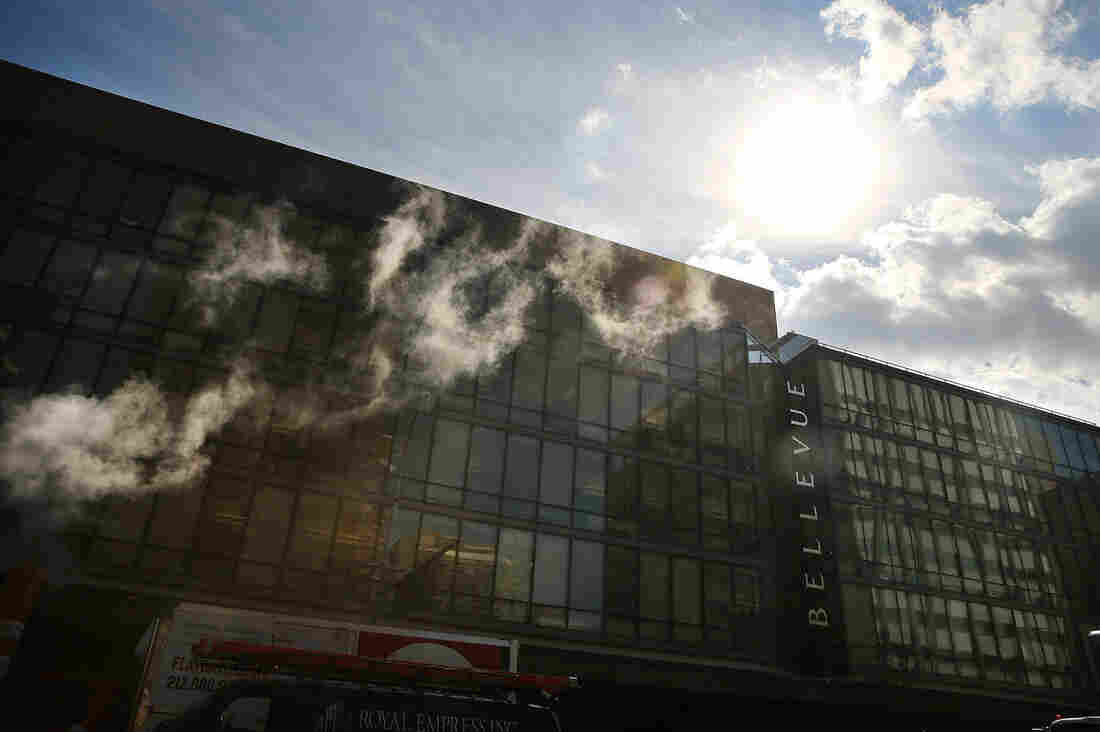 The inmates in Bellevue are awaiting trial for a variety of offenses, ranging from sleeping on the subway to murder. Spencer Platt/Getty Images hide caption 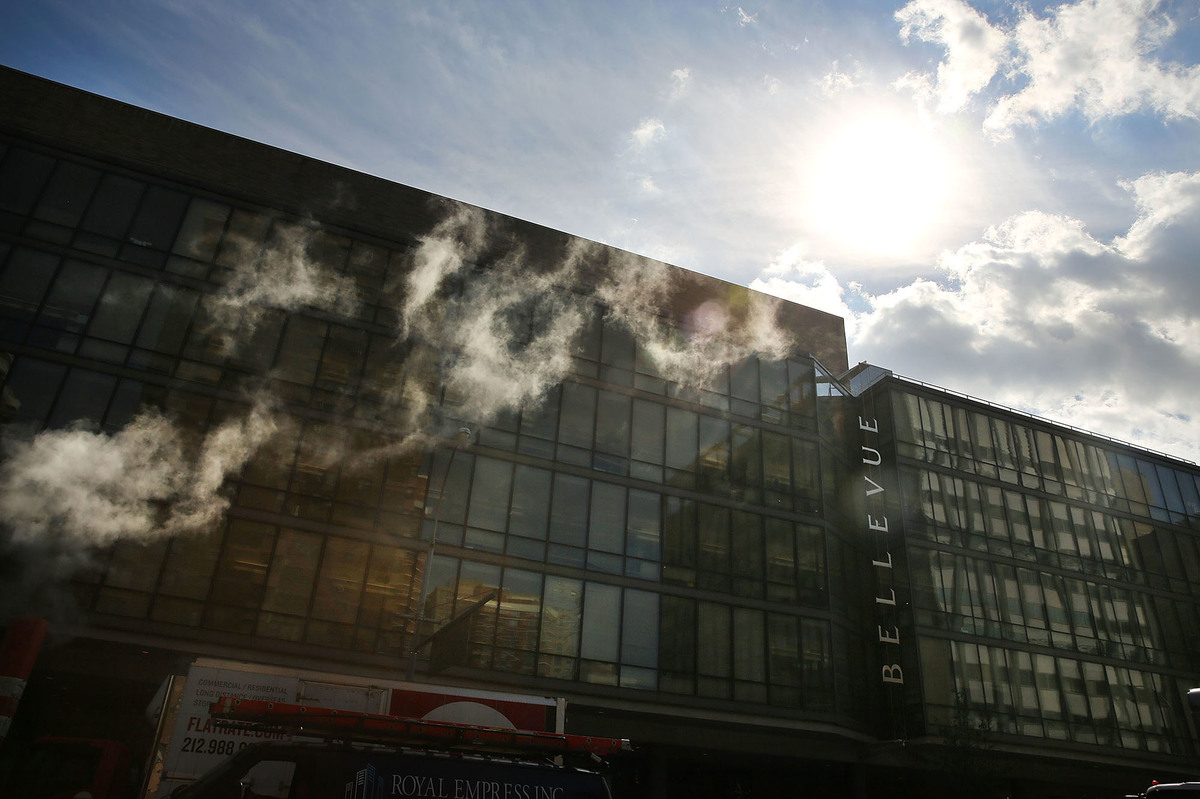 The inmates in Bellevue are awaiting trial for a variety of offenses, ranging from sleeping on the subway to murder.

When mentally ill inmates in New York City's Rikers Island jail become too sick, violent, delusional or suicidal for the jail to handle, they're sent to Bellevue Hospital Prison Ward for treatment.

The inmates in Bellevue are awaiting trial for a variety of offenses, ranging from sleeping on the subway to murder. But for Dr. Elizabeth Ford, a psychiatrist who treats them, the charges against her patients are secondary.

"My job is to try to look past that and ... to care for them, to be curious about them and to be non-judgmental," she says. "It is ... a daily struggle, but one that I have found over the years [to be] incredibly rewarding."

Ford began treating inmates at Bellevue in 2000 during an internship and eventually worked her way up to become director of the hospital's forensic psychiatric service. She revisits her experiences treating Rikers' inmates in her new memoir, Sometimes Amazing Things Happen.

"The type of symptoms and pathology that I saw and took care of during my time [at Bellevue] really shocked me," Ford says. "Of the patients I took care of, it was almost a universal experience that they have suffered abuse or significant neglect as children. I literally can't remember a patient for whom that didn't apply."

On hearing difficult and disturbing stories from patients 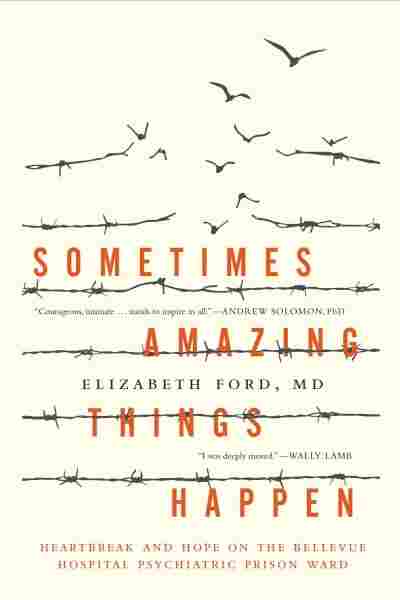 Heartbreak and Hope on the Bellevue Hospital Psychiatric Prison Ward

A patient talked in a group, for the first time really, about how his drinking behavior started when he was 8 years old, because he accidentally learned that if he drank when his father whipped him it didn't hurt as much. And that's where his alcohol problem started. So stories like that are really heartbreaking and gut-wrenching, and so I struggle with hearing those, but I've come to almost expect that every patient I take care of has some real abuse history. ...

I took care of many patients who had been accused of killing somebody. The most difficult ones for me were those who had been accused of killing a child, and that became particularly hard for me after I became pregnant and had my two children. But to listen to them talk — not necessarily about the crime, but about the feelings behind what led up to that, how they felt afterwards, and then the whole developmental trajectory that ... made it seem like it was inevitable it was going to happen — was very difficult.

On how many of her patients are neurodevelopmentally delayed

Increasingly I am noticing, in ways that I think I didn't appreciate early in my career, the numbers of people who are incarcerated who are neurodevelopmentally delayed and who don't have the education, or don't have the cognitive ability, to really navigate through this system.

The first thing I do — which is what I try to do for every patient, regardless of what's going on with them — is to sit, and be with them, and listen. And sometimes for patients, particularly who are neurodevelopmentally delayed, literally just being there for them, not running away, is the best thing that I can do. And then, when they settle, we can talk about how best to move forward.

On how to handle violent patients

Much of the violence was a result of patients feeling like they weren't having their needs met; they weren't being heard. Occasionally it had to do with their criminal-justice case, but there was a wide range of managing it, and we tried as best we could to start with the least forceful intervention. So talking to a patient, trying to understand — and if that didn't work, offering them medication, if that was appropriate. ...

Sometimes patients had to be locked in rooms — it's called seclusion — to keep themselves and others safe. And just like any other psychiatric hospital, for patients who were so extraordinarily violent that there was nothing else we could do, they did have to be restrained, which is not something any of us ever wanted to do, but sometimes happened. Over the course of my career I have definitely found that the first approach — listening to patients and really having patience with them — is by far the best approach. When patients are scared, they become violent. And if you can listen to them, the fear goes away.

One of the amazing things ... is that patients would come in and expect 'show any weakness and you'll be taken advantage of,' or 'share anything about your life and something bad will happen,' and I think what patients found, certainly what I found over the years, is that that was not always the case. In some instances you could find support where you didn't really expect it. ...

One of the biggest stressors of being in jail is that you are surrounded by people who you have not chosen to live with. You have officers telling you things that you need to be doing that you may not agree with, and you have health staff who sometimes are asking you to do things you don't want to do. But you're in an absolutely new community, and group therapy is a perfect petri dish to practice interacting and communicating with people that you don't know, some of whom you might be afraid of, some of whom you don't respect. ... I have found group therapy to be some of the best treatment in this kind of setting.

We've developed a model where patients are much safer. They take their medication much more frequently. Injury rates are down. And the officers and the health staff work very closely together. There's a very team-based approach to these units, and patients do well — as well as one can do in a jail setting. But patients do well in these units. We've reduced the need for hospitalization, and I think those things are a testament to what can be done, even in a setting that, I think, many people feel is hopeless. I don't see it that way. ...

There are ways for jails and prisons to be more rehabilitative and I think we can be all starting a conversation about that. The issue of punishment certainly comes up. From my perspective as a doctor I have found that positive reinforcement – that means praising someone or helping someone when they do good things, rather than punishing when they do bad things — is the best way to change behavior. So, I think the more that we can try to incorporate that into the mission of the work we do in the jails, the better.