Accessibility links
Being Part Of A Medical Study Can Be A Long, Slow Slog : Shots - Health News Brandie Jefferson volunteered for a clinical trial to see if intermittent fasting can help treat multiple sclerosis. Five months in, she realizes that this study won't answer that question. 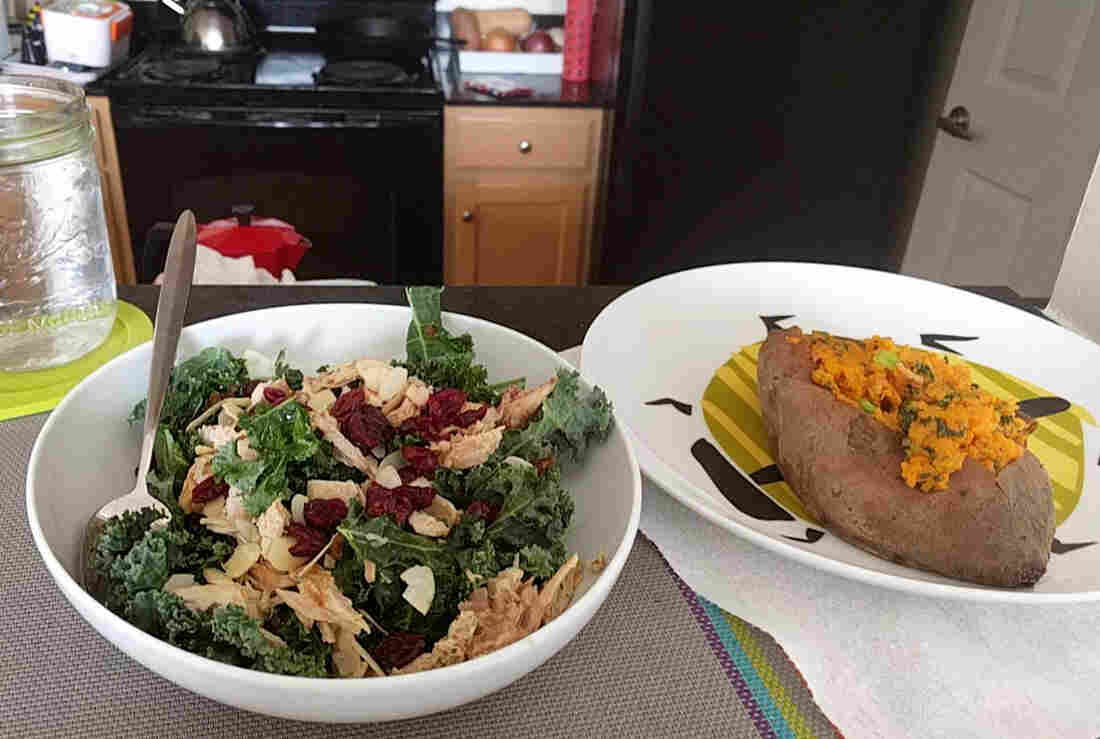 Here's a kale salad and sweet potato that did get their portraits taken in the name of medical research. Courtesy of Brandie Jefferson hide caption 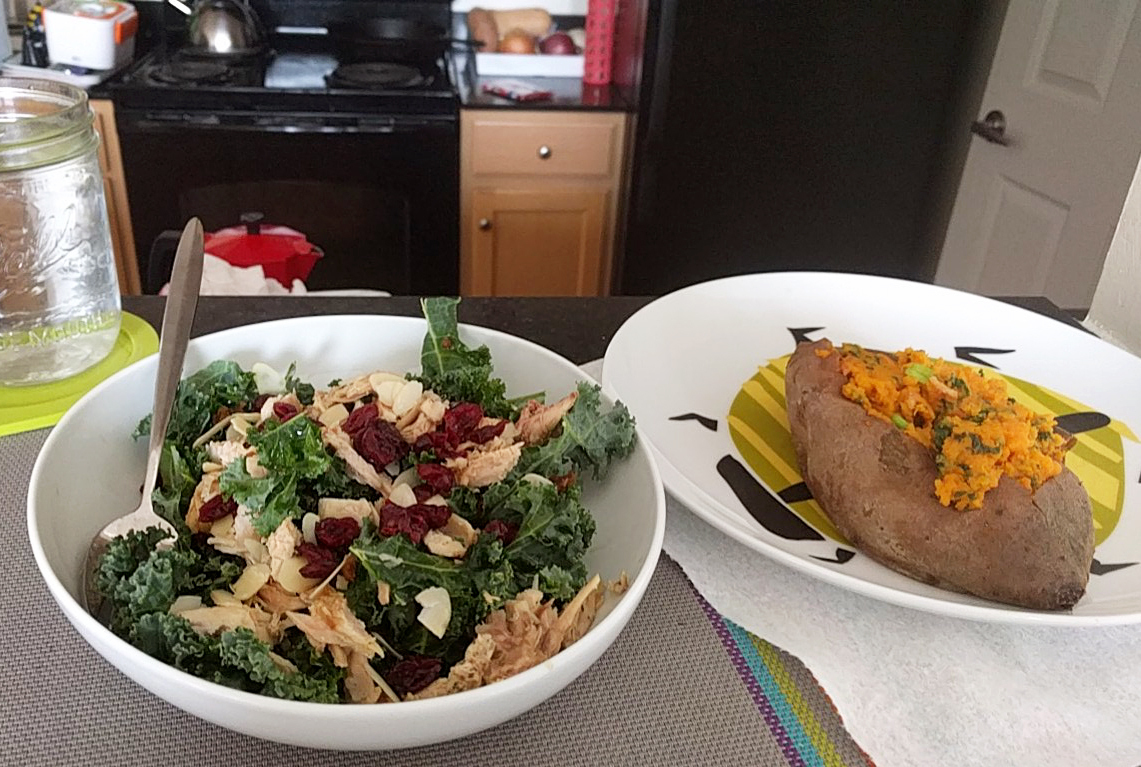 Here's a kale salad and sweet potato that did get their portraits taken in the name of medical research.

I've asked myself that question several mornings over the past few months as my stomach begins growling, usually after I smell popcorn in my coworker's office. He's on a strict 10 a.m. popcorn schedule that coincides with my strict 10 a.m. hunger pang schedule.

I am following an intermittent fasting program as part of a clinical trial for people with multiple sclerosis. For the past five months, I have tried to eat only between noon and 8 p.m., and am allowed only water, tea or coffee during the remaining 16 hours. 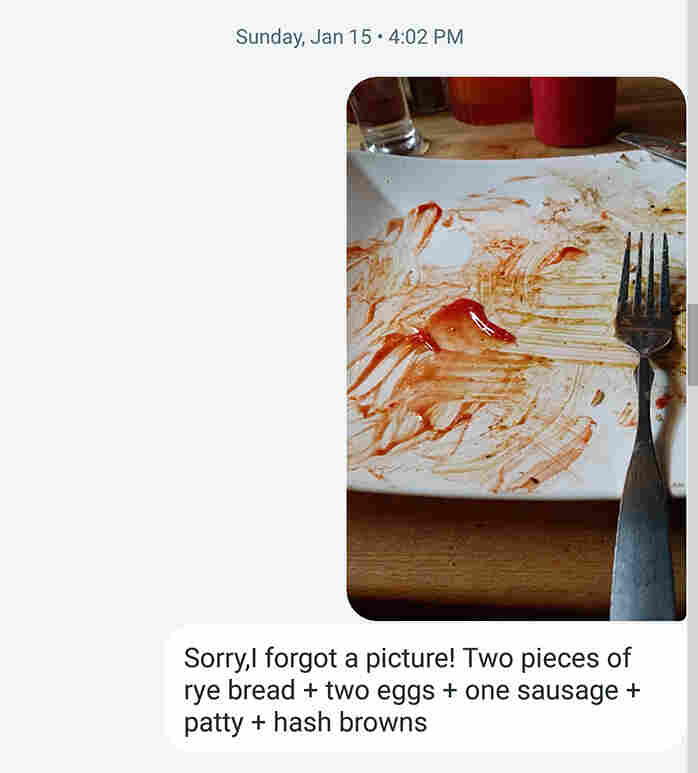 Brandie Jefferson was tasked with sending photos of what she ate two days a week to researchers. But it got harder to remember to do that before the food was gone. Courtesy of Brandie Jefferson hide caption 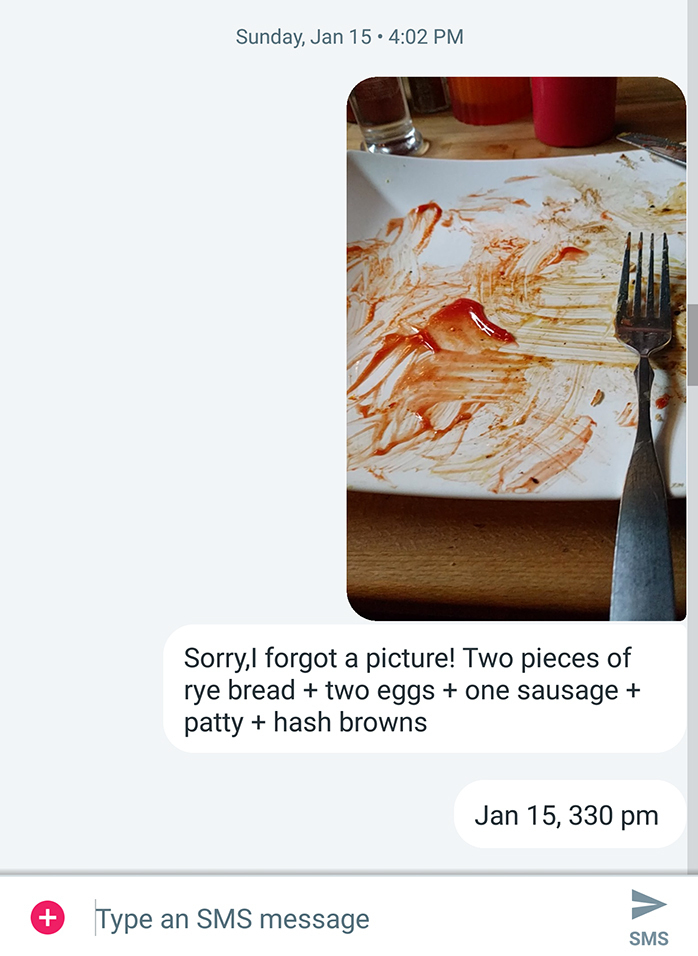 Brandie Jefferson was tasked with sending photos of what she ate two days a week to researchers. But it got harder to remember to do that before the food was gone.

It's part of a study at Johns Hopkins Medicine in which researchers are looking at bacteria in the guts of patients with multiple sclerosis to determine whether intermittent fasting changes the number, the types, or the functions of our bacteria. They're also looking to see if any of those changes affect inflammation and the symptoms we experience.

Scientists know that fasting can affect the microbiome, according to Dr. Ellen Mowry, associate professor of neurology and epidemiology at the Johns Hopkins University and lead researcher for the study. But they don't yet know now. Right now, researchers are simply trying to determine which dietary changes affect the microbiome and what the effects are. It's a complicated interplay of microbes, the human body, the environment and genetics.

The science is hard, yes, but so is the intermittent fasting!

Mowry said in an email that when she tries to fast along with participants, she has found it difficult to maintain. "But often for me," she says, "this is related more to my mental stamina rather than physical."

I agree. Over five months, it's been the same nearly every day — I do get a little hungry in the mornings, but I'm thinking about eating more often. I have only eaten any earlier than noon once or twice during the study, like the infamous O'Hare Airport incident when I just couldn't resist that bagel. I still have no regrets.

My slip-ups tend to be when I'm running late and eat after 8 p.m. I don't think I've screwed up enough to affect the tests, and I've been honest when it comes to food logging.

In a previous fasting study looking at calorie restriction, researchers had more to rely on than participants' word that they were following the diet. "We can predict the amount of weight people should lose in a given time period, so if they aren't doing it," Mowry says, "we can guess adherence isn't accurate."

But for this study, it's not so easy.

The biggest challenge is sample size — 54 people are enrolled in the study I'm doing. Some are fasting, some are on a restricted calorie diet; and some are in the control group, doing nothing different. "The studies are too small to be certain that any change in symptoms is related to the intervention," Mowry says. She wants to do larger studies, but finding funding for dietary studies is difficult.

Also, self-reporting isn't always the most accurate way to get data. Mowry says ideally participants would log meals during food recalls every 24 hours with trained professionals. In other words, I would go in on a Tuesday and tell someone what I ate and drank on Monday. I would explain how food was prepared, how much I ate and drank, and so on.

This isn't easy to do because, again, money. There's just not enough to hire the professionals needed.

Instead of food recalls, we intermittent fasters text pictures twice a week of what we ate and drank that day. As I entered the final few months of the study, I found myself forgetting more and more to take the pictures before I eat. I have sent more than one photo of a mostly-empty plate with the note, "Sorry! I forgot to snap a picture."

I was entering a period of fasting fatigue. Obviously, I needed to get pumped again. So I set up a Google Alert for "microbiome." I cozied up with Ed Yong's book I Contain Multitudes, about the human microbiome, before bed every night — I highly recommend it. 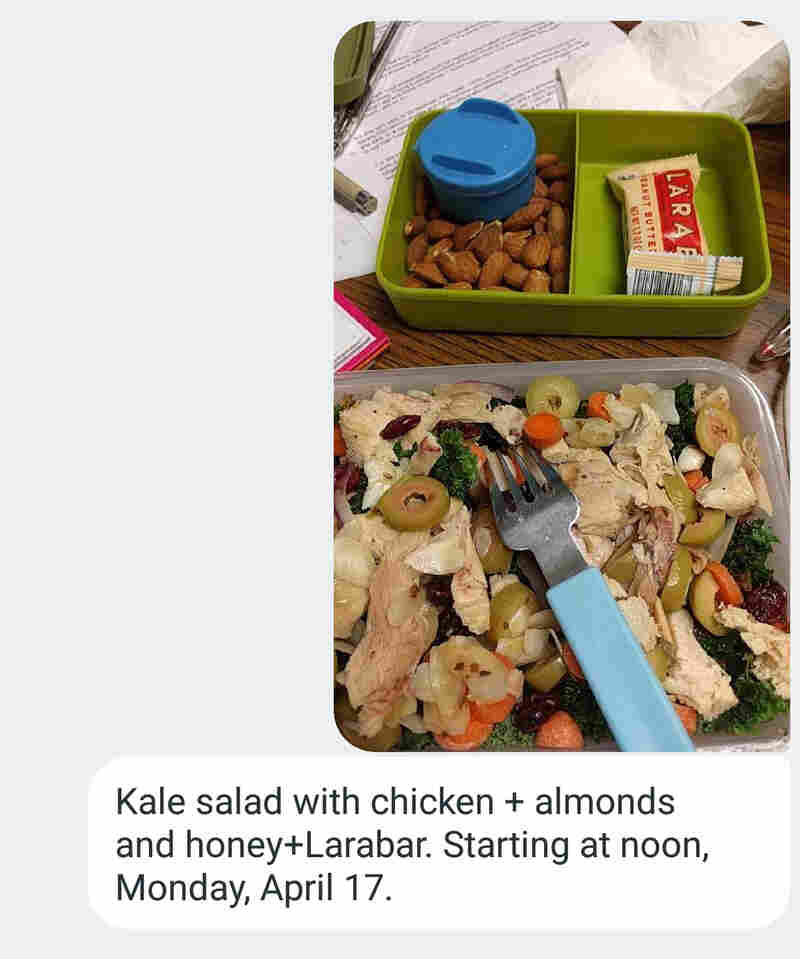 Jefferson acknowledges that self-reporting, like meal logging, isn't always the most accurate way to get data. Courtesy of Brandie Jefferson hide caption 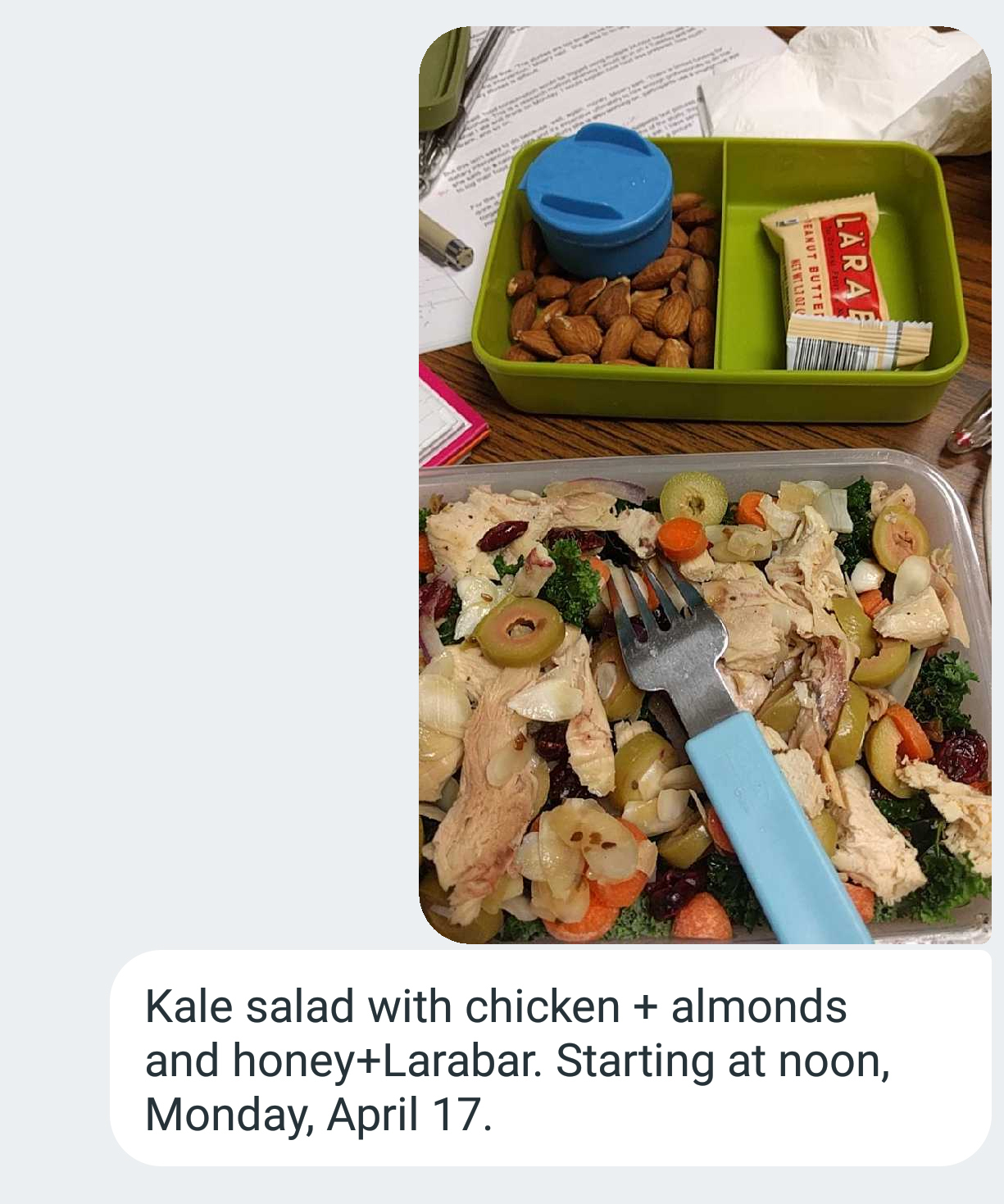 Jefferson acknowledges that self-reporting, like meal logging, isn't always the most accurate way to get data.

I got sucked into thousands of journal articles, skimming everything from "Role of the Gut Microbiome in Obesity and Diabetes Mellitus" in Nutrition in Clinical Practice to "HOW RESEARCH INTO THE MICROBIOME CAN BE USED TO SOLVE CRIMES" in the Southern California Interdisciplinary Law Journal. (I have no idea why the title was in all caps, but I took that as a sign I should read it.)

If I decide to continue with intermittent fasting once the study is over, new motivation may come in the form of results from a previous study that Mowry will present this fall. The results should show if calorie restriction or a more extreme form of intermittent fasting called 5:2 fasting affect metabolism and how they affect the microbiome.

The thing is, I'm not sure if I want to continue. In the beginning, my boyfriend, who is particularly observant and good at catching subtle changes that I may not notice, said I seemed to have a bit more energy and was not complaining (my word, not his!) about pain as often. And fasting has been a good way to maintain my weight.

But a few months ago, my MS symptoms seemed to be worsening. This could be for a couple of reasons, but the big one is likely stress. Finishing my thesis, working, freelancing, gymming ... things reached a frenzied pace, and my pain levels skyrocketed.

So did intermittent fasting help? A little, maybe? Not at all? The jury is still out, and it will likely end in deadlock. There are too many factors for me to consider.

In about a month I'll return to the doctor with a stool sample and leave with permission to eat breakfast again. If I decide to keep up the fasting, at least I won't have the pressure of worrying that my slip-ups might compromise the work that Dr. Mowry, Research Study Coordinator Sam Roman and others have put into trying to help me and the estimated 2.5 million worldwide who have multiple sclerosis.

And if I feel a pang of guilt if I want cream in my morning coffee — or heck, maybe I want breakfast! — I'll just remember what Mowry told me: "It can't be a totally inflexible diet plan; otherwise, it definitely won't be sustainable."

Brandie Michelle Jefferson is a communications manager and freelance reporter who loves a good science story. She's on Twitter, too: @b_m_jefferson.