Accessibility links
NIH Launches Study Of Illness Known as 'Chronic Fatigue Syndrome' : Shots - Health News Researchers do not know what causes people with the condition now known as ME/CFS to suffer debilitating exhaustion and other symptoms that make many everyday activities all but impossible. 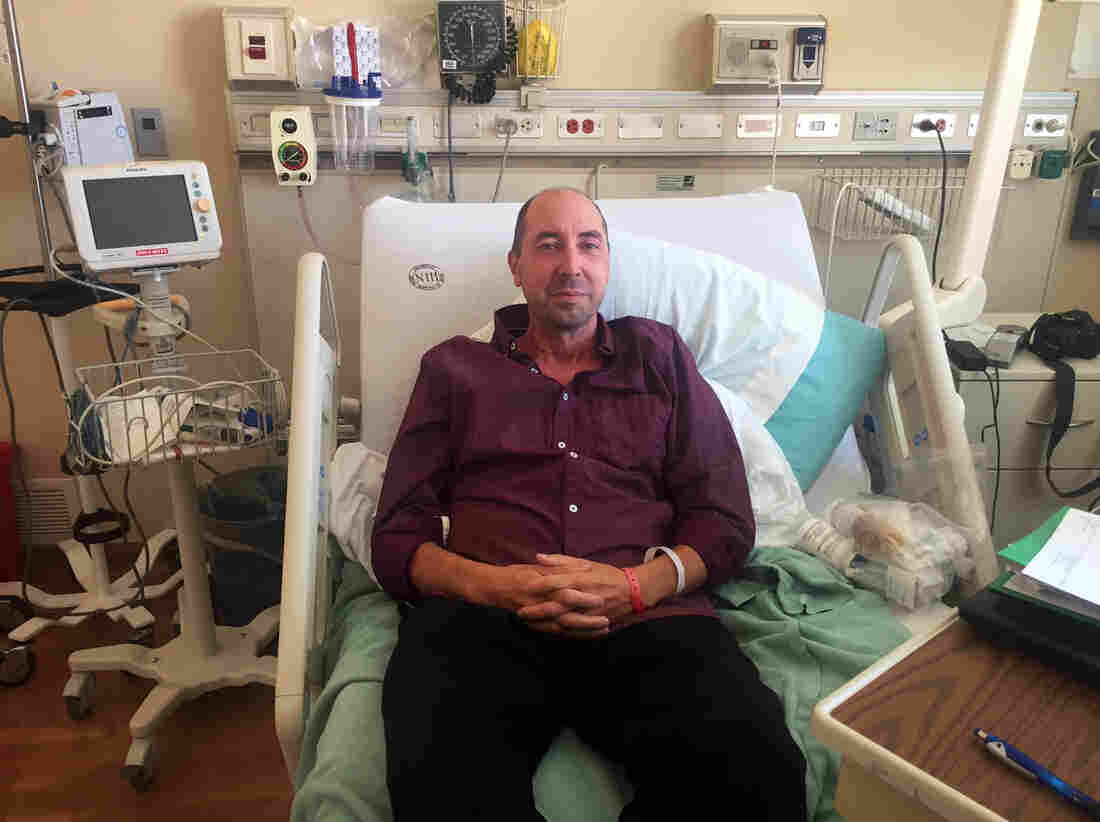 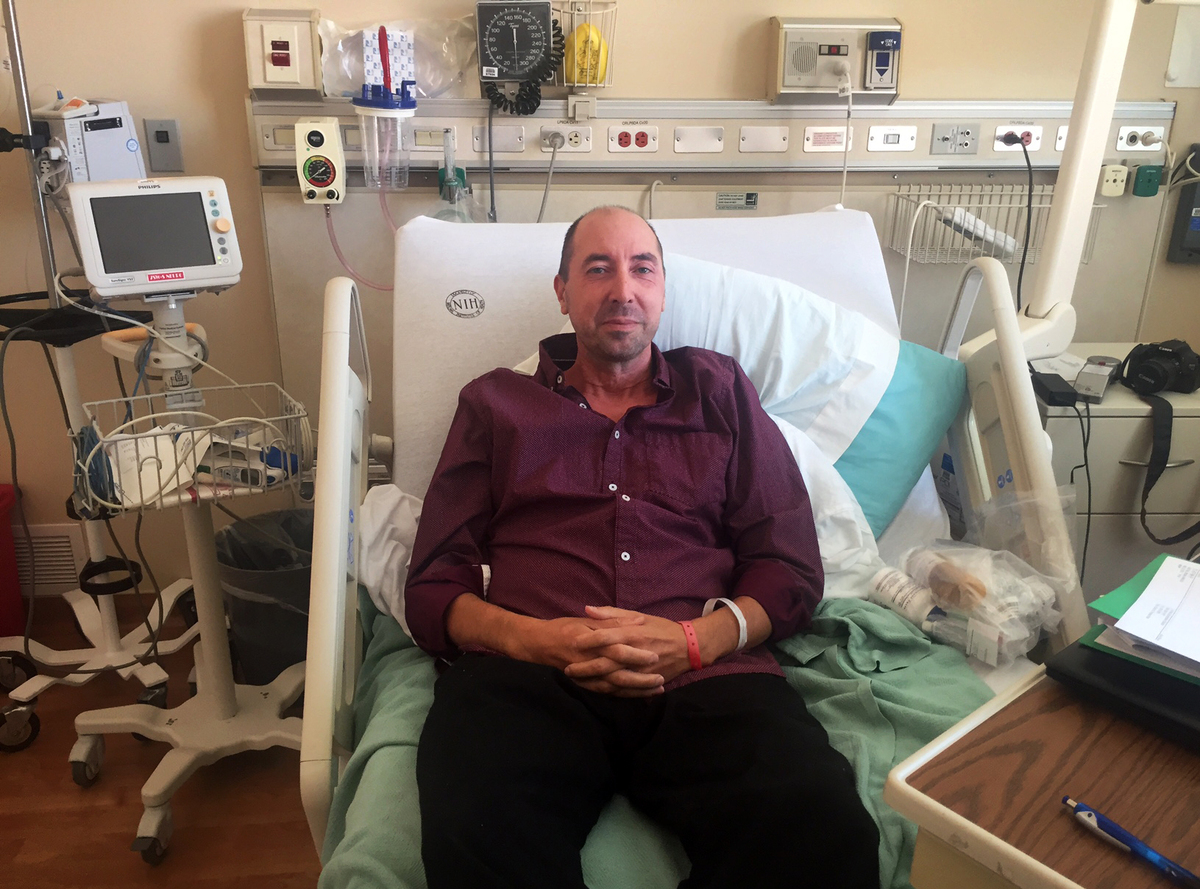 In July 2012, a science reporter for The Washington Post, Brian Vastag, was in Wisconsin visiting his family when a high fever hit. He became instantly bedridden with flu-like symptoms that never went away.

"It didn't feel like anything I'd ever had before. ... The things that distinguished it were the dizziness and the feeling of unreality in the head," Vastag says.

Now, nearly five years later, the 45-year-old can no longer concentrate or read even a few sentences without becoming exhausted. A short walk to the mailbox means lying down for the rest of the day. In September, he'll qualify for Medicare owing to his disability.

That level of severity isn't the picture most people — including physicians — think of when they hear the term "chronic fatigue syndrome." But that was the diagnosis Vastag finally received after 18 months of visiting numerous doctors, submitting countless vials of blood and initially being misdiagnosed with West Nile virus.

Actually, Vastag's condition is now termed "myalgic encephalomyelitis/chronic fatigue syndrome," or ME/CFS for short, and is estimated to affect at least 1 million people in the U.S. alone. Many with the condition dislike the name "chronic fatigue syndrome" because they feel it's trivializing and misleading, giving the impression that they're simply tired or depressed when in fact many are quite ill.

Nailing down the cause — or, more likely, causes — of the illness has proved exceptionally difficult, since patients' symptoms vary tremendously. Routine laboratory tests are often negative, but even when they detect abnormalities, those are usually not specific enough to be helpful. Vastag had even seen a neurologist who performed MRI, which many patients don't receive. That test showed lesions in his brain and inflammation in his spine that the neurologist labeled "myelitis," but the neurologist couldn't make the ME/CFS diagnosis based on just that.

Further complicating the picture, some people who have been labeled with chronic fatigue syndrome actually have other conditions causing their symptoms, which can include muscle pain, dizziness, "brain fog" and gastrointestinal problems in addition to the flu-like symptoms.

Now, Vastag is participating in an in-house study at the National Institutes of Health, where researchers are using state-of-the-art equipment to conduct sophisticated testing they hope will explain the mysterious illness.

The study's lead investigator is neuroimmunologist Dr. Avindra Nath, chief of the Section of Infections of the Nervous System and clinical director of the National Institute of Neurological Disorders and Stroke. Prior to joining NIH in 2011, Nath ran a multiple sclerosis clinic, where he evaluated many ME/CFS patients to rule out MS, which can cause similar symptoms. That's where his interest in ME/CFS began, he says.

"I became comfortable that, 'Yes, they do have a real story that's very convincing' ... but [when you run the usual tests] you don't find anything. That made me feel that it's probably worth pursuing further," he says. "NIH is probably the best place to be able to do that because we have a lot of tools available to study a small population in great depth."

The first phase of the study includes 40 people with ME/CFS, as well as 20 who previously had Lyme disease and another 20 healthy controls. The participants are undergoing a huge battery of tests, including sleep studies, different types of MRI scans and very detailed metabolomics and proteomics, which are studies aimed at identifying the functions of genes. Subjects will also receive immunological testing on all biological fluids and extensive testing following an exercise challenge, when ME/CFS symptoms become most pronounced.

The current hypothesis, Nath says, is that, in contrast to people with normal immune systems that act to quell an infection and then subside, there is "a subset of individuals whose immune systems overreact and do a lot of collateral damage."

Who has the illness?

One of the study's biggest challenges came at the very beginning: identifying the subjects. The investigators decided to start by selecting only people whose illness began like Vastag's, with a sudden, severe infection confirmed by a doctor. The exact type of infection need not be known, though. Vastag's wasn't, even though he had seen an infectious disease specialist who confirmed his illness.

Indeed, Nath says the current thinking is that there are probably many possible triggers as opposed to one single virus or other infectious cause. "We think it's unlikely there's persistent infection going. Our hypothesis is that there's an infectious process that triggers it, and after that the infection is gone but the symptoms persist."

Another study requirement is that patients have been sick less than five years, since those who have been sick longer tend to develop other health problems due to inactivity.

And, importantly, those enrolled had to meet strict criteria for ME/CFS, with the key symptom being the hallmark "crash," like the ones Vastag routinely experiences after even mild activity. The scientific term for that, "post-exertional malaise," is a central part of recent ME/CFS definitions, including one devised for clinical use by the Institute of Medicine in early 2015. For this study, Nath and colleagues are using an older research definition that also requires patients to have PEM along with several other physical symptoms.

"The problem is, if you can't really have objective evidence [of the illness], it becomes very hard to identify the population. ... So, we decided to have very rigorous criteria," Nath says.

The first study phase, which will last about three to five years, is aimed at finding biological "markers" for the illness. Then, in a planned second phase, Nath and his team would use that information to identify a larger population and repeat the studies for confirmation. Finally, in a third phase, they would try interventions to see if patients' symptoms improve. "That would bring everything full circle," Nath says.

This isn't the first study with those aims, and progress has been made by others in identifying biological markers for ME/CFS. Preliminary studies have also found some success with certain treatments, including anti-virals when used early in the disease course and very potent immune system drugs used to treat cancer.

But Nath points out that most of the previous studies have been small and haven't been repeated by other research groups. "We want to keep an open mind, and not bias ourselves," he says. "We're looking at a very broad panel."

"It was a dream job"

In July 2015, three years after he first fell ill, Vastag wrote an open letter published in The Washington Post and addressed to NIH Director Francis Collins, asking for more funding for ME/CFS research. At that point, just $5 million to $6 million had been allotted. In October 2015, Collins announced the in-house study as well as other funding initiatives.

Now, Collins says in a statement provided to NPR:

"We are making significant progress toward increasing our focus on ME/CFS research. Funding for this disease in 2017 could reach $12 million, a major increase from last year, but a lot depends on the overall budget situation and the number of meritorious proposals we receive. I am delighted that our intensive study of individuals with post-infectious ME/CFS is now underway at the NIH Clinical Center."

Vastag believes the study may well find at least a mechanism for his symptoms, if not the underlying cause. "You have to start by understanding what's gone wrong and the study is designed in a really good way to do that," he says.

But the findings won't immediately resolve his current situation, which includes a lawsuit against the insurance company Prudential for denying his disability claims. Although Vastag pushed on at The Washington Post for a couple of years after he became ill, he finally had to leave in 2013. During his tenure there, he had covered all kinds of science subjects, from the 2011 Japanese earthquake to U.S. hurricanes to parrot conservation in Qatar.

"It was a dream job," he says, tearing up. "I didn't give up that job until I was almost paralyzed, until I couldn't move. It was a job I'd spent 15 years working toward and I loved every minute of it."

He now lives in Hawaii, in part because of his intolerance to Washington's cold winters and also because his girlfriend, who also has ME/CFS, was living there when he met her online. And, he says, "Hawaii is a very calm, beautiful environment. One thing I can still do is sit in my backyard and enjoy nature."

Miriam E. Tucker is a freelance journalist specializing in medicine and health. You can follow her on Twitter: @MiriamETucker

A previous version of this story incorrectly referred to the year Brian Vastag left The Washington Post. He ceased to be an employee of the newspaper in 2013, not 2015.