Accessibility links
Hospitals Offer Urgent Care Tailored For Cancer Patients : Shots - Health News Some hospitals and oncology practices are setting up urgent care sites tailored to the needs of cancer patients, to help keep them out of the emergency room when complications or side effects arise. 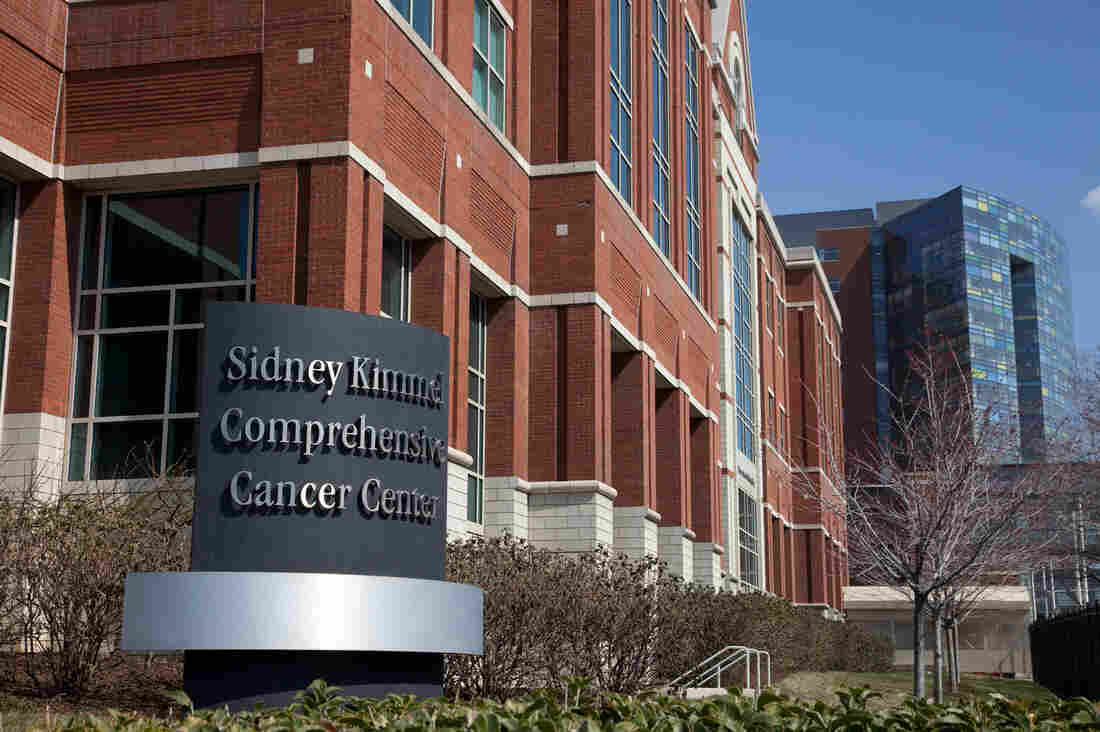 Johns Hopkins Hospital in Baltimore opened a six-bed urgent care center next to its infusion center a couple of years ago. Of the patients who land there, about 80 percent are discharged home afterward, rather than needing admission to the hospital. Courtesy of Johns Hopkins Medicine hide caption 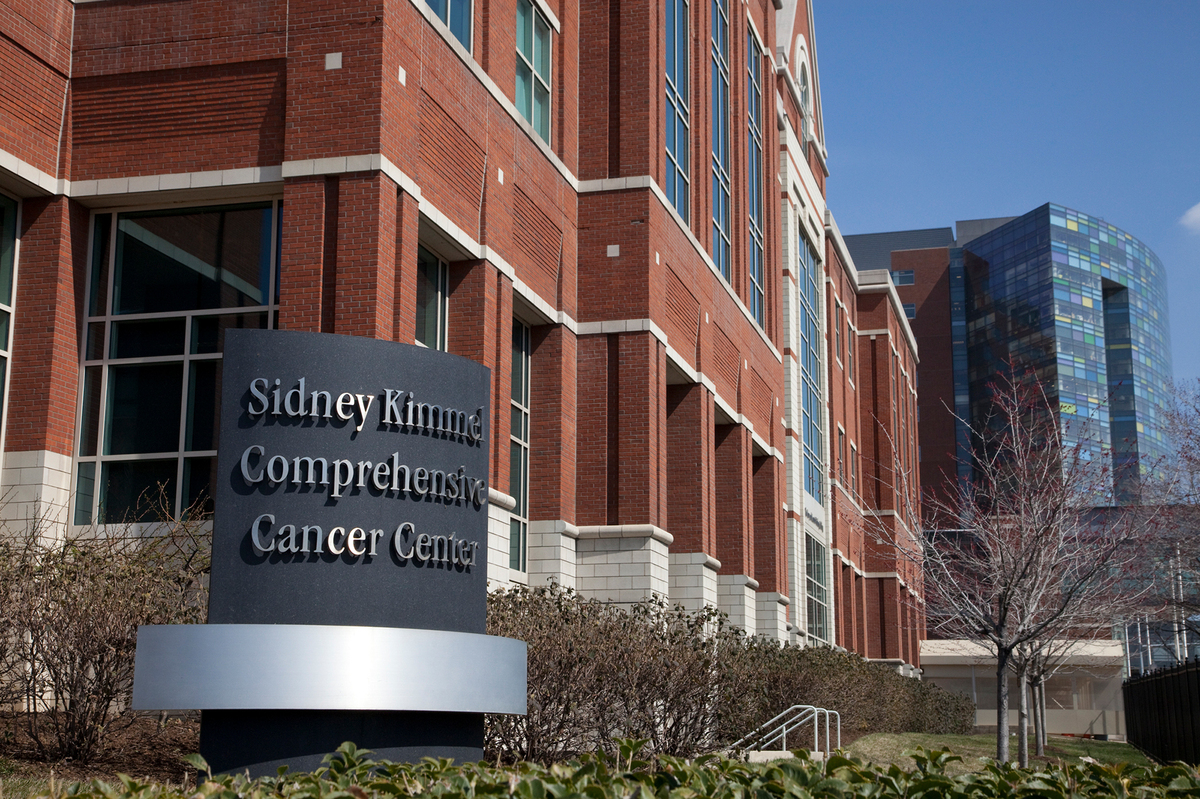 Johns Hopkins Hospital in Baltimore opened a six-bed urgent care center next to its infusion center a couple of years ago. Of the patients who land there, about 80 percent are discharged home afterward, rather than needing admission to the hospital.

On an afternoon a few weeks ago, Faithe Craig noticed that her temperature had spiked to just above 100 degrees F. For most people, the change might not be cause for alarm, but Craig is being treated for stage 3 breast cancer, and any temperature change could signal a serious problem.

She called her nurse at the hospital clinic where she gets care, at the University of Texas Southwestern Medical Center in Dallas, who told her to come in immediately for cancer urgent-care services at the hospital's hematology oncology clinic.

"I thought I'd be waiting there all night," said Craig, a 33-year-old teacher and single mother. But the hospital had already lined up a blood draw before she arrived and then sent her directly to get X-rays.

Clinicians had details of her cancer care at their fingertips. "They already knew my story and knew everything about me," she said. The blood work showed she had severe anemia, requiring a blood transfusion, pronto.

It's been more than a year since the medical center began providing same-day urgent care services to cancer patients, with the aim of helping them avoid the emergency department and hospital admissions, said Dr. Thomas Froehlich, medical director of the all the center's cancer clinics.

Cancer treatment "clearly carries a lot of side effects and toxicity, and there are also complications of dealing with the cancer," Froehlich said. "Many of these things, if you can intervene early, you keep patients at home and out of the hospital."

UT Southwestern isn't alone. A small but growing number of hospitals and oncology practices are incorporating urgent care aimed specifically at cancer patients, in which specialists are available for same-day appointments, often with extended hours, sometimes 24/7.

Keeping cancer patients out of the ER makes sense, not only because many of them have compromised immune systems that put them at risk in a waiting room full of sick people, but to provide the most efficient and appropriate care.

"What we hear from cancer physicians and administrators is that in the emergency department not all emergency physicians and nurses feel equally confident in their ability to treat cancer patients," said Lindsay Conway, managing director of research at the Advisory Board, a health care research and consulting firm. "So they may admit them when it's not necessary."

Severe pain, nausea, fever and dehydration are not uncommon side effects of traditional chemotherapy. Newer immunotherapy treatments that activate the immune system to fight cancer can cause serious and sudden reactions if the body instead attacks healthy organs and tissues.

It can be difficult for non-cancer specialists to evaluate what these symptoms mean. "Targeted therapies are wonderful, but if you don't know the drug, you're going to have a hard time managing the person," said Dr. Barbara McAneny, CEO of New Mexico Oncology Hematology Consultants in Albuquerque, which operates three cancer centers in New Mexico that together provide same-day urgent care services to more than a dozen cancer patients daily.

"There's a general sense within the practice of oncology that we need to do a better job of managing pain and side effects, and we need to provide a higher level of care," Lichtenfeld said.

The federal Centers for Medicare & Medicaid Services is encouraging these efforts through new payment and delivery models designed to reward high quality cancer care, Lichtenfeld said. In addition, starting in 2020, hospitals may be penalized financially if patients who are receiving outpatient chemotherapy visit the emergency department or are admitted to the hospital, according to a final rule issued in November.

Avoiding the emergency department makes financial sense for patients and insurers, too.

Johns Hopkins Hospital opened a six-bed urgent care center next to its infusion center a couple of years ago. Of the patients who land there, about 80 percent are discharged home, at an average total hospital charge of $1,600, said Sharon Krumm, director of nursing administration at Johns Hopkins Kimmel Cancer Center. (The patient and the insurer would divvy up that charge based on the patient's insurance coverage.)

In contrast, only 20 percent of cancer patients who visit the hospital's emergency department are discharged home, Krumm says. Those who are have an average total hospital charge of $2,300. The others face the ER charges plus the hefty cost of a hospital admission.

Rebecca Cohen has been a frequent visitor to the Johns Hopkins urgent care center. Diagnosed more than two years ago with stage 4 lung cancer, the Baltimore resident is 68 and receiving immunotherapy. Since her diagnosis, Cohen periodically has needed to be treated or checked for dehydration, electrolyte abnormalities, low hemoglobin, low sodium, blood clots and infection, among other things.

Before she started going to the cancer urgent care center, Cohen said, she used to have to sit "in the waiting room at the emergency room with people who had the most extraordinary diseases. Having stage 4 lung cancer, the thought of being exposed to pneumonia or bronchitis is more than scary."