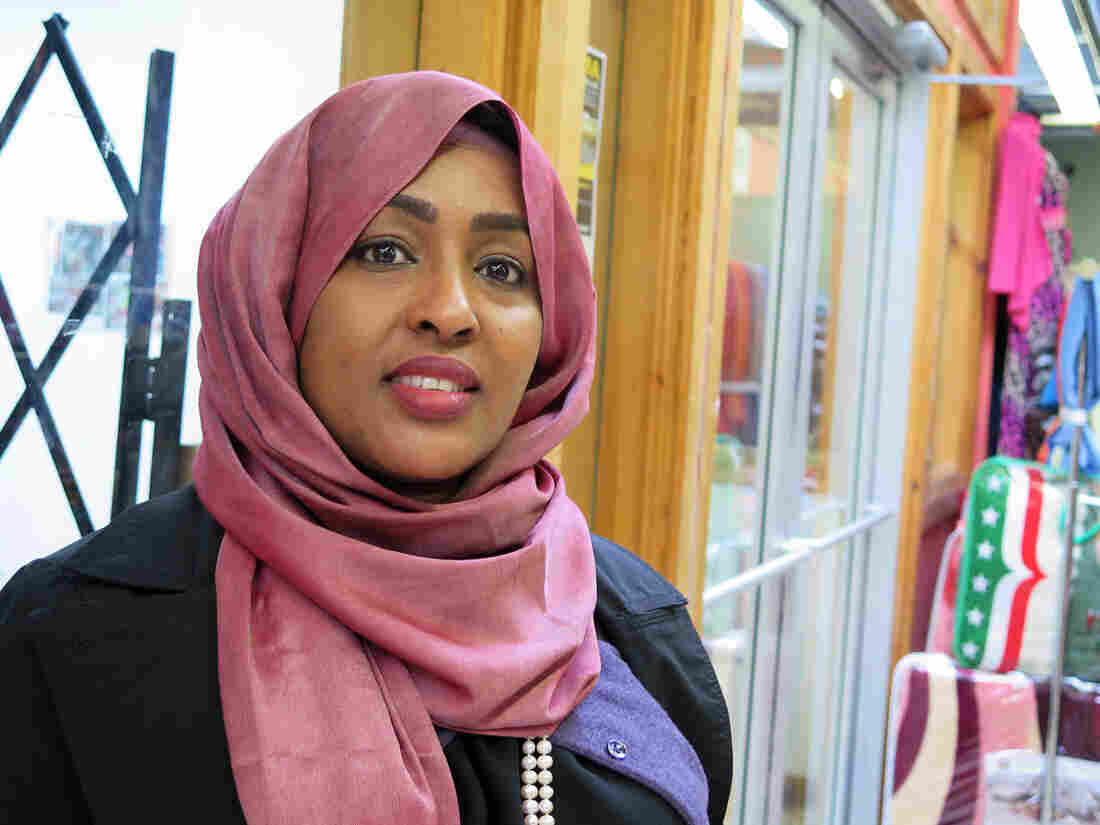 Khadra Abdulle, a resident of St. Paul, stops to shop at the Riverside Market in the Cedar-Riverside neighborhood of Minneapolis. It's the inaccurate information about a link between vaccines and autism, she says, that's keeping some well-meaning parents from getting their kids vaccinated against measles. Mark Zdechlik/MPR hide caption 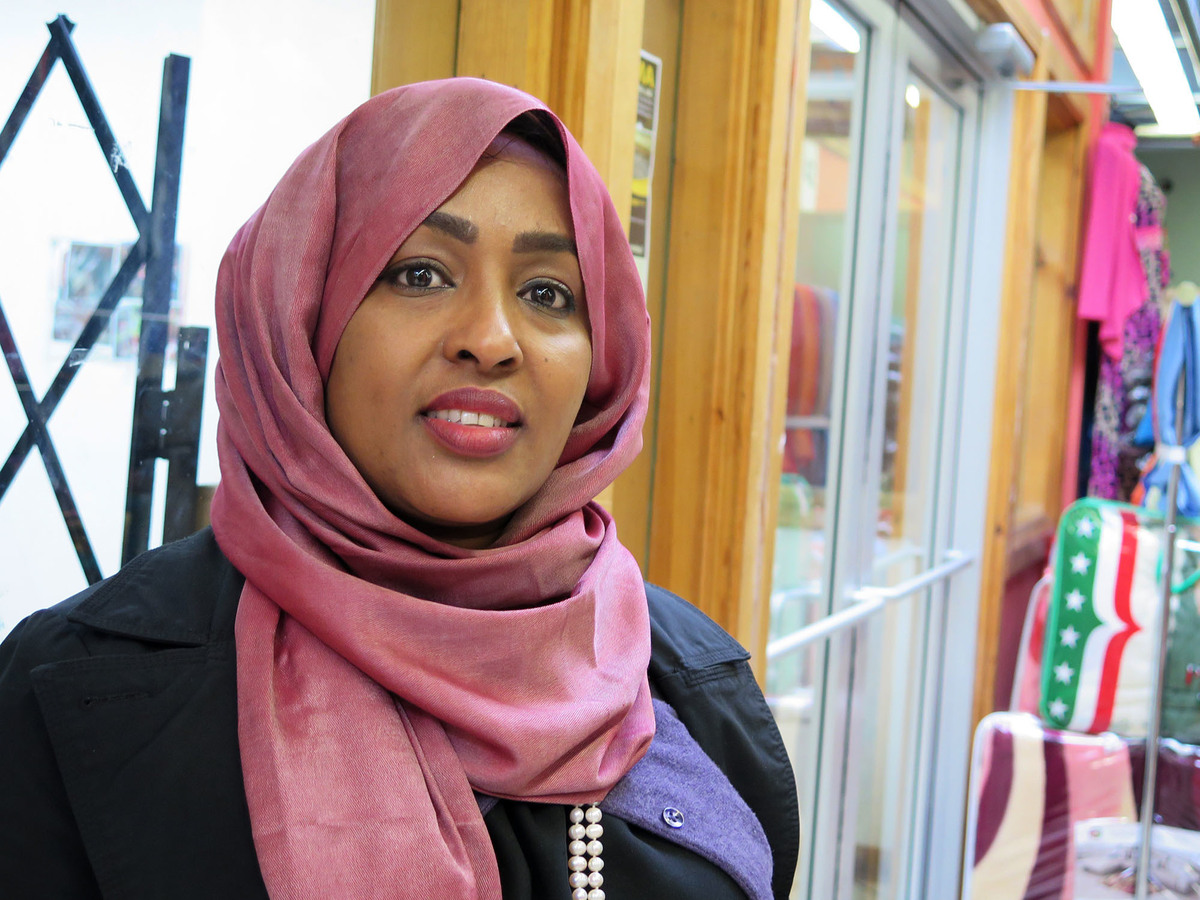 Khadra Abdulle, a resident of St. Paul, stops to shop at the Riverside Market in the Cedar-Riverside neighborhood of Minneapolis. It's the inaccurate information about a link between vaccines and autism, she says, that's keeping some well-meaning parents from getting their kids vaccinated against measles.

Health officials in Minnesota have been scrambling to contain a measles outbreak that has sickened primarily Somali-American children in the state. So far health officials have identified 34 cases, still mostly in Hennepin County, and they're worried there will be more.

In Minnesota, the vast majority of kids under two get vaccinated against measles. But state health officials say most Somali-American 2-year-olds have not had the vaccine — about six out of ten. As the outbreak spreads, that statistic worries health officials, including Michael Osterholm, who directs the University of Minnesota's Center for Infectious Disease Research and Policy.

"It is a highly concentrated number of unvaccinated people," he says. "It is a potential kind of gas-and-match situation."

Measles is a highly contagious respiratory disease that causes a rash and fever. It can be deadly, but the Centers for Disease Control and Prevention says two doses of vaccination are about 97 percent effective in heading off the disease.

The Minnesota Department of Health says the outbreak began in Hennepin County, home to Minneapolis and the heart of the nation's Somali-American community.

Somali-American leaders here are in firm agreement with the Minnesota health department in trying to knock down the pseudoscience behind the unfounded claims that getting vaccinated can lead to autism. But anti-vaccine groups have been quick to fan fears, even as the outbreak spreads.

A social and commercial hub of the community is the Cedar-Riverside neighborhood, adjacent to downtown Minneapolis. Inside a building called the Riverside mall, more than a dozen stalls are tightly clustered, open-air style.

Sprawling from stall to stall are brightly-colored clothes and other textiles along with small home furnishings. Most of the Somali-Americans shopping here want nothing to do with a reporter's questions. But Khadra Abdulle offers her thoughts about the measles outbreak.

"I heard [about] it," she says, "but I haven't seen it. I don't know anybody who has that problem right now."

She's quick to name the fear that's working against the measles vaccine among Somali-Americans.

"They believe it causes autism."

A weekend meeting in Minneapolis, organized by anti-vaccine groups (the Vaccine Safety Council of Minnesota, the Minnesota Natural Health Coalition, the National Health Freedom Action and Minnesota Vaccine Freedom Coalition and The Organic Consumers Association) attracted dozens of Somali-Americans. Some members of the audience shouted down physicians — including pediatrician Dr. Stacene Maroushek — who showed up to try to convince them vaccination is crucial.

"We know If there's less than a certain rate of vaccination, the virus is much more likely to spread," she told the gathering. "That's a scientific fact."

Kris Ehresmann, the infectious disease division director at the Minnesota Department of Health, describes the Minnesota measles outbreak as a "public health nightmare" — a lot of unvaccinated people, living in densely populated neighborhoods and a tremendously contagious disease.

Ehresmann says she's beyond frustrated with the dis-information campaign by anti-vaccine advocates, who have been working against efforts to contain the outbreak.

"I'll be honest. It makes me very angry," she says.

But Ehresmann says the desire to get the truth out is mobilizing public health officials.

"We've had people on Somali TV, Somali radio. We've participated in chat rooms. The commissioner met with imams to talk to them about how we can work with the faith community to do outreach," she says.

In 2000, U.S. public health officials declared that measles had been eliminated in the U.S., thanks to a strong vaccination program. That means measles is no longer native to the U.S., but as vaccination rates have eroded in some areas, it can spread quickly if a sick traveler brings it in.

In 2014, there were 667 cases in the U.S., including a large outbreak among Amish communities in Ohio. In 2015, there were 188 cases, including some linked to an outbreak that started at the Disneyland amusement park. Prior vaccination is critical to keeping people from contracting the virus if they are exposed to it.

Almost 30 years ago measles sickened 460 people in Minnesota and three children died in that outbreak. Osterholm served as the state epidemiologist at the time, and says those deaths still haunt him. He's worried it could happen again.

"I think we could surely see a major increase in the number of cases beyond what we have now," he says. "With that comes the increasing likelihood someone will die."

This story is part of a reporting partnership with NPR, Minnesota Public Radio and Kaiser Health News.