Accessibility links
Measuring Drug Impairment In Drivers Easier Said Than Done : Shots - Health News A report on the potential influence of alcohol or drug impairment on traffic fatalities points to the difficulty of comparing alcohol impairment standards to other drugs. 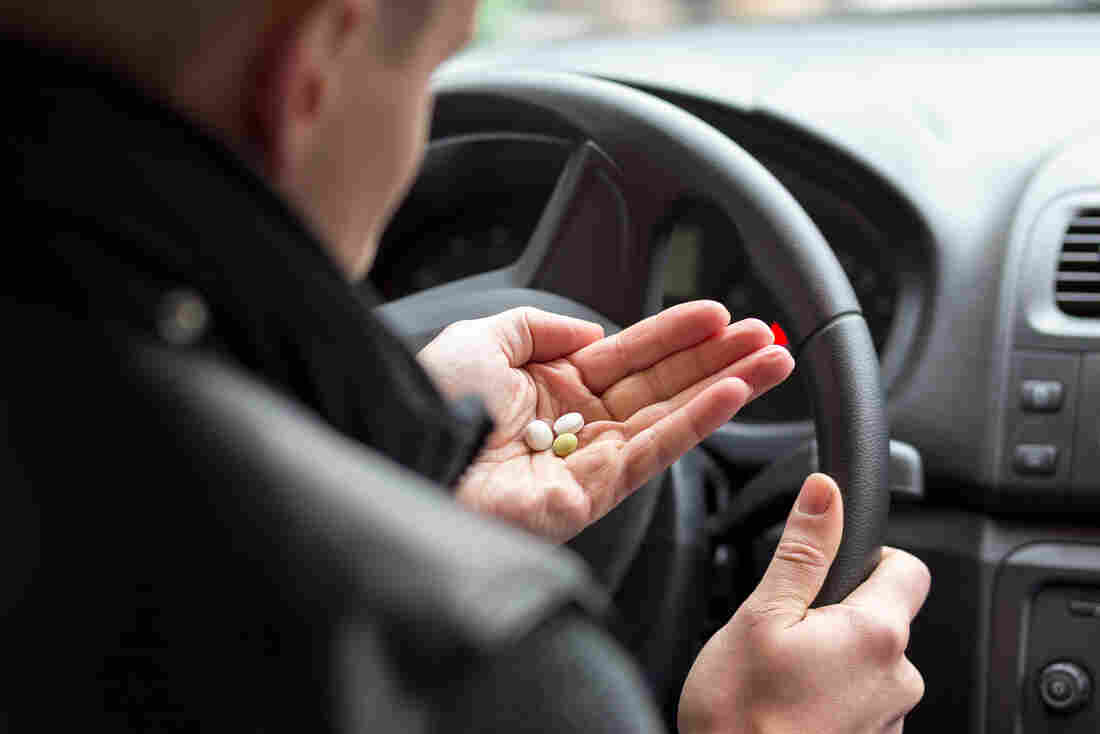 Public safety experts and advocates disagree about what conclusions can be drawn from data on the presence of alcohol or other drugs in the bodies of people involved in deadly crashes. juefraphoto/Getty Images/iStockphoto hide caption 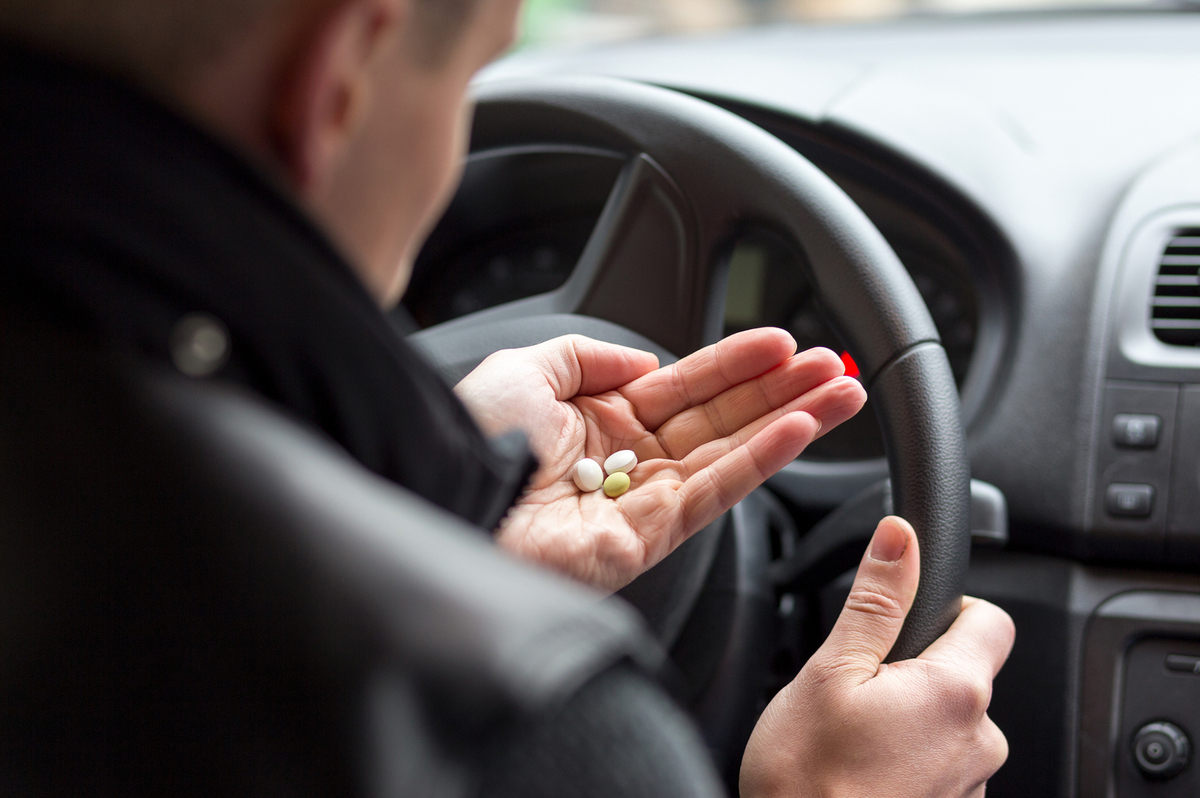 Public safety experts and advocates disagree about what conclusions can be drawn from data on the presence of alcohol or other drugs in the bodies of people involved in deadly crashes.

Drug-impaired driving is a growing concern for highway safety officials. But, as a recent report makes clear, its actual impact is still difficult to measure.

The report from the Governors Highway Safety Association, a group of state highway safety offices, found that in 2015, among fatally injured drivers with a known test result, drugs were detected more frequently than alcohol.

The report was funded by the Foundation for Advancing Alcohol Responsibility, a nonprofit that advocates against drunk driving and underage drinking and that is funded by the distilled spirits industry.

If you only read the headlines about the report, you might conclude that drugs are now responsible for more traffic fatalities than alcohol. But the report doesn't say that. Its findings cannot show that drugs are responsible for more deaths on the roadways than alcohol, in part because it's difficult to apply the same standards developed for measuring alcohol impairment to other drugs.

The data used in the report comes from a U.S. government database called the Fatality Analysis Reporting System, which tracks fatal injuries caused by motor vehicle crashes. James Hedlund, an author of the report and an independent highway safety consultant, looked at drivers who died in motor vehicle crashes for whom there were test results for alcohol or other drugs.

But those tests were looking only for the presence of drugs or alcohol (which, of course, is a drug itself), not whether the driver was actually impaired by the substances or whether the substance caused the fatal crash.

He also says that the report's funder had no influence on his research.

For the purposes of Hedlund's analysis, a positive blood alcohol test means any detectable alcohol, including concentrations below the legal limit of 0.08 percent. A positive drug test means detectable amounts of at least one of the approximately 200 to 300 different drugs that are usually screened for in toxicology reports, says Hedlund.

While alcohol impairment standards are built on years of research, the science behind drug impairment standards is still iffy. For example, as Shots has reported, alcohol and pot behave very differently in the body. The concentration of alcohol in the body is pretty uniform; if it's 0.08% in your blood, it's similar in the brain. You're at your drunkest when your blood alcohol concentration, or BAC, is highest.

But pot's chief mind-altering component, THC, acts differently. A blood test could find THC in the brain but not in the blood, for example.

"We don't have a 0.08 BAC equivalent for marijuana," says J.T. Griffin, chief government affairs officer at the anti-drunk driving group MADD. States have tried to set limits. In Colorado, for example, the legal limit is five nanograms of THC per milliliter of blood. But the AAA Foundation for Traffic Safety says legal limits for marijuana and driving are "arbitrary and unsupported by science."

That makes it difficult to compare collision data. The National Highway Traffic Safety Administration found that 10,265 people were killed in alcohol-impaired driving crashes in 2015, an increase from 2014, accounting for about 29 percent of all motor vehicle fatalities that year. But without evidence-based national standards for pot impairment, there's no comparable data on road fatalities caused by marijuana.

And that's just pot. The drug tests in the FARS data also included other drugs tested for by individual states, and went beyond illicit substances to include prescription and over-the-counter drugs that can cause impairment, none of which come with evidence-based standards for measuring their effects on drivers.

In a statement on the organization's website on Monday, MADD says that the tests for signs of drugs and of alcohol in fatally injured drivers highlighted in the report "do not provide an apples to apples comparison."

Hedlund rejects that argument. "It's not a perfect comparison, but I think it's a reasonable one," he says, because the tests all measure traces of a substance, whether it's alcohol or another drug.

He says the takeaway should be that, over the last ten years, the proportion of positive tests for drugs other than alcohol has been rising, from about 28 percent in 2005 to 43 percent in 2015. The report notes that the FARS data should be interpreted with caution, but is the best we currently have.

MADD agrees that drug-impaired driving is a serious issue. "It's one that's growing. It's one we don't know a lot about," says Griffin. "We don't have good data in terms of how many people are being killed." But he says from the data that are available, other drugs have not overtaken alcohol in terms of traffic deaths. Charles Hurley, a former MADD CEO, says it would be a mistake to conclude from these data that we should devote less effort to combating drunk driving than to impairment related to other drugs.

Stephen Talpins, a former prosecutor who is on the board of the nonprofit Institute for Behavior and Health and was on an advisory panel that guided the report, thinks a debate over which substance is killing more people is misguided. "The problem isn't an alcohol impairment problem, and it's not a drug impairment problem. It's an impairment problem," he says.