Accessibility links
Companies Resist Laws Requiring Paid Sick Leave : Shots - Health News Dozens of states and cities require businesses to offer paid sick leave. But some employers are looking for ways to pre-empt those requirements, including at the federal level. 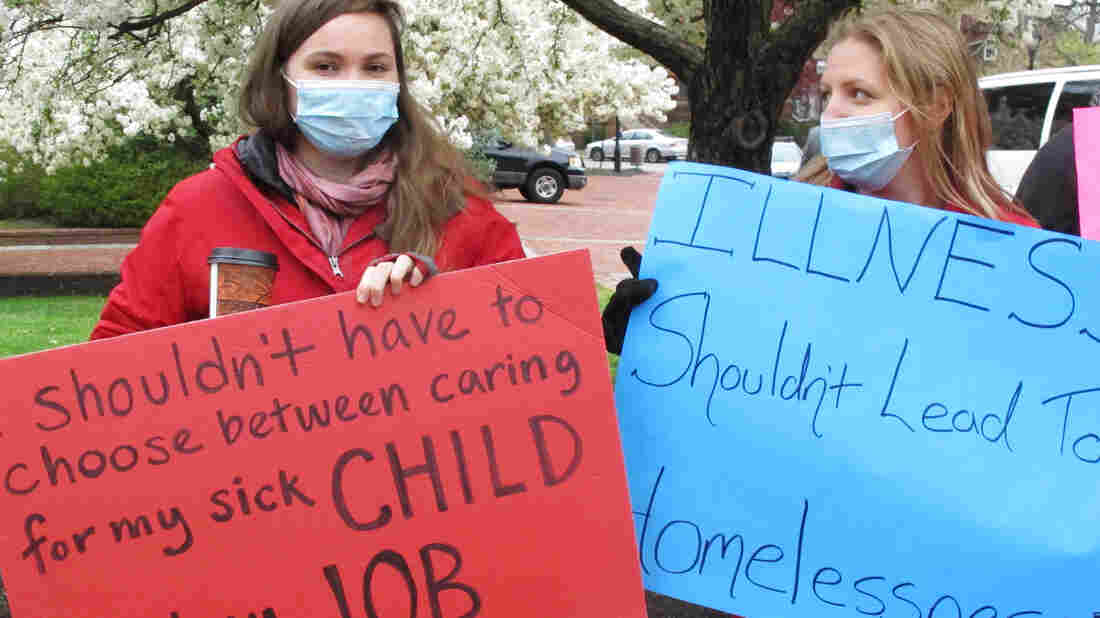 Sandy Robson (left) and Crystal Hall rally for legislation for paid sick leave on April 11, 2016, in Annapolis, Md. Under a bill recently sent to Gov. Larry Hogan, businesses with 15 or more full-time employees would be required to allow workers to earn at least five paid sick days a year. Brian Witte/AP hide caption 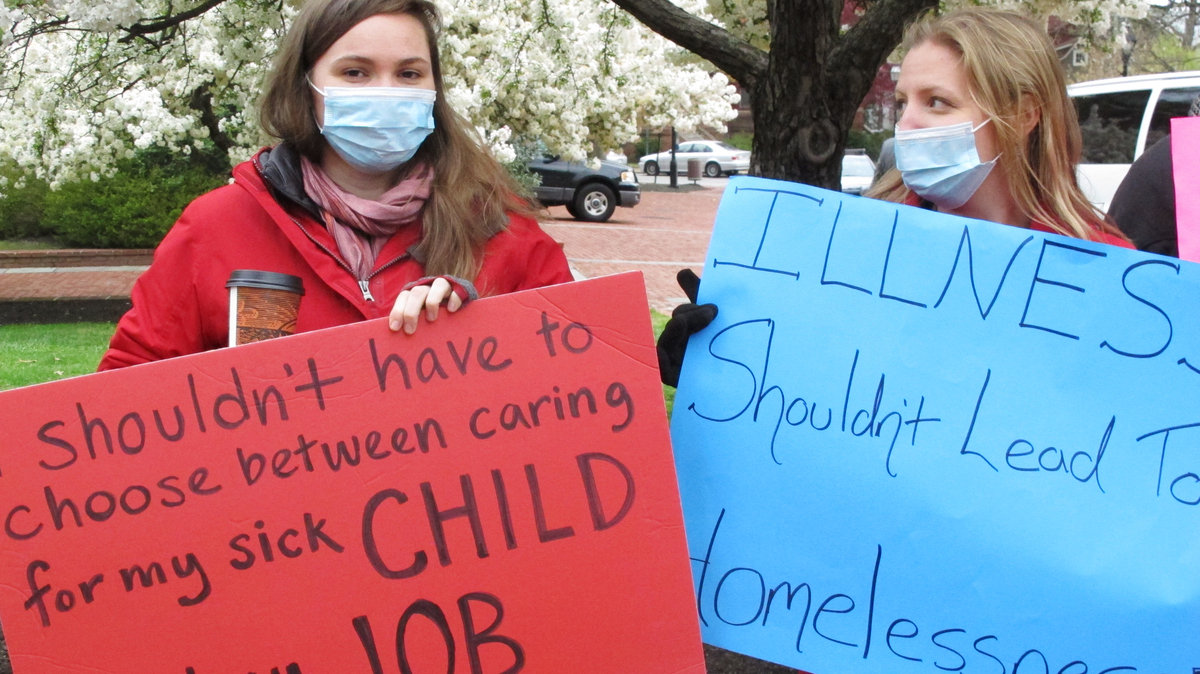 Sandy Robson (left) and Crystal Hall rally for legislation for paid sick leave on April 11, 2016, in Annapolis, Md. Under a bill recently sent to Gov. Larry Hogan, businesses with 15 or more full-time employees would be required to allow workers to earn at least five paid sick days a year.

Nearly three-quarters of private sector workers receive paid sick days from their employers, though there is no federal mandate requiring it. In recent years, dozens of states, cities and counties have passed their own ordinances, which typically require employers to provide between three and seven paid sick days a year.

The business community is fighting against the proliferation of these laws, saying that the landscape for paid-leave regulation is getting way too complex.

It's a large administrative headache, says Lisa Horn, director of congressional affairs for the Society for Human Resource Management.

"Mainly because of this hodgepodge, or patchwork, of a growing number of states and localities implementing ... paid-sick-leave mandates," she says.

So Horn says her group, along with other business groups, is helping draft a Republican proposal in the House of Representatives. The terms aren't finalized, but Horn says the basic idea would be to set a floor for the amount of paid sick leave employers could voluntarily offer. If that minimum threshold is met, she says, the employer would then be exempt from state or local regulations.

The concept is known as pre-emption; such laws are increasingly common, and not just for paid leave. Some states have laws that pre-empt city and county regulations governing minimum wage, anti-discrimination policies, or ride-sharing.

Proponents like Horn argue that federal and state pre-emption laws alleviate big administrative burdens for employers. But opponents argue such efforts undercut states' and cities' authority. Since many of the local measures were passed by ballot measures, their opponents say pre-emption nullifies the will of local voters who want more generous benefits for workers.

"We are concerned that we could start to see more super-pre-emptive measures where both the federal government as well as the state government is impinging on city rights," says Brooks Rainwater, a senior executive for the National League of Cities. He says statehouses tend to be more dominated by rural conservative interests, who see themselves opposed to some progressive policies backed by urban voters.

Paid leave — whether it's sick days or time off to care for a new child — is politically popular on both sides of the aisle.

Democratic proposals include the Family and Medical Insurance Leave Act, which would create a fund to provide up to 12 weeks of paid family and medical leave. Another, called the Healthy Families Act, would allow workers to earn up to seven days of annual paid sick leave.

She says support is nonpartisan. "That includes two-thirds of Republicans, three-quarters of independents and virtually all Democrats," she says.

That study underscores a recent poll from the Pew Research Center, showing support for paid leave ranging from 67 to 85 percent, depending on the specific policy. President Trump has endorsed parental leave and has not repealed his predecessor's executive order granting paid sick leave to federal contractors.

"Where we've seen progress has been in places regionally in the West, where Oregon and California have adopted paid-sick-days laws," she says.

Though the debate over paid sick leave is national, most analysts agree Congress is less likely to act on it and that the fight will remain mostly at the state and local levels.