Accessibility links
Lead Dust At Firearms Ranges Poses A Health Risk : Shots - Health News The Department of Defense has increased protections for military personnel from exposure to lead from firearms. It can be a health problem for people using recreational shooting ranges, too.

Lead Dust From Firearms Can Pose A Silent Health Risk

Lead Dust From Firearms Can Pose A Silent Health Risk 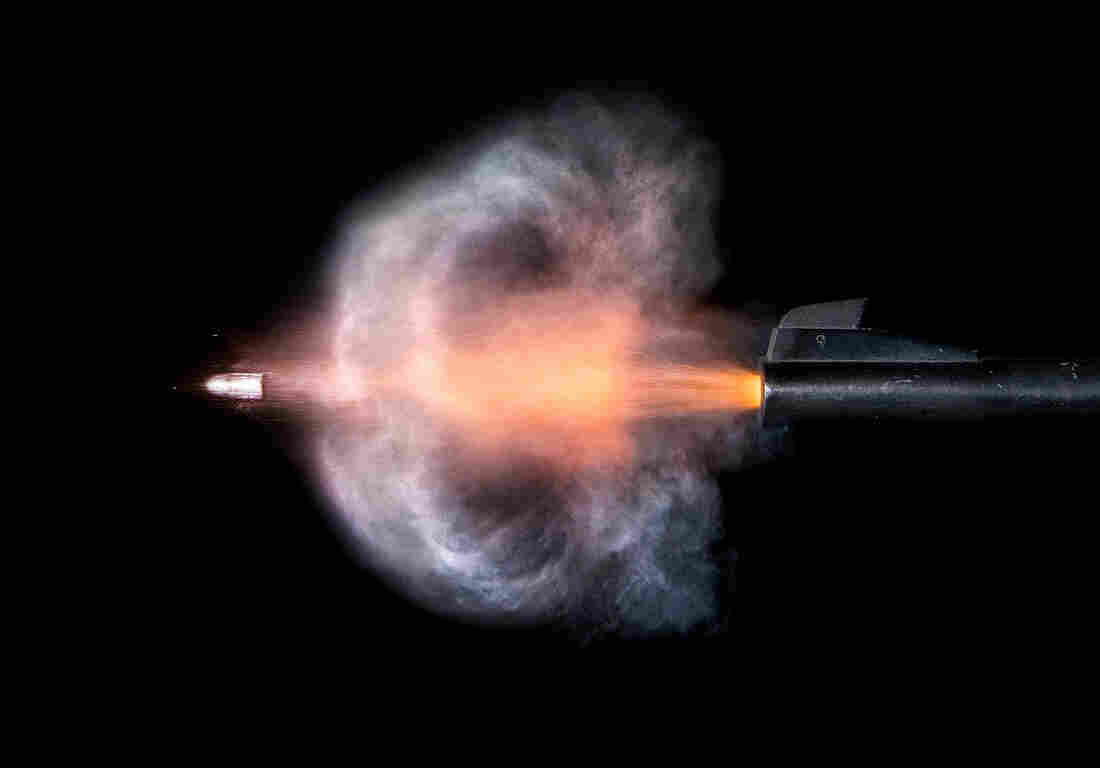 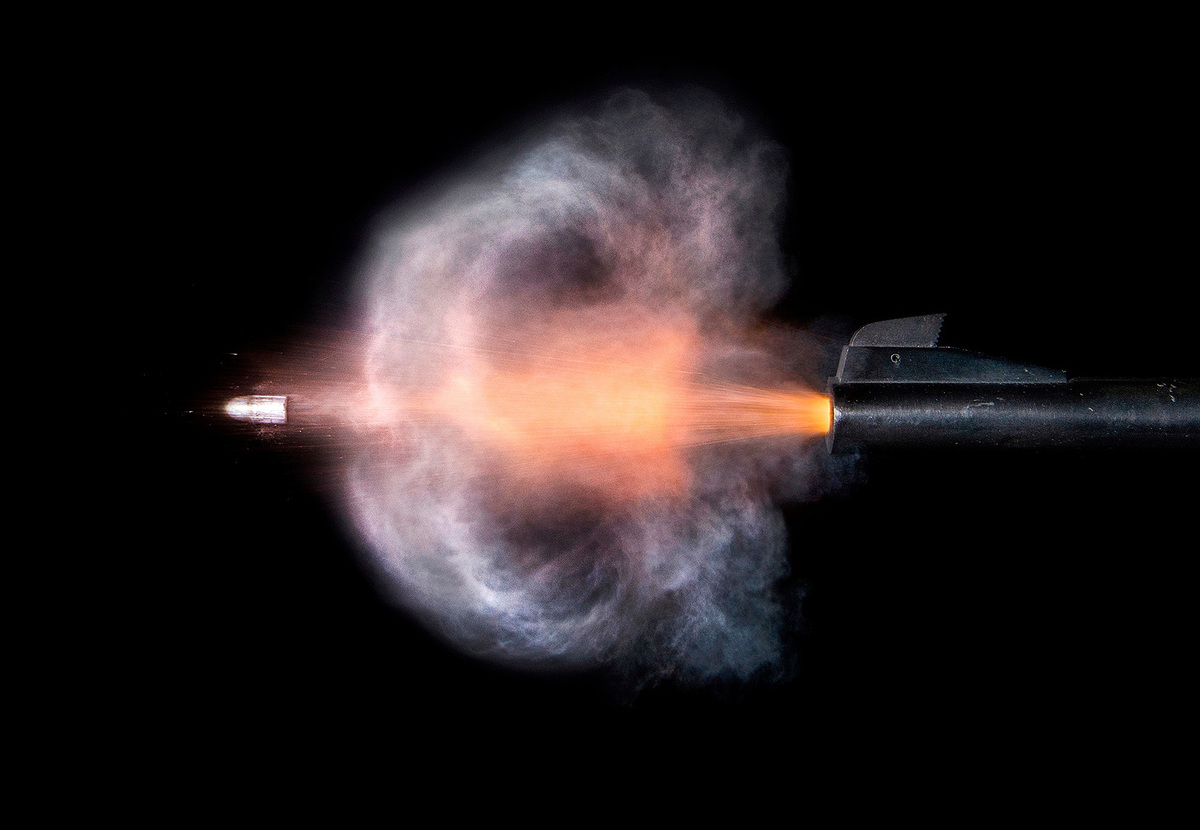 Firearms using lead ammunition spray lead dust out of the muzzle and ejection port when fired.

Firearms safety is key for people who use weapons at work or for recreational shooting. But one risk has been little acknowledged: Lead dust exposure.

In a standard bullet, a solid lead core wrapped in a copper jacket sits atop a stack of gunpowder and lead primer. When the gun fires, the primer ignites, the gunpowder lights, and some of the lead on the bullet boils. When the casing snaps out of the ejection port, lead particles trail behind it. As the bullet hurtles down the barrel of the gun, a shower of lead particles follows.

If a gun range isn't ventilated well, lead dust collects on shooters' clothing and hands and lingers in the air, where it can be inhaled. The more people shoot, the greater the risk of being exposed to dangerous amounts of lead. It becomes an occupational hazard for weapons instructors, police and defense personnel.

It can also put family members at risk. A 1-year-old boy in Connecticut was found to have high blood lead levels at a routine doctor's visit. There were no lead paint or pipes in the child's home. The exposure was traced to his father's job as a maintenance worker at an indoor shooting range; the father cared for his son after work in lead-contaminated clothing, according to a 2015 report from the state public health department.

In order to reduce risk, the Department of Defense has lowered its blood lead standard to 20 micrograms of lead per deciliter of blood, three times more restrictive than its previous standard, which relied on Occupational Safety and Health Administration guidelines. These OSHA guidelines apply to workers inside the United States, including employees of private firing ranges, but not to customers of those ranges.

The OSHA standards for blood lead and exposure to lead have long been criticized as inadequate and dangerously outdated. "The current [Occupational Safety and Health Administration] standard hasn't been updated since the 1970s," says Dr. Elena Page, an occupational and environmental hazards physician at the National Institute for Occupational Safety and Health. "It's widely acknowledged that the OSHA standard is not protective. They're clearly aware of that, and there's been a lot of pressure to change it." OSHA did not provide comments or interviews requested for this story.

About 1 million law enforcement officers train on indoor ranges, according to the CDC, and there are 16,000 to 18,000 private indoor ranges in the U.S.

Currently, the OSHA standards for lead exposure decree that employees must stop working if they have a blood lead level of 60 micrograms of lead per deciliter of blood, and workers can return to the job if their blood lead level drops below 40 for two consecutive tests. But adverse effects on cardiovascular health, brain function and kidney function have been connected to blood lead levels as low as 5. "There's no amount of lead in your blood that's safe," Page says.

The issue of lead exposure and firearms is divisive, even the question of whether higher lead levels are unsafe. "Well, that's their opinion," says Larry Keane, the vice president and general counsel for the National Shooting Sports Foundation. "We believe there are efforts by others that want to diminish people's participation in shooting sports or exercise their second amendment rights. They put out or advocate positions that are unsupported by the evidence."

The need for a stricter lead standard is obvious, says Adam Finkel, a law professor at the University of Pennsylvania and a former OSHA official. "OSHA is really letting people down," he says. "We're learning more about the neurologic effects of lead, and for whatever reason this substance has the capability of causing a whole spectrum of health effects at the OSHA standard that people don't appreciate."

Many effects from lead can be subtle or nonspecific, says Mark Laidlaw, an environmental health scientist at RMIT University in Australia. "Memory and concentration problems, headache, abdominal pain, mood disorders – they can be attributed to a number of things unrelated to lead," he says. "You can have one of these health effects, but the shooters might not realize these are associated with their shooting. They just don't know they're being lead poisoned."

At levels slightly higher than 5 micrograms of lead per deciliter of blood, people may begin suffering spontaneous abortions or kidney dysfunction, according to the CDC. As the volume of lead in the body increases, the effects become more severe.

"At levels of 10 or less, there's definitely evidence of increased incidence of tremor. Some are more cognitive effects," says Catherine Beaucham, an industrial hygienist at NIOSH and author of a 2014 report that found that most people with elevated blood levels were exposed from working at recreational firing ranges. "With acute lead poisoning, you can get wrist drop, nerve problems, abdominal pain. If it gets high enough, you can get a coma and death."

Firing ranges can be particularly hazardous environments. Defense department ranges, private recreational firing ranges and law enforcement facilities have been found to be contaminated with high levels of lead, according to investigations by The Oregonian and Seattle Times in 2016 and 2014. Often, neglected or failing ventilation equipment was to blame.

And when OSHA has inspected firing ranges in the last few decades, the agency has commonly found lead contamination violations. "It's about 30 years of sampling. They haven't done very many, but just a quick look shows about 350 air samples," Finkel says.

About half of samples exceed the 50 microgram per cubic meter air level standard for workplaces, Finkel says, and some gun ranges had contamination levels]up to 24,100 micrograms per cubic meter of air. "So, it's terribly, terribly common, and [OSHA] finds overexposures even to their 40-year-old inadequate standard."

The defense department's new blood lead limit of 20 does not go far enough, Laidlaw says. He thinks a better standard would be a maximum of 10 micrograms of lead per deciliter of blood. "It is a step in the right direction, however the best way to deal with the problem is to eliminate lead from bullets and primers," he says. "I worry about the health of the young men and women in the military who are exposed to lead regularly while using firearms."

The Defense department has a long-term goal of reducing employees' blood lead levels to below 10, Brindle says. "The DoD policy requires mandatory removal of the worker from workplace exposures when their blood lead level exceeds 20, and effectively will achieve the long-term average blood lead level to stay below 10," he writes to NPR in an email.

But some within the industry say it's not necessary to abandon lead ammunition. "[Lead] is only a problem if [gun ranges] are not designed maintained properly," says Bill Provencher, the co-founder of Carey's Small Arms Range Ventilation in Tinley Park, Ill. "Even if OSHA standards are somewhat risky, a properly ventilated range has hardly detectible lead levels at 0.6 [micrograms per cubic meter of air.]"

The most important thing aside from range ventilation, Provencher says, is to make sure that people are using safe practices like carefully washing their hands and clothes after shooting. "I would say [awareness] is going from not very good to good," he says. "The people I've met with really high lead levels, most of them did seriously silly things like working in the environment while drinking coffee. Ranges can be an unsafe place, but they can be perfectly safe places. There are people out there who are just hard headed and do silly things."

An earlier version of this story misspelled Catherine Beaucham's last name as Beauchum.