Accessibility links
Skip The Arthroscopic Knee Surgery For Arthritis Pain : Shots - Health News This is the latest study to find that arthroscopic surgery doesn't reduce pain for people with knee arthritis, and can cause other problems. The procedure remains popular in the U.S. 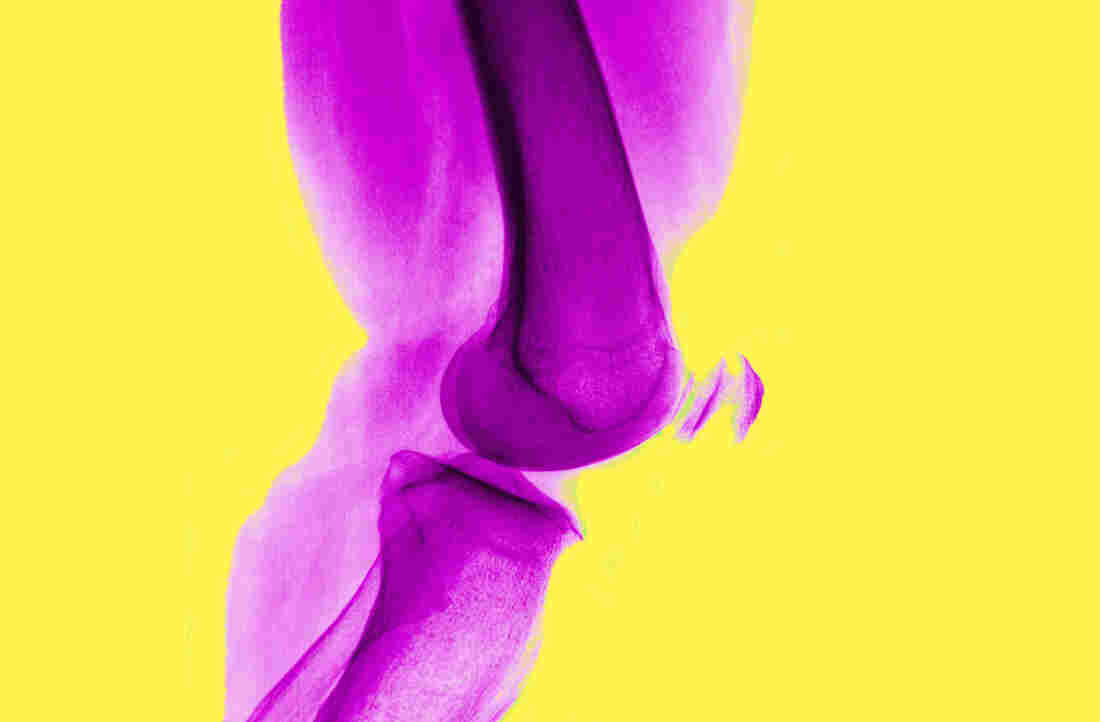 Arthritis of the knee is very common, and isn't helped by arthroscopic surgery, a study finds. BSIP/UIG via Getty Images hide caption

An international panel of surgeons and patients has challenged the effectiveness of one of the most common orthopedic procedures and recommended strongly against the use of arthroscopic surgery for patients with degenerative knee problems.

The guidelines, published Wednesday in the journal BMJ, reviewed 13 studies involving nearly 1,700 patients and found the surgery did not provide lasting pain relief or improve function for most of them. Those studies compared the surgery with a variety of options, including physical therapy, exercise and even placebo surgery.

Fewer than 15 percent of patients felt an improvement in pain and function three months after the procedure, and that those effects disappeared after one year, the review found. In addition, the surgery exposed patients to "rare but important harms," such as infection.

Casey Quinlan, 64, who had the surgery in 2003 and was on the panel issuing the guidelines, said her orthopedist told her the procedure would not only help restore mobility in her knee after a nasty ski accident but also improve her arthritis.

Quinlan, of Richmond, Va., said the procedure did not deliver, since her arthritis remained unchanged. "It was not what I was told to expect," she says.

In an arthroscopic knee surgery, physicians make several small incisions around the joint and insert a tiny camera that allows them to see inside the knee as well as insert small instruments to correct problems they identify. Often the surgery is performed to remove part of a damaged meniscus, a disc of cartilage that helps cushion the knee.

The panel said meniscal tears "are common, usually incidental findings, and unlikely to be the cause of knee pain, aching or stiffness."

The panel said the surgery is performed more than 2 million times a year across the globe, and in the United States alone costs more than $3 billion annually.

The panel's recommendations are counter to guidelines from a number of medical groups. Most of those organizations have recommendations against arthroscopy for patients solely with arthritis that can be seen through an X-ray. But many still promote the procedure for people with ailments such as meniscal tears, which are frequently present in arthritic patients.

The American Academy of Orthopaedic Surgeons does not recommend the treatment for patients with arthritis, said David Jevsevar, chairman of orthopedics at the Dartmouth Geisel School of Medicine and chair of the AAOS Council on Research and Quality. He said the BMJ assessment is in line with current evidence, but he also cautioned that generalizing a variety of randomized trials does not necessarily take into account the circumstances of individual patients.

"Guidelines don't apply to every patient," Jevsevar says. "There's always going to be an exception."

Reed Siemieniuk, a physician in Ontario, Canada, and the lead author of the panel's statement, said he understands the frustration some people may have about the guideline — especially those who have seen an improvement with surgery.

The strongest evidence of a procedure's benefit is a randomized controlled trial, Siemieniuk notes, "Despite those personal experiences that say it might be doing good, the evidence suggests that it might not be doing any good."

Siemieniuk said that the panel's reading of the studies suggests that "on average, the pain relief that you're getting is not going to be important to you at all."

The BMJ assessment is the latest in a string of studies that have raised concerns about the surgery. The journal also published a study in 2015 by researchers in Denmark showing that arthroscopic repair of the meniscus for middle-aged people was not much better than exercise in relieving pain and carried a risk of rare but debilitating side effects.

The surgery was questioned in 2002 after researchers reported in The New England Journal of Medicine that in a randomized trial of older veterans with osteoarthritis in their knees, arthroscopic surgery was no more effective in treating pain than a placebo surgery in which patients had incisions made but no instruments were inserted into the knee. At least three other studies in that journal since then have also found arthroscopy is not better than sham surgery or physical therapy in relieving arthritis pain in the knees of older adults.