Accessibility links
As Air Mattresses Get More Cheaper, A Reminder They Are Not Safe For Infants : Shots - Health News Inflatable beds are increasingly popular, and their soft, impermeable surfaces, increase risk of sudden infant death. But they are often the only bed that a family can afford. 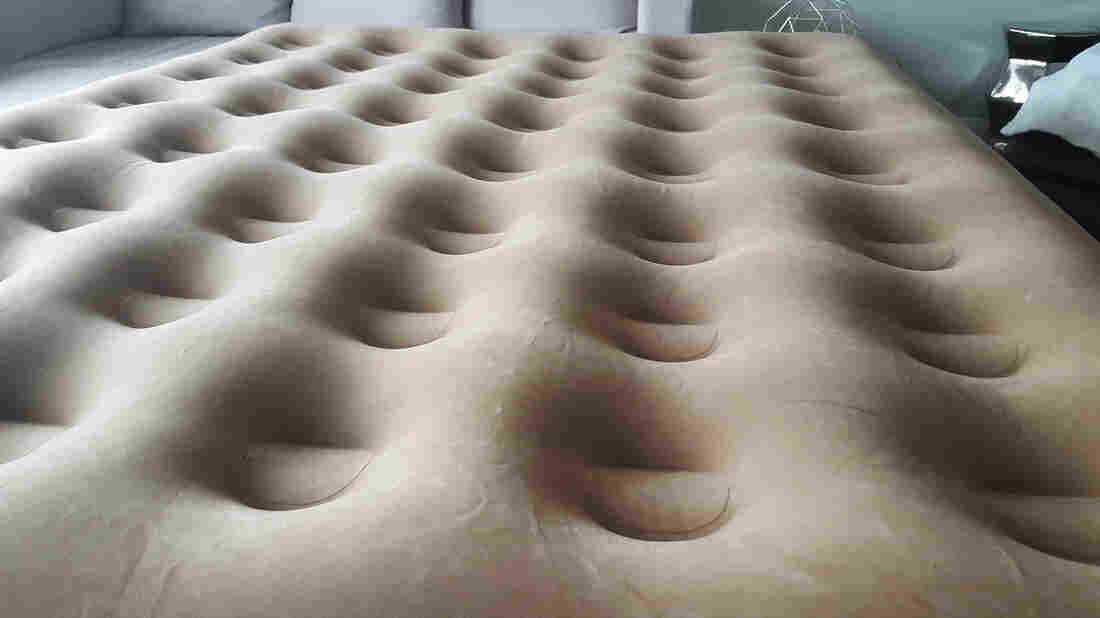 The soft, impermeable and uneven sleep surface of an air mattress can pose a danger to infants. Courtesy of The Sleep Judge hide caption 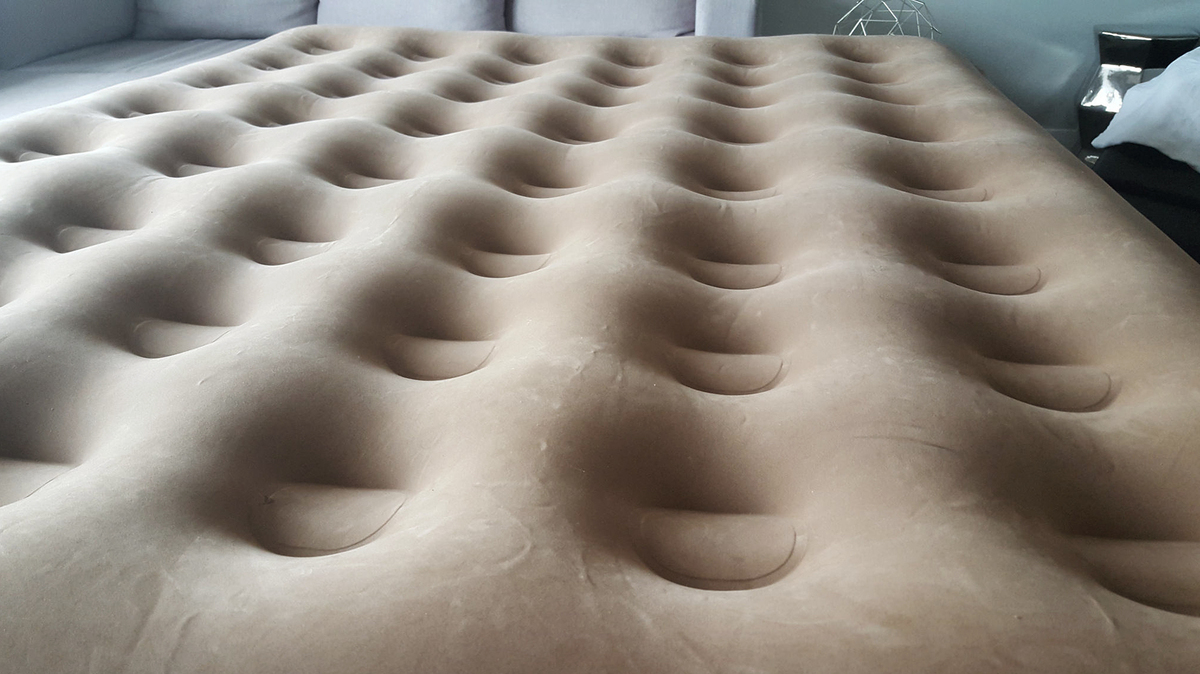 The soft, impermeable and uneven sleep surface of an air mattress can pose a danger to infants.

Courtesy of The Sleep Judge

Inflatable beds can be cheap, which is good news for consumers who want an alternative to pricey traditional mattresses. But their uneven, soft, impermeable surfaces are dangerous for babies, and can increase the risk of sudden infant death.

The dangers may be particularly acute for low-income families, a recent essay in the American Journal of Public Health argues.

Without knowing the dangers of putting babies to sleep on an inflatable surface, "people without a lot of disposable income may seek out an air mattress as a permanent alternative," says Jennifer Doering, a public health researcher and nurse at the College of Nursing at the University of Wisconsin, Milwaukee and one of the authors of the paper. And, she notes, "infant death tends to affect racial and ethnic minorities more often than Caucasian populations."

Doering specializes in research about product safety and infant sleep environments, and says she sees a multiple troubling trends around infants and air beds. Bedbug infestations in American cities have required people to dispose of traditional mattresses, and decreased the willingness of some charitable organizations to accept mattress donations, she writes.

"We're starting to see people using them more full time as a sleep solution, rather than the mother-in-law just comes over," says Matthew Whalen, the director of risk management for the company Intex, which he describes as the largest distributor of air mattresses in the world. In an Amazon.com search, eight of the top 10 results for "air mattress" were manufactured by Intex. 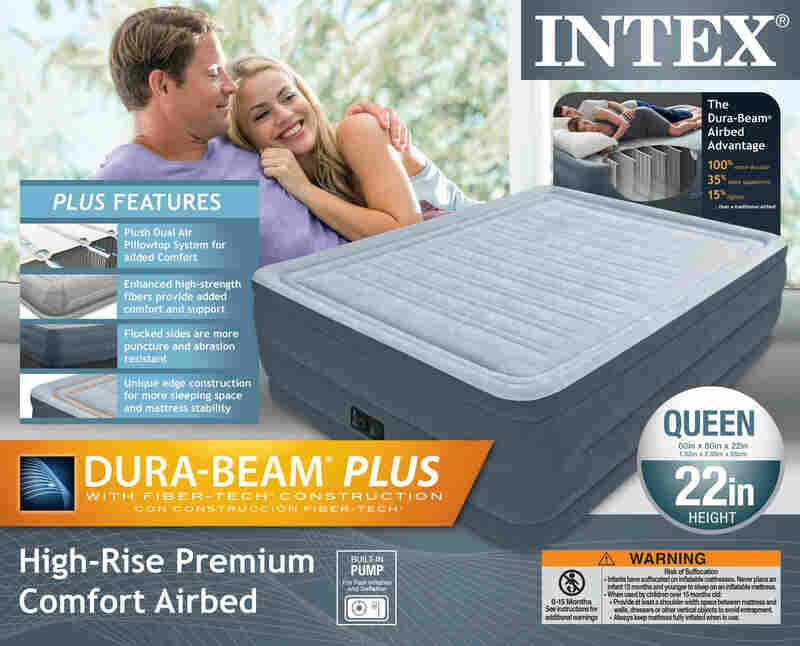 The infant warning is in the lower right-hand side of the packaging. Intex hide caption 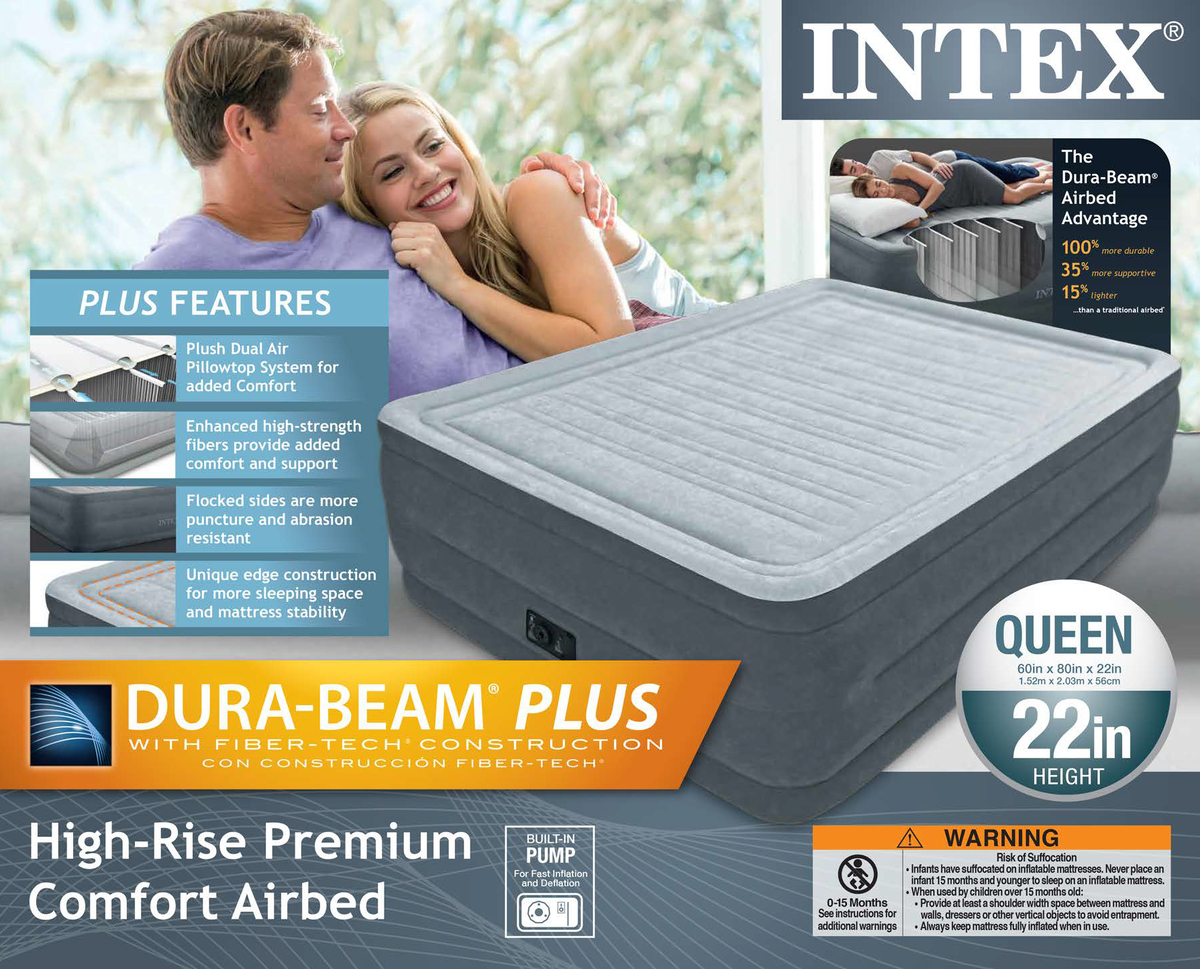 The infant warning is in the lower right-hand side of the packaging.

And, Whalen says, there is anecdotal evidence that suggests people with less income may be turning to inflatable beds more. "Air mattresses have gotten less expensive," he explains. The cheapest inflatable mattresses on Amazon are around $20.

It all adds up, Doering says, to a potentially risky situation for young children.

Doering and a co-author report that 108 infants died in connection with sleeping on an air mattress between 2004 and 2015, according to data from 24 states, collected in the National Child Death Review Case Reporting System.

That number is relatively small compared to the total number of infants who die of accidental suffocation or strangulation in bed. In 2015, that number was about 900, according to the Centers for Disease Control and Prevention.

But the issue of air mattress-related infant death is enough of a concern that regulators looked into it. In 2014, the Consumer Product Safety Commission announced it had worked with the industry and child safety advocates on new safety labeling.

"We recommend that infants under the age of 15 months should not be put to sleep on an inflatable air mattress," says CPSC Acting Chairman Ann Marie Buerkle.

Whalen and a colleague at Intex helped develop the safety labels, which are printed on the package and on the side of the air mattress.

Doering says the labels are a good start, but that protecting infants from inflatable beds requires more than safety labels. "You know, you buy it, you might look at it once, but are the rest of your family members going to look at it every time you blow it up? No, not necessarily," she says.

Similarly, there appears to be no prominent mention of inflatable mattresses in the website for the National Institute of Child Health and Human Development's federal "Safe To Sleep" public education campaign, although the CPSC's landing page for the campaign does include a link to a warning poster.

"It has to be multiple strategies," says Doering. That includes health care professionals, position statements from organizations and sleep education brochures, she says, to get the message out in multiple ways.

A previous version of this story said the CPSC announced new safety labeling in 2014. Those labels were developed by the independent standards organization ASTM International, in collaboration with CPSC and other groups.