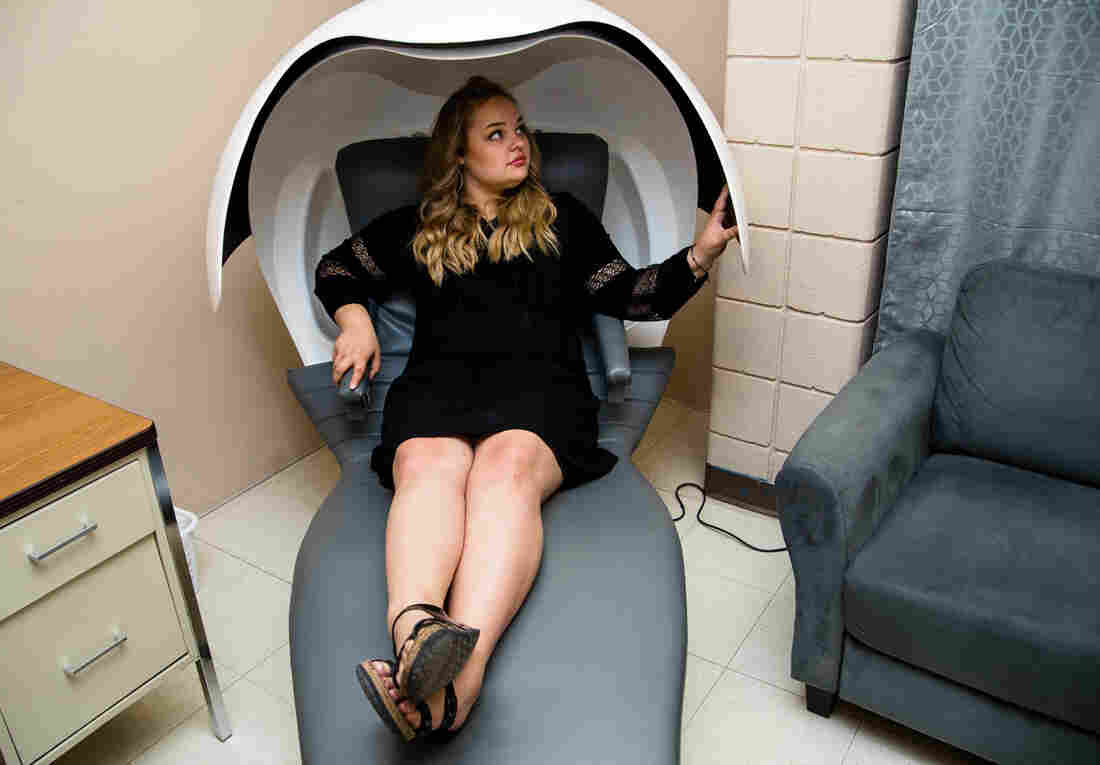 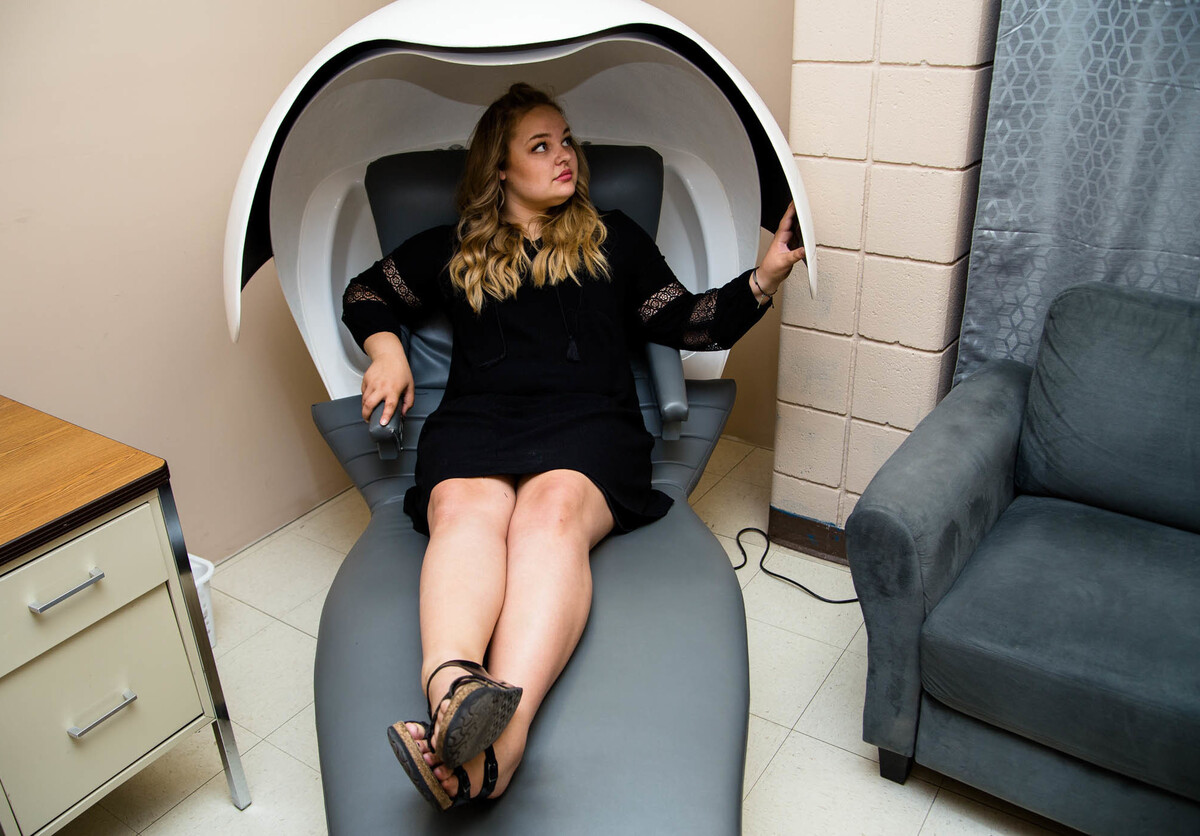 When 18-year-old Hannah Vanderkooy feels extremely tired or anxious, she heads to a spacelike capsule for a nap — during school. Like many teens struggling to get good grades and maybe even a college scholarship, Vanderkooy doesn't get enough sleep.

And she's not alone. Various studies indicate that chronically sleepy and stressed-out teenagers might be the new normal among U.S. adolescents who are competing for grades, colleges and, eventually, jobs.

Studies have shown teenagers actually need between nine and 10 hours of sleep a night. But the vast majority (69 percent) aren't getting it.

Enter "napping pods." They're essentially egg-shaped lounge chairs that recline, with a circular lid that can be pulled over the chest to shield against light.

"It just sort of envelops you in a really nice darkness, with soft lighting behind you," says Vanderkooy, a frequent user of the pods. She says she typically gets only four to five hours of sleep a night.

There's soft music playing in the pod and "you just feel extremely relaxed," she says. The 20-minute experience is a wonderful "oasis" amid all the worry and stress of school, she says. 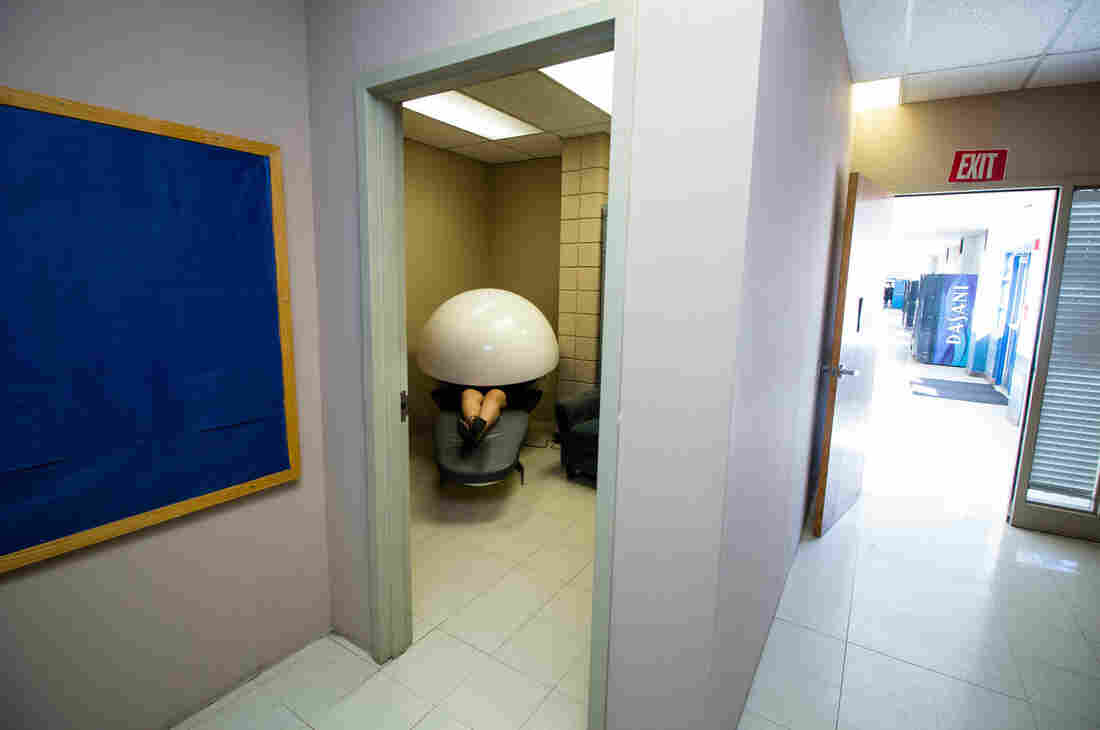 Las Cruces High School has one napping pod, which students use for 20 minutes when they are tired, stressed or angry. Joe Suarez for NPR hide caption 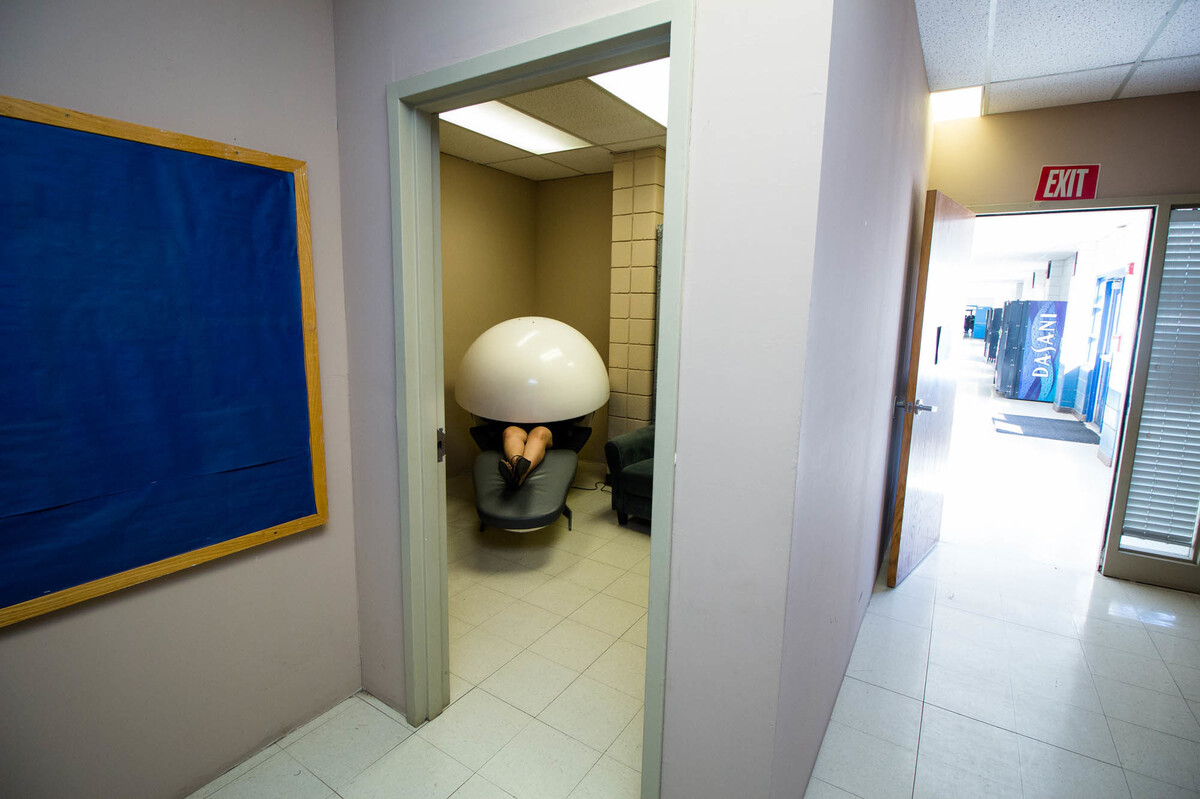 Las Cruces High School has one napping pod, which students use for 20 minutes when they are tired, stressed or angry.

"Being a senior, I have to apply for scholarships, do all my homework," she says — noting that she's taking three advanced placement courses. "So my sleep cycle has just sort of become this night-owl life, and it's just kind of the new normal."

A nap can't substitute for a good night's sleep, but it certainly can help, says Dr. Nitun Verma, a sleep specialist and spokesperson for the American Academy of Sleep Medicine.

A short nap for a teenager "can give a boost to memory and attention during the day, and it can increase school performance," he says, adding that in a perfect world, schools would roll back their start times.

As it is now, the average school starts at 7:30 in the morning while the start time recommended by researchers at the Centers for Disease Control and Prevention is 8:30 a.m. or later. On top of that, teens' circadian rhythms work against them — coaxing them to stay up late and then sleep late. So they are already sleep-deprived and "waking up much earlier than normal," Verma says.

Several public schools in New Mexico are trying to tackle the problem by providing napping pods for their students.

Summers also works with the nearby Las Cruces High School health center, and has seen firsthand the effects of sleep deprivation on students there. So she decided to apply for a federal health grant to buy the pods, which, at the time, cost $14,000 each. They were installed in four high schools. 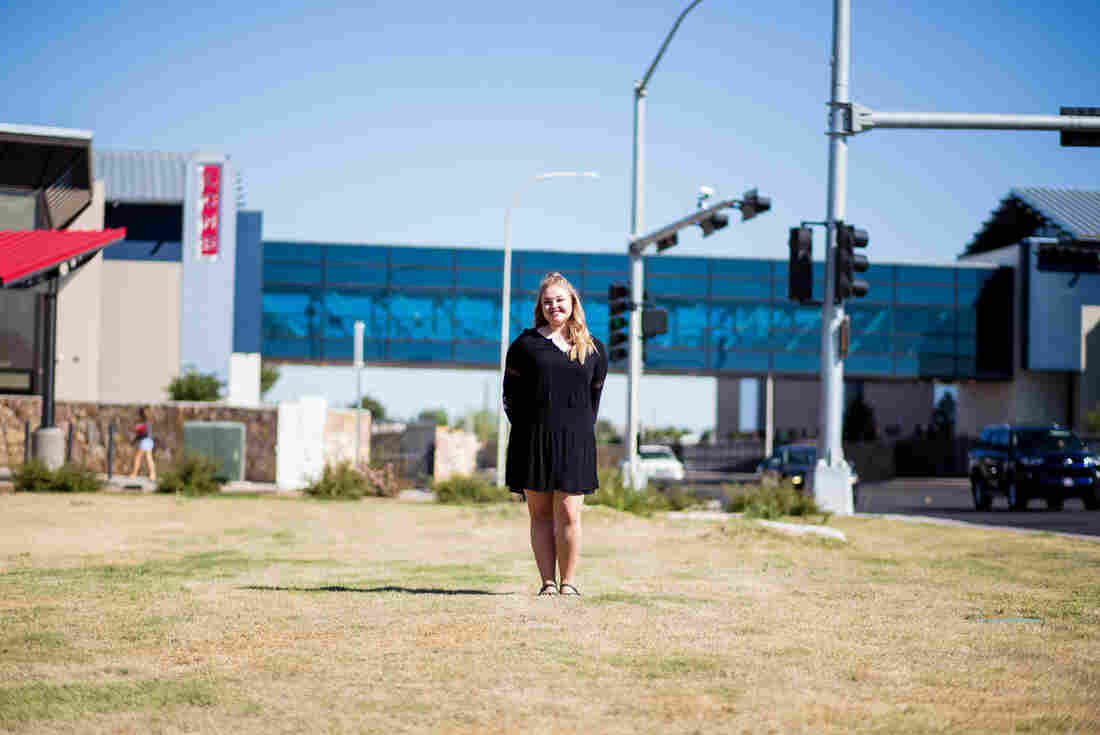 Vanderkooy is a senior at Las Cruces High School. She says she typically gets only four to five hours of sleep a night. Joe Suarez for NPR hide caption 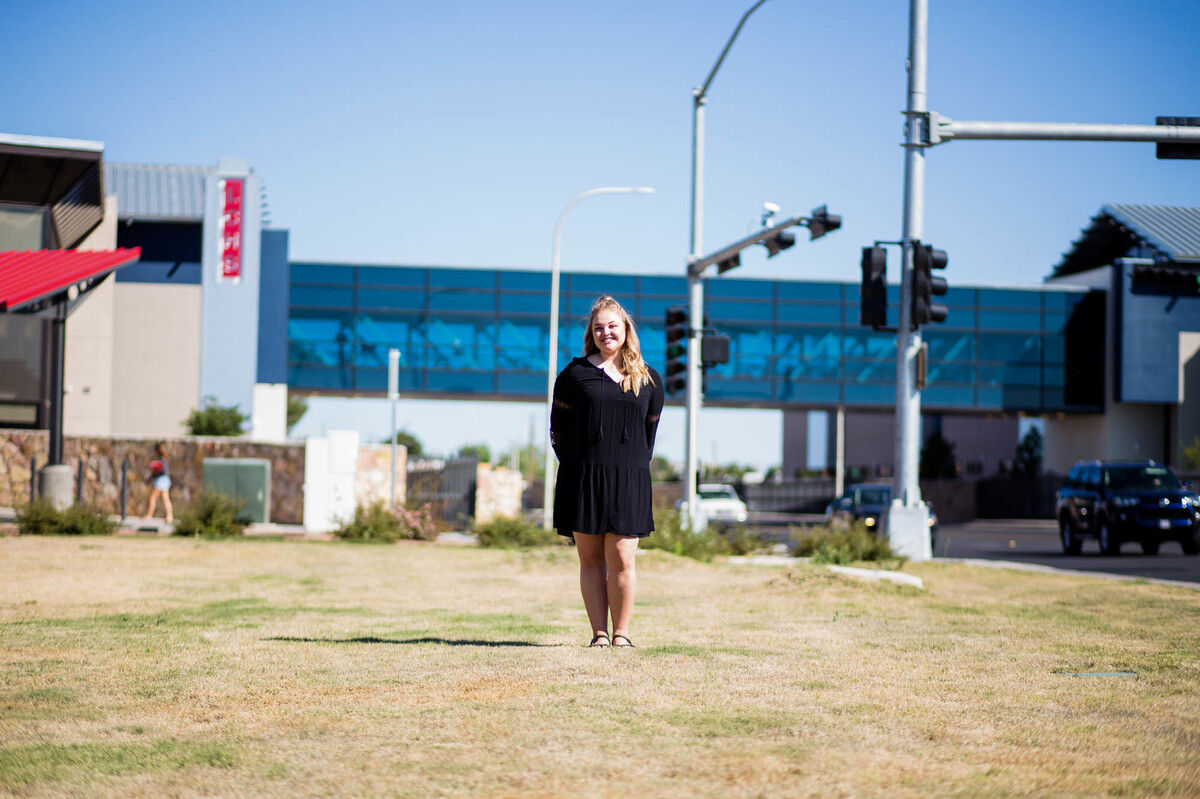 Vanderkooy is a senior at Las Cruces High School. She says she typically gets only four to five hours of sleep a night.

And while the Las Cruces school napping pods were bought to remedy sleep deprivation, Summers says, "it also turns out to be good for anger and stress."

Even if kids don't fall asleep, but simply "zone out," she says, they emerge saying they feel "refreshed and calm." This led Summers to embark on a study looking at the emotional impact of pods.

She recruited students who reported feeling "agitated or upset about something," and had them describe their feelings before and after spending 20 minutes in the pod.

"They all felt more rested, happier and more in control of their emotions," she says, "after just 20 minutes." Summers now writes prescriptions for the nap pod for students who are anxious, angry or just plain sleepy.

The findings haven't been published yet, but they have been accepted for publication by a peer-reviewed journal. Summers says the teachers and school nurses she works with already see the pods as a big success. Each capsule is sort of a "therapeutic study hall," she says, that helps students focus better when they're in the classroom.

Vanderkooy recalls falling asleep in one of her classes and being told by her teacher that she "really, really" needed to go take a nap.

"I came back and I was awake and attentive," she says, able to take out her notes and proceed — "just like a normal class."