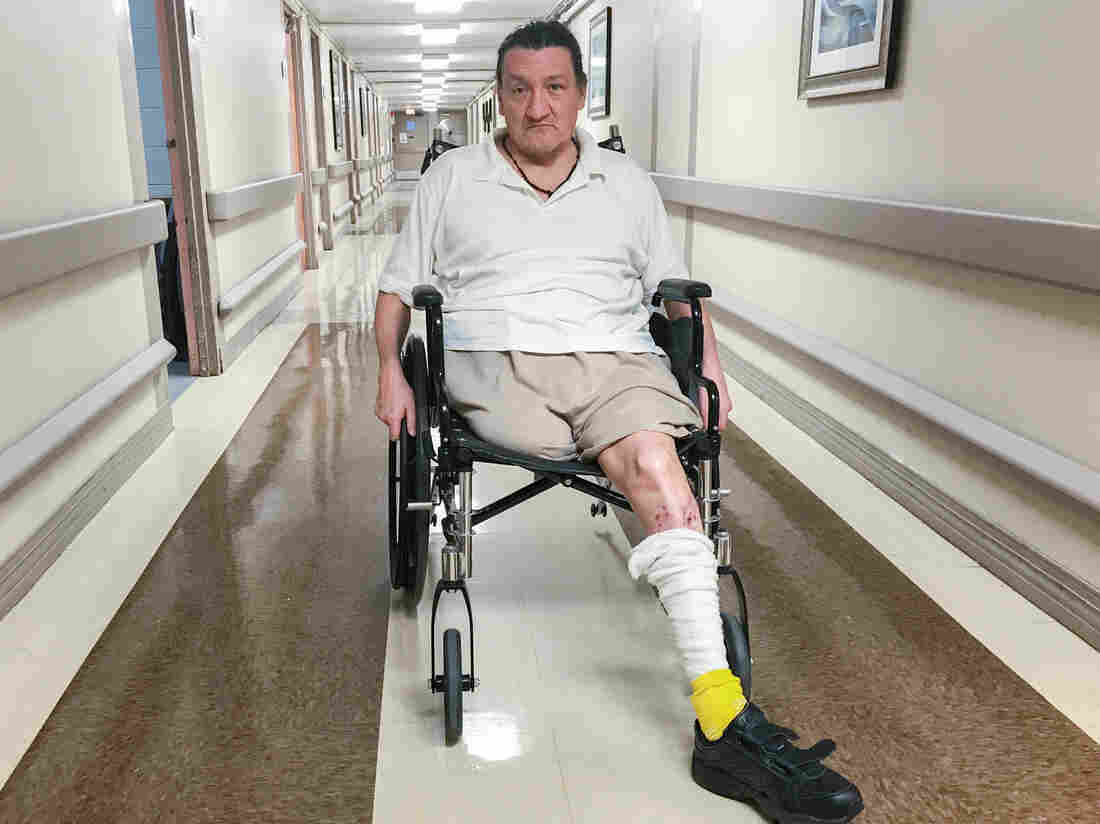 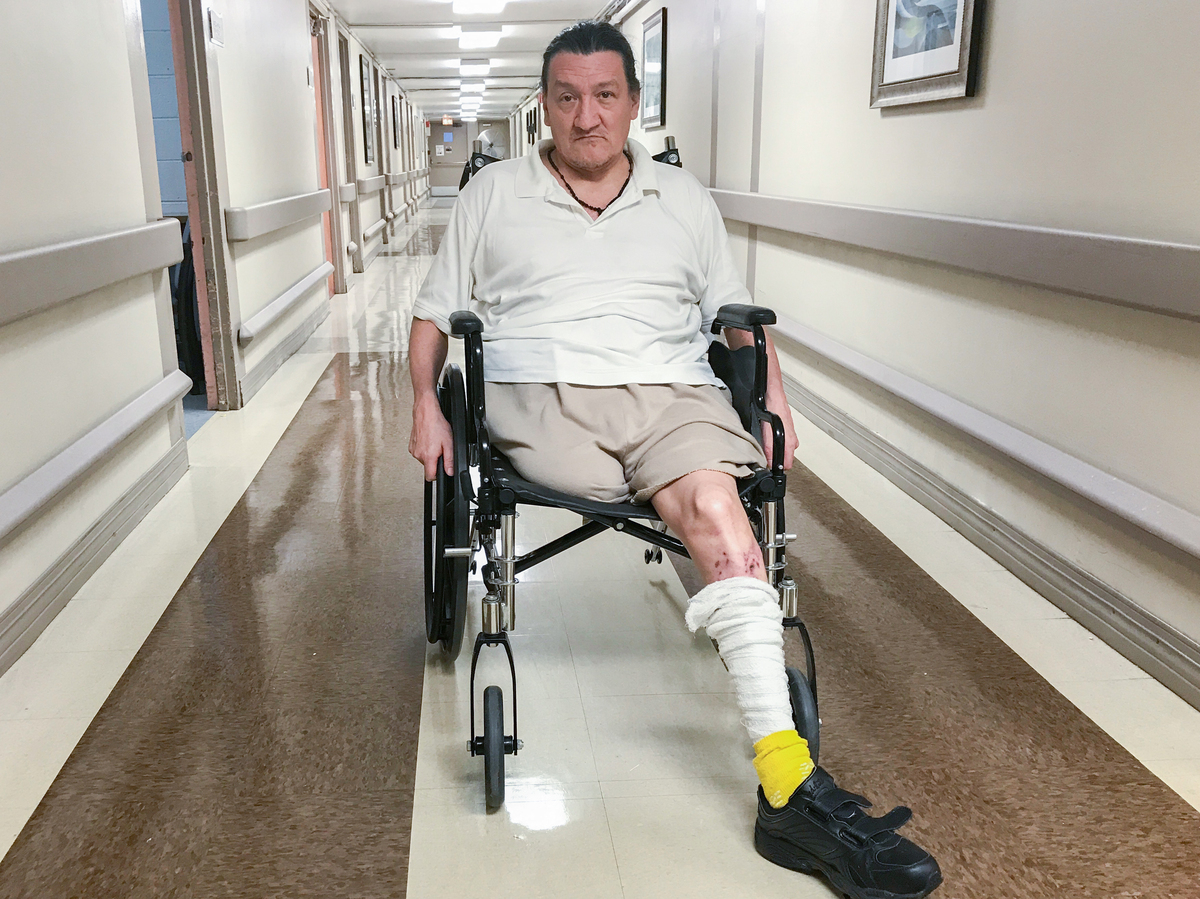 Vincent Galvan first went to a nursing home in 2012 after his right leg was amputated. He was evicted after complaining about his care.

People complain about nursing homes a lot: the food's no good or there's not enough staff, and so on. It's a long list. But the top complaint, according to the federal government, is eviction from a nursing home.

Technically, it's known as involuntary discharge, and in 2015 it brought in more than 9,000 complaints. Now, a couple of states are looking for ways to hold nursing homes accountable for unnecessary evictions.

One of those states is Maryland. Brian Frosh, the state's attorney general, says that, in Maryland, more than half of all involuntary discharges have come from just one small chain of nursing homes run by Neiswanger Management Services, or NMS Healthcare.

"Your odds of getting evicted from an NMS nursing home are about a hundred times what they are of any other nursing home in the state," says Frosh.

Maryland is now suing NMS for Medicaid fraud. The suit alleges that the company charged the state for services it didn't deliver, specifically for discharge planning. Nursing homes are supposed to make sure a resident has a safe place to go. But Frosh says that NMS sent residents with complex medical needs to homeless shelters or to unlicensed board-and-care facilities.

For example, according to the complaint, a woman with severe dementia was dropped off in front her son's home. Someone from NMS "just opened the car door and let her out and drove away," says Frosh. "Her son found her wandering around several hours later when he came home from work."

The company's motivation was purely financial, says Frosh. To understand his argument you need to know two things. First, Medicare pays nursing homes a lot more than Medicaid does. And, second, Medicare payments for long-term care only last for 100 days, and can only be used for skilled nursing care. Frosh says that NMS evicted hundreds of residents just as they were transitioning from Medicare to the lower-paying Medicaid.

"We cite emails in the complaint that offer a bounty for getting patients out quickly," says Frosh. "A hundred bucks is offered for somebody who can make a bed vacant within two hours." That made more room for new patients who were on Medicare.

Attorneys for NMS did not make anyone available to NPR for comment. But, in court documents, the company calls the state's charges false, reckless and inflammatory.

"We're seeing nursing homes that have made a financial decision that they would like a certain type of resident," says Biss.

He means residents who are compliant and don't require too much staff time, and when a nursing home has a resident who doesn't fit the mold "they're able to essentially drop them at the hospital and walk away," Biss says.

That's what happened to a 57-year-old Chicago man named Vincent Galvan, who first went to a nursing home in 2012 after his right leg was amputated. His left side was already damaged from an earlier accident. He thinks he was evicted because he complained too much, especially about staffing levels and about not getting the physical therapy he needed to use a new prosthetic leg.

First, he complained to the staff at the nursing home, "but they didn't pay no attention," says Galvan. "So, I heard they had a hotline for the corporation they belong to. I called them also. And nothing really happens." He also called the Illinois Department of Public Health. As he tells it, one day without warning, the paramedics showed up and took him to a hospital psychiatric unit.

"They were actually accusing me of being aggressive and that I was a schizophrenic, that I have manic depression. And none of that was true," he says.

Galvan's hospital progress notes confirm that he did not have a serious mental illness. But the nursing home still wouldn't take him back. It took the hospital 102 days to find another nursing home for Galvan. All that time he remained in the psychiatric ward.

"It was crazy," he says. "It was really crazy. It was one of the worst experiences of my life."

There are perfectly legal reasons to evict someone from a nursing home. For example, a resident might improve and no longer need nursing care. Residents can also be evicted if they are a danger to other people. And residents have a right to protest if they think that the law wasn't followed, but, in Illinois, even if the nursing home is found to be in the wrong, the Department of Public Health can't force the nursing home to take the resident back.

That's what Biss's legislation would change.

"It gives the department the power to order a resident readmitted," he explains, and failure to do that would result in a fine of $250 per day, which could add up quickly.

"This bill ... goes above and beyond what should happen," says Matt Hartman, Vice President for Public Policy at the Illinois Health Care Association which represents nursing homes. He disagrees about the magnitude of the evictions problem. Anyone can complain, he says. That's not the same thing as verified wrong-doing, and he says that raising fines on nursing homes won't help residents.

"Anything that takes that much money away from resident care and away from staffing and medical equipment is just not the correct approach," he says.

Hartman has been making that argument in negotiations with Illinois lawmakers, who could vote on the bill before the end of the year.