Accessibility links
Patients Worry About Health Law's Fate In Arizona : Shots - Health News Corinne Bobbie has a love-hate relationship with the Affordable Care Act. As the GOP tries to repeal the law, the experiences and fears of voters like Bobbie could determine a politician's fate. 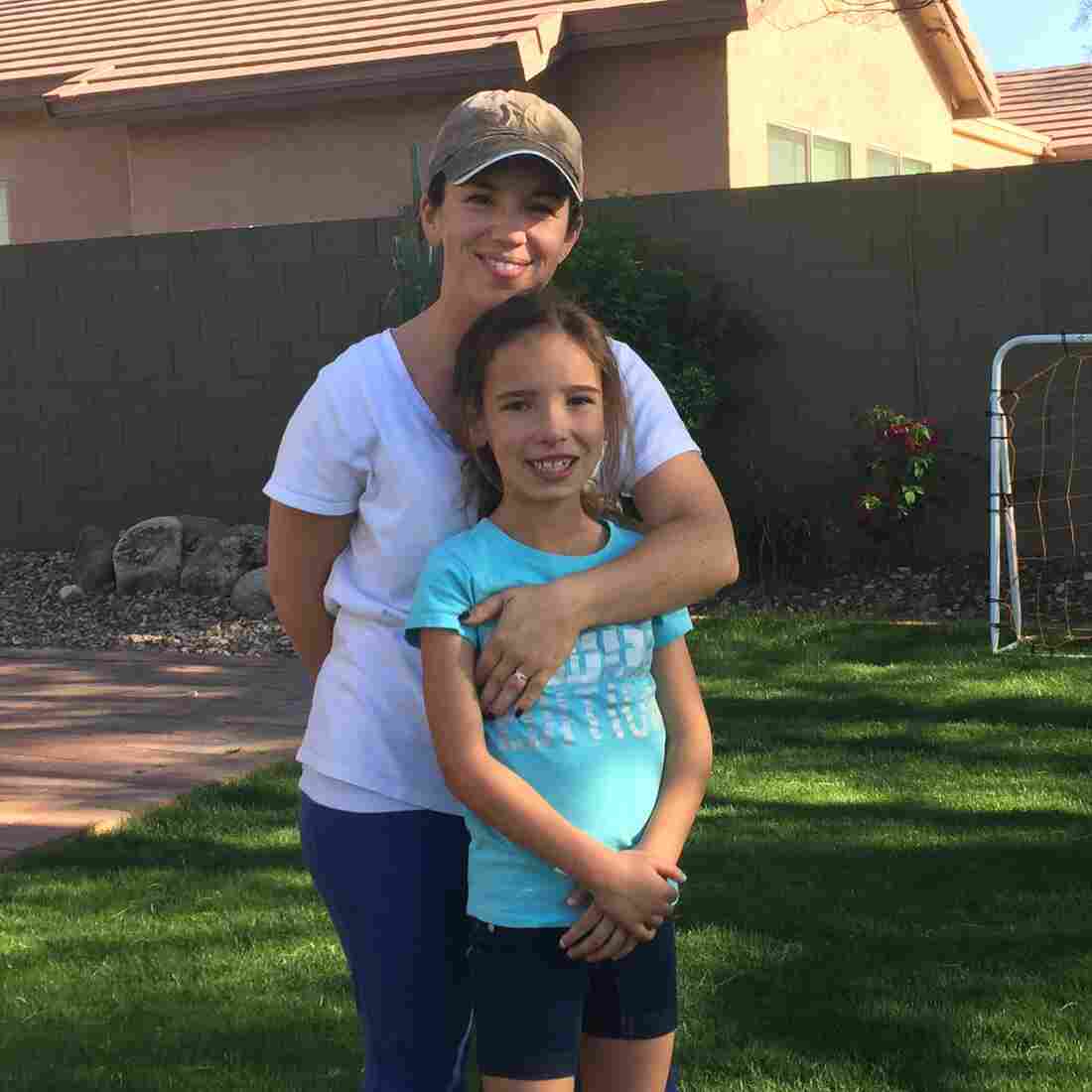 Corinne Bobbie says she is grateful that the Affordable Care Act guaranteed health insurance for her 8-year-old daughter, Sophia, who was born with a heart condition. But Corinne and her husband still can't afford coverage for the rest of the family. Will Stone/KJZZ hide caption

For years, says Corinne Bobbie, shopping in Arizona for a health plan for her little girl went like this:

On the day I visit the family at their home in a suburb north of Phoenix, 8-year-old Sophia bounces on a trampoline in the backyard. It's difficult to tell she has a complex congenital heart condition and has undergone multiple surgeries.

"She's a kid whose clock is ticking every day," her mother says, "but she goes to school, she rides horses. She does everything a regular kid can do with a certain level of limitation."

In the early years of Sophia's life, the child's pre-existing condition kept Bobbie and her husband, who runs a sandwich shop, on a constant quest for health coverage for Sophia. Her premiums alone were so expensive that the rest of the family often did without health insurance. The little girl's medical bills were still huge, and the family racked up debt and lost their car and home.

Then the Affordable Care Act, also known as Obamacare, came along. In 2013, the Bobbies bought good health insurance for Sophia on Arizona's exchange, for coverage to start the next year.

"For the first time in her life, we had a choice," Sophia's mom says. "I didn't know what do. My head was spinning."

Arizona's federally run marketplace was a success early on. There were lots of insurers and multiple plans that consumers could choose from, including many policies with low premiums. But that didn't last. This past year, when the couple tried to add coverage for themselves and their son, they couldn't afford it.

"It's more disappointing to be so in favor of something, but to have such animosity toward it at the same time," Corinne Bobbie says. "I'm angry about it. Why can't I have insurance, too?"

The family faced limited options — there was only one insurer to choose from in Maricopa County, where they live. The networks were narrow, meaning insurers didn't offer a lot of doctors and facilities in their plans. Furthermore, the Bobbies were looking at hundreds of dollars more in premiums and a $6,000 deductible for each person on the policy.

On the one hand, the ACA had finally guaranteed that someone like Sophia Bobbie — with her pre-existing medical condition — could apply for insurance and switch policies without risk of being turned down. And yet the plans on the marketplace were unaffordable for the rest of the family.

The Bobbies are the kind of consumers that should be the target audience for Republicans intent on repealing the Affordable Care Act. But, so far, Corinne Bobbie is far from sold on the alternative the GOP is proposing — the American Health Care Act.

"It's a bunch of garbage," she says. And about the lawmakers who passed it: "They could be the heroes. And instead it just became this nonsense."

Opponents of the effort to repeal Obamacare are tapping into this unease, running TV ads that accuse Republican moderates like Rep. Martha McSally, who represents Tucson, of voting for "a disastrous health care repeal bill."

"They are trying to put her in league with the extreme, hardcore Republicans in Congress," says GOP consultant Jaime Molera, who is a partner at Molera Alvarez.

Democrats think McSally and Sen. Jeff Flake, R-Ariz. — who are both up for re-election — are vulnerable. The politicians have a fine line to walk.

"It's a balancing act between being aggressive in wanting to repeal Obamacare," Molera says, "with the fact that there are a lot of components of it that people like."

Those components include protections for pre-existing conditions and Medicaid expansion, which has covered more than 400,000 people in Arizona alone.

The replacement bill would scale back that expansion, and the proposed curtailment concerns many Republicans in Arizona, including Gov. Doug Ducey.

The major cuts to Medicaid, however, probably won't survive in the Senate version, and Molera says that could actually help Flake.

"He doesn't have to take that extreme position in order to get out of a Republican primary," Molera says, "and then that affords him the opportunity to be more of a centrist running against the Democrats."

Among Republican incumbents in Arizona, Flake is likely in the toughest race, but Democrats are even taking aim at Republicans in safer districts like conservative Rep. David Schweikert, who represents Scottsdale and is a member of the House's conservative Freedom Caucus.

Schweikert says he voted for the GOP health plan in order to give states flexibility to transform Medicaid — through block grants, for example — even though that means less federal money for the state.

He admits his decision makes some in Arizona's health care industry nervous.

"They are concerned because they are quite comfortable with the current Medicaid model instead of a model that would provide a lot more choices," Schweikert says.

The state's health care industry has warned that the GOP bill would result in more people showing up in the emergency room without insurance coverage, leaving hospitals — and, ultimately, consumers — to pick up the tab.

Schweikert also claims the bill will help salvage the state's marketplace, which, he says, is "imploding."

"We can lower the price so much for that 50 percent that's healthy, that they'll start to participate in the system, because that's the only way the math works," Schweikert says, adding that the ACA's penalty system is not getting enough young people to join.

About 20 percent of people who signed up for Arizona's marketplace are between the ages of 18 and 34, according to the Kaiser Family Foundation.

The GOP bill is expected to bring down the cost of some premiums, but prices would rise significantly for those who are older or have pre-existing conditions, according to the Congressional Budget Office.

Schweikert also predicts that, as configured right now, the insurance marketplace will not survive for much longer, given the exodus of insurers in recent years.

"Today, you're lucky we have one," he says, "and tomorrow, you may have zero."

But Allen Gjersvig, who oversees enrollment for the Arizona Alliance for Community Health Centers, disagrees that the state's insurance exchange is in crisis.

"We believe that the two insurance companies that are covering Arizona will be back next year with the same footprint," Gjersvig says.

He also doesn't expect Arizona to see the same dramatic rate hikes it saw last year, calling that an adjustment for underpricing in previous years.

But with the current uncertainty about what is in store for the health care law, insurers are having a tough time planning for the future.

Gjersvig says the biggest unknown is whether the Trump administration will withhold key payments known as cost-sharing reductions; these payments to insurers help subsidize coverage for low-income people. If insurers lose those, Gjersvig says, the insurance premiums for consumers will go up.

All this uncertainty is also a problem for Corinne Bobbie.

She says the debate over the ACA has become a political game in which her family and others have been forgotten. She has one overriding fear: "We are potentially in a position where this time next year, nobody in this house will have insurance," Bobbie says. "If that happens, it's going to be ugly. It's going to be real ugly."

And the political fortunes of elected officials in Arizona and across the U.S. may well depend on voters like her family getting the care they need.

This story is part of NPR's reporting partnership with KJZZ and Kaiser Health News.