Accessibility links
Morocco Fossils Are 100,000 Years Older Than Earliest Recorded Modern Humans : Shots - Health News Scientists who found the fossils believe they are the remains of five people and far older than all previous finds. But how do the remains really fit into the bushy family tree of modern humans? 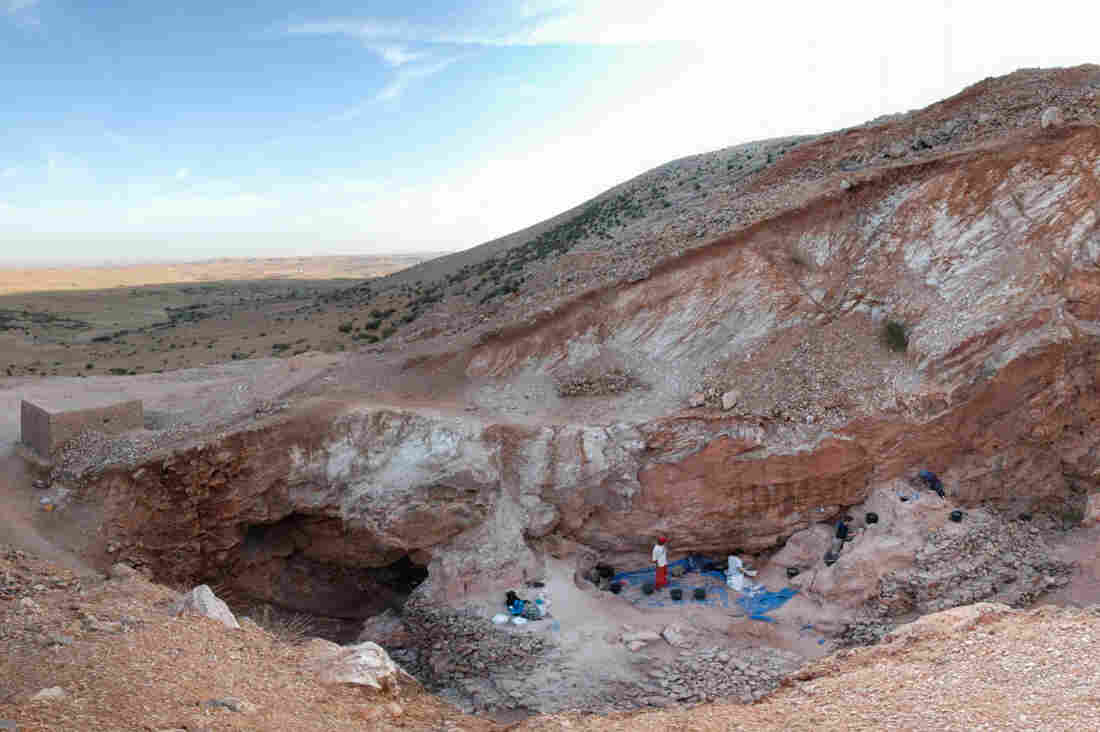 Paleoanthropologists carefully excavate the remains of five ancient individuals, discovered in what was once a large cave. The cave at what's now known as the Jebel Irhoud site in Morocco became buried, over the eons, under layers of rock and sediment. Shannon McPherron/Nature hide caption 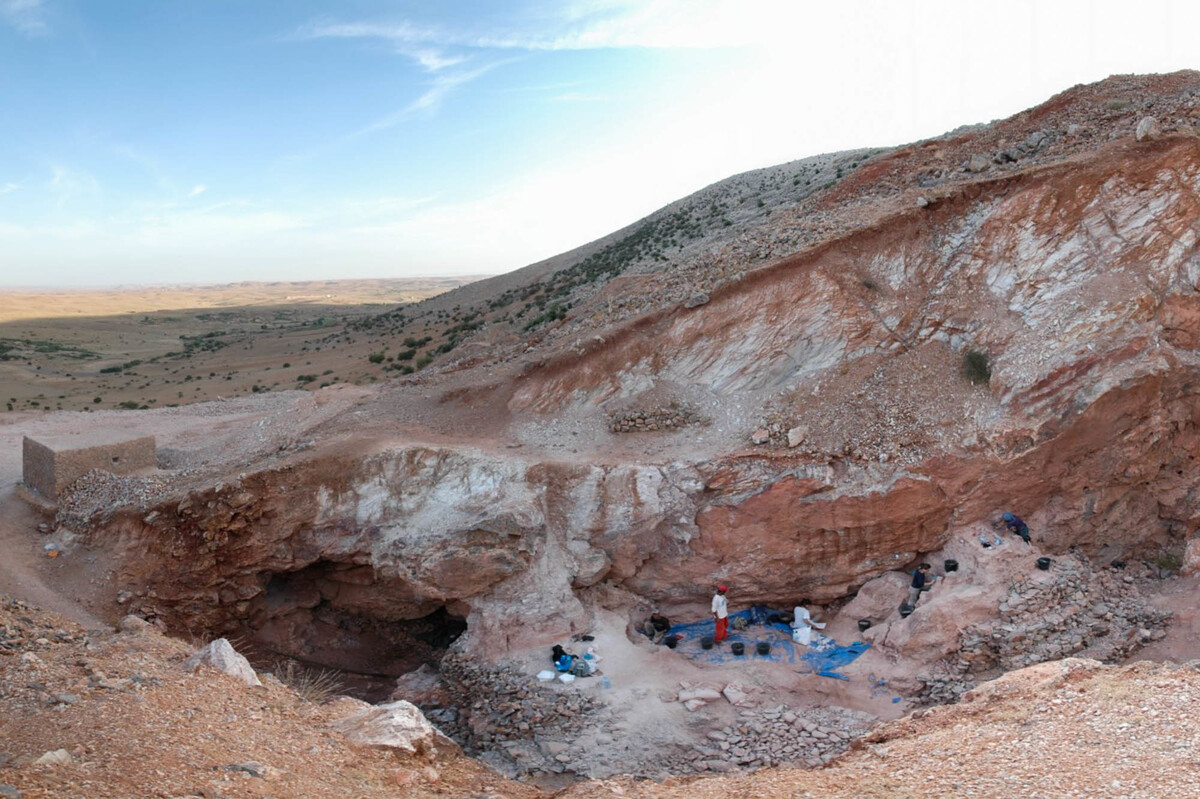 Paleoanthropologists carefully excavate the remains of five ancient individuals, discovered in what was once a large cave. The cave at what's now known as the Jebel Irhoud site in Morocco became buried, over the eons, under layers of rock and sediment.

A team of European and Moroccan scientists has found the fossil remains of five individuals who they believe are the most ancient modern humans (Homo sapiens) ever found.

In a remote area of Morocco called Jebel Irhoud, in what was once a cave, the team found a skull, bones and teeth of five individuals who lived about 315,000 years ago. The scientists also found fairly sophisticated stone tools and charcoal, indicating the use of fire by this group.

The researchers' claim is controversial, however, because anthropologists are still debating exactly what physical features distinguish modern humans from our more primitive ancestors.

Virtual palaeoanthropology is able to correct distortions and fragmentations of fossil specimens. This reconstruction of the mandible from the Morocco specimen known as Irhoud 11 allows its comparison with archaic hominins, such as Neanderthals, as well as with early forms of anatomically modern humans.

Archaic forms of humans — other, earlier species of Homo — emerged more than a million years ago. Exactly how and when our species — Homo sapiens — evolved is a mystery. Up to now, the oldest known bones widely recognized as Homo sapiens were from people who lived in East Africa about 200,000 years ago. The new discovery in Morocco would push the date for the emergence of our species back another 100,000 years.

Jean-Jacques Hublin directs the department of human evolution at Germany's Max Planck Institute for Evolutionary Anthropology. He led the team that found a skull, bones and stone tools. 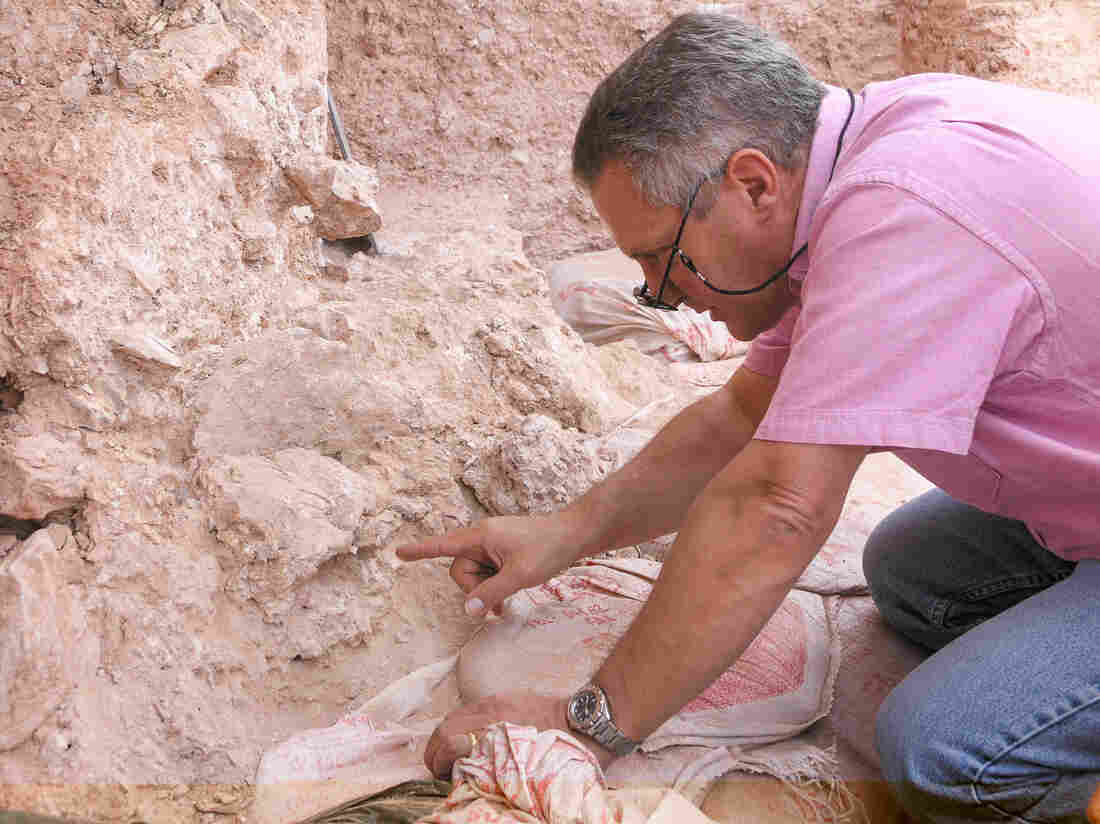 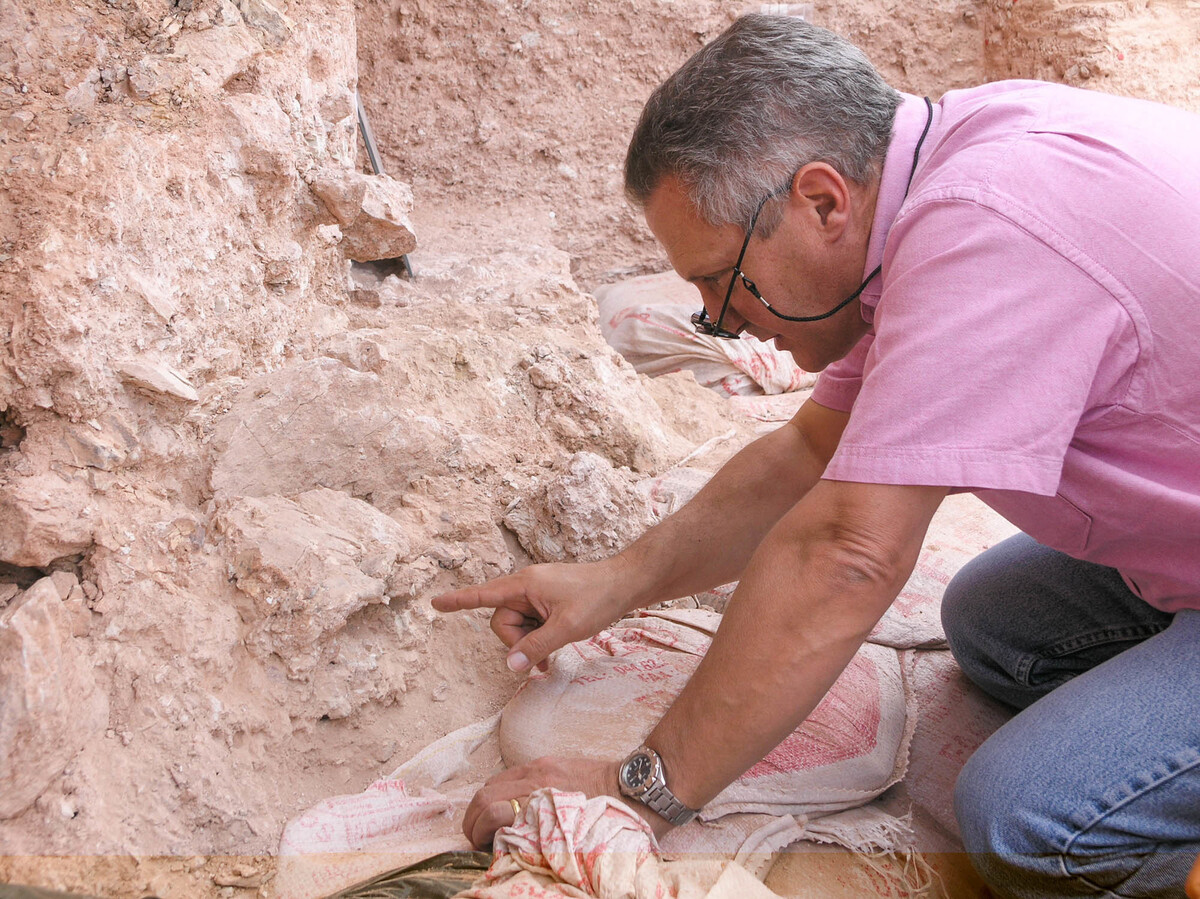 Max Planck Institute paleoanthropologist Jean-Jacques Hublin examines the new finds at Jebel Irhoud, in Morocco. The eye orbits of a crushed human skull more than 300,000 years old are visible just beyond his fingertip.

"This material represents the very root of our species, the oldest Homo sapiens ever found in Africa or elsewhere," he says.

It's a big claim, described in detail in Hublin's report Wednesday in the journal Nature. Others in his field are skeptical, among them paleoanthropologist Rick Potts, who runs the human origins program at the Smithsonian's Museum of Natural History. He says some of the skull's features, especially its elongated cranium and the shape of the face, suggest it could be a more primitive ancestor of modern humans.

"The new finds from Morocco are a kind of snapshot in that whole process of transition from archaic to us," Potts says. He suspects it's a snapshot from a period just before modern humans evolved.

This is a common argument in anthropology — where does a newly discovered fossil, especially one with a mix of ancient and more modern features, fit in the bushy family tree of human ancestry?

This composite reconstruction of what its discoverers believe is the earliest known Homo sapien fossil was based on scans of multiple specimens. The virtual imprint of the braincase (blue) indicates that brain shape, and possibly brain function, evolved within the Homo sapien lineage, the scientists say.

Chris Stringer, an anthropologist at London's Museum of Natural History, says even if the Moroccan skull is a bit of a mashup of modern and archaic features, it's still one of us. "As evolution happens, as we go back in time," he says, "they are going to look less like modern humans. ... They have faces which are really like bigger version of our faces."

Stringer and Hublin suggest that the elongated cranium, or braincase, may have been one of the last things in the human line to evolve to what it looks like now (more globular, as anthropologists describe it), perhaps as the brain grew more connections and became more sophisticated.

What is clear, now more than ever, is that humanity's ancestors, and eventually early forms of "us," were popping up all over Africa. They evolved in eastern Africa, southern Africa and now, apparently, northern Africa. And it's increasingly evident that these ancestors moved all over the continent, swapping tool technology as well as genes.

"If there was a 'Garden of Eden'," Hublin says metaphorically, "it's Africa. So the Garden of Eden is the size of Africa." And eventually, after all that evolutionary experimentation on the human form, the current form evolved — somewhere yet to be determined.