Accessibility links
A Father Takes His Son To The Doctor And Discovers Fear : Shots - Health News As a science journalist, I know vaccines are safe. But when it was time to take my son to get his shots, I suddenly found myself overwhelmed by fear. Does science stand a chance against emotion? 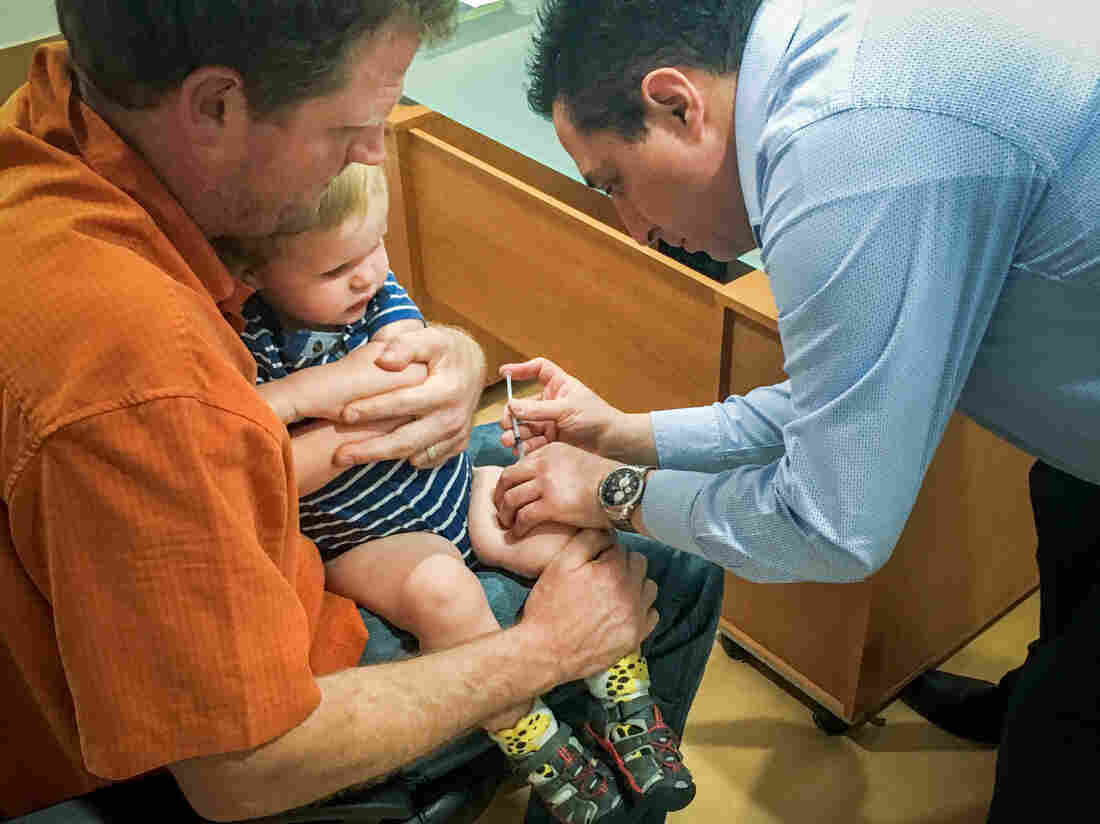 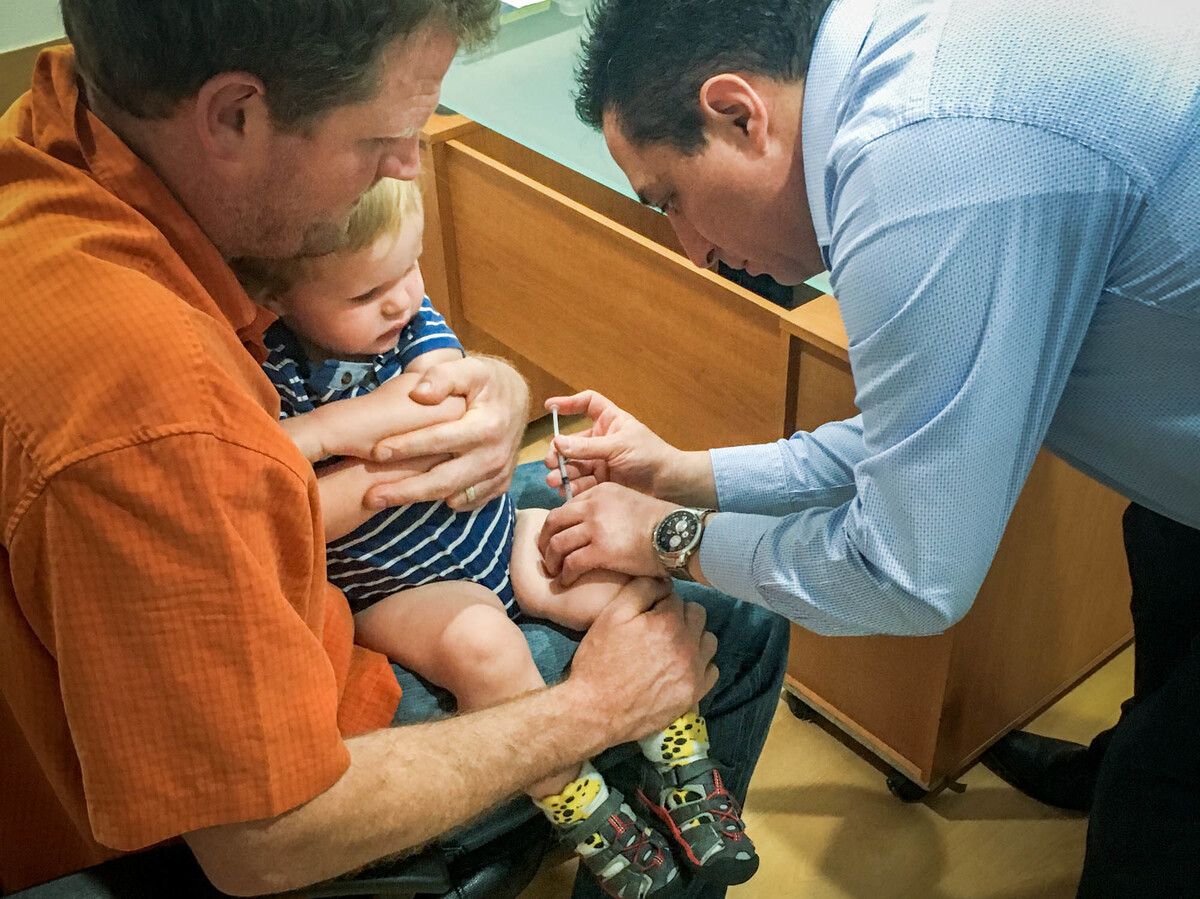 Erik Vance holds his son while a pediatrician administers vaccinations.

I am a man of science. Okay, perhaps not of science, but certainly near it. As a science journalist, I'm science-adjacent. But I consider myself to be bound by logic and facts.

Which is why it was weird when I took my infant son in for his first vaccines and started peppering his pediatrician with questions. I inspected the boxes, telling myself that I was concerned about a recent bad batch of vaccines in Chiapas, Mexico, that made a bunch of kids sick. But really, I was looking for a label that read "not the autism kind of vaccine."

I felt really uncomfortable and started to sweat. I looked at the clear liquid in the vials and wondered, will I regret this for the rest of my life? I started to think about maybe delaying the injections until it was safer or maybe stretching them out over a longer period of time. I mean, it just can't be safe giving all these vaccines at once.

Seriously? I've spent years following the vaccine safety debate, reading the stories and writing a few about how safe and effective vaccines are. And yet here I am putting my entire profession to disgrace, just as scared and confused as anyone else. In that moment, I wanted to slap my brain upside the temporal lobe. The sight of one little needle was turning me into a raging anti-vaxxer.

Before I go any further, just so we are clear, every scrap of reliable data confirms that vaccines are a safe and crucial part of medicine. Plenty of very clever people have pointed out that they have very few risks and many benefits, which accrue not only to the child being vaccinated but also to society at large. And there is abundant evidence that they don't cause autism. 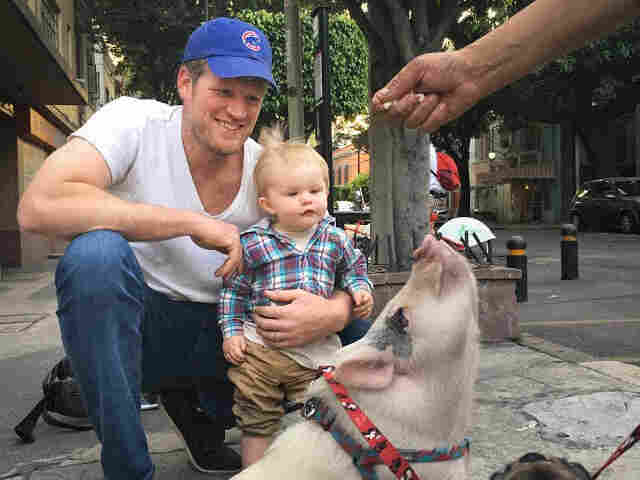 Father and son meet up with the pet pig often seen in their neighborhood in Mexico City. Courtesy of Erik Vance hide caption 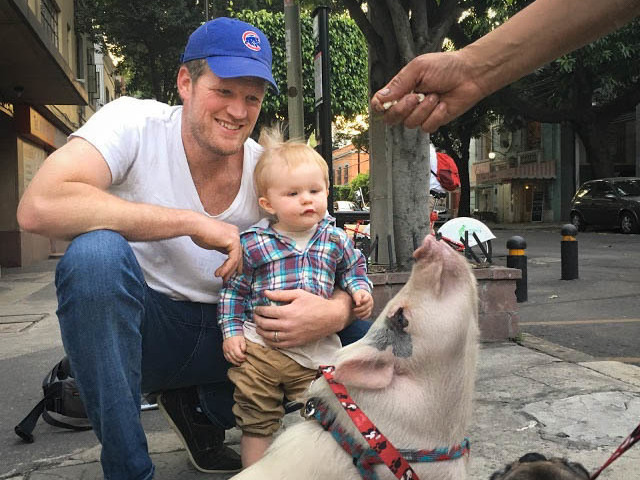 Father and son meet up with the pet pig often seen in their neighborhood in Mexico City.

But this is not a post about vaccines or autism or even evidence. This is a post about fear. If there is one thing that psychologists can say for sure, it's that fear is more deep and powerful than just about any other emotion we can experience.

In my book, Suggestible You, I note that while placebos can be incredibly potent in treating some (often chronic) diseases, their alter egos — nocebos — are reliably more so. Nocebos occur when something unhealthy happens to your body, solely based on belief. They can be as simple as feeling slightly more pain during an experiment just because a doctor says you should or as complex as side effects for placebo pills, or mass hysteria. Perhaps the best example of a nocebo in pop culture would be a curse. (In the book, I even get cursed myself at one point.) In other words, if placebos are hope, nocebos are fear.

Scientists have found that nocebos are easier to create than placebos — and last longer. So fear is more powerful in the body than hope. Saying "fear is a powerful thing" is a little like saying "money can come in handy" — it kind of undersells it. Fear is the No. 1 tool for selling newspapers, insurance, snake-oil medicine and Swedish cars. Sometimes that's a good thing, and sometimes it's not. It's what kept our ancestors alive for millions of years, and it's history's favorite way of selling political ideology.

So it's not surprising that fear forces people to accept some strange ideas about medicine. The most tragic and extreme of these are cancer patients so terrified of modern cancer therapies that they turn toward more "natural" solutions and shun proven treatments that could have saved their lives.

I would gladly suffer a few rounds of chemotherapy to prevent harm from coming to my child. The bottom line is that what happens to me when I go in for my kid's shots has nothing to do with vaccines or mercury or thimerosal or any science whatsoever. It's about fear and a loss of control.

Maybe I've done one too many stories on autism and crossed some kind of threshold. So that is how I ended up sweating when I was in the doctor's office again two weeks ago, waiting for the 18-month vaccination that would protect him from diphtheria, meningitis, whooping cough and tetanus. Here I was again, deeply ashamed yet still wondering whether we should put off the shot until it was "safe."

But I knew I could never make the shot, or the world, as safe as I would like. Safe from what? I don't know, I just want my baby to be safe all the time, OK? And do you have any smaller needles?

The doctor asked me to restrain my son, who looked at me a little bewildered but trusted his daddy. Then the doctor injected four neutralized pathogens into his legs. The baby screamed for a few seconds with what I assumed was a deep sense of personal betrayal before the doctor deftly pulled out a tin of lollipops and slipped one into his mouth. I gotta give the guy some credit; the kid shut right up and went to work on the candy. 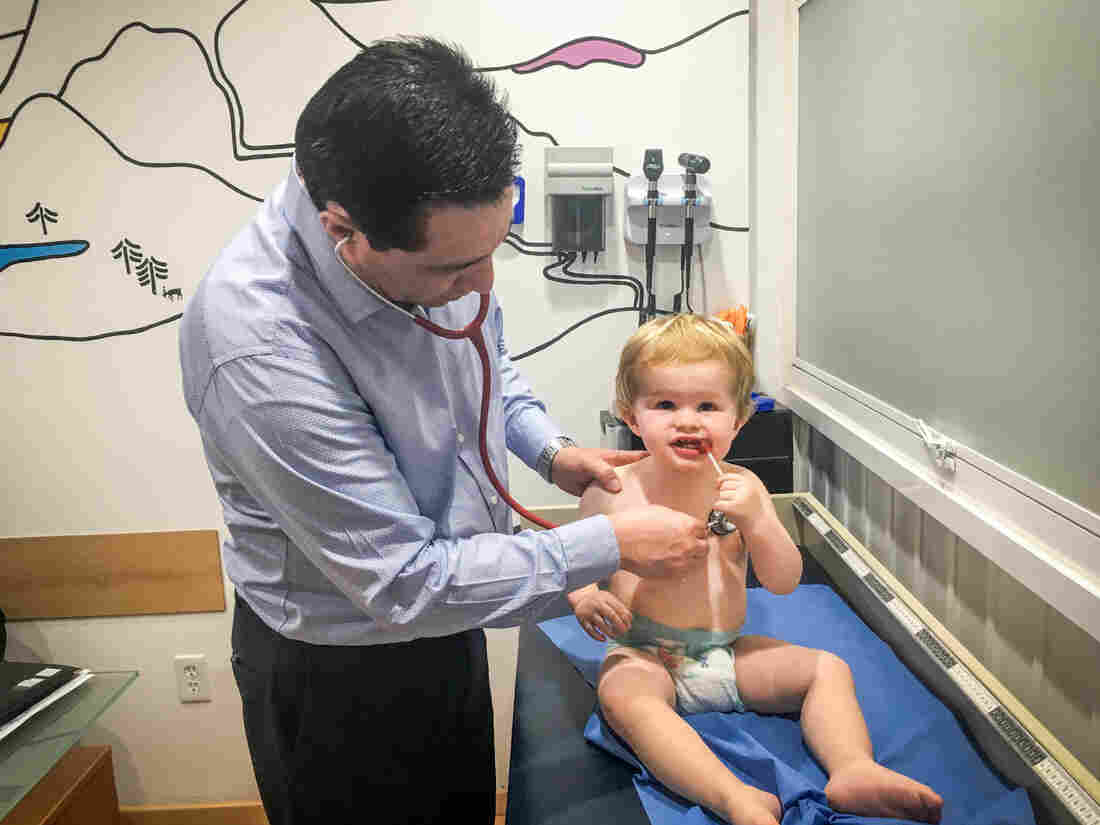 At a checkup in May, a lollipop makes everything OK, even as Dad finds himself consumed with what he admits is irrational fear. Courtesy of Erik Vance hide caption 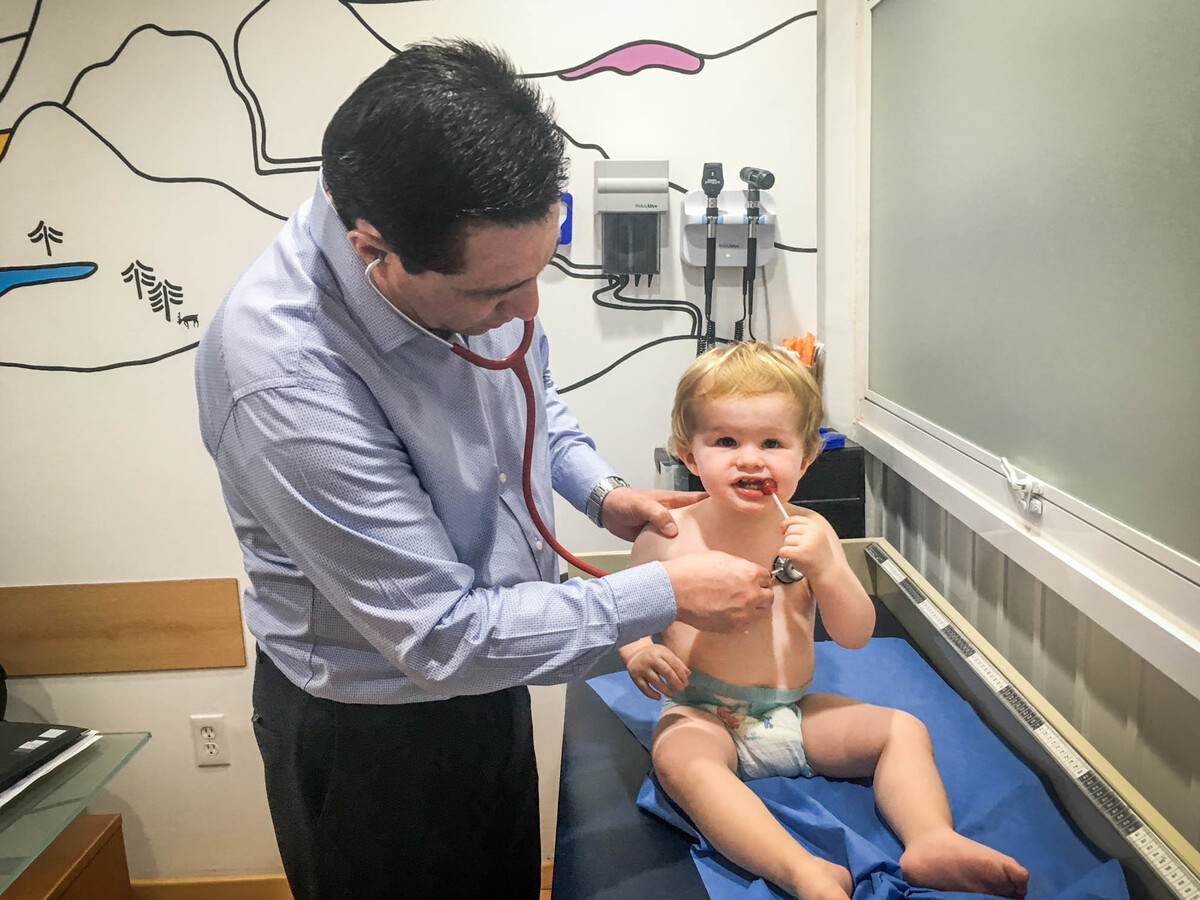 At a checkup in May, a lollipop makes everything OK, even as Dad finds himself consumed with what he admits is irrational fear.

Then at that moment, I had a realization. If fear is more powerful than hope and this could happen to a fundamentally rational person like me, then what hope does science really have? What chance does "This is a well-studied, safe intervention" have against "Holy s***, I might be ruining my child!"?

Now go beyond that to other issues where fears and tribal loyalties conflict with reason, like GMOs, climate change or evolution. How can rationality win when irrationality is so much more attractive? I sat in the doctor's office staring into space, now terrified of something totally different.

The doctor looked at me for a second, then grabbed his tin and pushed it at me. "Maybe Daddy wants a lollipop, too?"

Vance is the author of Suggestible You, which was supported in part by the Pulitzer Center on Crisis Reporting. A version of this essay appeared on the blog The Last Word On Nothing.

An earlier version of this essay referred to a problem with vaccines in Oaxaca, Mexico. It actually happened in Chiapas.