Accessibility links
Will Baby Boxes Really Keep Children Safer? : Shots - Health News New mom Maisha Watson uses one of the 20,000 cardboard boxes given out so far in New Jersey. She's glad to have a safe spot for her son to sleep. But some question the boxes' safety and effectiveness. 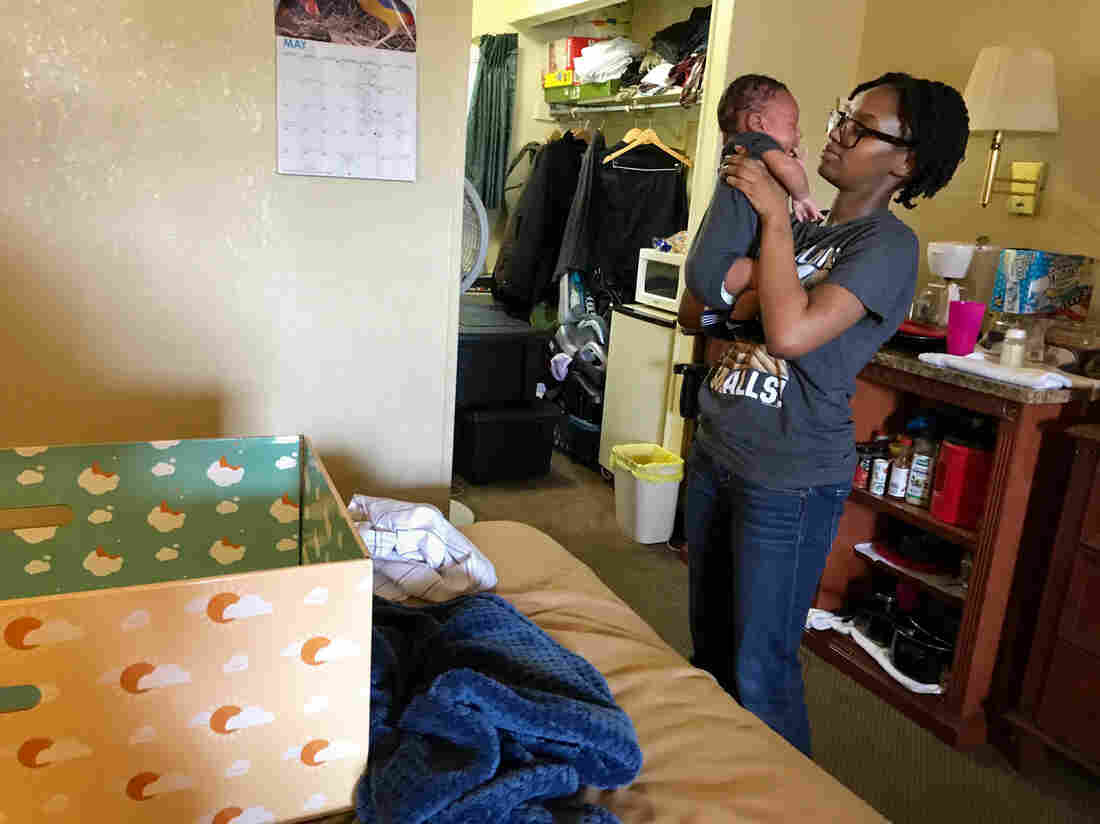 New Jersey has been distributing baby boxes — cardboard containers that double as cribs or bassinets — to new parents since January. Maisha Watson is currently living in a motel outside Atlantic City, N.J., with her infant son, Solomon Murphy. With no room for a crib, Solomon sleeps in the baby box. Rebecca Davis/NPR hide caption 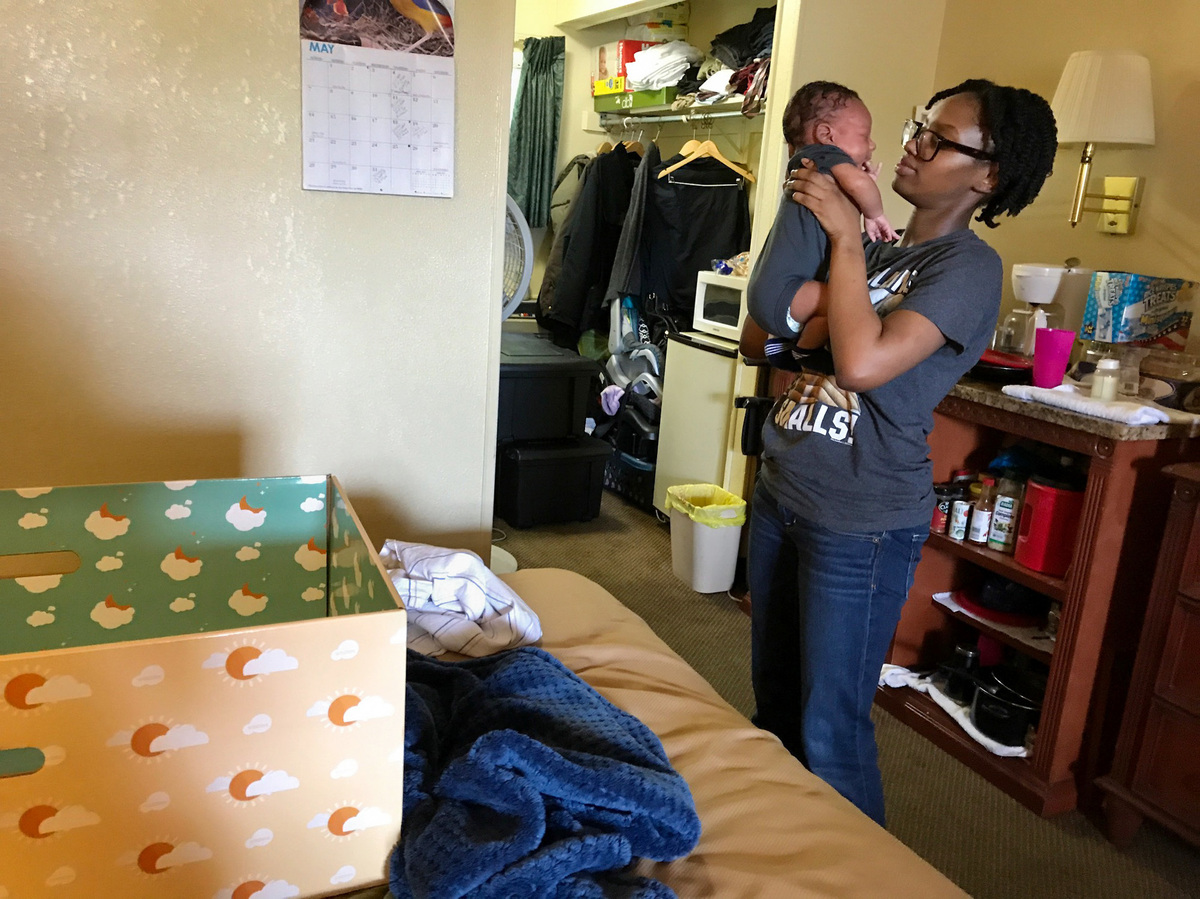 New Jersey has been distributing baby boxes — cardboard containers that double as cribs or bassinets — to new parents since January. Maisha Watson is currently living in a motel outside Atlantic City, N.J., with her infant son, Solomon Murphy. With no room for a crib, Solomon sleeps in the baby box.

When Maisha Watson heard about baby boxes, her first reaction was: "Why would I want to put my baby in a box?"

She was talking with Marcia Virgil — "Miss Marcia" to her clients — a family support worker with the Southern New Jersey Perinatal Cooperative.

True, it's a cardboard box, Miss Marcia told her. But it's also a safe place for a baby to sleep: It comes with a firm mattress and a snug sheet, in line with American Academy of Pediatrics recommendations meant to protect against sleep-related deaths, including sudden infant death syndrome, or SIDS.

Watson learned more, and now the mother of 1-month-old Solomon is a big fan. Solomon has slept in a baby box ever since he came home from the hospital.

That's because he's living with his mom and dad in a cramped motel room outside Atlantic City, N.J. Watson has lived here for about a year, after a bad car accident made it hard for her to work and stay in school.

There's no space for a crib or a bassinet. And Watson knows it's dangerous for a baby to sleep on a bed.

The box they're using is one of roughly 20,000 that New Jersey has given away since January as part of the first program to provide a box to every newborn in the state. Since then, Ohio, Alabama and Texas have started similar programs, with more on the way.

The idea is borrowed from Finland, where for decades, in exchange for a prenatal checkup, the government has given expectant mothers a maternity package that includes a box that doubles as a crib. With the new state-sponsored programs in the U.S., anyone who watches a series of online videos focused mainly on safe sleep — and then passes a short quiz — can get a box.

Supporters say the free, cheerfully decorated box is just a cool hook, and that the heart of the program is to teach all parents about simple, proven ways to help keep their babies safe while sleeping. Moms like Watson are already finding the boxes useful.

But skeptics say there haven't been enough studies or enough testing done on the boxes to prove whether they're safe or effective at preventing infant deaths.

The American Academy of Pediatrics notes: "Currently, there is insufficient data on the role cardboard boxes play in reducing infant mortality."

Moreover, there are unanswered questions about the boxes' safety, says Dr. Thomas Heygi, medical director of the SIDS Center of New Jersey.

For instance, he says, will bacterial growth increase if the cardboard gets wet? Or are there glues or emissions that could cause dermatitis or that babies could inhale?

Hegyi says enthusiasm for the boxes has outpaced the science. And that worries him, because there are many things that sounded like a good idea for newborns but ended up being dangerous, he says, citing crib bumpers as one example.

"We're very concerned as pediatricians in adopting interventions for babies without thoroughly testing them, because historically we've been burned," he says.

There is work underway to address safety and testing concerns. A task group of the independent standards organization ASTM International is looking at expanding the standards for bassinets to cover baby boxes.

The current ASTM bassinet standard already addresses issues such as sharp edges, small parts, finger entrapment and mattress suffocation hazards. The task group, which next meets later this month, is considering the development of requirements for additional hazards associated with baby boxes. In addition to the questions raised by Hegyi, the task group is considering issues such as the boxes' stability, handle strength and product integrity, among others.

But it will likely take at least a year before they're finalized and formally adopted.

Solomon has slept in a baby box since he came home from the hospital a month ago. Family support worker Marcia Virgil reminds Solomon's mother that it's not safe for babies to sleep with blankets. Rebecca Davis/NPR hide caption

Solomon has slept in a baby box since he came home from the hospital a month ago. Family support worker Marcia Virgil reminds Solomon's mother that it's not safe for babies to sleep with blankets.

In the meantime, the California-based Baby Box Company, which produces the boxes and videos used in the program, says it has tested the boxes against relevant bassinet standards and has posted documentation of its voluntary safety testing on its website.

Dr. Kathie McCans is chair of the New Jersey Child Fatality and Near Fatality Review Board, which is using a $40,000 federal grant to partner with the Baby Box Company for the state program.

McCans agrees that standards, regulations and more testing are needed. But she says the benefits of the baby box program's educational component outweigh potential risks.

Proponents point to the long track record of Finland, which started distributing baby boxes in 1938, at a time when nearly one out of every 10 children in the country died before age 1.

Finland now has one of the world's lowest infant mortality rates, but many say that's a result of improved medical care and social safety nets, not use of baby boxes. In fact, a recent survey found that the majority of Finnish parents these days don't use the box as a crib.

But the Finnish government notes clearly that the box can be used that way — and was used that way more frequently in the past, when Finland was a less wealthy country.

Ultimately, McCans and other supporters say you can take or leave the baby box — just be sure to take the knowledge.

"My hope is that we will not have people making the errors of putting a baby in a sleep surface that has blankets and pillows and crib bumpers, that everyone will know that every baby needs to be put to sleep on their back each and every time," she says.

In New Jersey, most sudden unexpected infant deaths are related to sleep — a baby sharing a bed with an adult, or being suffocated by a blanket.

Parents can do a lot to reduce the risk of SIDS, McCans says, and the goal is to spread that message — using a cute, free baby box as the incentive.