Accessibility links
In Texas, People With Shifting Income Risk Losing Medicaid : Shots - Health News Families with income that varies from month to month can find it hard to maintain enrollment in Texas' Medicaid program. The question is whether the program trims waste or creates more red tape. 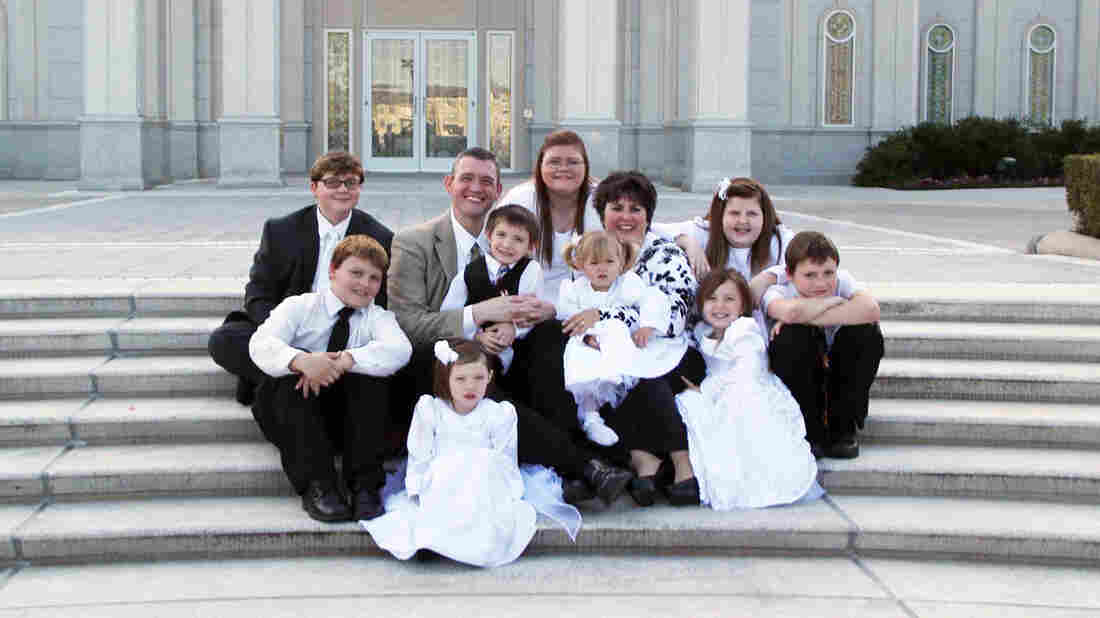 Dawn Poole and her husband have to regularly document their family finances to make sure their nine children, who all have complex health conditions, continue to qualify for Medicaid. Courtesy of the Poole family hide caption 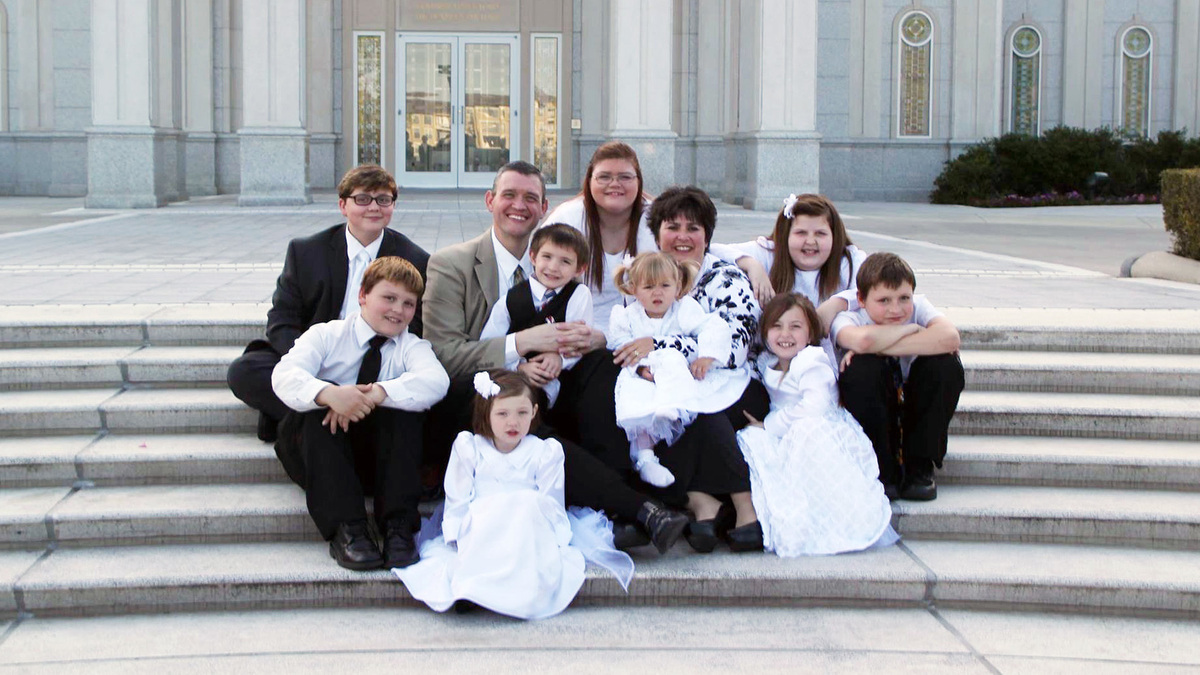 Dawn Poole and her husband have to regularly document their family finances to make sure their nine children, who all have complex health conditions, continue to qualify for Medicaid.

Courtesy of the Poole family

Worries about whether her children can still get the health care they need are never far from Dawn Poole's mind. It's a constant, underlying concern.

Much of her anxiety is a direct result of living in Texas. To qualify for Medicaid in the state, most children must come from families with incomes at or below 138 percent of the federal poverty level. In 2017, that's $33,948 for a family of four.

Texas also has one of the country's strictest Medicaid verification systems: It runs regular checks on family finances after children are enrolled to make sure they continue to qualify.

Those frequent checks are the cause of Poole's angst.

She and her husband work in seasonal industries. She's an hourly employee in agriculture and he's in oil. Their hours and incomes change on a monthly, even weekly basis. That means their nine children, five of whom were adopted, and all of whom have complex health condition, could lose health insurance one month but then qualify the next, even though the family's total income for the year does not exceed the eligibility threshold.

"You have to show all the pay stubs and your information and where you're working and what you're doing," Poole says, outlining the paper trail she must maintain for these eligibility checks. If not, she says, she receives notices from the state with a clear message: "You need to have this done now, or we will drop coverage."

It's not an empty threat. State figures suggest the number of children who have temporarily lost Medicaid has shot up since Texas started verifying in 2014.

Stories like Poole's may become more common, as giving states more flexibility to design and administrate Medicaid is a critical part of the GOP plan to overhaul the program. The idea is that less federal oversight will cut bureaucratic runaround and trim wasteful spending. But detractors point to policies in states like Texas that already have significant leeway as a prime example of how a state's well-intentioned efforts can lead to more red tape and limit access to care.

"I just find it amazing that a state that says that it needs to have ... new flexibility to innovate is engaged in something this harmful and burdensome," says Sara Rosenbaum, a health policy and law professor at George Washington University.

Texas starts income tests five months into a child's coverage, when an automated system runs through several databases to ensure the family's income hasn't climbed above the eligibility cap. The test repeats in the sixth, seventh and eighth month of the year. If at any point the family's income crosses the line, they have 10 days to prove otherwise. If they fail, they lose coverage.

If families have multiple children who enrolled in Medicaid at different times, say, because the enrollment happened as a result of a specific brush with the health care system, the income checks are pegged to each child's start date, not done simultaneously — which means even more paperwork for parents.

Systems with such frequent checks aren't common, says Tricia Brooks, a senior fellow at Georgetown University's Center for Children and Families. Neither she nor any other researchers interviewed for this story had heard of other states using a comparable level of scrutiny for children.

State officials say that the practice is a "program integrity initiative."

"The goal is to make sure, if people are getting the benefit, it's because they're eligible," says Christine Mann, a spokeswoman for Texas' Health and Human Services Commission.

This concept of program integrity is one way that states control enrollment, and potentially curb costs. But Texas has not tracked the financial impact of this aggressive testing regimen. Mann says it's not a relevant concern.

While proponents say enforcing program integrity can cut costs, critics say the argument doesn't hold up. Nationally, children account for more than two-fifths of Medicaid's enrollment, but are responsible for less than one-fifth of program spending. Seniors and people with disabilities, who generally require more health services, drive about half of Medicaid costs. So kicking children whose families' incomes exceed the threshold doesn't necessarily hold costs down, particularly when eligibility is reinstated within a few months and sometimes retroactively.

Instead, the skeptics add, the verification checks pose logistical hassles, require greater resources and save little money upfront. And it can have long-term impacts on kids' health.

Still, some say there is value to the approach, at least on paper.

"Texas is not wrong to check eligibility," says Robert Moffit, a senior fellow at the right-leaning Heritage Foundation. "It just seems that going through this every month is an administrative burden that is probably not necessary."

Is The Goal Efficiency?

Poole is not alone. At Conroe's Lone Star Community Health, a community health center in Poole's hometown, near Houston, most Medicaid patients are children, says CEO Karen Harwell. Almost all come from families with hourly jobs. A family like Poole's could make $2,000 one month and $100 the next, losing coverage for August but re-qualifying three weeks later.

Texas has not tracked how many children lose coverage because of income testing. But in September 2014, a month before this practice began, just under 10,000 children on Medicaid faced a gap in coverage of three months or less. By June 2016, the most recent month for which Texas could provide statistics, almost 23,000 children experienced such a gap.

Meanwhile, internal data kept by the Texas Association of Community Health Centers suggests that in a single month, about 5.6 percent of Medicaid-covered children will lose insurance because of income testing, and a third of that group will regain coverage within three months.

"Over the course of the year, the percentage of children put through the wringer is huge," Rosenbaum said.

But Texas is not measuring the cost of its enforcement program. And critics say the number of children who cycle back onto Medicaid fairly quickly means it can't be saving that much, but the potential to keep kids from needed health care is significant. "This is obviously not a huge money saver. It's a culture thing, an attitude thing," says Anne Dunkelberg, associate director of Texas' left-leaning Center for Public Policy Priorities.

Of course, saving money isn't everything, says Matt Salo, executive director of the National Association of Medicaid Directors. A state like Texas may place inherent value in only providing a publicly funded service to the most needy, regardless of cost. And state flexibility can breed innovation, others noted.

"There are some states we think would run very good Medicaid programs with more flexibility. And there are other cases where, if you have a little more flexibility, they do not-good things," says Leighton Ku, who directs George Washington University's Center for Health Policy Research and has researched the consequences of interrupting children's coverage.

Still, the calls for Medicaid flexibility have been accompanied by proposed federal funding cuts — the argument being that state-based ideas will yield enough savings to make up for the loss. Critics counter that notion is hardly a sure thing.

"To think they're going to find enough savings in their programs or could raise taxes to offset the loss of federal funding is highly suspect," Brooks says. "Instead, then, states have to make tough choices. And those choices are not going to be good for kids and families."