Accessibility links
Half Of People Surveyed Don't Know Where To Find The Defibrillator At Work : Shots - Health News People who work in the hospitality and service industries were even less likely to know where to find an AED, according to a new survey. The devices can restart someone's heart after cardiac arrest.

Can You Find The Defibrillator At Work? Half Of People Say No

Can You Find The Defibrillator At Work? Half Of People Say No 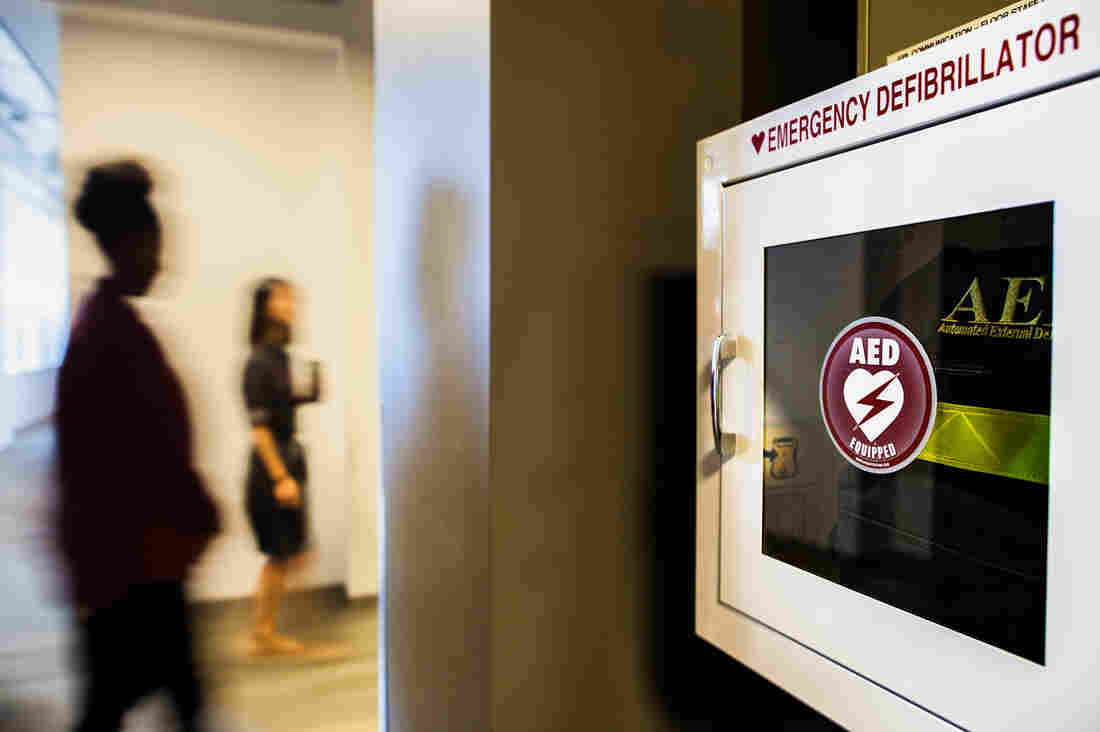 About 10,000 cardiac arrests happen in workplaces each year, according to the American Heart Association. Using an automatic external defibrillator can increase the chance of survival. Shelby Knowles/NPR hide caption 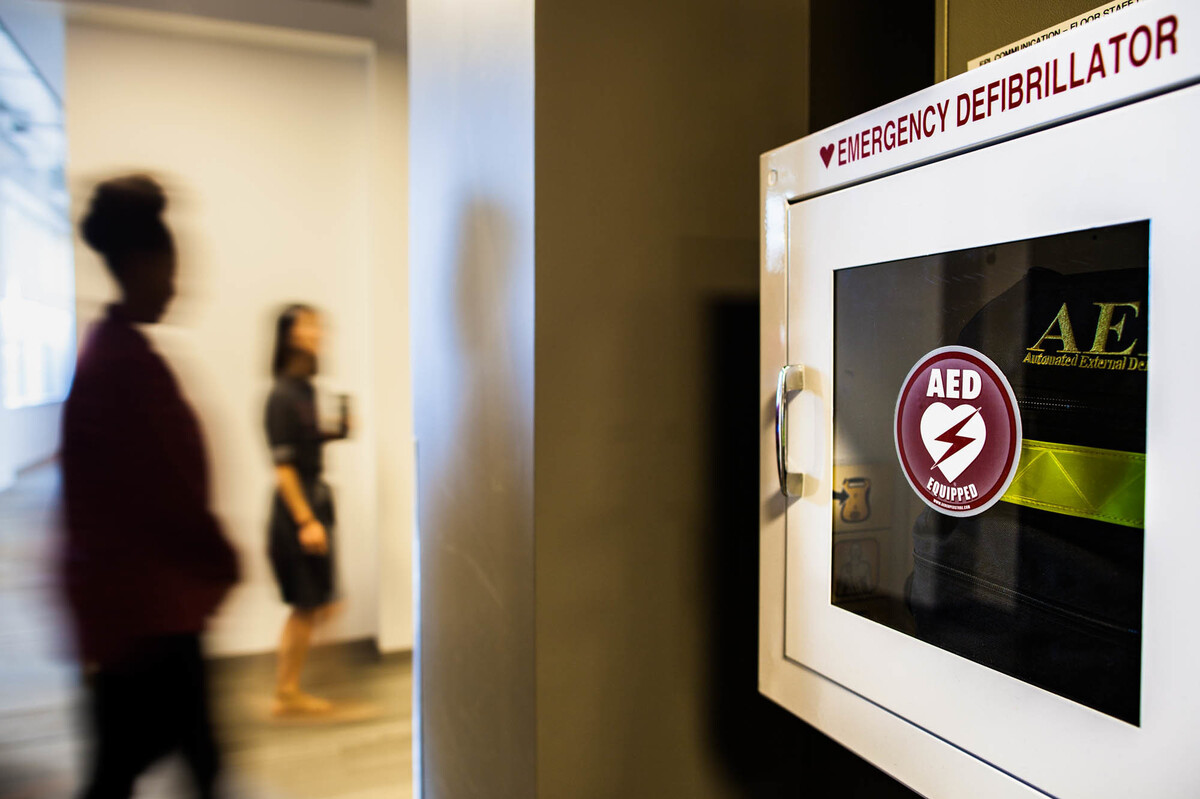 About 10,000 cardiac arrests happen in workplaces each year, according to the American Heart Association. Using an automatic external defibrillator can increase the chance of survival.

Do you know where your workplace's automated external defibrillator is located? About half of all U.S. employees don't, according to the results of an American Heart Association survey.

The survey also found that workers in the hospitality and service industry, which includes hotels and restaurants, were less likely to know the location of their workplace's AED. About 66 percent of them didn't know where it was. Workers in schools and other education facilities were the most likely to be able to find it: About 61 percent said they knew the AED's location.

However, the survey didn't follow up and ask whether the workplace had an AED, and also didn't try to distinguish between who didn't know where the AED was and those who didn't know if there was an AED on site. That makes the findings less clear.

Still, the low numbers surprised Dr. Michael Kurz, an associate professor of emergency medicine at the University of Alabama-Birmingham and an American Heart Association spokesperson.

"For every minute that you're in cardiac arrest, you're pulseless, your [chance of ] survival drops by 10 percent," Kurz says.

An AED checks the heart's rhythm and can send an electric shock to the heart to try to restore a normal rhythm.

More than 350,000 cardiac arrests take place in the U.S. in locations other than hospitals each year, according to the American Heart Association. In 2015, Nancy Holland, a resident of Leawood, Kan., became one of them.

She went into cardiac arrest in the restroom of a restaurant where she had been eating dinner with her husband. The restaurant's manager performed CPR until paramedics arrived with an AED.

Holland says she's lucky the restaurant's manager knew CPR, because it kept her "salvageable" until the paramedics showed up. When he started working as a restaurant manager, she says, his mom had told him he owed it to the customers to learn CPR — just in case.

Now whenever she walks into a building, she scans the walls looking for an AED.

"I hope I never need it, but it's always in the back of my mind," Holland says.

She also gives talks about the importance of CPR and AED training, emphasizing that cardiac arrest can happen to anyone.

Holland was in her 40s and didn't have any health problems when she went into cardiac arrest. She had been to her doctor for a checkup just three weeks earlier.

Could Drones Help Save People In Cardiac Arrest?

And she's now a board member of her local chapter of the HeartSafe Foundation, which provides free training in hands-only CPR and works to improve public access to AEDs.

She also says businesses should take precautions before an emergency happens.

About 10,000 cardiac arrests happen in workplaces each year, the AHA says.

More than half of employees — about 55 percent — aren't offered first aid or CPR/AED training through their employer, the American Heart Association survey found. And sometimes employees have access to only one form of training.

But most of the 2,000 employees surveyed say their employers should offer first aid and CPR/AED training. Ninety percent say they would participate in training if their employers provided them.

Cost and fear of liability are two reasons that businesses don't install AEDs, Kurz says, but those are misperceptions.

A typical AED costs about $1,200 to $1,500, Kurz says, and prices have gone down over time as the technology becomes more widespread. Machines that once cost $3,000 now run under $1,000, according to the National Conference of State Legislatures, which tracks the passage of laws related to AEDs.

When it comes to legal liability if an AED is used improperly and someone is injured or killed, Kurz says in most states you're protected by law.

In addition, AEDs have a built-in mechanism for analyzing heart rhythms and evaluating whether a shock is needed.

But AEDs do need to be maintained in order to be effective. Batteries should be replaced every two to five years, depending on the model. And the sticky pads that adhere to a cardiac arrest victim's skin also come with expiration dates and need to be replaced about every two to three years.

The Occupational Safety and Health Administration doesn't require workplaces to have AEDs, but it does encourage employers to have them on-site.

The American Heart Association launched a public awareness campaign this week to emphasize the value of CPR/AED training for employees, says Kurz.

"It's unfortunate that 1 in 3 businesses thinks to put an AED in place only after an incident occurs," he says. "We would like businesses to think proactively, like they do about their business, about their employees' health."

The survey didn't ask if the workplaces had an AED, or if workers knew that. That makes the findings less robust. We have added that information to the story.