Accessibility links
Breast Cancer Test May Identify Low-Risk Tumors That Don't Require Treatment : Shots - Health News Researchers say the test, which measures gene activity, can help avoid "overtreating" tumors that are not life-threatening. It might allow some patients to avoid radiation and chemotherapy. 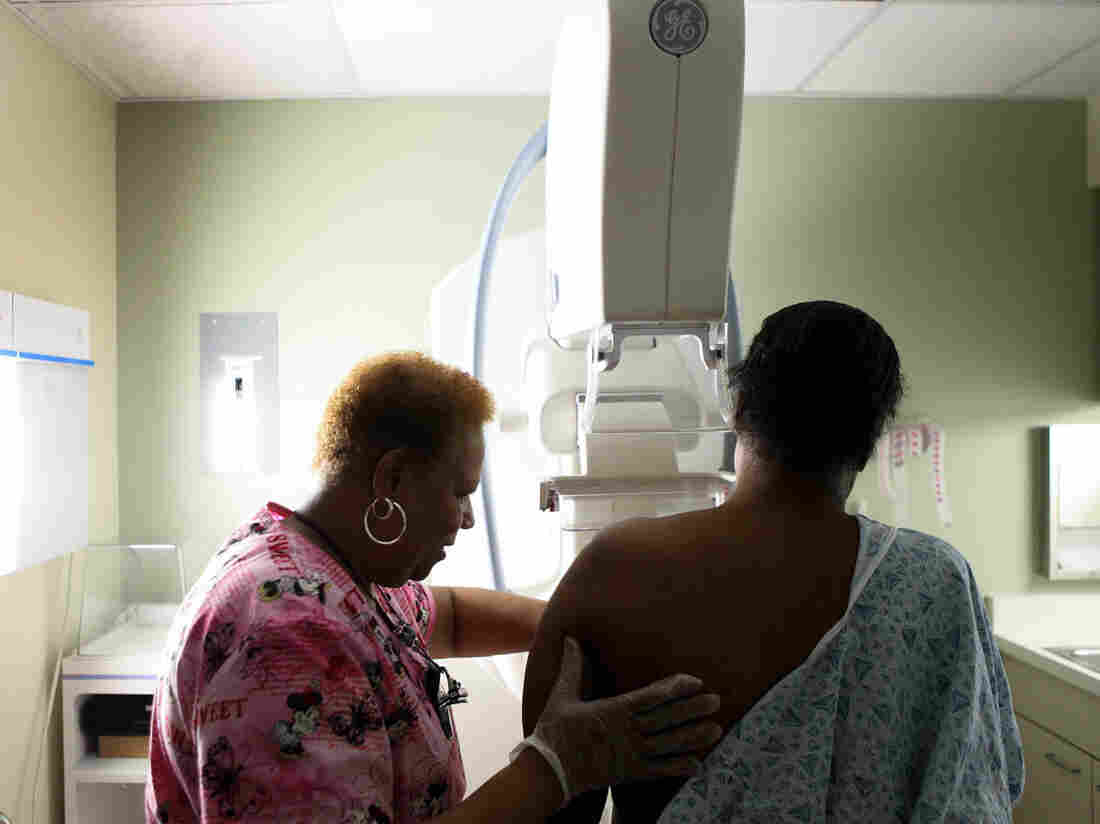 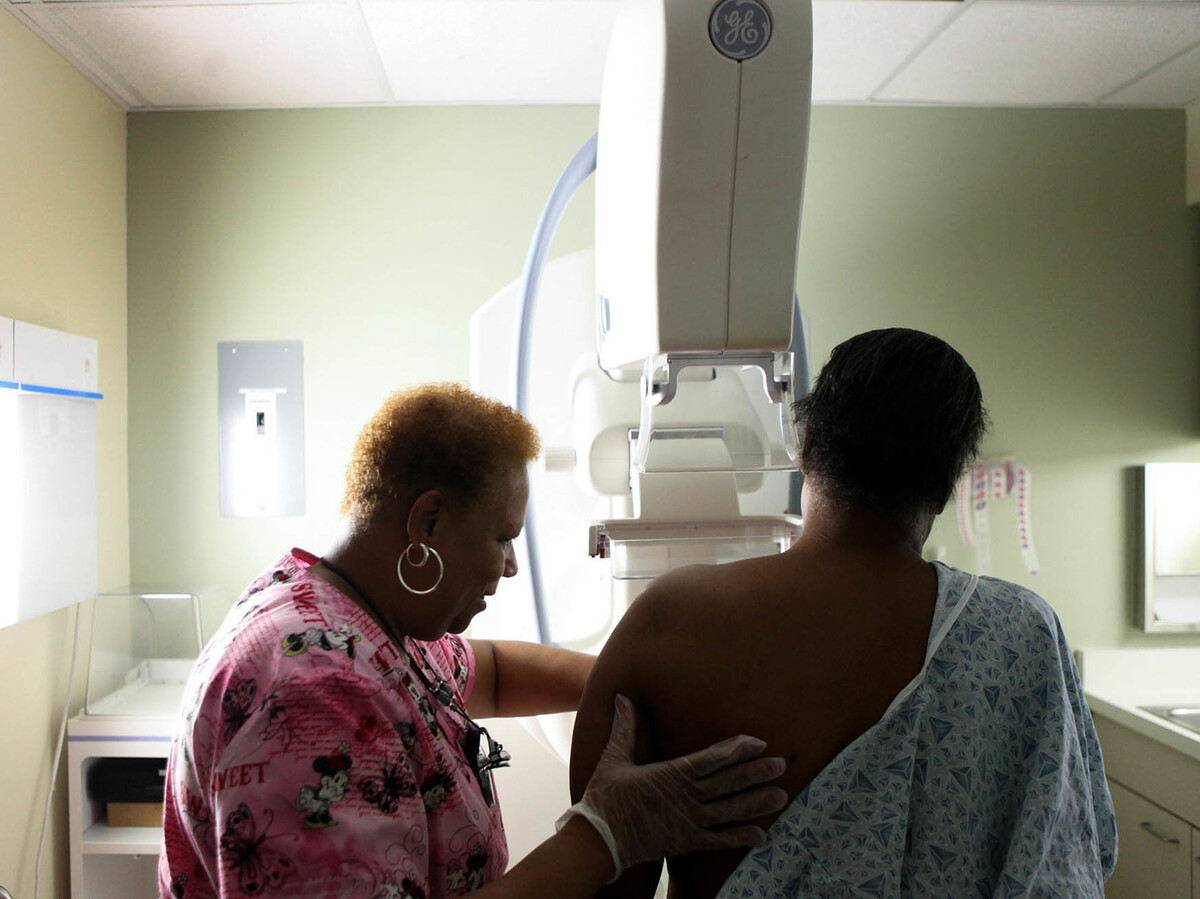 Mammography has helped increase the early detection of breast tumors. Now, researchers say, the goal is to discern which of those tumors need aggressive treatment, including chemotherapy or radiation after surgery.

For years, doctors have focused on detecting breast cancer at the earliest possible moment after a tumor develops so treatment can start right away. But more and more studies are showing many small, early tumors don't present a danger.

So, when is it safe to remove a tumor but skip additional treatments like tamoxifen, chemotherapy and radiation?

A study published Thursday in JAMA Oncology suggests that it may be possible to distinguish fairly precisely between "ultralow-risk" tumors that are unlikely to cause problems and those that are more aggressive and likely to spread — thus allowing some patients to avoid unnecessary treatments.

Researchers in the U.S. and Sweden used a diagnostic test called MammaPrint to measure a tumor's genomic "fingerprint" and compared it with survival time after a tumor was removed. They say they were able to pinpoint patients who had a very low risk of death from breast cancer — even up to 20 years after the first diagnosis.

"You can really say to someone, 'You're not going to die of this disease. And we don't have to be aggressive upfront and treat you with everything, just in case,' " says the lead author of the study, breast cancer specialist and surgeon Dr. Laura Esserman, of the University of California, San Francisco. "There are breast cancers that pose little or no systemic risk."

The results build on findings of a 2016 report using the same test that showed 46 percent of women with certain genetic profiles could actually skip chemotherapy with little consequence to their long-term survival.

Esserman says the new study provides the first evidence that it's possible to run a diagnostic test at the time of a breast cancer diagnosis and identify very low-risk tumors. From this study and others, Esserman says, it appears that about 20 to 25 percent of tumors being diagnosed today "may be ultralow-risk" and not require treatment after surgery.

The UCSF study used breast tissue collected from postmenopausal women in a large Swedish trial, for which there was extensive information about the women's treatment and long-term survival. The study, known as Stockholm-3, was started in 1976 and was among the first to compare the effects of the estrogen-blocker tamoxifen with a placebo. Tamoxifen has since been shown to suppress subsequent tumor formation, and is in common use.

Samples were available from 652 patients. Most (79 percent) had undergone a mastectomy — or lumpectomy plus radiation. About half got no further treatment and half got tamoxifen. Tumors in the study were small — 3 centimeters or less in diameter. And all the women had "clean" lymph nodes, meaning the cancer had not spread.

When Genetic Tests Disagree About Best Option For Cancer Treatment

The tumor test was performed on these samples and 15 percent (98) were classified as ultralow-risk. These women had an "excellent prognosis," the researchers found, whether or not they took tamoxifen or whether they received radiation or not. Their rate of survival, 20 years out, ranged from 97 percent with tamoxifen, Esserman says, to 94 percent without.

Other studies, she says, have shown that women with ultralow-risk tumors do well without radiation.

"We can tell [these] women that they are highly unlikely to die of their cancers and do not need aggressive treatment," Esserman says. "This is an important step forward" for personalizing care for women with breast cancer, because it allows doctors to "tailor treatment for each individual based on the aggressiveness of the tumor they have."

Some other oncologists agree. "We're allowing our science to help us understand that sometimes less treatment is effective," says Dr. Len Lichtenfeld of the American Cancer Society.

"That's an emerging theme in cancer treatment," he says. "We used to think every cancer we found was a bad cancer and had to be treated aggressively. It's taken a long time for us to be able to understand and adopt principles that we can treat less and still be effective — and not harm women [who have] breast cancer."

Even so, should all patients with breast cancer get the tumor test?

"This is not something we are routinely discussing or offering to patients," says Dr. Harold Burstein, a breast cancer specialist at Dana-Farber Cancer Institute in Boston, and a spokesperson for the American Society for Clinical Oncology. Tumors classified as "ultralow," Burstein says, "have never been reported on before."

"This study suggests we may be able to get more information out of MammaPrint, which is exciting," he says, "but it needs to be looked at in more studies."

And until those studies are done, he recommends at least one group of women — those with estrogen-receptor positive breast cancer — "should still have an anti-estrogen medicine like tamoxifen" or a similar drug after their surgery.

MammaPrint is a genomic test that looks at a set of 70 genes in a tumor, showing how the genes are controlling the production of the proteins that drive a tumor's growth. A genomic test of the tumor, which measures how genes are functioning, differs from other genetic tests that determine someone's hereditary risk of cancer.

The tumor test was approved by the Food and Drug Administration in 2007 to predict whether an existing cancer has the ability to spread. It's priced at $4,200 and is covered by some insurance plans in the U.S.

One of the co-authors on the paper — UCSF molecular biologist Laura van 't Veer — developed the MammaPrint test. She's a co-founder and chief research officer of Agendia NV, the company that holds the license to MammaPrint.