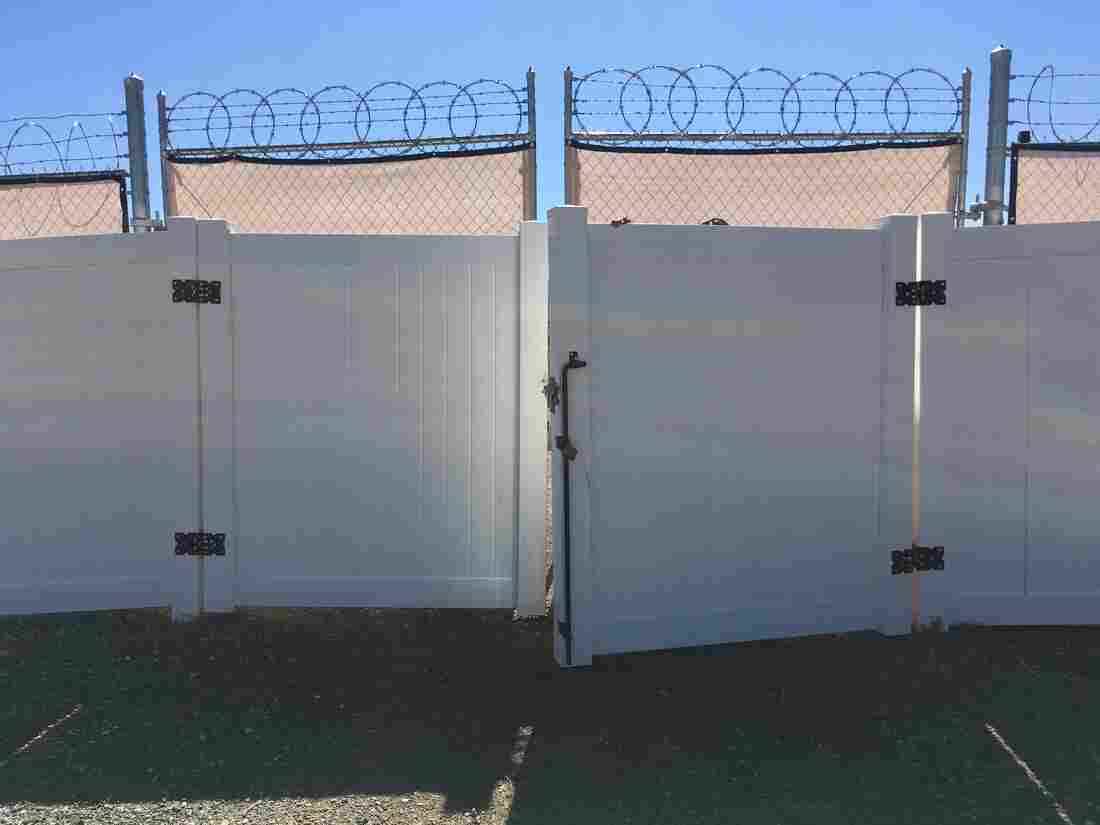 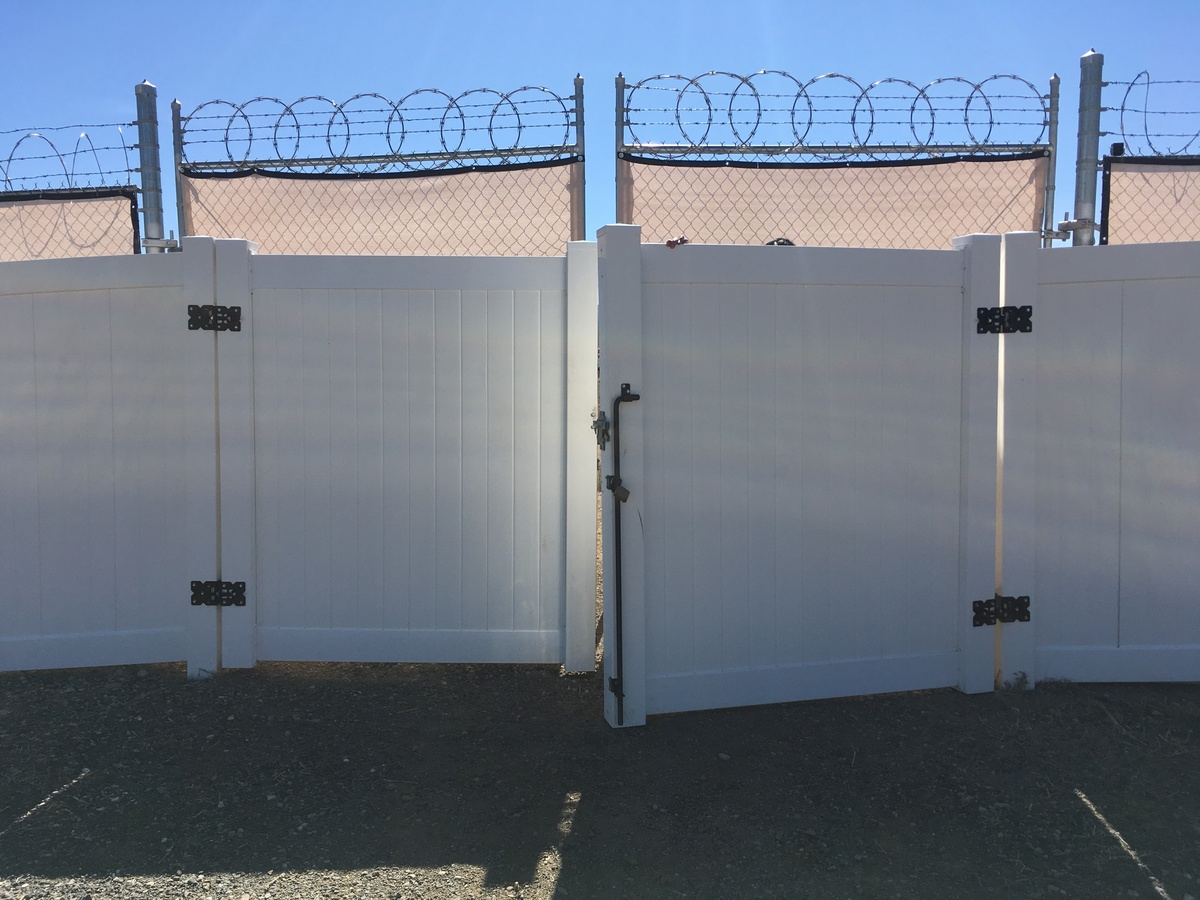 A double set of fences topped with barbed wire circles this outdoor decomposition site outside Grand Junction, Colo. The barrier thwarts prying eyes and protects the curious from an unpleasant surprise.

Before she confronts death straight on, Melissa Connor always puts on a pair of rubber boots. The shelf she takes the shoes from includes a bottle of hand sanitizer, a sign warning people to check their shoes for scorpions and a bundle of wooden stakes, each of which will eventually be marked with the abbreviation "Mr." or "Ms." followed by a number.

Then Connor opens the back door of her lab, located just outside Grand Junction, Colo., and steps onto a gravel path. It's squint-your-eyes bright out here, and everything is dry — the air, the crumbly dirt, the scrubby plants. The only movement comes from the wind, an occasional car on the nearby highway and the prairie dogs that come out of their dens to chatter at intruders.

"I think we have the most scenic of the decomposition facilities, myself," says Connor, a forensic scientist at Colorado Mesa University, as she approaches a fenced plot of land on rolling hills of sagebrush, with snow-topped mountains in the distance. A whiff of something that smells like a cross between stagnant pond and roadkill wafts by.

This site is officially called the Forensic Investigation Research Station, but people sometimes refer to the small plot Connor is walking toward as a "body farm."

She arrives at a 10-foot-tall fence — topped with razor wire, with a second gate in front of that. The double barrier keeps curious people from peering through the cracks in the big fence.

"Yeah. There are oh-so-many reasons for the big fence," says Connor. It's sunk 2 feet into the ground and, among other things, keeps coyotes from walking off with human body parts. "Wouldn't be good P.R.," Connor explains. 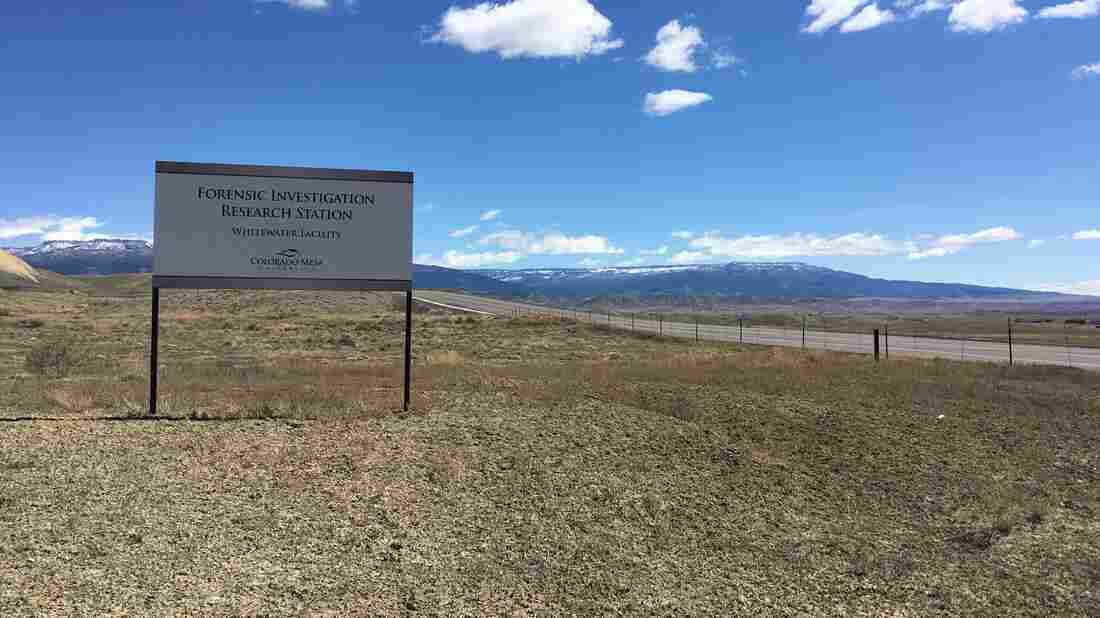 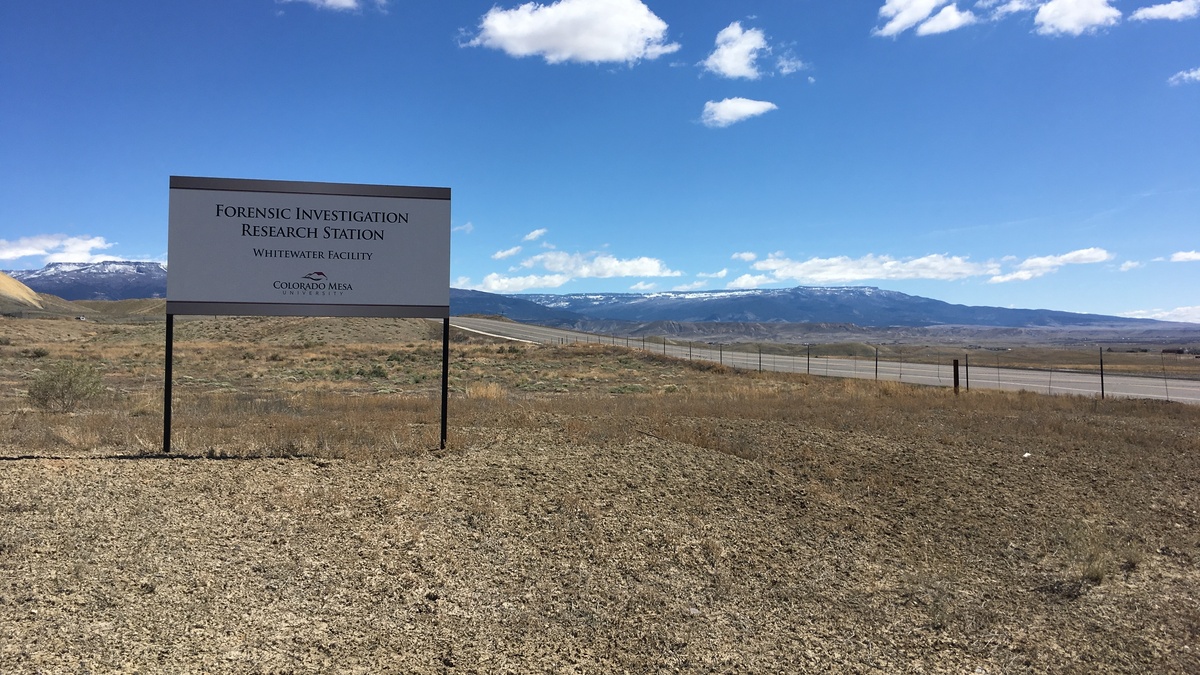 (Editor's note: Those readers who are squeamish about descriptions of decaying bodies may want to skip the next nine paragraphs.)

The small plot, about an acre in size, contains rows of human remains. There are 36 bodies in all — donated either by the people themselves, in instructions before death, or by their families after the fact. The bodies are naked, and lying face-up as if cloud-gazing.

There are seven "body farm" facilities like these across the U.S. This is the only decomposition site in the semi-arid west.

"This is Mr. 1612," says Connor as she stands over a body teeming with maggots and flies. "He came in late in 2016. The insects have found the incisions from the autopsy and laid their eggs there, and they're doing their thing." 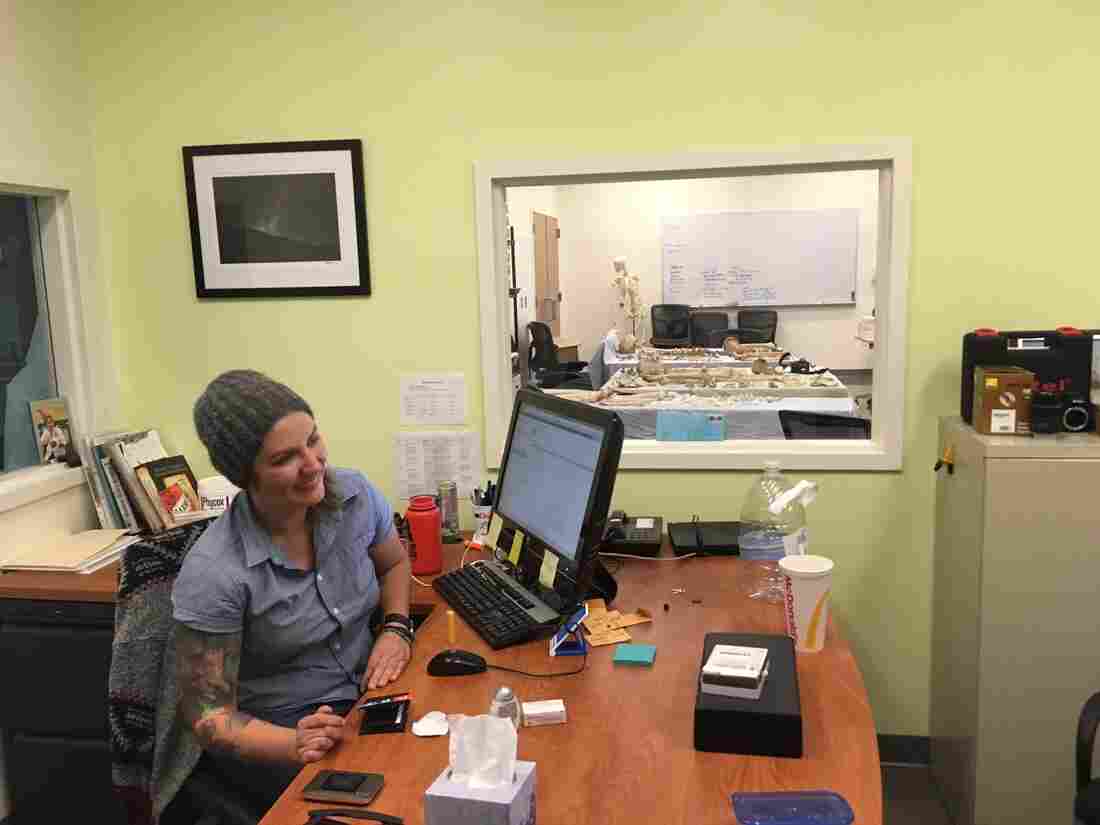 Chrissy Baigent corresponds with families who have donated their loved one's remains to the body farm. She also cleans each skeleton once the other tissue has decomposed, and lays out the bones for students to study. Rae Ellen Bichell/NPR hide caption 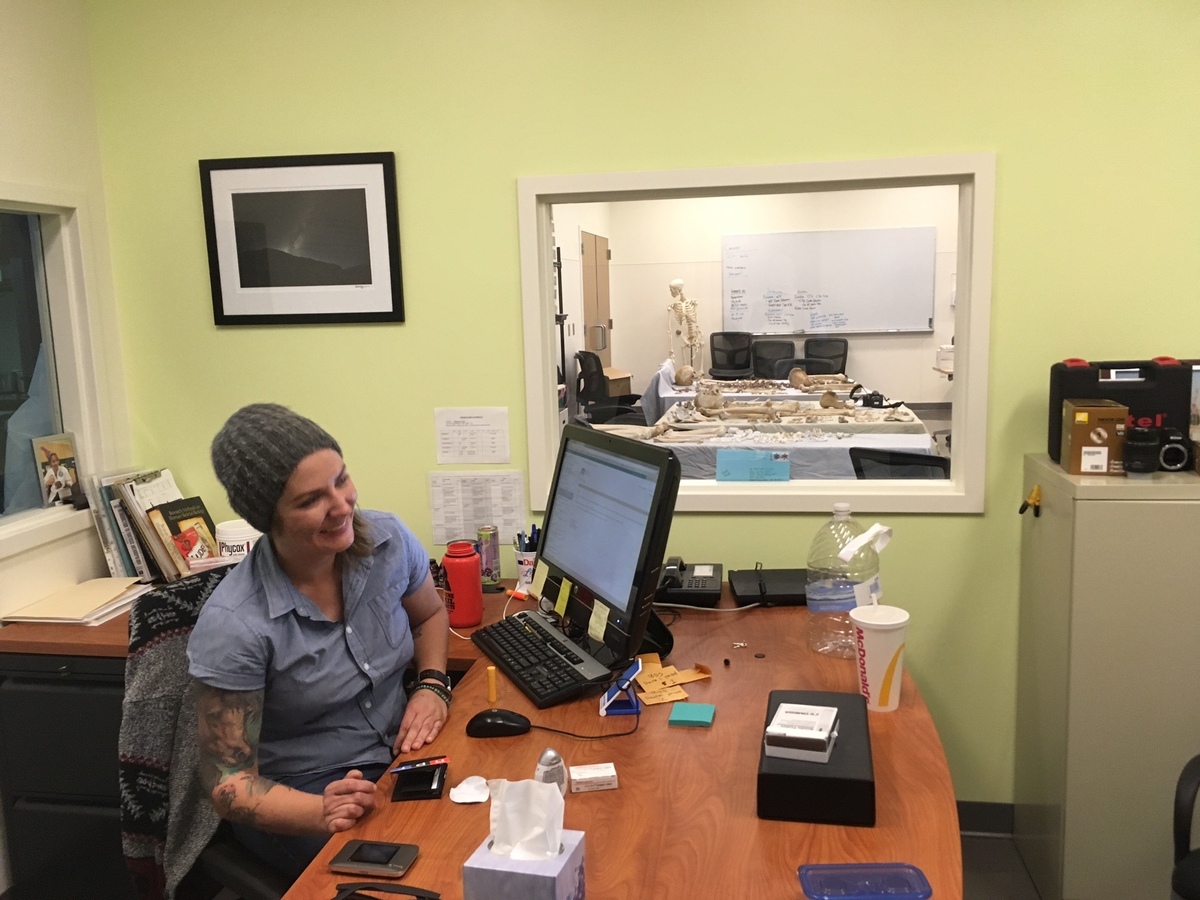 Chrissy Baigent corresponds with families who have donated their loved one's remains to the body farm. She also cleans each skeleton once the other tissue has decomposed, and lays out the bones for students to study.

"Aggressive wriggling," adds Christiane "Chrissie" Baigent, a research assistant at the station, who checks on the bodies daily. She's the one who will eventually collect each set of remains once they've finished decomposing, bring them to a gentle boil in the lab to remove any remaining tissue, and mark each bone with a number before adding the skeleton to a slowly growing teaching collection.

"There's no one, absolutely no one, who looks good in decomp," says Connor, who trained as an archaeologist before excavating mass graves in Croatia, Rwanda, Cyprus and Iraq — primarily with a group called Physicians for Human Rights.

Connor and Baigent are so accustomed to the sight and smell of rotting human bodies that their stomachs will growl at lunchtime, even if at that very moment they're crouched over a bloated corpse.

Usually, bodies go from greenish to grayish to brown and black as generations of insects eat everything except the skeleton. But that's not what will happen to Mr. 1612. Out here, the usual rules of decay don't apply.

Instead of turning gray, for example, his body might turn as bright orange as a traffic cone. His skin will dry out and harden so much that bugs won't be able to chew through it.

Out here in the desert, Mr. 1612 will likely become a mummy. When he does, it'll look like he's decaying in slow motion.

About 700 miles south, in the Sonoran Desert of Arizona, the lessons from the Colorado body farm are all too relevant.

"There are literally thousands of migrants dying every year," says Bruce Anderson, a forensic anthropologist with the Office of the Medical Examiner in Pima County, Ariz. "We still have bones and bodies coming in, if not on a daily basis, on a weekly basis."

Over the last 20 years, he says his office has worked on identifying the remains of almost 3,000 people known or thought to have crossed the border without documentation. Some of them were alive 10 minutes before border patrol found them, he says. Others had been dead for decades. Many of these people likely died trying to cross the border into the U.S.

In recent years, more bodies have been showing up. That's not because more people are crossing the border in that area; the number of people crossing the border from Mexico has actually gone down, according to the U.S. Border Patrol. Instead, Anderson says, it's because of the ramp up in border patrol agents working in the region. More boots on the ground means more eyes looking for migrants, whether alive or dead.

An essential part of Anderson's work for the county medical examiner is figuring out when someone died, because often the only clue that relatives can offer is when their loved one disappeared.

"If a skeleton is found in the Sonoran Desert and we think the person died between one and two years ago — versus five and 20 years ago — that can save a lot of time in going through missing persons reports from those two time periods," says Anderson.

It's particularly important for the cases Anderson works on, because, while there's a single database for missing American citizens, there's a whole patchwork of missing-person lists for foreign nationals — lists maintained by various consulates and independent organizations. Some of the records aren't even digitized.

"You literally have to have a person sit down with paper records or an Excel spreadsheet and look through descriptions of tattoos or crooked teeth or pink tennis shoes or yellow T-shirts," Anderson says.

Narrowing down when a person died can mean the difference between identifying a body and having to bury it anonymously.

Back at the Colorado body farm, Connor stands over one body in particular.

"Mr. 1401. He's the individual we deposited here in January 2014," says Connor. There are no maggots or flies on this body. What's left of his tissue is a brittle shell. If a mouse walked over it, the remains would fall apart.

"If you went and looked at a rock and you saw the black lichen on a rock, that's sort of what the body looks like," says Eriek Hansen, a biologist with Colorado Mesa University who also does research at the body farm.

"He has what I think actually is a black mold on some of him," says Connor. And, she says, "There are portions of the tissue that are much more parchment- or vellum-colored." 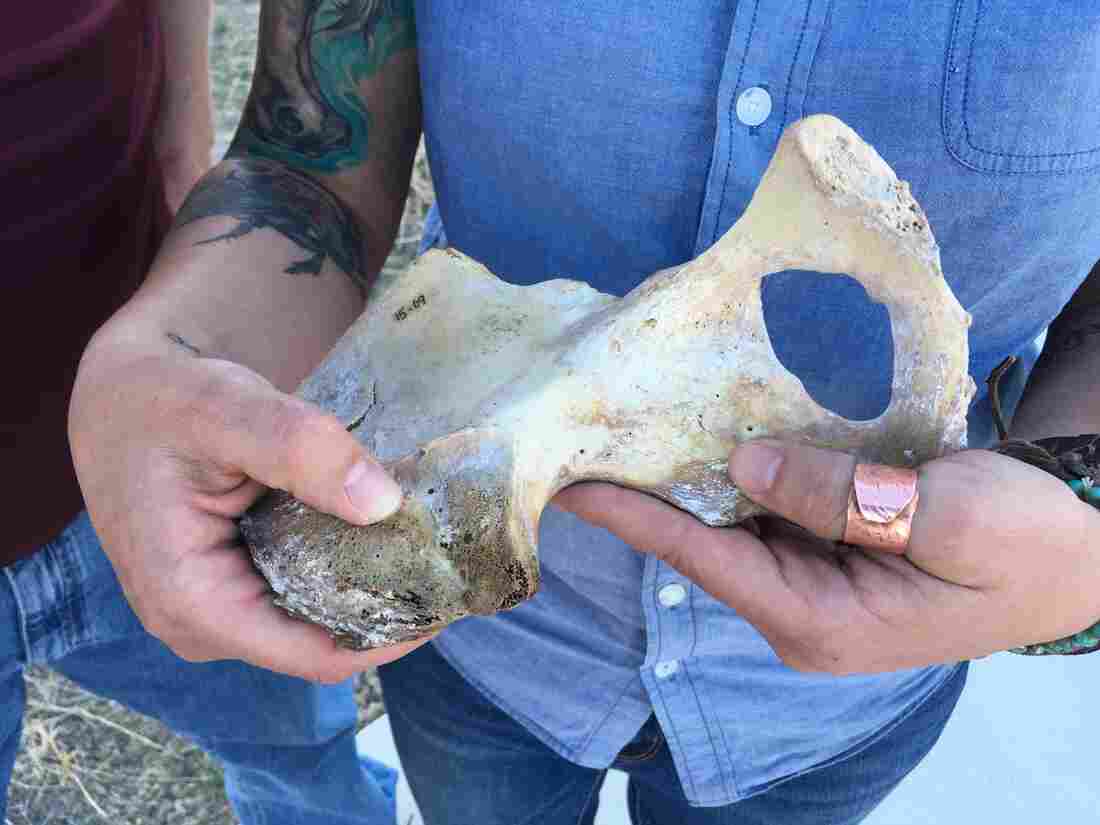 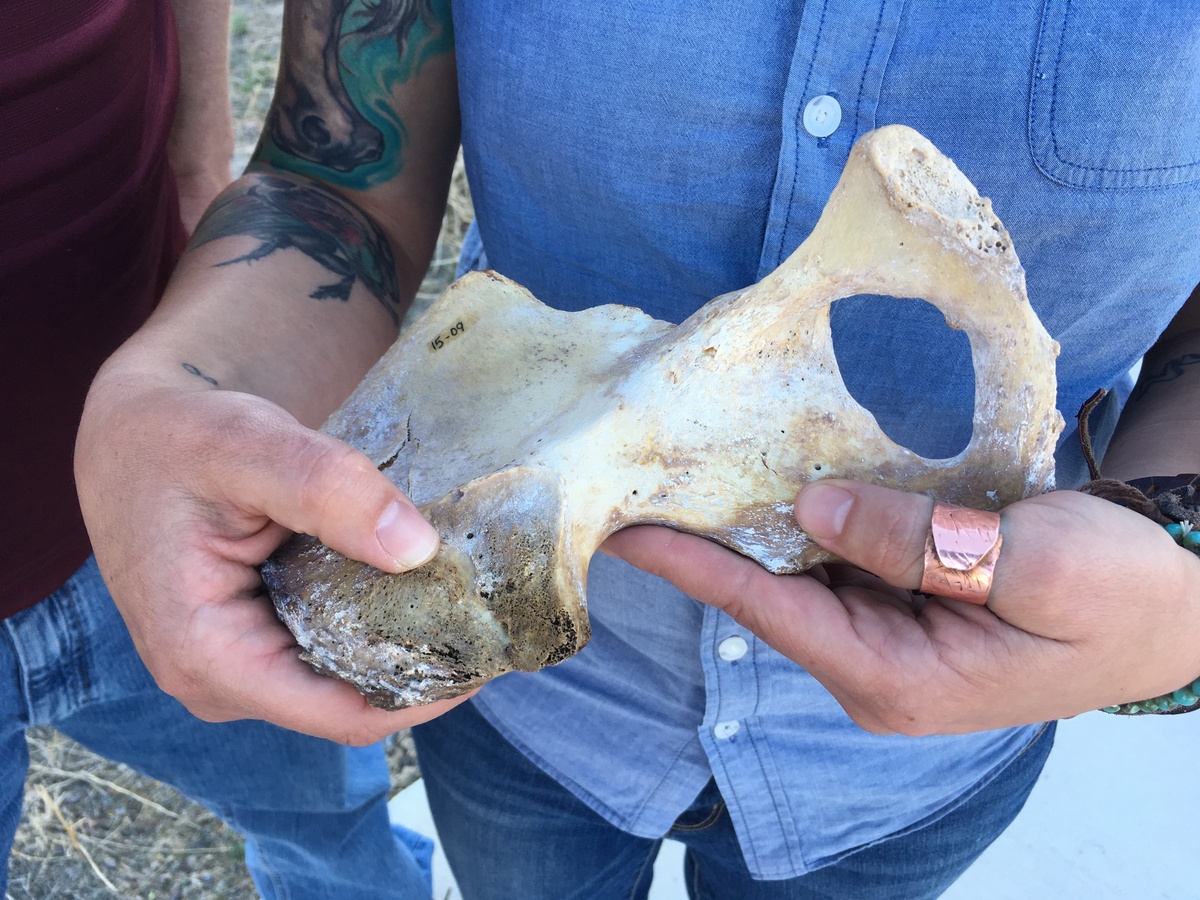 Chrissy Baigent holds a human pelvic bone from the field.

Existing methods for determining when someone died would not work on this body. Because he turned into a mummy, Mr. 1401 looks as if his body has been out in the desert for a few months, even though it's been more than three years since he died.

Baigent, Connor and Hansen are working on new ways to measure changes in moisture, color, bloating and texture of tissue that, with the help of weather data, would let them accurately calculate how many days a body like this has been outside.

"We want to narrow that estimate down as much as we can, to help law enforcement figure out who those people might be," says Connor, who says local law enforcement call her office between one and four times a year for help identifying a body.

Hansen is using electricity to measure how much moisture a body has lost over time. Baigent and Connor have come up with a detailed scoring system to describe exactly how a body's skin quality changes as time goes on, using words like "parchment," "vellum" and "burnt umber." There's even something they call "pebbled mosaic," which happens when skin sloughs off, leaving tissue islands, which Baigent says is a hint that a body has been outside longer than initial estimates would suggest.

It takes a trained eye — and a strong gut — to notice these subtle changes.

"When you're looking at the whole body, it doesn't look like significant changes are occurring," says Baigent, but they are. You just have to look closely.

If the research team can pin down those details, it could help their colleagues to the south bring closure to the families of those who died. The remains of countless people still lie unidentified.