Accessibility links
'Game Of Thrones' Is A Hit Among Disability Activists, Too : Shots - Health News Several main characters in the HBO series happen to have disabilities. "I had never seen my own experience in life reflected so accurately, so vividly, so viscerally," says one disability activist. 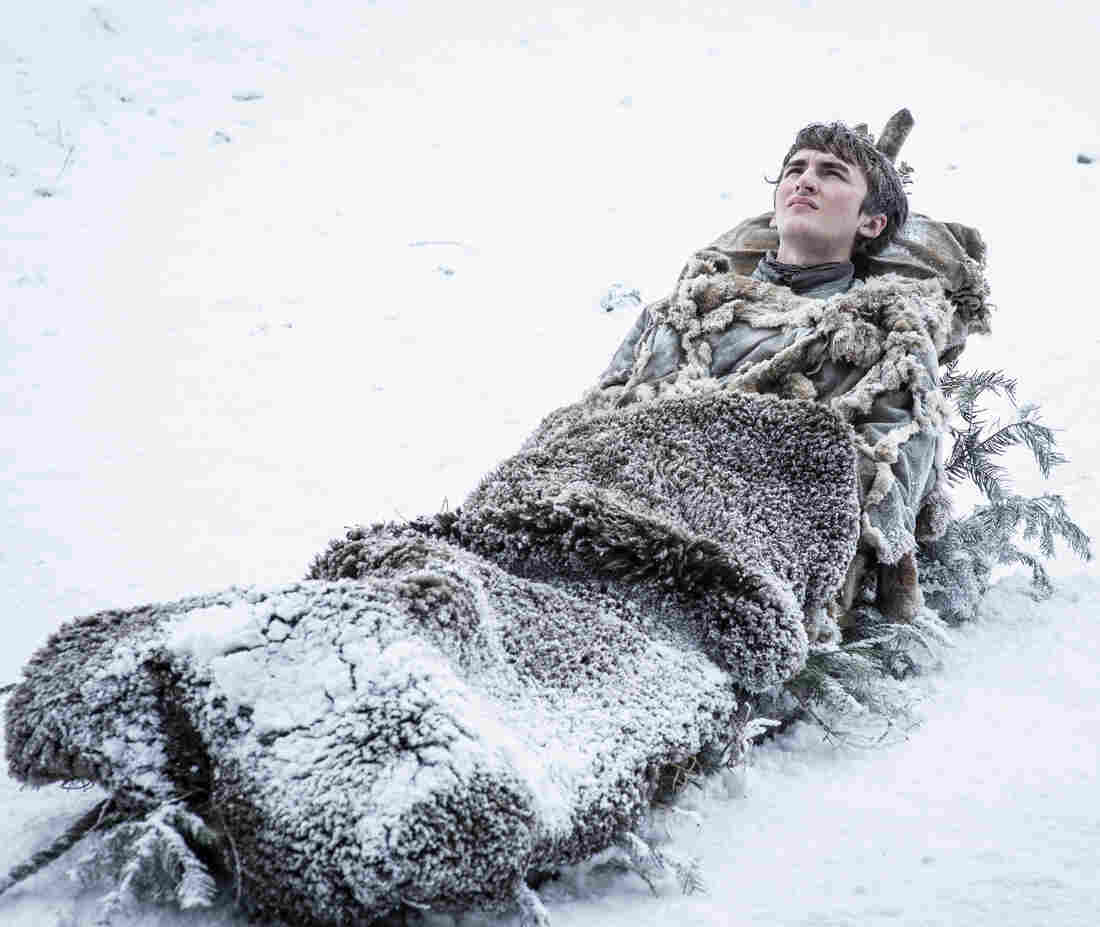 Isaac Hempstead Wright plays Bran Stark in the HBO adaptation of George R. R. Martin's Game of Thrones books. Some disability activists are concerned that Bran will be magically cured of his paralysis in the show's new season. Helen Sloan/HBO hide caption 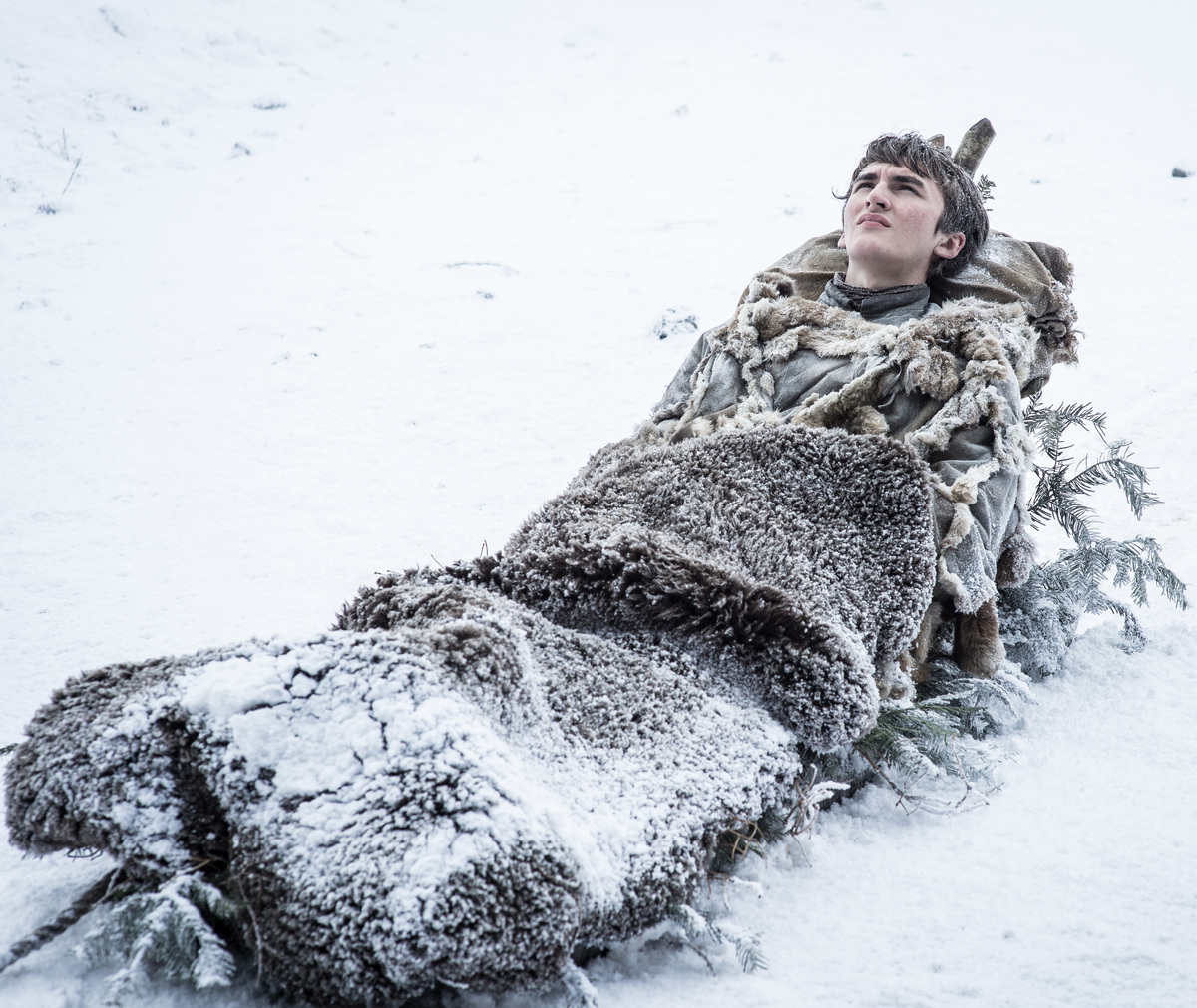 Isaac Hempstead Wright plays Bran Stark in the HBO adaptation of George R. R. Martin's Game of Thrones books. Some disability activists are concerned that Bran will be magically cured of his paralysis in the show's new season.

One of the main characters on HBO's hit series, Game of Thrones, is paralyzed. Another has lost his right hand. We've met an important character with a severe skin disorder and another with an intellectual disability.

And Peter Dinklage, the actor who comes first in the credits, is a little person. So is Rebecca Cokley, executive director of the National Council on Disability. She's a fan of the show — in part because it's given average-sized viewers a new set of references for people who look like her.

Cokley loved the original Game of Thrones books by author George R. R. Martin. But she did worry that it would be harder to witness certain scenes on the screen than on the page. In one episode, for example, an evil king humiliates Tyrion by staging a vulgar play with a cast made up exclusively of little people.

"When I read that in the book, I had never seen my own experience in life reflected so accurately, so vividly, so viscerally," Cokley remembers.

Right after the episode including that scene aired, some of Cokely's friends who don't have disabilities called her — to make sure she was OK. 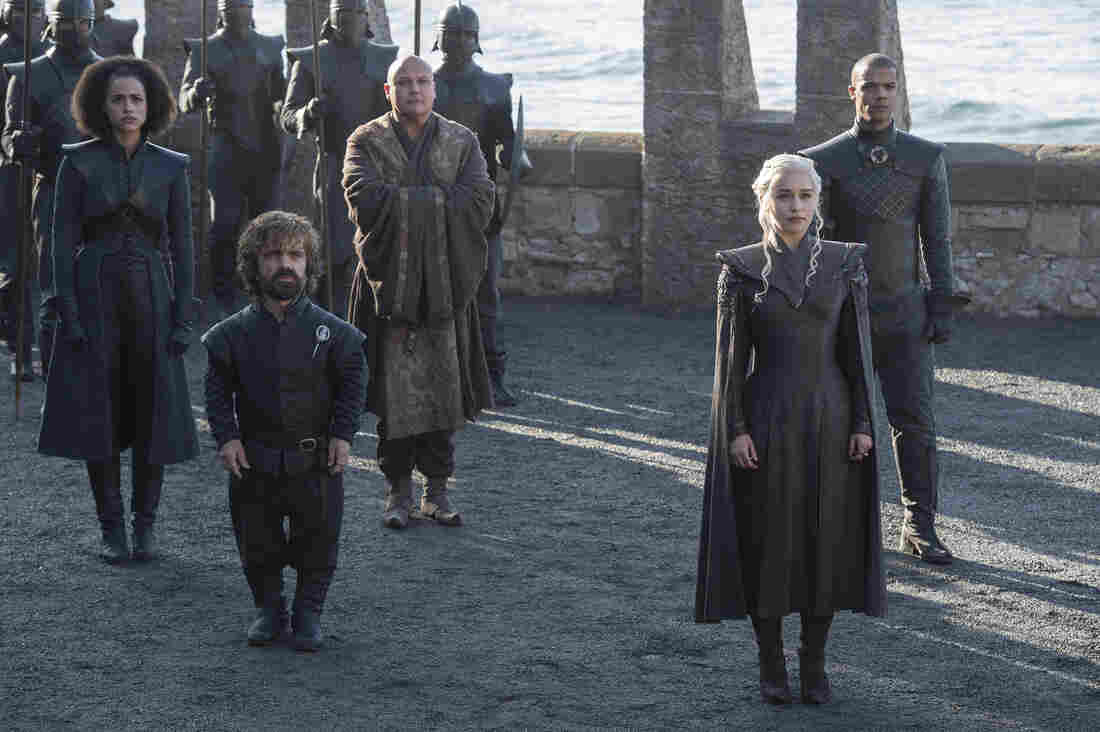 In a 2012 interview with NPR, Peter Dinklage (second actor from left) said he appreciated how well-rounded his Game of Thrones character is. The show "does address the size issue, but it doesn't knock you over the head with it," he said. Macall B. Polay/HBO hide caption

"They were like: 'Wow, is that really what it's like?'And I was like, 'Yeah,' " she recalls. "There are days when that's what it's like. People see me and get down on their knees and mock how I walk. Or they follow me around the store and take pictures of me."

David Perry is another writer and activist for disability rights, and a Game of Thrones fan; he also happens to hold a doctorate in medieval history. Perry calls the series "medieval-ish." In a show set before modern medicine, he says, it makes sense to see people with disabilities. "Every human society is, of course, packed with disabled people."

While plenty of Game of Thrones characters have disabilities, Perry says the show still falls into some traps. Take the young princess scarred by a fictional severe skin disease — "greyscale." Perry says the character's disability primarily serves to pump up the pathos.

"It isn't really about her," he points out. "Right? It's all — this poor, physically disfigured girl who's so good and pure and smart. Oh no, she's going to be killed; now we have to be really upset. That is the kind of writing I kind of hate."

You don't want to learn to fly. You want a ramp built into your castle.

Perry also takes issue with how quickly a fictional swordsman — Jaime Lannister — who loses one hand learns to fight with the other. Then there's Bran Stark. Early in the series the character becomes paralyzed, and spends much of the first season being carried by Hodor, the character with intellectual disabilities. Both have mystical powers — an old cliché in disability representation (think of The Green Mile or The Boy Who Could Fly.) Some activists are concerned that this season, Bran will be magically cured.

"Will Bran learn to fly? Will he learn to shape-shift?" Perry asks. "Is he going to be able to change his body so he's not paralyzed anymore?"

Granted, Game of Thrones is a fantasy, Perry says. But that sort of transformation isn't what most wheelchair users are looking for.

"You don't want to learn to fly," he says dryly. "You want a ramp built into your castle."

Still, Perry admires how the series explores such a wide range of characters with different sorts of bodies and minds. Cokley admires that too; she's especially effusive about the books' author, George R. R. Martin.

"He obviously hangs out with a rabble-rousing group of disabled people," she says. "I know it. I sense it."

This fantasy universe is far more realistic than lots of other television shows, Cokley says, when it comes to representing people with disabilities on screen.