Accessibility links
Paid Peer Support Is Helping To Fill Treatment Gaps For Some With Serious Mental Illness : Shots - Health News Giving people who have serious mental illness peer support has proved so helpful that some states are starting to pay these peer specialists to bridge the gap when there aren't enough professionals. 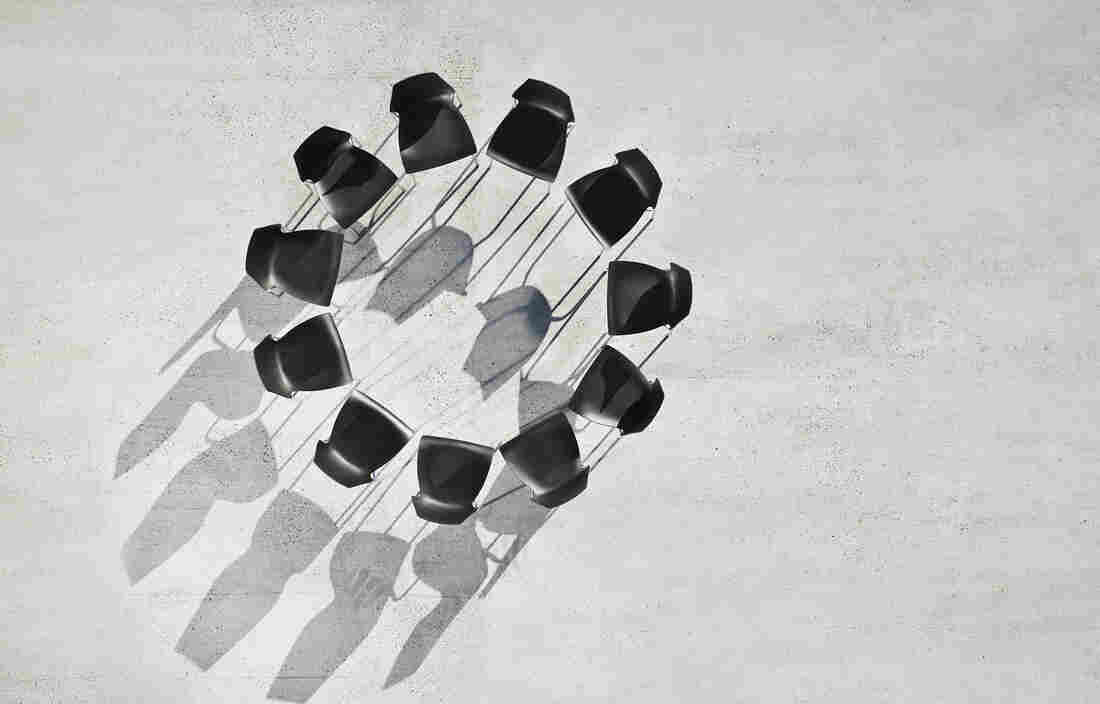 There's a severe shortage of professional mental health care providers in Texas. Peer specialists — certified and paid — have begun to bridge the gap. Texas is one of more than 35 states that finance peer services through Medicaid. Martin Barraud/Getty Images hide caption 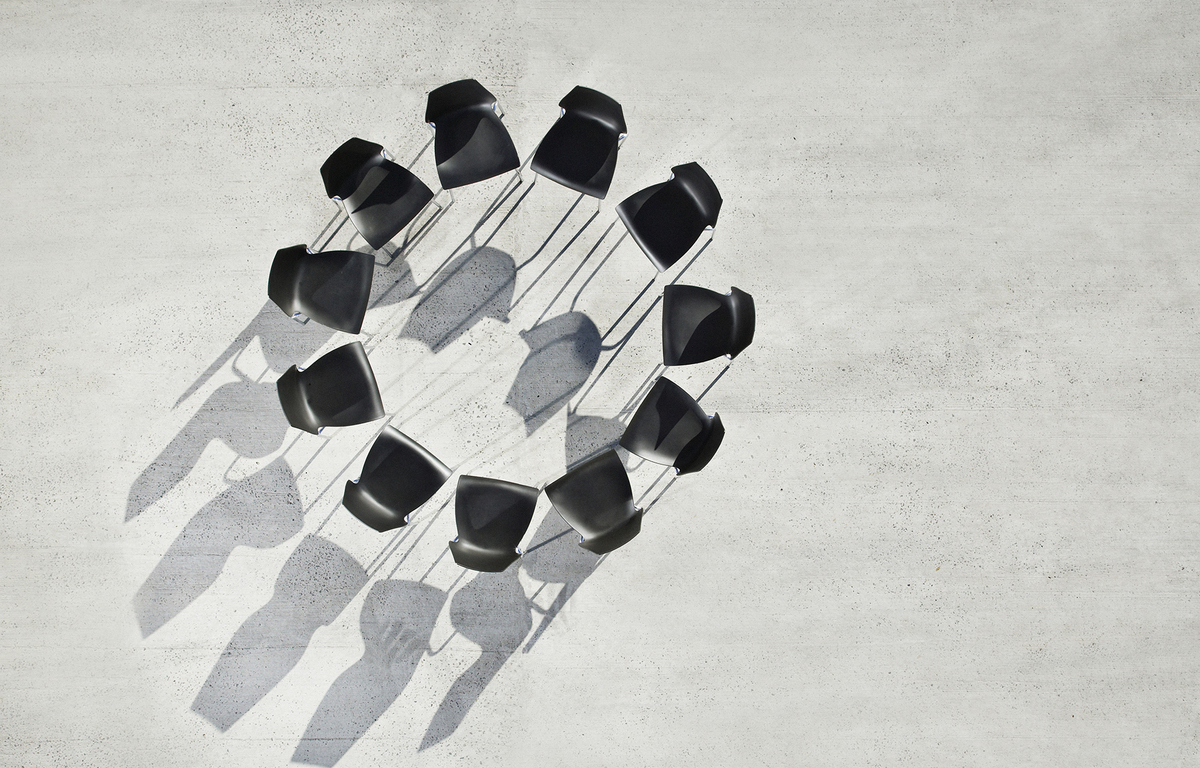 There's a severe shortage of professional mental health care providers in Texas. Peer specialists — certified and paid — have begun to bridge the gap. Texas is one of more than 35 states that finance peer services through Medicaid.

Recovery coaches and peer mentors – known in Alcoholics Anonymous as "sponsors" — have for decades helped people who are addicted to alcohol or drugs. Now, peer support for people who have serious mental illness is becoming more common, too. Particularly in places like Texas, where mental health professionals are in short supply, paid peer counselors are filling a gap.

David Woodside, who has been living with bipolar and schizoaffective disorder his whole life, is getting help this way. Not too long ago, he wound up in Dallas County jail for the first time, at the age of 57. Woodside had become upset and kicked his brother.

"Nothing good happens in jail," he says. "They don't give you your medication."

After his brothers, including the one he kicked, bailed him out, Woodside enrolled in an anger management class in Dallas at Metrocare, a nonprofit serving people with mental illness in North Texas.

At Metrocare, Woodside also started visiting David Yarborough's office several times a week. Inside, there's an American flag on the wall, a popcorn machine in the corner, and tissues on the wooden desk.

The two Davids have a lot in common.

Both are fathers and have worked as electricians, and both are taking the same antipsychotic medicine. That's because Yarborough is also coping with mental illness. He's not a volunteer — he's a full-time, paid, peer specialist. Woodside says, for him, meeting with Yarborough has been better than seeing a psychiatrist. 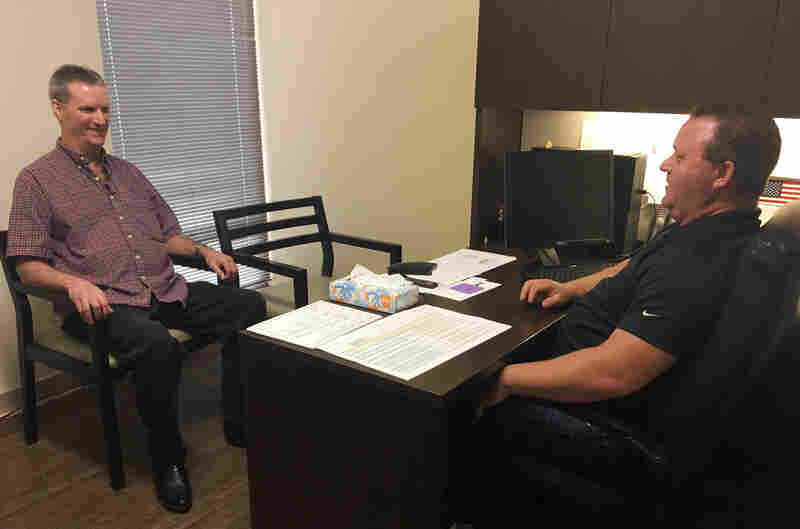 David Woodside visits David Yarborough's office several times a week to get helpful coaching on how to manage the symptoms of his bipolar and schizoaffective disorder. "Dave's been through a lot of the things I've been through — and vice versa," Woodside says. Lauren Silverman/KERA hide caption 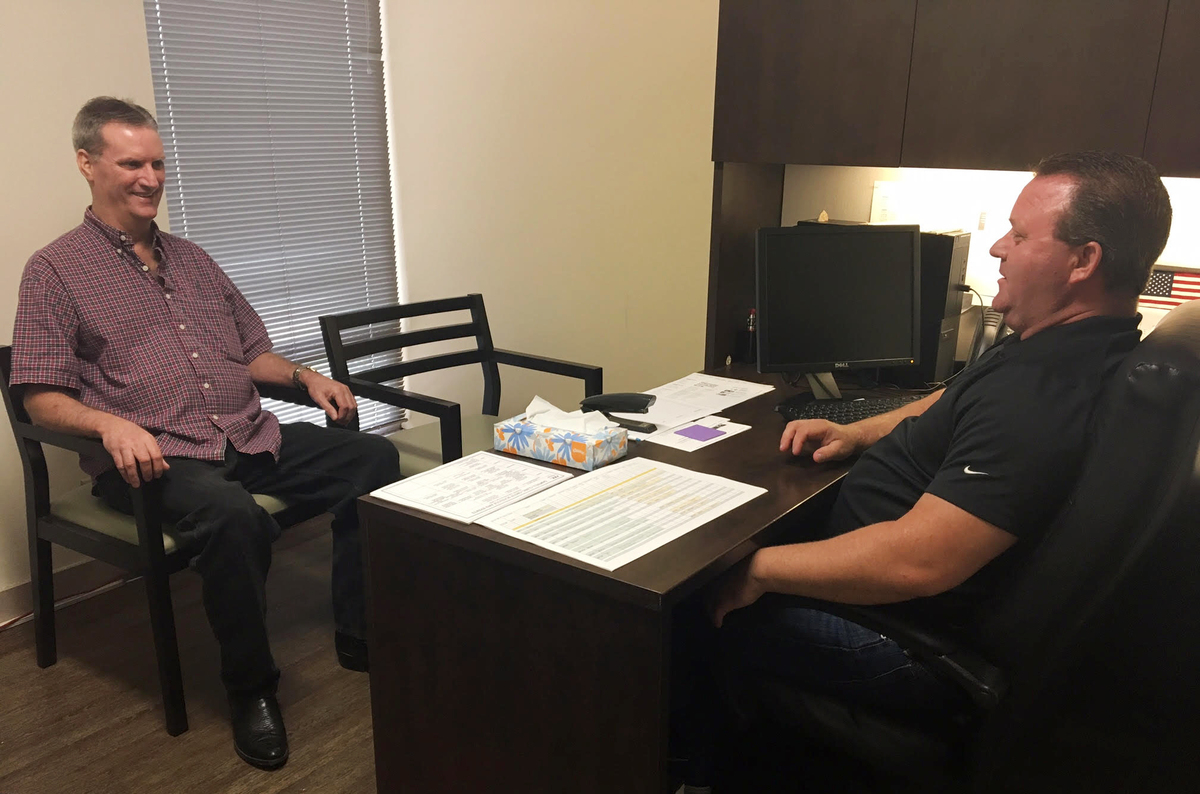 David Woodside visits David Yarborough's office several times a week to get helpful coaching on how to manage the symptoms of his bipolar and schizoaffective disorder. "Dave's been through a lot of the things I've been through — and vice versa," Woodside says.

"[Psychiatrists] see you for about six or seven minutes," Yarborough says. "They don't know what's going on with you. And Dave's been through a lot of the things I've been through — and vice versa."

Metrocare employs five trained peer specialists, including two who are part of the statewide Military Veteran Peer Network. In Texas, more than 900 people have gone through the statewide certification training process provided by the nonprofit organization Via Hope. The peer specialist training takes 43 hours over five days, and covers topics such as ethics, effective listening, the role of peer support in recovery and how to use your own recovery story as a recovery tool for others. The certification is valid for two years, and a person needs to earn continuing education credits during that time period to apply to renew their certification.

Dennis Bach, Executive Director of Via Hope, says most of the certified peer specialists are employed by community mental health clinics and state hospitals.

Jim Zahniser, a licensed clinical psychologist, researcher and consultant with The Meadows Mental Health Policy Institute, says the idea of peer services has been around for decades, but it's only recently that studies have shown how powerfully effective the approach can be.

How Gaps In Mental Health Care Play Out In Emergency Rooms

"One of the problems with mental health is we've learned how to keep people 'stable' on their medications and get them out of the hospital. But recovery is about having a life in the community," Zahniser says. "And peer services are often focused on those things: How do you get your life back?"

Studies show peer support specialists can do as well as traditional case managers — if not better — in keeping patients with severe mental illnesses out of psychiatric hospitals.

And, Zahniser says, when it comes to convincing people who are suspicious of doctors to seek help, peers are often the ones who can connect fastest, and convince those who need help to get treatment and services.

For many years, peer specialists were volunteers. But as the Centers for Medicare and Medicaid Services recognized their value, and more training programs were established and standarized, it became easier for hospitals and clinics to employ these specialists full-time.

Texas is one of more than 35 states that finance peer services through Medicaid. There's a severe shortage of mental health care providers in the state, so certified peer specialists are bridging the gap.

Joanne Spetz, a researcher of workforce issues with the Institute for Health Policy Studies at the University of California San Francisco, says peers play a critical role in mental health teams — alongside doctors and social workers.

"When [programs] first brought in peers," Spetz says, "[they] had to spend a lot of time with the social workers, explaining to them that we were not going to take their work and hand it off to a cheaper person — that what the peer did was complimentary, but it was different."

Yarborough was offered a job as a peer specialist precisely because of his success in coping with his own mental illness and overcoming his past use of methamphetamines. When he works with clients, he can talk openly about how, decade ago, he, too, fell into a very dark place.

"I went from the outdoorsman — fishing, yard work, just really enjoying all that stuff — to ... the guy who wants to lie in bed all day and stare out the window," Yarborough remembers.

He even started having suicidal thoughts.

"I gave my wife the key to my gun safe," Yarborough says, "because I did not feel comfortable having access to my pistols."

Eventually, Yarborough was diagnosed with bipolar II disorder. His condition has been stable for seven years and he's been clean of meth and alcohol use for 10.

When he trained to become a peer specialist, Yarborough says, he learned how to work with others while keeping a close watch on his own mental health. Today, he helps dozens of people every week manage their symptoms.

His mantra? "It's not how you fall, it's how you get back up," he says. "And I've really stuck to that concept."

There can be a lot of stumbling with a mental illness, Yarborough notes, and having a shoulder to lean on can make the journey much smoother.

The idea of relying on peer providers in this way isn't unique to the U.S.

"There are many parts of the world where peer specialists are being deployed in the health care system to provide mental health care interventions," says Dr. Vikram Patel, a psychiatrist and professor of global health and social medicine at Harvard Medical School.

Patel says nearly 450 million people are affected by mental illness worldwide. In developing countries, the vast majority go untreated, he says, because psychiatrists are in such short supply. Patel has looked at the potential of peer support to help meet mental health needs in India and Pakistan.

"We've completed trials showing people affected by schizophrenia can be very effective in supporting other people in their own community by befriending them and giving them social support," he says.

Patel is now completing a study that trains community members in how to best help some of their neighbors — mothers suffering from depression.

He hopes Texas and other states in the U.S. continue to experiment with using peer providers, especially to serve people who are finding it difficult to get access to mental health professionals.

"Many groups experience such difficulties — for example, minorities and those who are homeless," Patel says. "This model is one that should be adopted and integrated into the mental health care system."

This story is part of NPR's reporting partnership with KERA and Kaiser Health News.