Accessibility links
'Dirt Is Good': New Book Explores Why Kids Should Be Exposed To Germs : Shots - Health News Should I use antibacterial soaps? How often should I bathe my child? Those are just some of the questions Jack Gilbert, a microbiome scientist, answers in his new book. 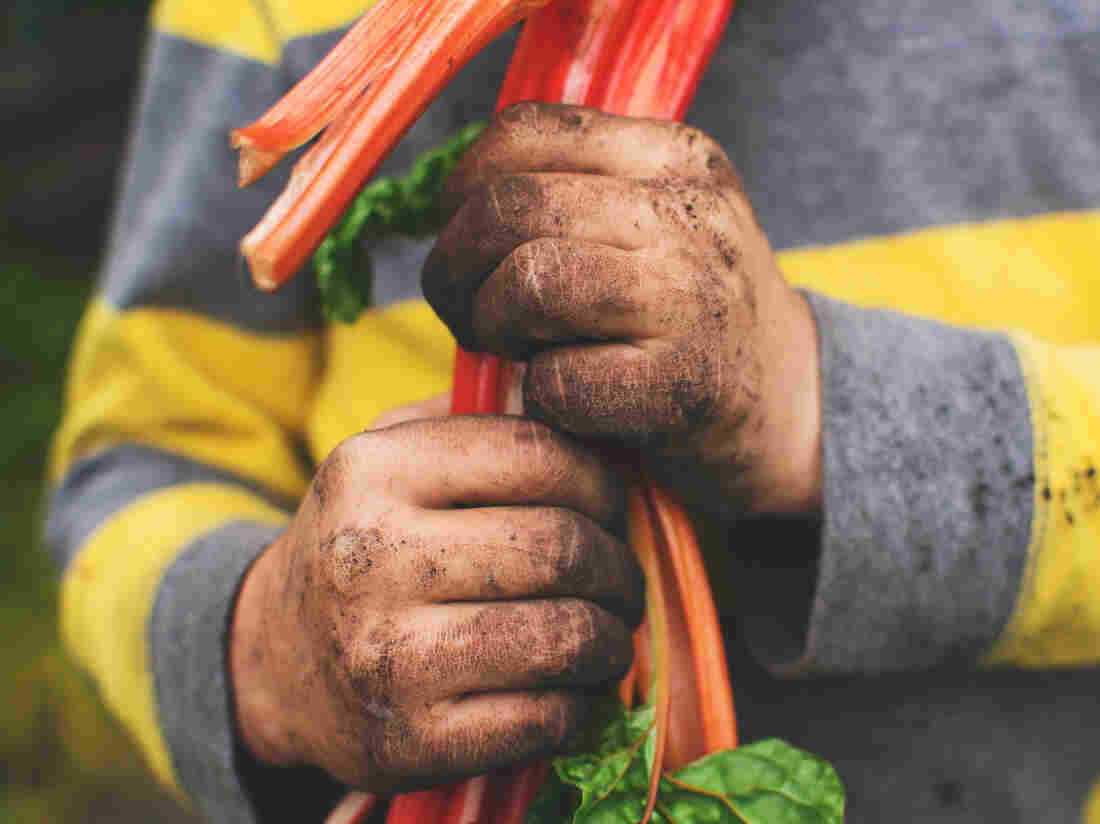 Jack Gilbert, co-author of the book "Dirt Is Good," says kids should be encouraged to get dirty, play with animals and eat colorful vegetables. Elizabethsalleebauer/Getty Images/RooM RF hide caption 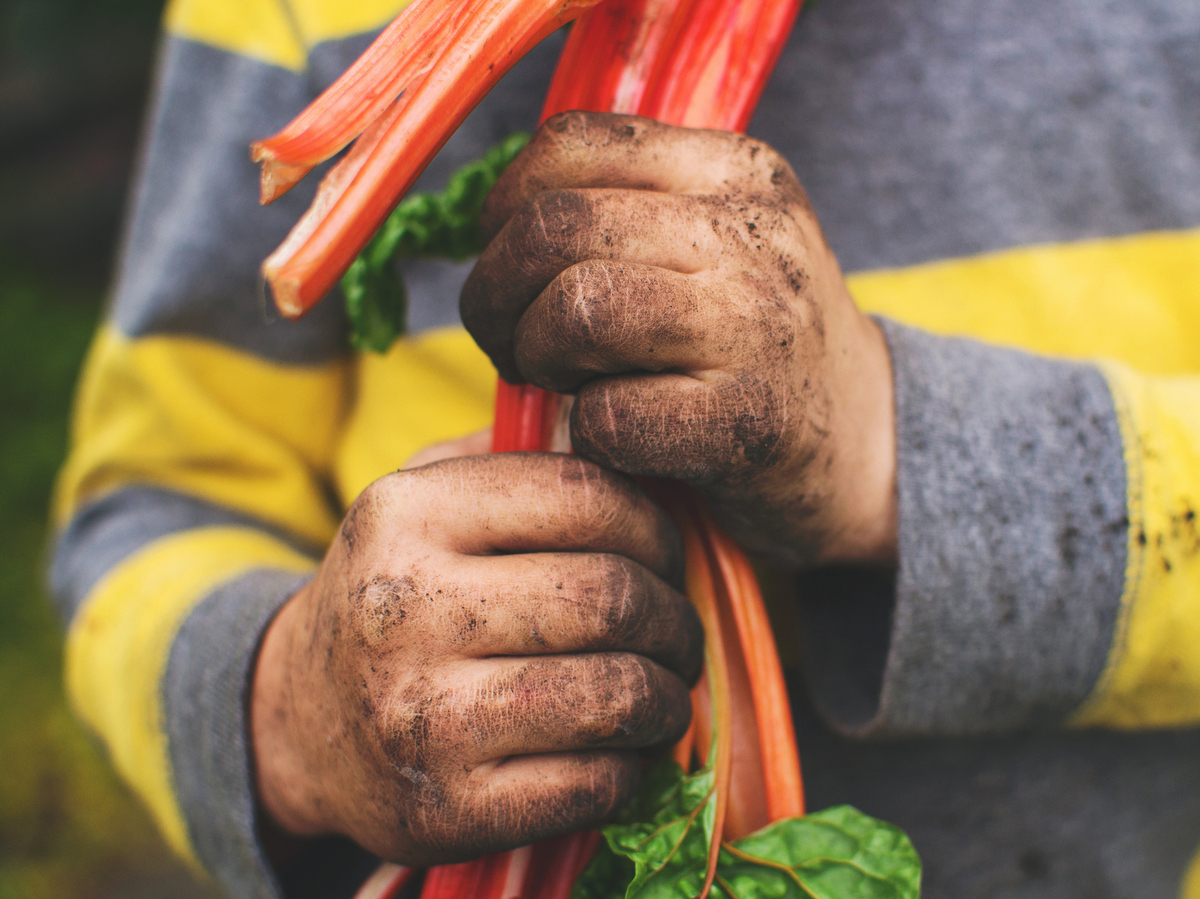 Jack Gilbert, co-author of the book "Dirt Is Good," says kids should be encouraged to get dirty, play with animals and eat colorful vegetables.

As a new parent, Jack Gilbert got a lot of different advice on how to properly look after his child: when to give him antibiotics or how often he should sterilize his pacifier, for example.

After the birth of his second child, Gilbert, a scientist who studies microbial ecosystems at the University of Chicago, decided to find out what's actually known about the risks involved when modern-day children come in contact with germs.

"It turned out that most of the exposures were actually beneficial," Gilbert says. "So that dirty pacifier that fell on the floor — if you just stick it in your mouth and lick it, and then pop it back in little Tommy's mouth, it's actually going to stimulate their immune system. Their immune system's going to become stronger because of it."

Gilbert is now the co-author of a new book called Dirt is Good: The Advantage of Germs for Your Child's Developing Immune System. Presented in a Q&A format, the book seeks to answer many of the questions Gilbert has fielded from parents over the years. 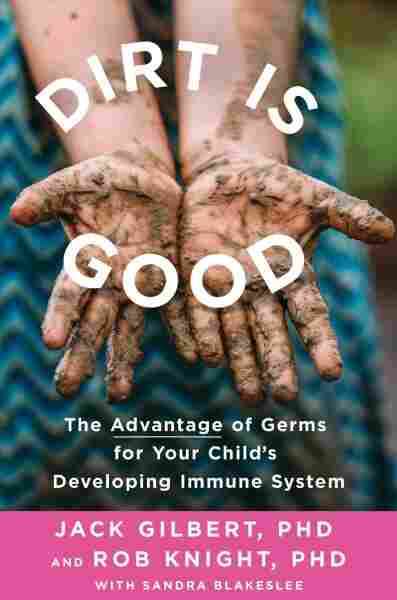 The Advantage of Germs for Your Child's Developing Immune System

What are some things that parents get wrong?

Some of the main things are over-sterilizing their environment, keeping their children from ever getting dirty. So going out into the backyard and playing in the mud, and then as soon as they're filthy, bringing them in and sterilizing their hands with antiseptic wipes, and then making sure that none of the dirt gets near their faces. Also, keeping them away from animals. The dogs and cats, sure, but also, other animals. It's fine to wash their hands if there's a cold or a flu virus around, but if they're interacting with a dog, and the dog licks their face, that's not a bad thing. In fact that could be extremely beneficial for the child's health.

What about hand sanitizer? Good or bad?

How about the five-second rule? The idea that if something falls on the ground and is there for under five seconds, it's clean.

The five-second rule doesn't exist. It takes milliseconds for microbes to attach themselves to a sticky piece of jammy toast, for example. But it makes no difference. Unless you dropped it in an area where you think they could be a high risk of extremely dangerous pathogens, which in every modern American home is virtually impossible, then there's no risk to your child.

Wash a pacifier or lick it if it falls on the ground?

Lick it. A study of over 300,000 children showed that parents who licked the pacifier and put it back in — their kids developed less allergies, less asthma, less eczema. Overall, their health was stronger and more robust. [Editor's note: See the correction below. Just 184 children were involved in the study.]

Are things like allergies an unintended consequence of trying to protect our kids too much?

Absolutely. In the past, we would have eaten a lot more fermented foods, which contain bacteria. We would have allowed our children to be exposed to animals and plants and soil on a much more regular basis. Now we live indoors. We sterilize our surfaces. Their immune systems then become hyper-sensitized. You have these little soldier cells in your body called neutrophils, and when they spend too long going around looking for something to do, they become grumpy and pro-inflammatory. And so when they finally see something that's foreign, like a piece of pollen, they become explosively inflammatory. They go crazy. That's what triggers asthma and eczema and often times, food allergies.

Give us some advice. What should I allow my child to do?

Oftentimes, it's hard to get your kid to eat a healthy diet. I would strongly try to encourage the consumption of more colorful vegetables, more leafy vegetables, a diet more rich in fiber as well as reducing the sugar intake. But just generally, allow your kid to experience the world. As long as they're properly vaccinated, there's no threat, and they will actually get a stronger, more beneficial exposure.

Read an excerpt of Dirt Is Good

Jordana Hochman, Lucy Perkins, Ned Wharton and Sophia Boyd produced and edited this interview for broadcast, and Andrea Hsu adapted it for the Web.