Accessibility links
Dementia Patients Benefit From Sense Of Control And Independence : Shots - Health News Patients with memory loss and other cognitive problems responded well to one-on-one conversations aimed at increasing their sense of control and independence.

Social Interaction Improves Quality Of Life For People With Dementia

Social Interaction Improves Quality Of Life For People With Dementia 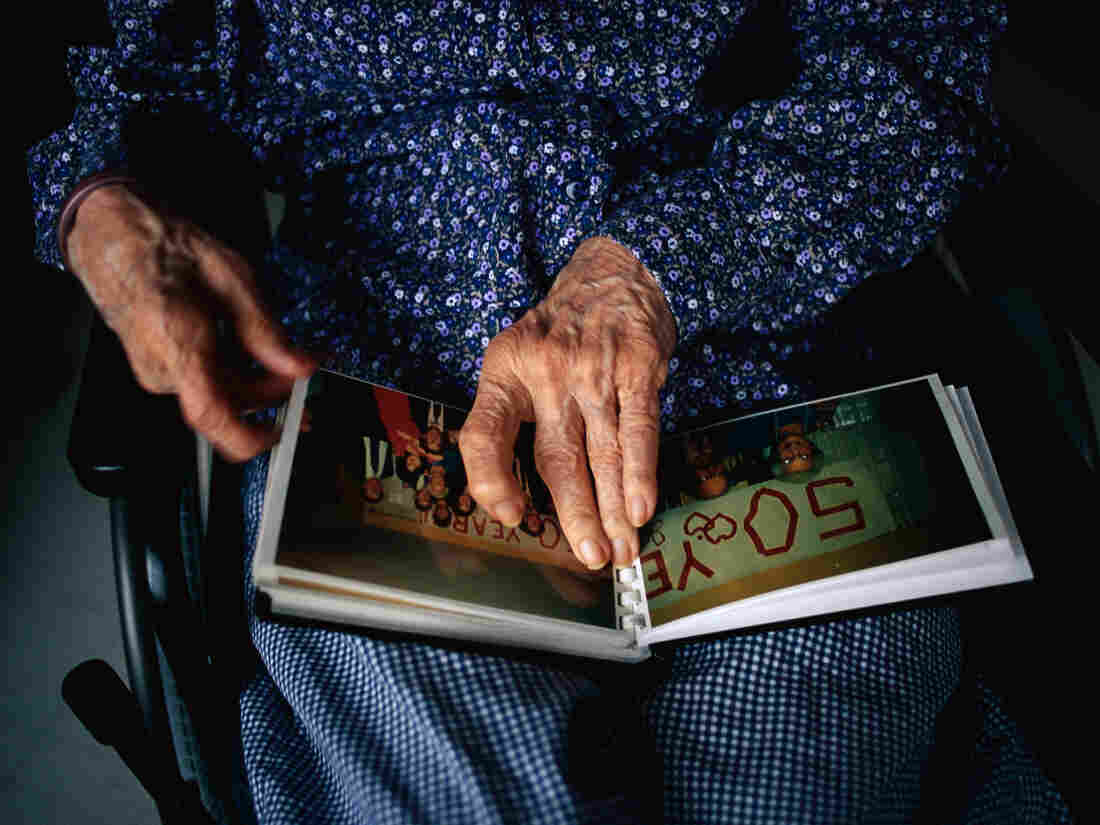 Researchers find that dementia patients who engage in activities such as gathering photographs and talking about family see improvements in their quality of life and are less agitated. Owen Franken/Getty Images hide caption 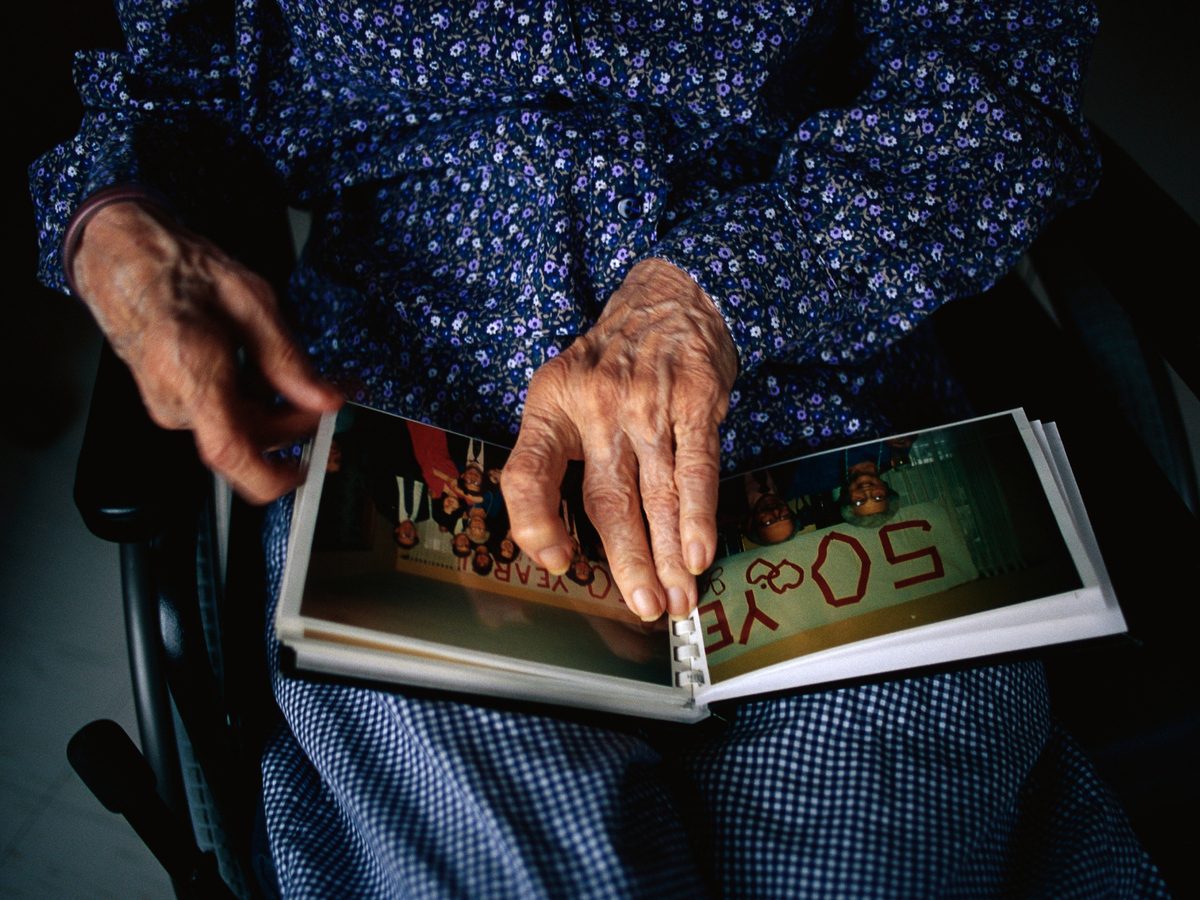 Researchers find that dementia patients who engage in activities such as gathering photographs and talking about family see improvements in their quality of life and are less agitated.

In nursing homes and residential facilities around the world, health care workers are increasingly asking dementia patients questions: What are your interests? How do you want to address us? What should we do to celebrate the life of a friend who has passed away?

The questions are part of an approach to care aimed at giving people with memory loss and other cognitive problems a greater sense of control and independence. At its core is the idea that an individual with dementia should be treated as a whole person and not "just" a patient.

Scientists sometimes call this approach an ecopsychosocial intervention. The goal is to create environments that better meet patients' psychological and emotional needs through strategies other than medication.

At the Alzheimer's Association International Conference this week in London, researchers from the U.S., the U.K. and Israel presented data from four trials demonstrating that such interventions significantly improve residents' mood and quality of life. The interventions can also reduce their use of antipsychotic drugs and improve their ability to care for themselves.

Taken together, these studies and others suggest that relatively simple and potentially cost-effective interventions can yield significant benefits for people with dementia, even those in residential facilities in the later stages of disease.

As the population continues to age, and the number of people with dementia continues to rise, these interventions are likely to increase in importance as well.

In the U.K., 70 percent of people in care facilities are estimated to have dementia, according to the Alzheimer's Society.

"An awful lot of people with dementia are living in care homes," says Clive Ballard, executive dean of the University of Exeter Medical School in the U.K., who presented one of the studies. "The quality of care is really inconsistent."

While nursing and residential facilities are likely adept at things like preventing pressure ulcers, they are less skilled at responding to residents' social and emotional needs, he says. "If you're actually trying to give people the best lives you can give them, that's a really important aspect," says Dr. Ballard.

In what is thought to be the biggest randomized trial to date of this approach in care facilities, Dr. Ballard and his team evaluated some 800 residents at 69 care homes across the U.K.

As part of the study, a "care champion" from each facility took part in four days of training and then went back to coach others. The goal was for every resident to get at least one hour a week of social interaction with a health care worker.

The staff would ask residents what activities they liked doing and then work to find something that would be appropriate for their skill level. Residents might gather photographs and talk about family, or spend time gardening or talking about gardening, depending on their ability.

The staff were trained to use prompts and cues, so that the conversations could flow more naturally, says Dr. Ballard.

The researchers carried out the intervention for nine months and then followed up with the residents for nine months. They found that participants reported a significant improvement in their quality of life. The intervention also reduced their agitation as effectively as antipsychotic drugs.

"It's really about helping people with their own goals," says Dr. Ballard, whose group published a smaller trial last year in the American Journal of Psychiatry. The new results presented Sunday are being reviewed for publication.

Ballard's team has partnered with two British non-profit organizations to train care staff in the southwest of the country. They hope to roll the approach out to 1,000 care facilities soon, he says.

Another person-centered, ecopsychosocial approach is based on the concept used in Montessori schools for young children: fostering independence by assessing and incorporating each person's stage of development.

"We look at dementia as a form of disability rather than as a disease," says Cameron Camp, director of research and development at the Center for Applied Research in Dementia in Solon, Ohio. "When you focus on dementia as a disease, then you're focusing on deficits. Our approach is — what can we do to help these people?"

The approach makes use of individualized plans to assist patients. For some residents, it may mean giving them written schedules and teaching them to check off activities they've completed, so they can see where they are during the day. Other residents may be confused about the date when the see a monthly calendar but can understand a single-day calendar. Knowing the correct date helps them feel more oriented and improves self-confidence, says Dr. Camp.

In a small study published last year in the journal Advances in Aging Research, Dr. Camp's group found that participants of such a program showed improvement in some activities of daily living such as being able to feed themselves. They also decreased their use of antipsychotics, antidepressants and sleeping pills.

"When people are engaged and awake during the day, they sleep at night," says Dr. Camp.

Addressing loneliness and boredom are the two most important needs for many elderly in these settings, according to Jiska Cohen-Mansfield, a professor in the department of health promotion at Tel Aviv University in Israel.

In a pilot study of 69 residents in six dementia nursing home units, she and her team identified some of the most challenging residents and found those who participated in group activities saw an improvement in mood compared to people in control conditions. Many of their disruptive behaviors disappeared as well, she reported during her conference presentation.

When implementing the experimental program, she had to convince staff to give it a try, telling them that it didn't matter if the program worked or not.

Residents quickly responded to the program, especially the physical activities. In one, they had to catch and pass a ball. They had no confidence initially, recalls Dr. Cohen-Mansfield, but that changed as they realized they could do it. The group session, which was supposed to run for half an hour, went on for 90 minutes.

Shirley Wang is a writer based in London. She can be found on Twitter @ShirleyWang.