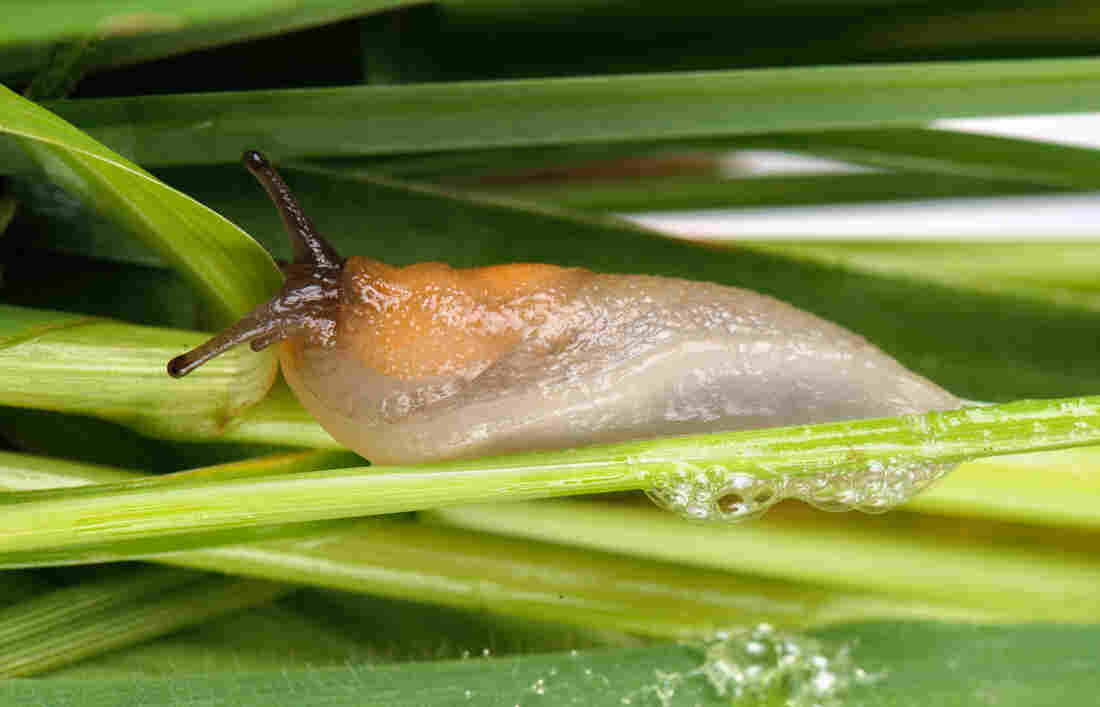 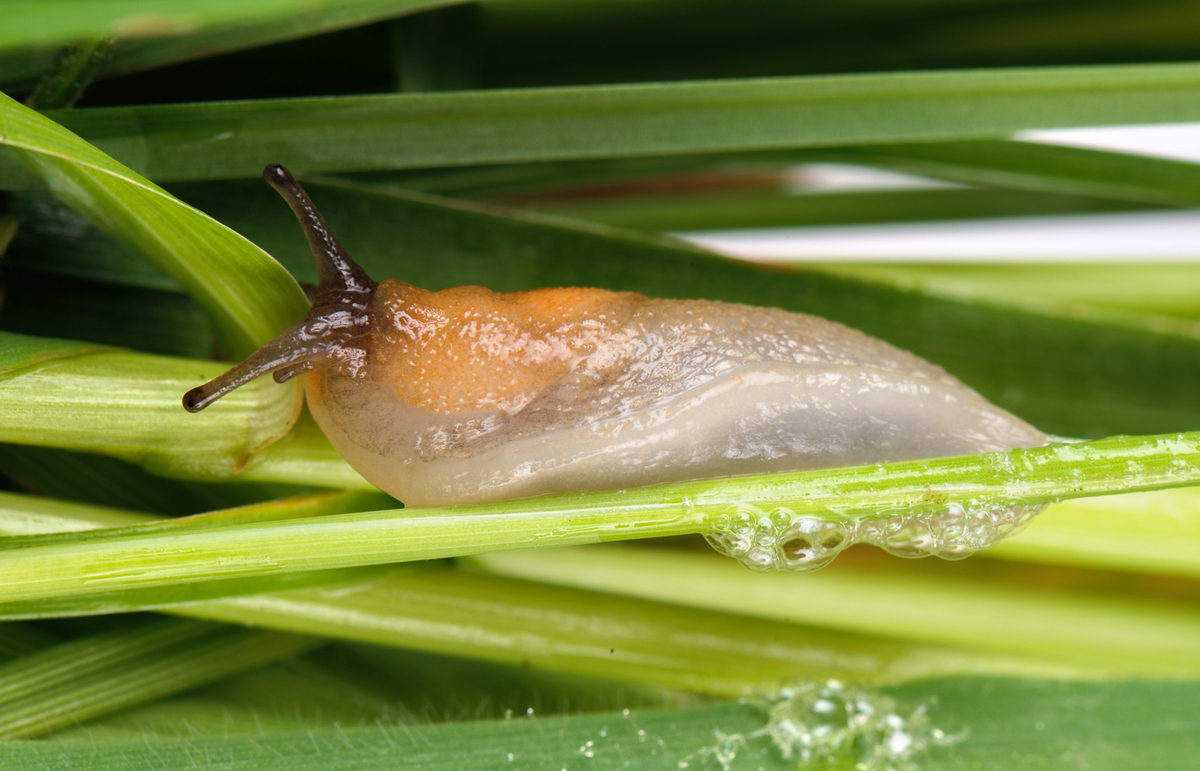 The European slug is average in every way: slimy, brownish, shorter than a credit card.

But Arion subfuscus has a minor superpower: When it's scared, it can glue itself to wet surfaces very well, and do so while remaining bendy.

"That's a very challenging problem in the material and also in the biomedical world," says Jianyu Li, a materials scientist with Harvard's Wyss Institute for Biologically Inspired Engineering. "Those represent the biggest challenge in terms of adhesive development."

For some time now, scientists have been searching for a better adhesive for surgery and wound healing.

Li had been combing the scientific literature for clues to how to make a better surgical adhesive, something that could repair a delicate organ without causing the damage of stitches or staples, or the risk of air or fluid leaks. As he and his colleagues report Thursday in the journal Science, this slug-slime-inspired material could help a lot.

Usually there's a trade-off between flexibility and stickiness, Li says. Super Glue works well on dry surfaces, but it's rigid and toxic, so it would never work for patching a beating heart or a bleeding wound. Other materials are flexible but not very sticky.

And then there's defensive slug slime.

When people get scared, they go into fight-or-flight mode. When the Dusky Arion slug gets scared by, say, a circling bird, it seeps an extra-sticky goo from its skin. The goo is adhesive enough that if a bird tried to pry the slug off a leaf, Li says, it might hold the slug safely in place — like chewing gum stuck to the bottom of a shoe.

"The defensive mucus turns out to be very sticky and also very strong and highly stretchable," says Li. "That kind of inspired us."

He and his colleagues used the slug slime as a starting point to engineer a new adhesive material that combines ingredients like those in the slug mucus with a flexible gel.

The secret to the slug slime is that it can bond to surfaces in three different ways. It contains a chemical called a primary amine that has a positive charge. When it interacts with tissues and cells, which are negatively charged, the two surfaces attract like clingy laundry in the dryer. The material can also bond chemically to tissue, and it can physically attach by intertwining surface proteins like tangled telephone cords.

Li and his colleagues created a tough gelatin-like patch that is 90 percent water from a compound secreted by algae that has similar properties as the slug mucus.

The result is as sticky as super glue, stretchier than a rubber band, works on wet surfaces and isn't toxic to human cells. Li says the material sticks as well to organs as cartilage does to bone.

In animal experiments, the patches successfully stuck to bloody pig skin and to bloody, beating pig heart. It also patched holes in rat livers, remaining sticky for the duration of the two-week experiment. An injectable version sealed a hole in a pig heart, withstanding repeated expansion. In a 24-hour test on human cells, it didn't cause any damage. In rats, the adhesive caused less inflammation than other materials tested.

"What struck me about this paper is they seem to have developed an elegant approach to a strong adhesion and biocompatibility in a way that can be practically applied in a clinical setting," says Blanka Sharma, a biomedical engineer at the University of Florida, who wasn't involved in the paper.

There have been a lot of developments in medical adhesives but, she says, current offerings are still "sub-optimal." 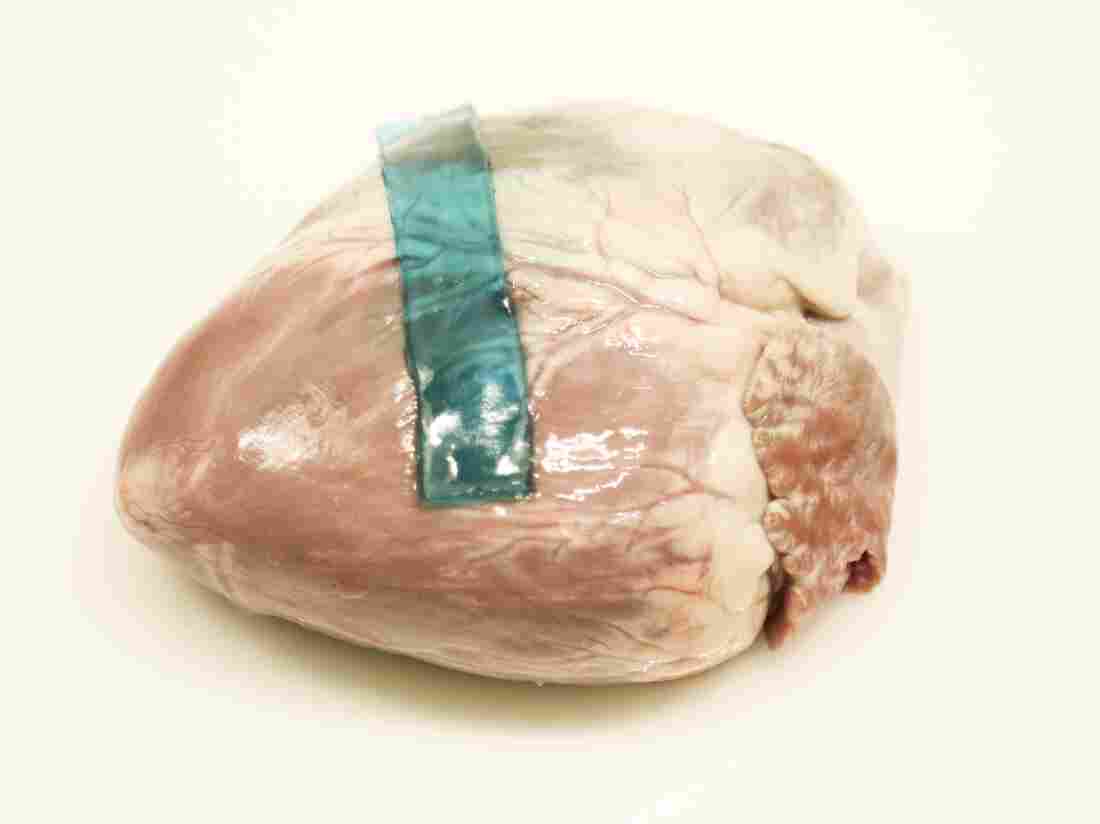 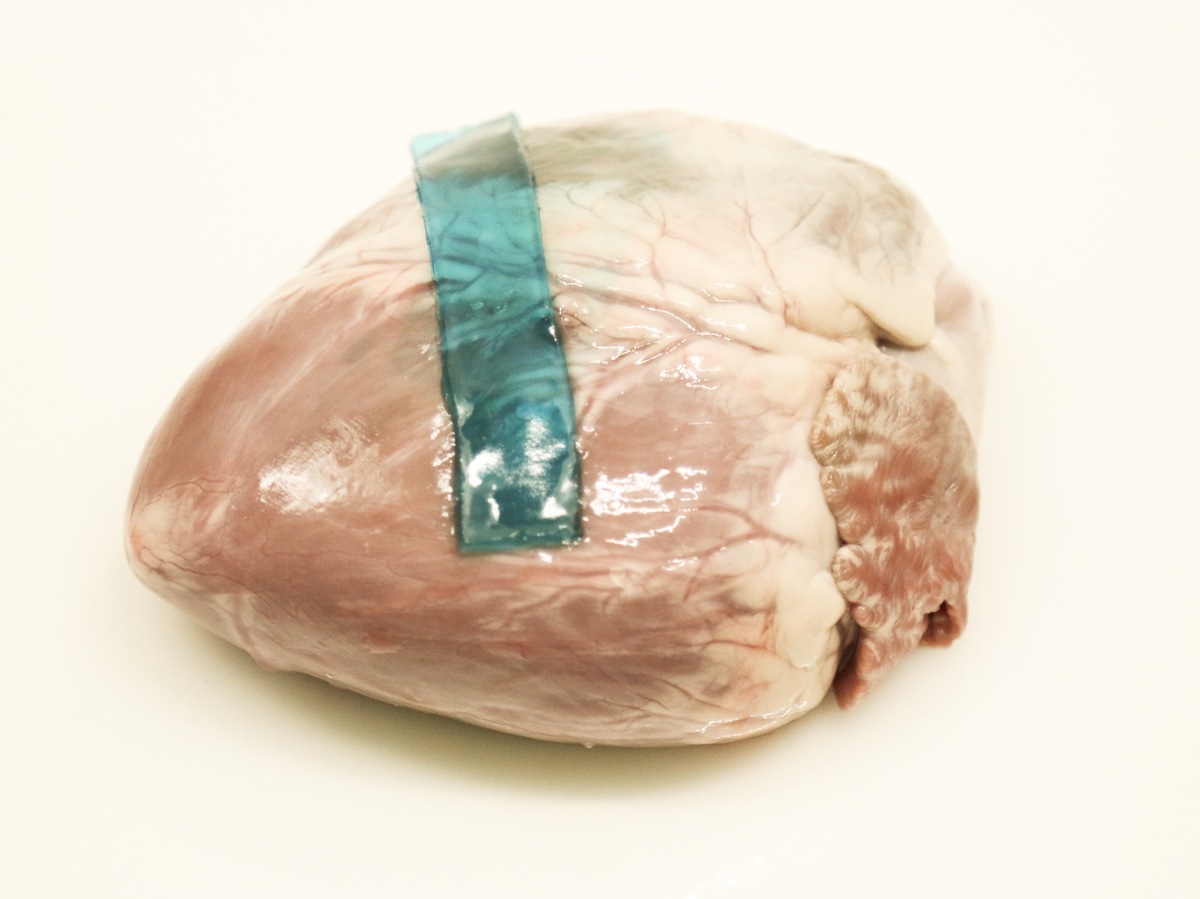 The slug-inspired adhesive stuck easily to pig tissue, like this heart.

Adhesives with similar chemistry to Super Glue have limited uses for medical treatments because of toxicity. Others, like fibrin glue, aren't toxic but are really expensive and can be hard to use.

"We're at a stage where I think we've got technologies that are really close to addressing critical problems in surgery where current techniques aren't sufficient," Sharma says.

For example, she says, an adhesive like the one Li developed might someday help surgeons patch a hole in a baby's heart. Or it could help repair cartilage, which is impossible to suture.

"It's interesting to imagine a time where we may be able to, say, glue tissues together without sutures," says Sharma.

A material like this patch would have to go through years of testing before it might be available for use in humans. In the meantime, Li and colleagues are working on engineering a biodegradable version that might disintegrate once an organ has healed.

Why not just start a slug farm?

"I think the first reason is the cost would be a problem," says Li. "And the second reason is, I'm not a biologist."