Accessibility links
Williams Syndrome Camp Brings Together Country Music and Brain Research : Shots - Health News Researchers in Nashville are tapping into a country music camp to learn more about Williams Syndrome, a rare genetic disorder. Many people who have it love music but don't know why. 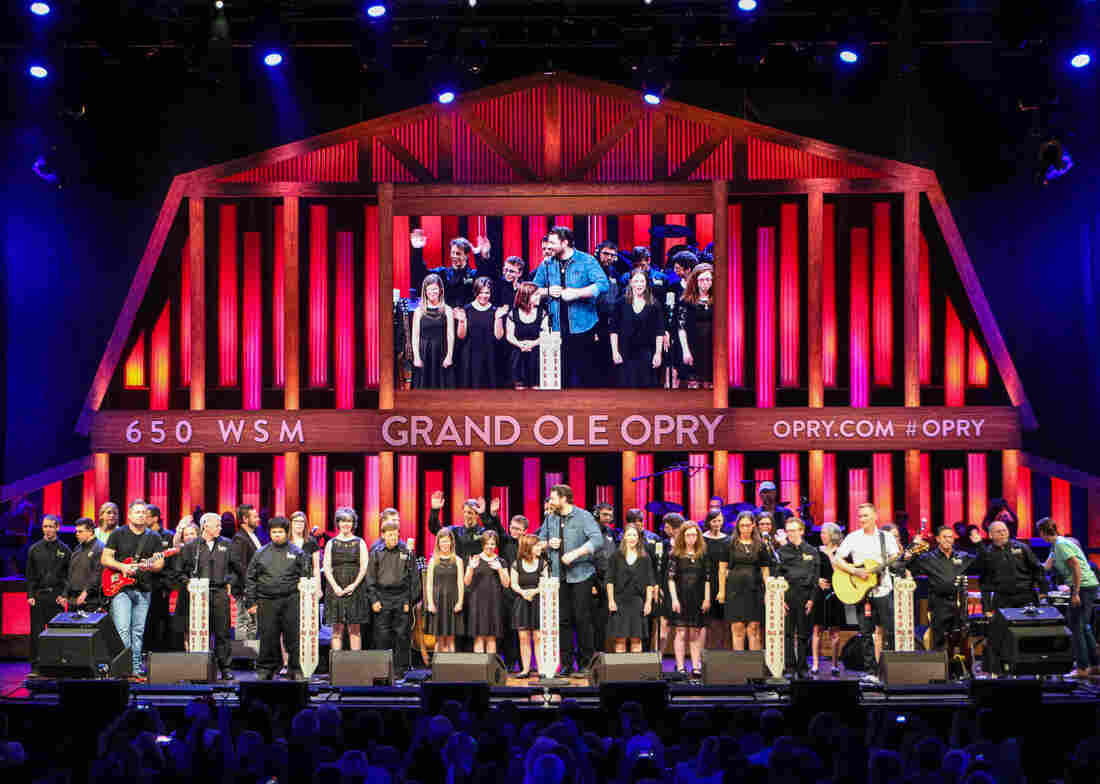 Campers with Williams syndrome on stage at the Grand Ole Opry performing their original song, "I Love Big," with country artist Chris Young in front of a crowd of thousands. Emily Siner/WPLN hide caption 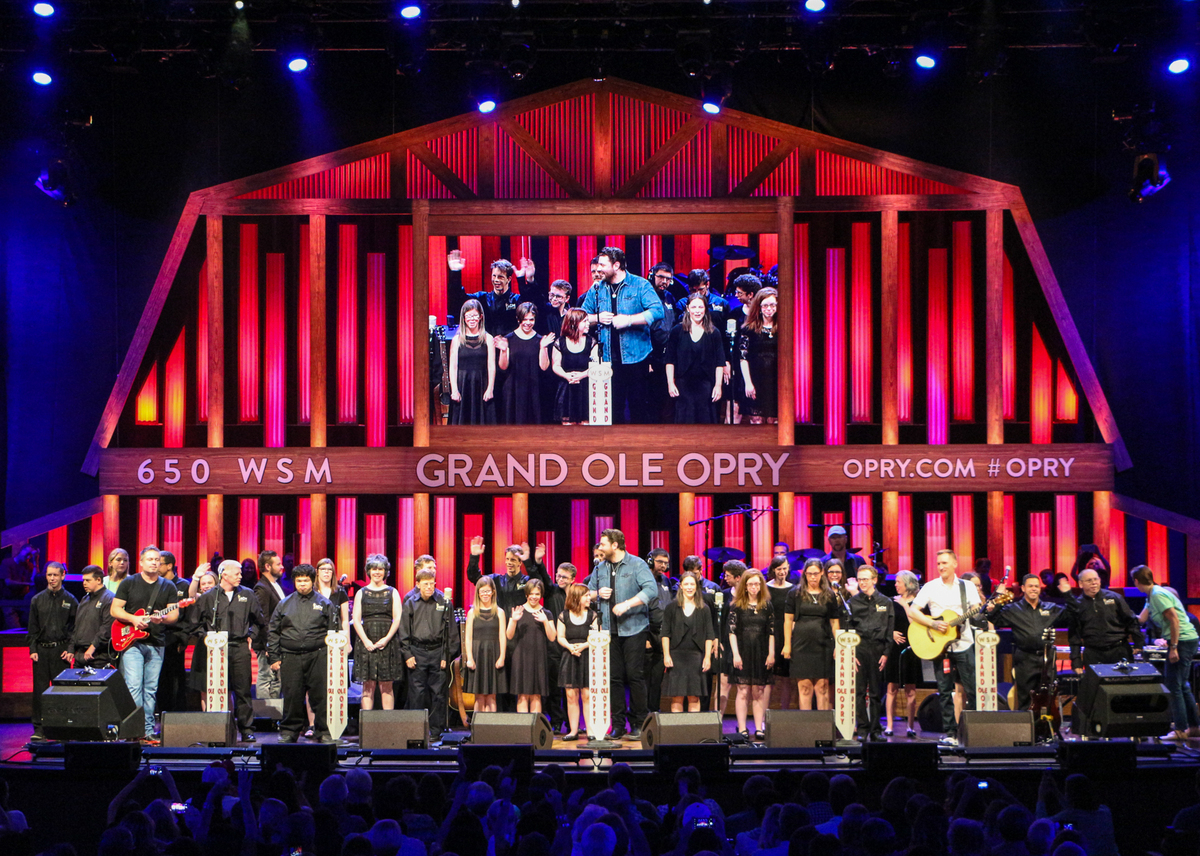 Campers with Williams syndrome on stage at the Grand Ole Opry performing their original song, "I Love Big," with country artist Chris Young in front of a crowd of thousands.

The Grand Ole Opry in Nashville, Tenn., is country music's Holy Land. It's home to the weekly radio show that put country music on the national map in 1925. And it's where this summer, 30 people with Williams syndrome eagerly arrived backstage.

Williams syndrome is a rare genetic disorder that can cause developmental disabilities. People with the condition are often known for their outgoing personalities and their profound love of music. Scientists are still trying to figure out where this musical affinity comes from and how it can help them overcome their challenges.

That's why 12 years ago, researchers at Vanderbilt University set up a summer camp for people with Williams syndrome. For a week every summer, campers come to Nashville to immerse themselves in country music and participate in cutting-edge research.

This isn't the only summer camp for people with Williams syndrome, but it is unique in its distinctive country flair. It's organized by the Vanderbilt Kennedy Center, whose faculty and staff focus on developmental disabilities. Eight years ago, the Academy of Country Music's philanthropic arm, ACM Lifting Lives, started funding the program. 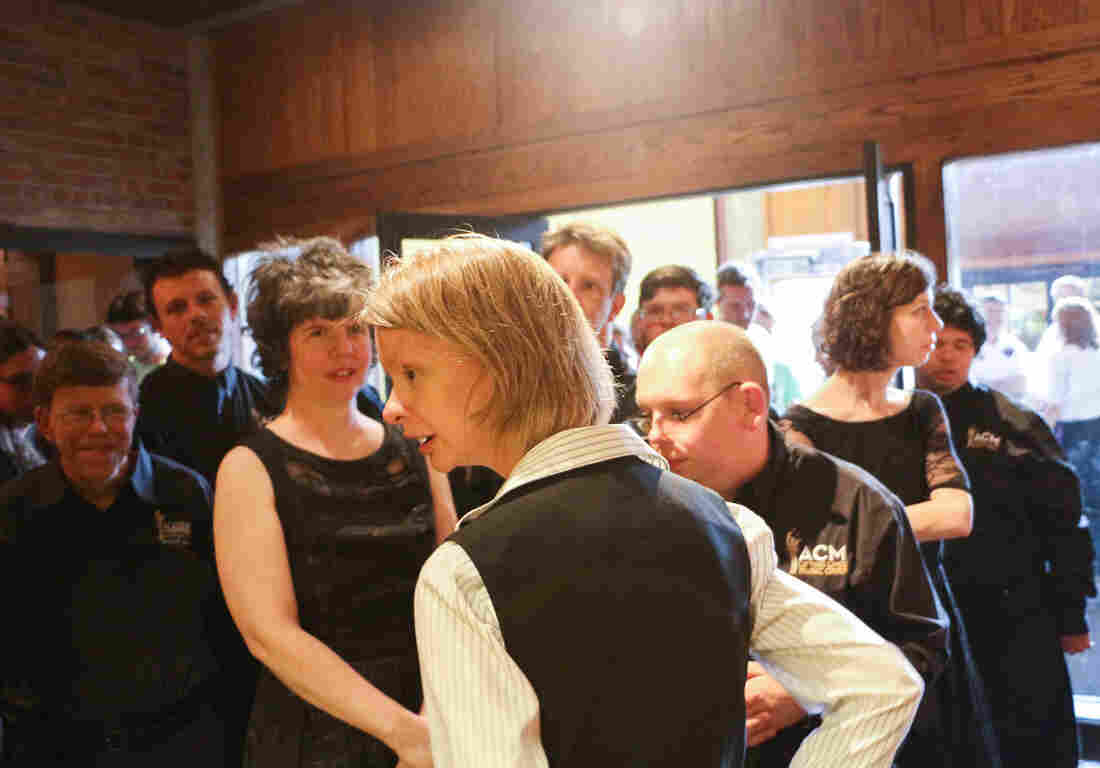 Clancey Hopper leads a tour of the Grand Ole Opry for this year's Williams syndrome campers. Hopper attended the camp for eight years before getting hired as a tour guide at the Opry. Emily Siner/WPLN hide caption 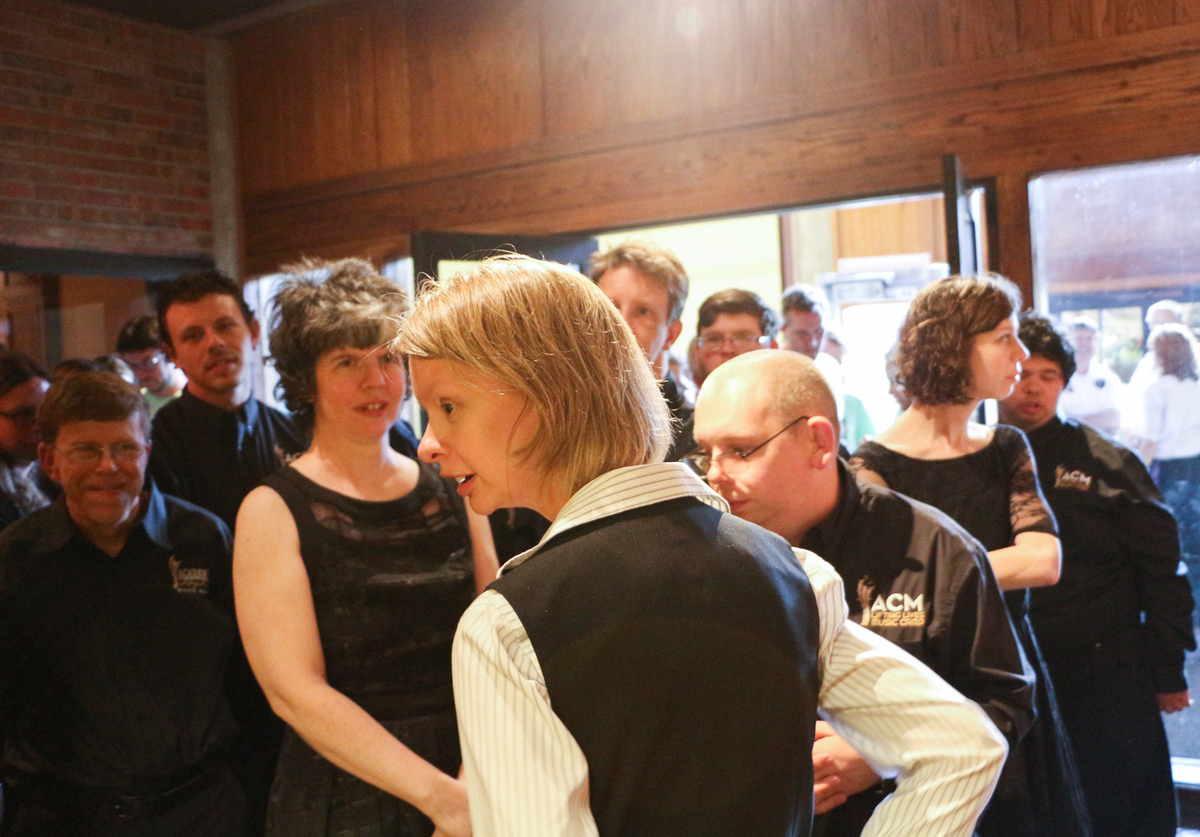 Clancey Hopper leads a tour of the Grand Ole Opry for this year's Williams syndrome campers. Hopper attended the camp for eight years before getting hired as a tour guide at the Opry.

Campers spend the week meeting musicians and visiting recording studios, even writing an original song. This year, they teamed up with one of country's hottest stars, Dierks Bentley, on that. And they get a backstage tour of the Grand Ole Opry led by Clancey Hopper, who has Williams syndrome herself and attended the Nashville camp for eight years before applying for a job at the Opry.

"I honestly never thought that I would have this dream job that I have," she says. "And just to share it with people who are so passionate about music and life itself — it's just great."

Hopper is a master at pumping up the crowd— especially this crowd, who cheer and gasp enthusiastically as she shows them the dressing rooms, the stage and even the numbered mailboxes where Opry members get fan mail.

Sarah Myers, a 23-year-old camper, calls the whole experience a dream come true. "I listen to country music every day, because when I listen to it, there's a smile that I can't take off of me," she says.

People with Williams syndrome often express great fondness for all kinds of music, not just country. Even at a young age, some parents notice that certain songs tend to soothe them particularly well, says Miriam Lense, who studies music and the brain at Vanderbilt and conducts research with the camp.

"You certainly get stories about parents saying that the first time their child started really vocalizing or using words was around song — singing along or filling in the words," Lense says.

There can also be an opposite reaction: When people with the disability don't like a sound, it can seem almost painful, she says.

The exact reasons for this musical sensitivity are still a mystery, but scientists have identified a neurological component. When people with Williams syndrome listen to music, the visual area of the brain is stimulated more so than in other people, Lense says, "which suggests for at least some people with Williams syndrome, one of the reasons music might be so powerful is because it is this incredibly multisensory, very rich experience."

That particular finding came out of a study conducted with camp participants. Researchers are also looking into non-musical ways of helping people with the disability. For example, they now hold mindfulness classes to help campers cope with anxiety — another common characteristic.

Jared Glenn, a 32-year-old camper from Detroit, has noticed a change in himself. "I used to be more hyper and wild, but now I'm more calm and chill," he says. 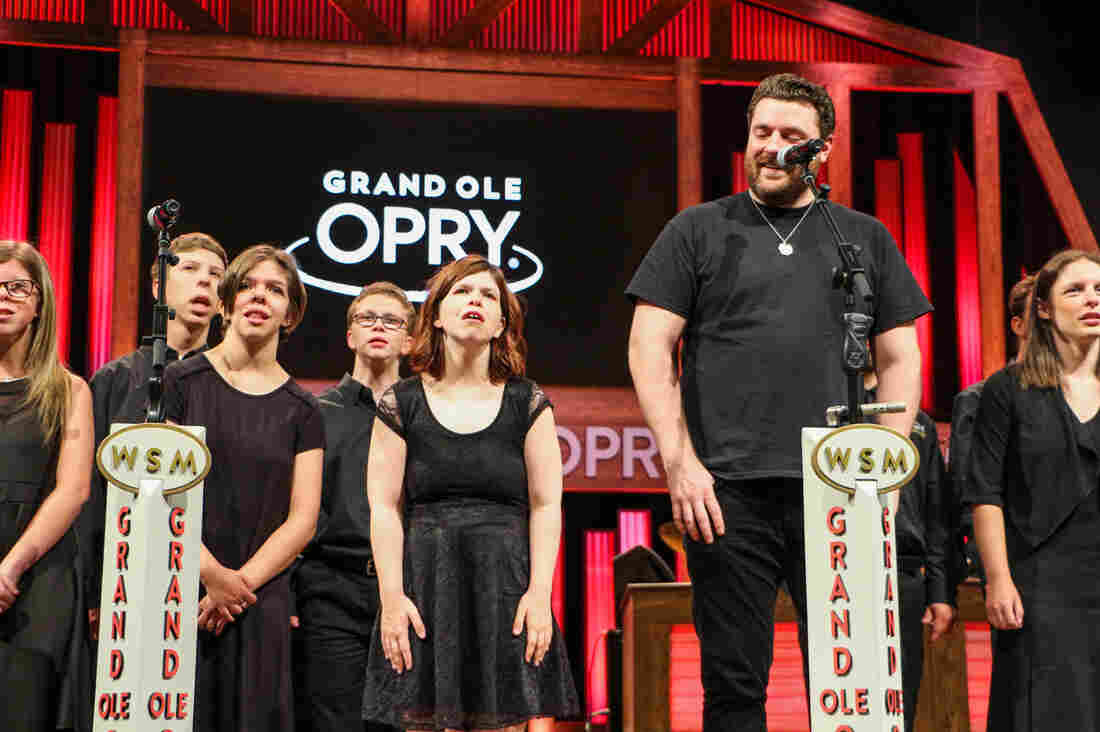 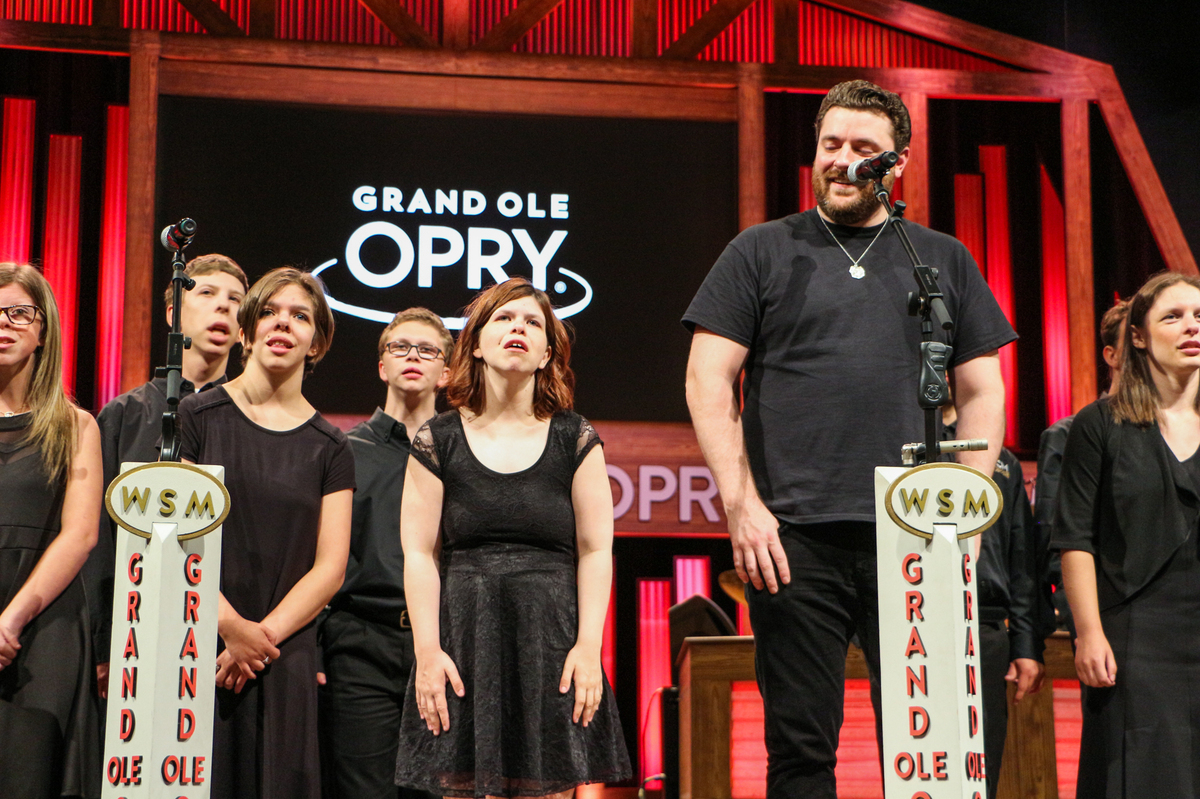 Backstage at the Grand Ole Opry, the campers try to channel that calm as they approach the week's grand finale: performing the song they wrote on stage, before an audience of thousands. Some breathe deeply to steady their nerves.

When they're called to the stage, they're joined by another country artist, Chris Young. Together, they belt out "I Love Big," a song about themselves and their enthusiasm for the world.

But in my heart it's always sunny and 75

Been that way ever since I was a kid

That's just me, I love big.

The way I laugh, the way I smile

Don't be afraid going for the gold

In the last chorus, one camper in the back goes a bit rogue, breaking formation to wave his arms overhead in time with the music. The audience loves it and follows his lead — and at the end, gives the campers a standing ovation.