Accessibility links
Americans Still Avoiding End-Of-Life Care Planning : Shots - Health News Only about a third of U.S. adults have advance directives in place to guide the care they receive if they become too ill to make their own medical decisions. 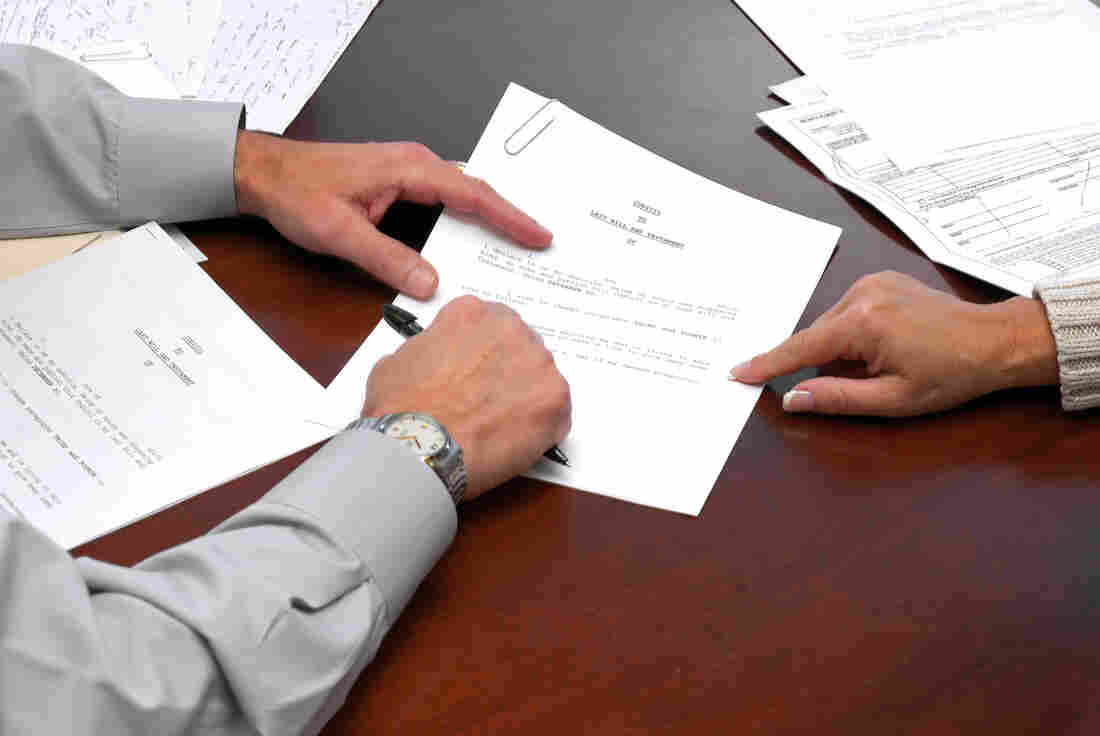 People with chronic illnesses were only slightly more likely than healthy individuals to put their wishes down on paper in a living will. Jodi Jacobson/Getty Images hide caption 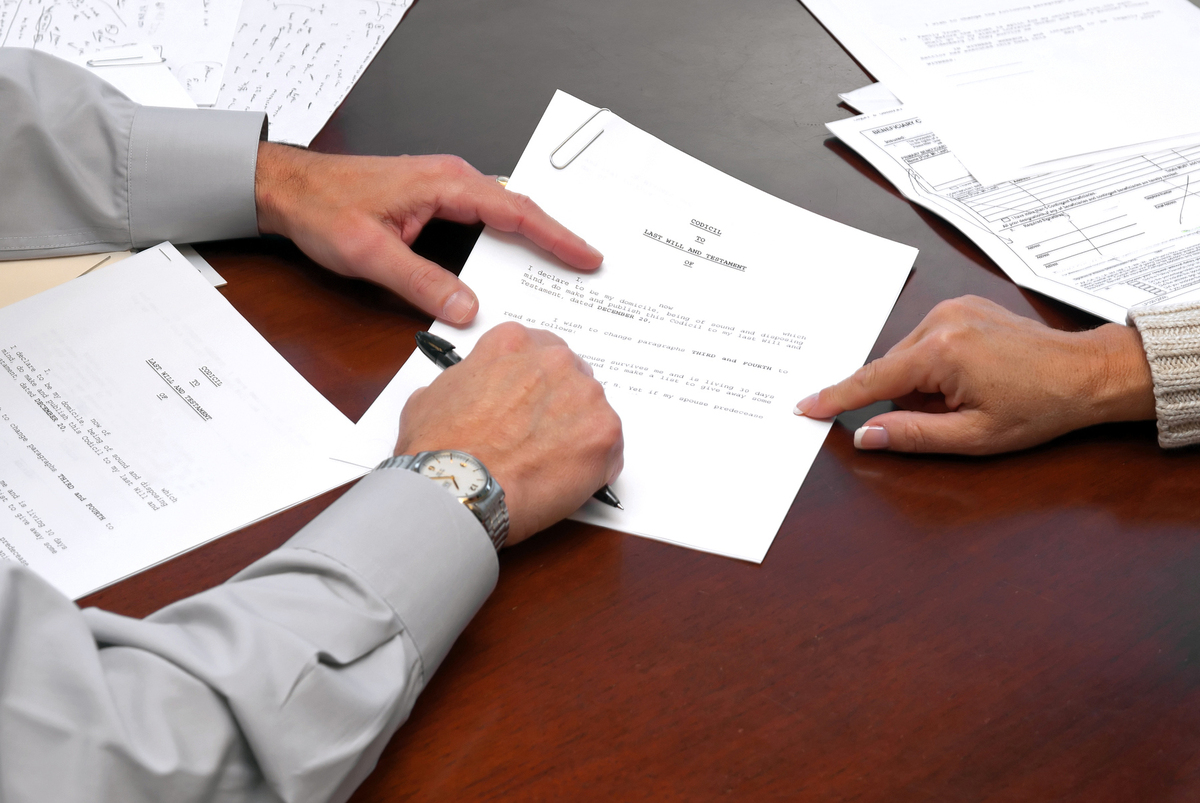 People with chronic illnesses were only slightly more likely than healthy individuals to put their wishes down on paper in a living will.

Before being deployed overseas for the Iraq war in 2003, Army reservist Don Morrison filled out military forms that gave instructions about where to send his body and possessions if he were killed.

"I thought, 'Wow, this is mortality right in your face,'" Morrison, now 70, recalls.

After that, his attention was keenly focused on how things might end badly. Morrison asked his lawyer to draw up an advance directive to describe what medical care he wanted if he were unable to make his own decisions.

One document, typically called a living will, spells out Morrison's preferences for life-sustaining medical treatment, such as ventilators and feeding tubes. The other, called a health care proxy or health care power of attorney, names a friend to make treatment decisions for him if he were to become incapacitated.

Not everyone is so motivated to tackle these issues. Even though advance directives have been promoted by health professionals for nearly 50 years, only about a third of U.S. adults have them, according to a recent study.

People with chronic illnesses were only slightly more likely than healthy individuals to put their wishes down on paper.

People older than age 65 were significantly more likely to complete any type of advance directive than younger ones — 46 percent of older people, versus 32 percent of those who were younger. But the difference between people who were healthy and those who were sick when they filled out the directive was much smaller — 33 percent compared with 38 percent.

To encourage more physicians to help people to plan for their care, the Medicare program began reimbursing them in January 2016 for counseling beneficiaries about advance-care planning.

This study doesn't incorporate data from those changes. But it can serve as a benchmark to gauge improvement, says Dr. Katherine Courtright, an instructor of medicine in pulmonary and critical care at the University of Pennsylvania. She is the study's senior author.

There are many reasons that people are reluctant to sign a living will. "Many people don't sign advance directives because they worry they're not going to get any care if they say they don't want [cardiopulmonary resuscitation]," says Courtright. "It becomes this very scary document that says, 'Let me die.' "

Living wills also don't account for the fact that people's wishes may change over time, says Dr. Diane Meier, a geriatrician and the director of the New York-based Center to Advance Palliative Care.

"In some ways, the public's lack of excitement about this is related to the reality that it's very hard to make decisions about the kind of care you want in the future when you don't know what that will be like," she says.

Sometimes as patients age and develop medical problems, they're more willing to undergo treatments they might have rejected when they were younger and healthier, Meier says.

"People generally want to live as well as they can for as long as they can," she says. If that means going on a ventilator for a few days in order to get over a bout of pneumonia, for example, many may want to do that.

But if their living will says they don't want to be put on a ventilator, medical staff may feel bound to honor their wishes. Or not. Although living wills are legal documents, medical staff and family members or loved ones can reinterpret them.

"At the moment, I'm very healthy," Morrison says. If he were to become ill or have a serious accident, he'd want to weigh life-saving interventions against the quality of life he could expect afterwards. "If it were an end-of-life scenario, I don't want to resuscitated," he says.

If someone's wishes change, the documents can be changed. There's no need to involve a lawyer in creating or revising advance directives, but they generally must be witnessed and may have to be notarized.

While living wills can be tricky, experts strongly recommend that people at least appoint a health care proxy. Some even suggest that naming someone for that role should be a routine task that's part of applying for a driver's license.

"Treatment directives of any kind all assume we can anticipate the future with accuracy," says Meier. "I think that's an illusion. What needs to happen is a recognition that decisions need to be made in real time and in context."

That's where the health care proxy can come in.

But to be effective, though, people need to have conversations with their proxy and other loved ones about their values and what matters to them at the end of life.

They may tell their health care proxy that they want to die at home, for example, or that being mobile or able to communicate with their family is very important, says Jon Radulovic, a vice president at the National Hospice and Palliative Care Organization.

Some may opt to forgo painful interventions to extend their lives in favor of care that keeps them comfortable and maintains the best quality of life for the time that remains.

"The most important thing is to have the conversation with the people that you love around the kitchen table and to have it early," says Ellen Goodman, a Pulitzer Prize-winning writer who founded The Conversation Project, which provides tools to help people have conversations about end-of-life issues.

Morrison says he's glad he's put his wishes down on paper. "I think that's very important to have. It may not be a disease that I get, it may be a terrible accident. And that's when [not knowing someone's wishes] becomes a crisis."