Accessibility links
Longtime Heroin Addict Fights For Recovery : Shots - Health News Andrea Towson was known in West Baltimore as the go-to person for help getting high. Last year, she nearly died from a fentanyl overdose. "Thank God for another day," she says. 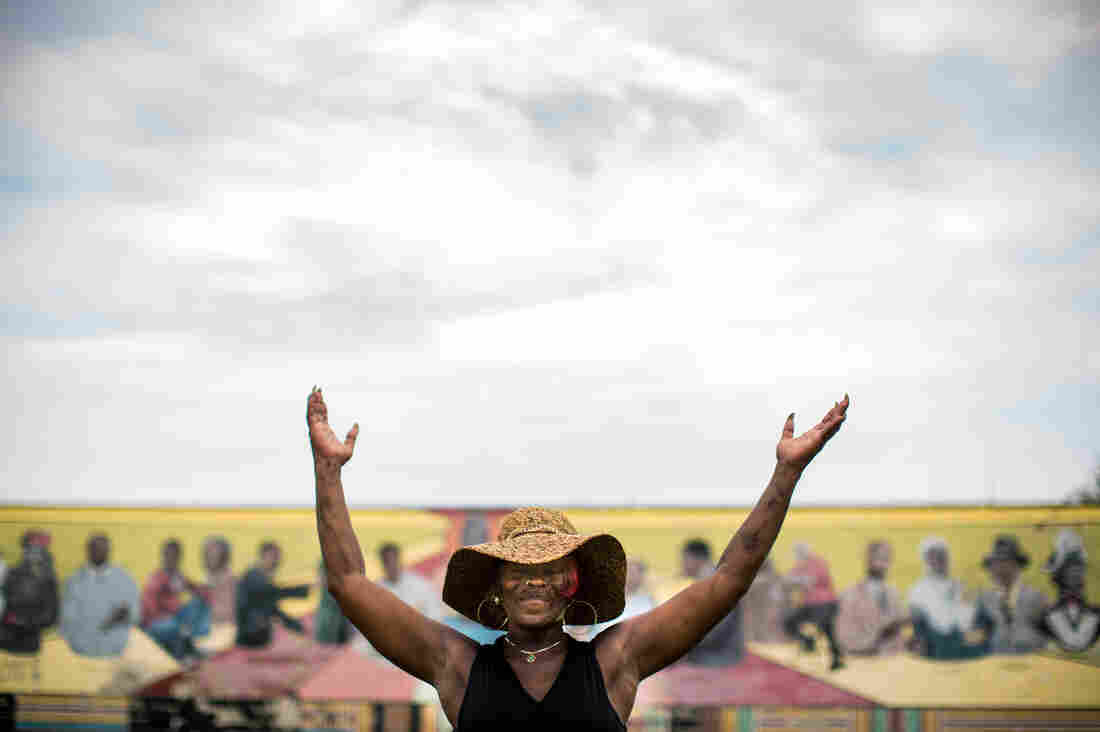 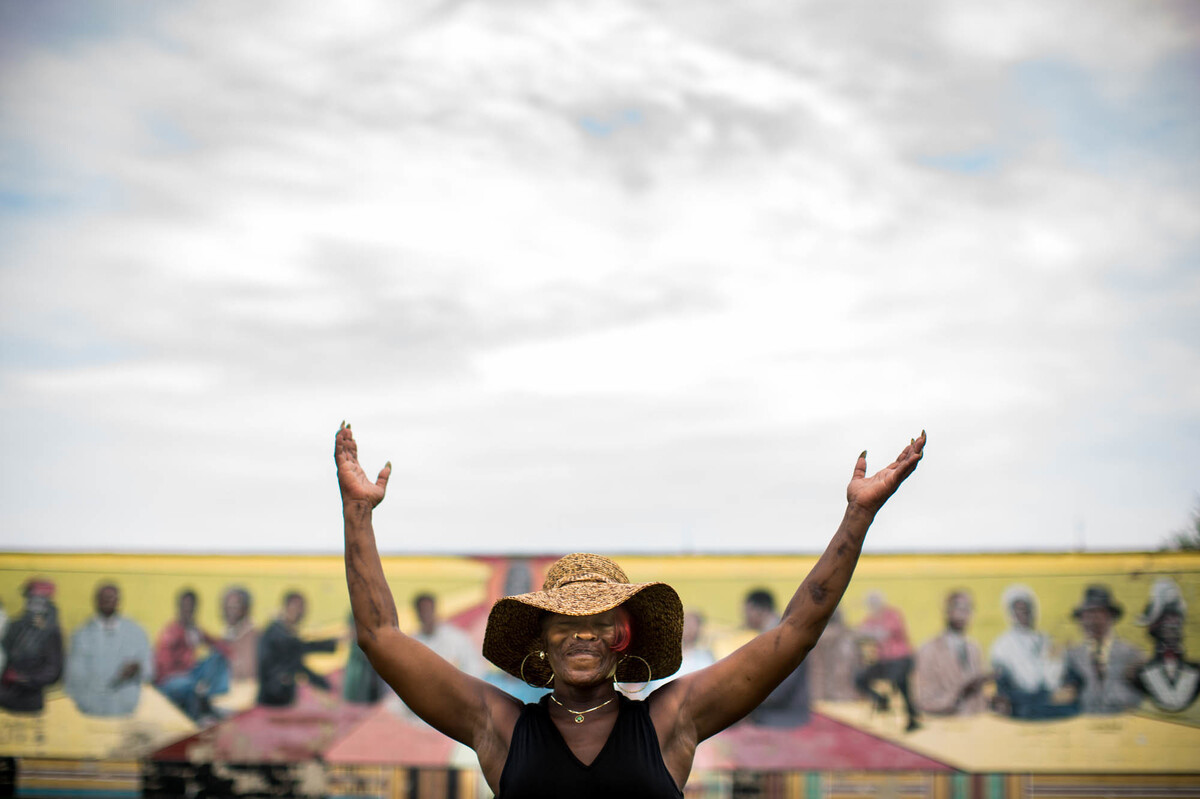 Andrea Towson used heroin for more than three decades. After a near-death experience with fentanyl, she sought help.

Two summers ago, we met a woman who went by the name Teacup.

"I'm an active heroin user," she told us. "Thirty-three years as a matter of fact."

We were in West Baltimore, reporting on a citywide effort to stop a growing opioid crisis. On a street corner known for its open-air drug market, health workers trained anyone passing by on how to use naloxone, a medication that can reverse an opioid overdose. They were trying to get naloxone kits into as many hands as possible.

Teacup had stopped by the training to say hello to a veteran health worker and to pick up another kit. She was already well-versed in the use of naloxone, having administered it more than a dozen times, she estimated. She called herself a "doctor" but not because of her experience intervening in overdoses. It was because she was the go-to person in the neighborhood if you needed help getting high.

"I can hit veins that most people can't," she explained at the time. "I'm not glorifying it, but they come to me because they know I ain't going to let you die. And you're going to be OK. If you do go out, I'm going to bring [you] back, and I'm going to call the ambulance afterward."

Teacup's real name is Andrea Towson. We tried to keep in touch with her, but it wasn't easy. Her daily routine consisted of waking up, trying to make money for heroin, looking for heroin, buying heroin, shooting it and then starting that process all over again.

Finally, on a cold winter day in 2016, we sat down with her again on a park bench not far from where we had first met. Her face was drawn, and she seemed listless. She told us she was tired.

"I want this chapter of my life to close. Just end. I'm just — I'm done. And it's not happening fast enough," she told us. "I just want to wake up and eat breakfast and be normal, whatever that might be."

What followed may sound familiar to people who struggle with addiction. Towson sought treatment, only to find herself on a waiting list. Other times, she missed appointments with rehabilitation programs.

For many months, we didn't know what happened to Teacup. But then this summer, we got word that she had eventually made it into treatment and had just celebrated eight months of recovery. 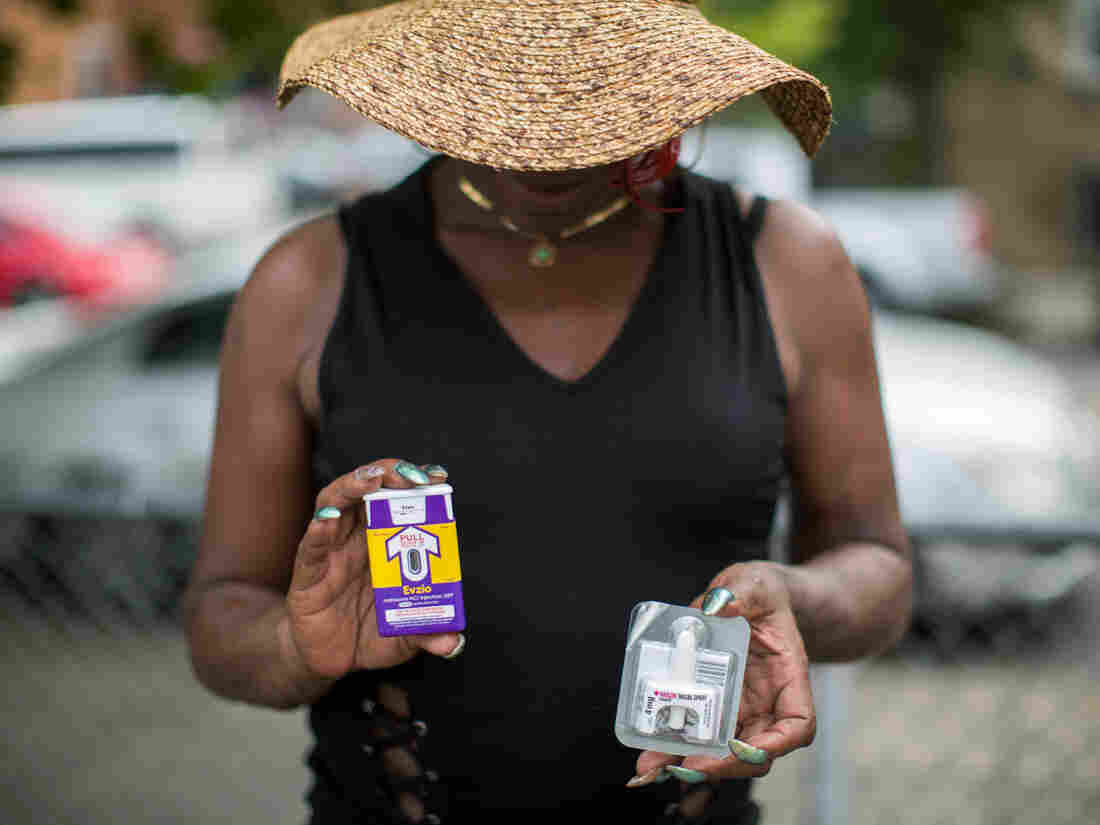 Towson carries two naloxone kits with her at all times and has used them to revive people who overdose. She now trains the public on how to use naloxone. Shelby Knowles/NPR hide caption 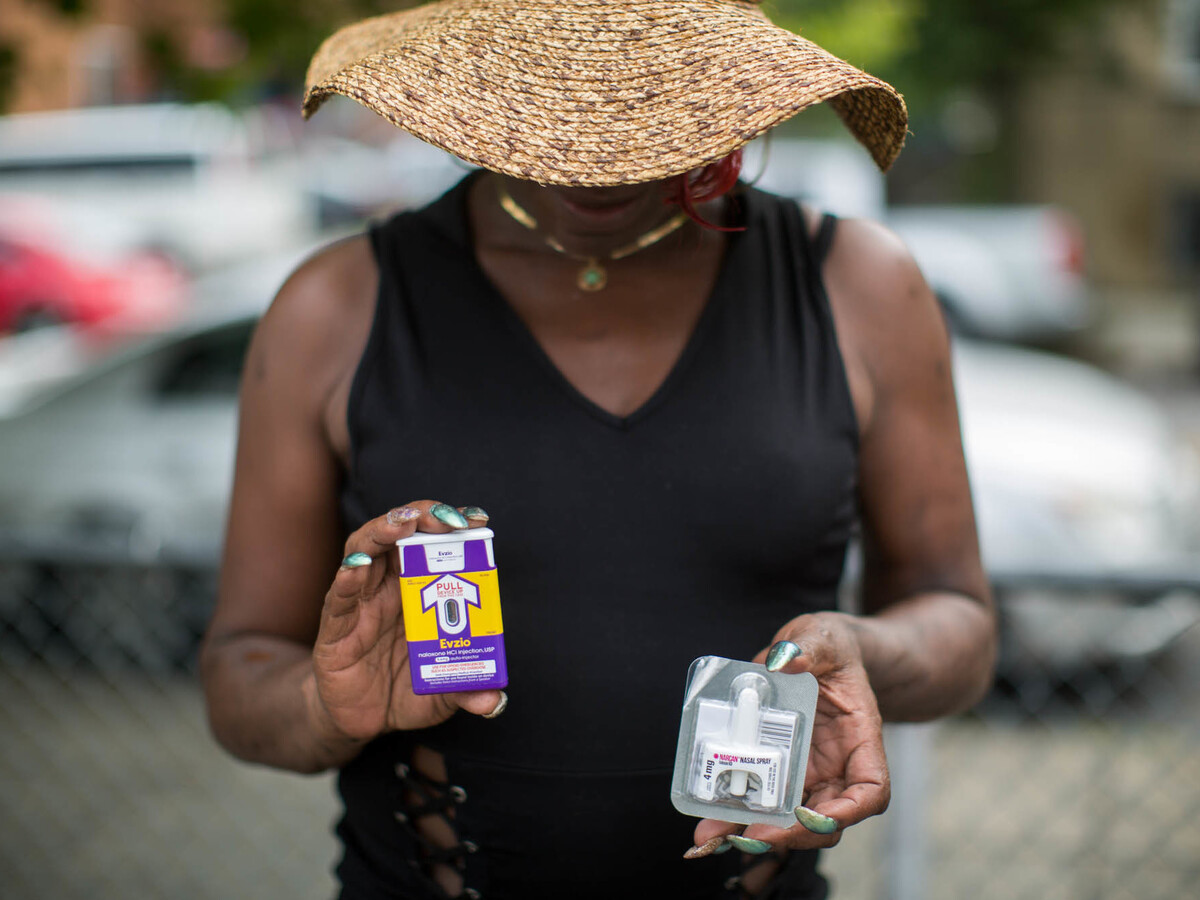 Towson carries two naloxone kits with her at all times and has used them to revive people who overdose. She now trains the public on how to use naloxone.

We caught up with her on a sweltering July day, just across from the recovery center known as Penn North, where she has been in programs since last fall.

As we sat down to talk, six police cars screamed by.

"Lord, I hope nobody's child is dead," she said as she waited for the sirens to fade. "It's just so crazy."

That stretch of West Baltimore hadn't changed much since we were last there, but Andrea Towson had.

She was barely recognizable — in a good way — wearing a slim black dress, a straw hat and sunglasses.

The small yard outside of Penn North overflowed with people sitting on metal folding chairs, fanning themselves and chatting in the heat. All recovering addicts, Towson said.

Demand for addiction treatment is high in Baltimore, as it is in many cities and communities across the country. Towson believes the reason is the spread of fentanyl, a synthetic opioid far more powerful than heroin.

"Nowadays, everybody's scared. That fentanyl — that's death," she said. "I thank God I chose when I did — or He appointed me to be chosen — to change my mind when I did, because I know I wouldn't have made it. ... Thank God for another day."

Towson had her own near-death experience with fentanyl more than a year and a half ago, during a blizzard that dropped more than 2 feet of snow on Baltimore. She was getting high with a group of people, she told us. She and another woman were given the task of testing a new batch of dope. She wouldn't know until later that it was laced with fentanyl. It would be her first and last taste of the drug.

Towson was known in her West Baltimore neighborhood as Teacup. For years, she was the go-to person for help getting high. Shelby Knowles/NPR hide caption

Towson was known in her West Baltimore neighborhood as Teacup. For years, she was the go-to person for help getting high.

"When I opened my eyes, I was being lifted in the air," she recalled. "All I kept saying was 'I'm so cold.' They had set us outside and left us — didn't call an ambulance or nothing."

Towson was lucky. She said a police helicopter spotted her and called an ambulance. By the end of the night, she had been revived twice and hospitalized.

Still, she didn't stop getting high. It took more than six months — and seeing more and more people around her dying of overdoses — for her to finally commit to treatment.

"This is my truth. When you ready, you ready, and when you not, you not," said Towson. "And only you know that."

Recovery has its share of challenges. Towson needs to find a long-term place to live. She needs steady work. And she has to stay off drugs while living in the same neighborhood where she spent so many years getting high.

Her plan is to stick to a routine. She attends a daily support meeting and is working with the nonprofit health advocacy organization Bmore Power, which holds naloxone trainings and other events for people at risk in Baltimore.

As for waking up, having breakfast and being "normal"? That has been achieved.

"Abso-damnit-lutely," she said with a broad smile. "I eat bagels now, with cream cheese."

All Things Considered intern Lee Mengistu contributed to this report.

A previous version of this story described a meeting with Andrea Towson in January. That meeting occurred in early 2016.