Accessibility links
Big Firms Are Again Embracing Job-Based Health Insurance : Shots - Health News Three years ago, only about a quarter of the nation's large employers were "very confident" they would offer health insurance to their workers in 10 years. That number has now risen to 65 percent. 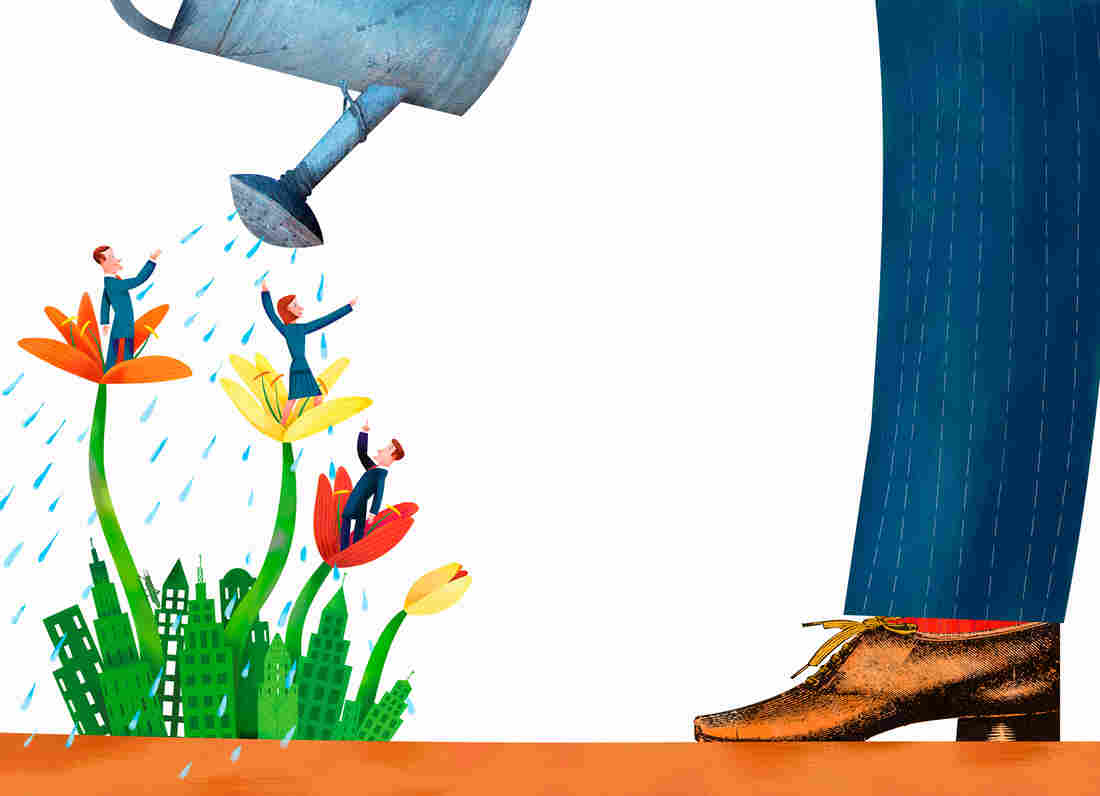 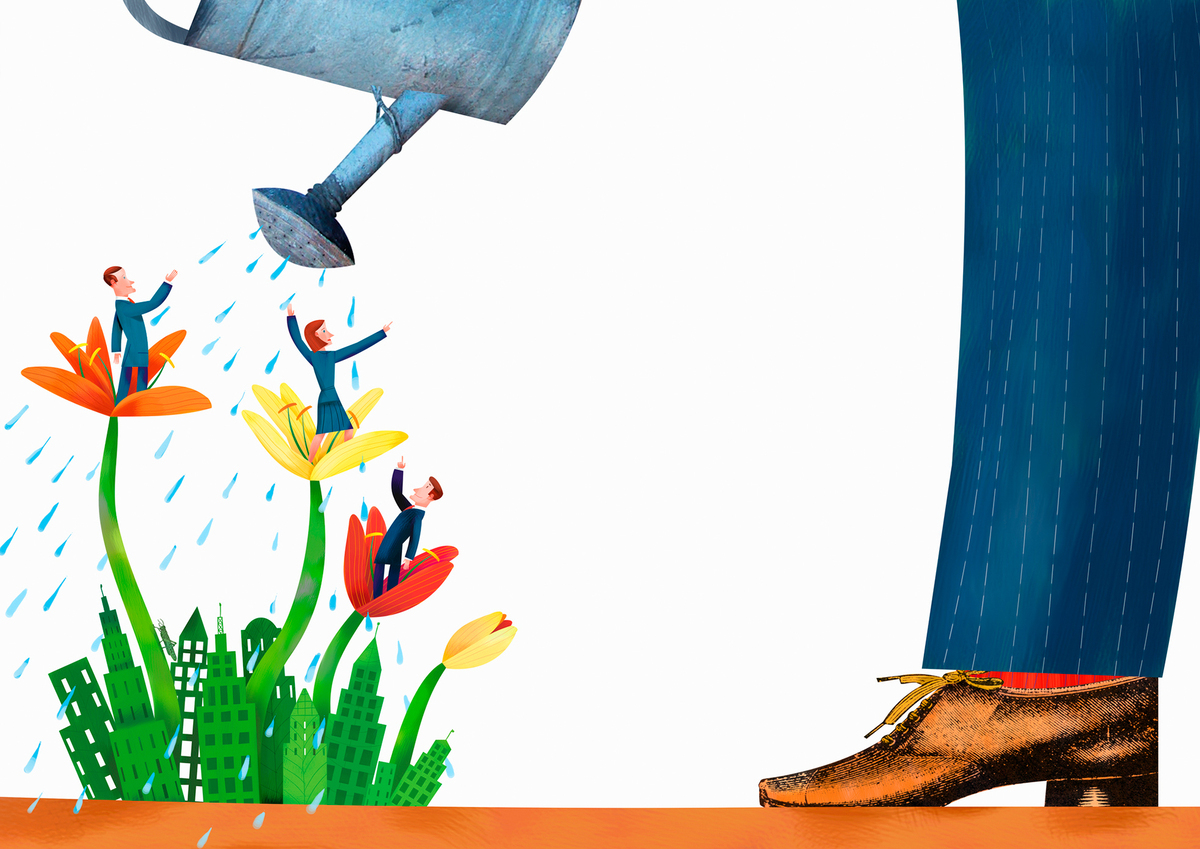 The shrinking unemployment rate has been a healthy turn of events for people with job-based insurance.

Eager to attract good help in a tight labor market — and unsure of the future of the Affordable Care Act — large employers are newly committed to maintaining health coverage for workers and often for their families, too, according to new research and interviews with business analysts.

Two recent surveys of large employers — one released last week by the consulting firm Willis Towers Watson and the other out Tuesday from the National Business Group on Health — suggest companies are continuing to try to control costs, while backing away from shrinking or dropping health benefits for their workers. NBGH is a coalition of large employers.

"The extent of uncertainty in Washington has made people reluctant to make changes to their benefit programs without knowing what's happening," says Julie Stone, a senior benefits consultant with Willis Towers Watson. "They're taking a wait-and-see attitude."

That's a marked change from three years ago, when many big employers — those with 1,000 employees or more — contemplated ending medical benefits and shifting workers to the Affordable Care Act's marketplaces.

In 2014, only 25 percent of big companies said they were "very confident" they would have a job-based health plan for their employees in 10 years, according to the Willis Towers Watson survey.

But problems with marketplace plans — including fewer offerings, rising premiums and shrinking medical networks — have made employers think twice, the analysts say.

Another big reason to maintain rich coverage is "the strength of the economy," says Paul Fronstin, director of health research at the Employee Benefit Research Institute, an industry group. "Employers are doing what they have to do to get the right workers."

Unemployment has fallen from 9.9 percent when Obamacare became law in 2010 to 4.3 percent last month, which equaled a 16-year low reached in May.

With such a steep decline, Fronstin adds, "employers are thinking, 'We need to offer this benefit for recruitment and retention.' "

Other research shows that companies are even rethinking the long-standing expedient of shifting a portion of their rising medical costs to employees; they're rethinking high-deductible plans and their tendency to make workers shoulder an increasing share of the health insurance premium.

"Employers are beginning to recognize that cost sharing has its limits," says a June report from PwC, a multinational professional services network. Low unemployment and competition for workers mean "employers have less appetite for scaling back benefits and continuing with a plan design that has proven largely unpopular."

At Fidelity Investments, a Boston-based financial firm with more than 45,000 employees, workers' required contribution to their health plans have grown to about 30 percent of total health costs.

Jennifer Hanson, the company's benefits chief who sits on NBGH's board, doesn't see that continuing.

As costs grow, "if you continue to shift more of a bigger number to employees, health care becomes unaffordable," she says. "As employers, we really do need to pay attention less to who's paying for what and more to how much everything costs."

More than half of Americans with job-based insurance face deductibles (out-of-pocket costs for medical care they generally pay before insurance kicks in) of more than $1,000 for single-person coverage. Family deductibles can be much higher.

Health costs for employers are continuing to rise, but not at the double-digit clip seen for many plans sold to individuals and families through the ACA marketplaces.

Employers expect health costs to increase 5.5 percent next year, up from 4.6 percent in 2017, according to the Willis Towers Watson report.

Companies in the NBGH survey predict health costs will rise 5 percent next year, up from an average 4.1 percent increase for 2016.

That's still far faster than inflation (which is less than 3 percent) and overall wage growth.

By many accounts, soaring costs for specialty pharmaceuticals used to treat cancer, rheumatoid arthritis, hemophilia and other complex conditions are the biggest factor behind the continued increase in health spending.

"These are very expensive drugs," says Brian Marcotte, NBGH's CEO. "They cost thousands or tens of thousands per treatment."

Often these drugs require infusion into the blood in a hospital setting, which also can drive up their price tag.

For instance, hospital-based infusions have been found to cost as much as seven times more than those performed in, say, a doctor's office.

The NBGH survey found big employers are also offering more on-site nurses and doctors in the workplace; setting up accountable care organizations that include incentives for doctors and hospitals to control costs; and are striking deals with particular hospitals for high-cost surgeries, such as organ transplants and joint replacements.

Job-based insurance covers some 160 million people younger than 65, according to Census and Labor Department data — far more than the 10 million or so insured by plans sold through ACA marketplaces.

Government employers and companies with at least 500 workers, which historically have been more likely to offer health benefits than smaller employers, cover more than 90 million employees and dependents.