Accessibility links
Research Lags On Effectiveness Of Exercises To Fix 'Mummy Tummy' : Shots - Health News NPR listeners had lots of questions after our story about diastasis recti, a medical condition of abdominal muscles that's common among new moms. Many wanted to know more about how to fix the problem.

Getting To The Core Of Exercises Said To Strengthen 'Mum Tum'

Getting To The Core Of Exercises Said To Strengthen 'Mum Tum' 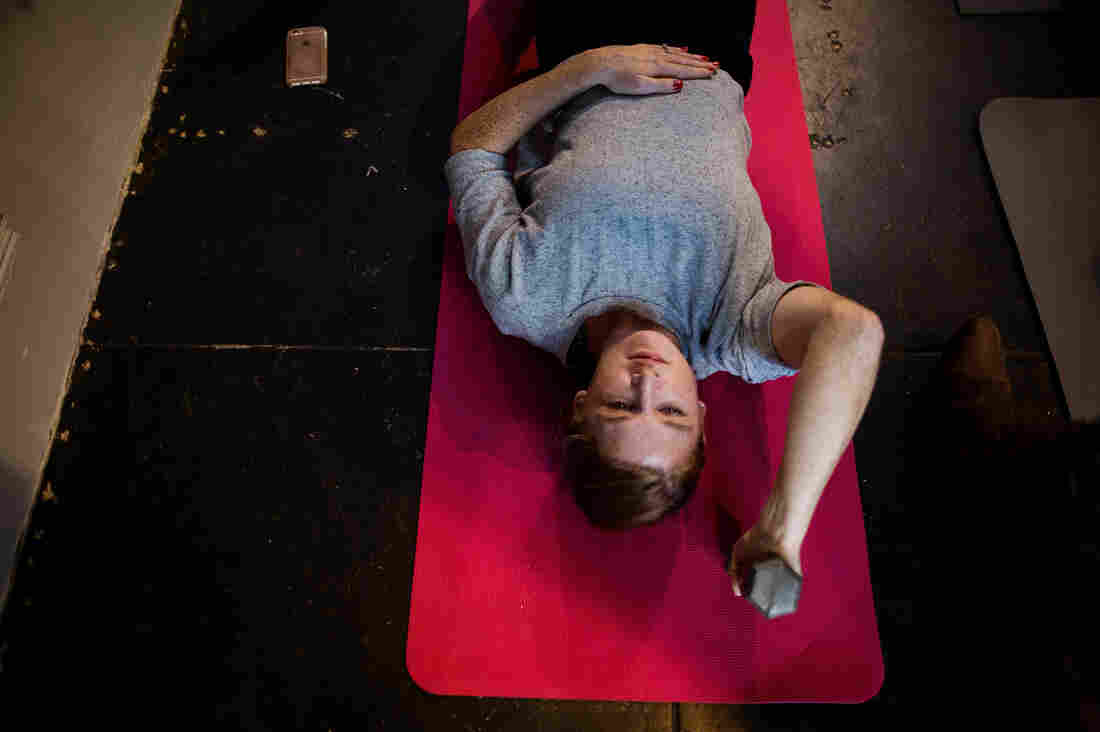 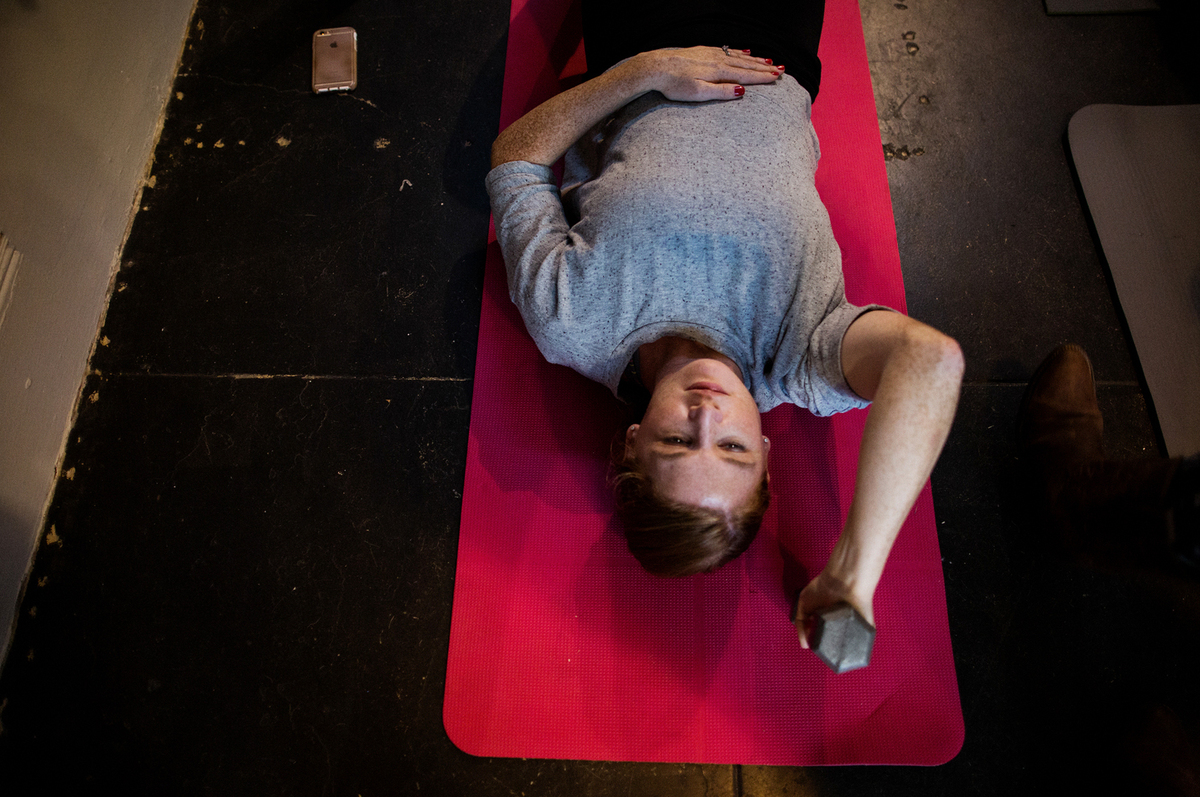 Last week, NPR had a story that garnered a huge response from listeners and Shots readers.

The story was on a medical condition that causes a soft, bulging belly, sometimes referred to as "mommy pooch" or "mummy tummy," because it's especially common among women in the months after they give birth. The technical term is diastasis recti, a condition thought to contribute to some cases of back pain among men as well as women.

After the story aired, we received hundreds of comments on Facebook and via email — many appreciative, but some angry.

A few readers say even covering the topic is beneath NPR's journalistic standards. Others say our story didn't take the topic seriously enough, or that it focused on the wrong aspects of the problem.

"I found the headlines used to introduce your story (both on air and in print) to be focused on size and shape, and therefore they reinforce damaging cultural standards about women's bodies," writes Hannah Thornton, a registered dietitian in Austin, Texas, in an email to NPR.

"Every time we raise an issue like this, it's an opportunity to change the conversation about women's bodies to make it about function rather than aesthetics," she adds.

In general, though, most readers and listeners have been excited about the potential to strengthen their abdominal muscles and fix their "pooch." They've asked for more information — more about diastasis recti, more about exercises that could help, and more about postnatal care in general. So we're back with answers to some of the questions raised:

Tell me more about which exercises can help diastasis recti

The exercise is often called "drawing in" — as in drawing in a breath and some of the muscles involved. And physical therapists have been recommending it in various forms to women for years, as a safe way to strengthen abdominal muscles and the lower back.

How To Do The "Drawing In" Exercise

You can do the exercise in many different positions — sitting cross-legged, sitting on your knees, standing with knees gently bent or on all fours. The key, practitioners say, is to be sure your back is flat.

The exercise is simple. You can do it in four steps.

Fitness instructor Leah Keller recommends doing the exercises for a total of 10 minutes each day. "You can change position every two minutes or so," she says, moving from sitting cross-legged to standing or onto all fours. "If you can devote 10 minutes to your core each day," Keller says, "you will be amazed at how quickly you see changes."

"The abdominal tissue is resilient — you can heal it quickly," says personal trainer Courtney Wykoff. She founded the fitness company Momma Strong in Houston, and aims to help women strengthen muscles weakened during pregnancy.

Wykoff includes a similar exercise to the one we profiled last week in her own postpartum regime. But she recommends doing another exercise simultaneously with the "drawing in:" a Kegel.

Kegel exercises help strengthen the muscles around your bladder and rectum. Collectively known as the pelvic floor, these muscles can become weak and damaged during pregnancy and delivery.

To do a Kegel, you make the same motion you do when you stop the flow of urine, Wykoff says. "What you're actually doing is squeezing the sphincter," she adds.

"So, as your draw the belly back to the spine, add the Kegel," Wykoff recommends. "This integrates the abdominal muscles with those of the pelvic floor. Our muscles work together like an orchestra," she adds. "It's not enough to focus on just one set of muscles."

The American Physical Therapy Association is also wary of focusing exclusively on one set of muscles.

"Postpartum rehabilitation is a multi-muscle, integrative process, not as simple as the 'One muscle/one exercise' approach proposed in the story," Sharon Dunn and Patricia Wolfe of the APTA write in an email to NPR.

The "Drawing In" Exercise: An Alternative Position

What exercises should I avoid?

Physical therapists and trainers tell Shots that some exercises can exacerbate diastasis recti if performed incorrectly.

In general, if the belly bulges out during any exercise, it can push those underlying abdominal muscles farther apart and worsen the diastasis recti, says physical therapist Kari Bo at the Norwegian School of Sports Science.

"I tell women to look at their tummies while exercising," Bo says. "If it's not protruding out, then the exercise is safe."

Another way to check is to put your hand on your belly while performing a particular exercise, such as a Pilates move or yoga position that involves core muscles. Then be sure you can hold your belly flat throughout the whole exercise.

That said, new moms shouldn't be afraid to exercise and get back into shape if they have diastasis recti, the APTA's Dunn and Wolfe write in their email.

In our original story, fitness instructor Leah Keller told readers to avoid crossover crunches or bicycle crunches. But Dunn and Wolfe disagree with that advice, and instead suggest better training on how to perform the exercises correctly.

"If done properly, the crossover crunches and bicycle crunches could actually help a woman restore the strength to all of her abdominal muscles," they tell Shots.

Is there such a thing as "man pooch?"

"Absolutely. Diastasis recti can occur in both men and women," says Dr. Raul Artal, an OB-GYN at St. Louis University.

"For men, the most common condition is related to obesity," he says. "About 40 percent of the general population is overweight or obese."

In her work as a fitness instructor, Keller has also seen the problem in very fit men who have induced abdominal separation by doing exercises that bulge the belly forward.

The same exercises that help postpartum women will help men, she says.

What's the evidence that exercise will work?

Unfortunately, there hasn't been much research that looks at how effective any particular exercise is — or is not — in fixing diastasis recti. And the studies that have been done have been small or otherwise far from definitive.

A review published in June found only six studies on the topic, and only two of them were randomized-control trials — the gold standard in medical experiments. With so little data, it's tough to draw conclusions, the review's physician-authors report in the journal Surgical Endoscopy.

"Physiotherapy can achieve a moderate reduction in IRD [inter-rectus distance] during muscle contraction," the review's authors conclude, "though it is currently unclear if this has any positive effect on quality-of-life or functional outcomes." 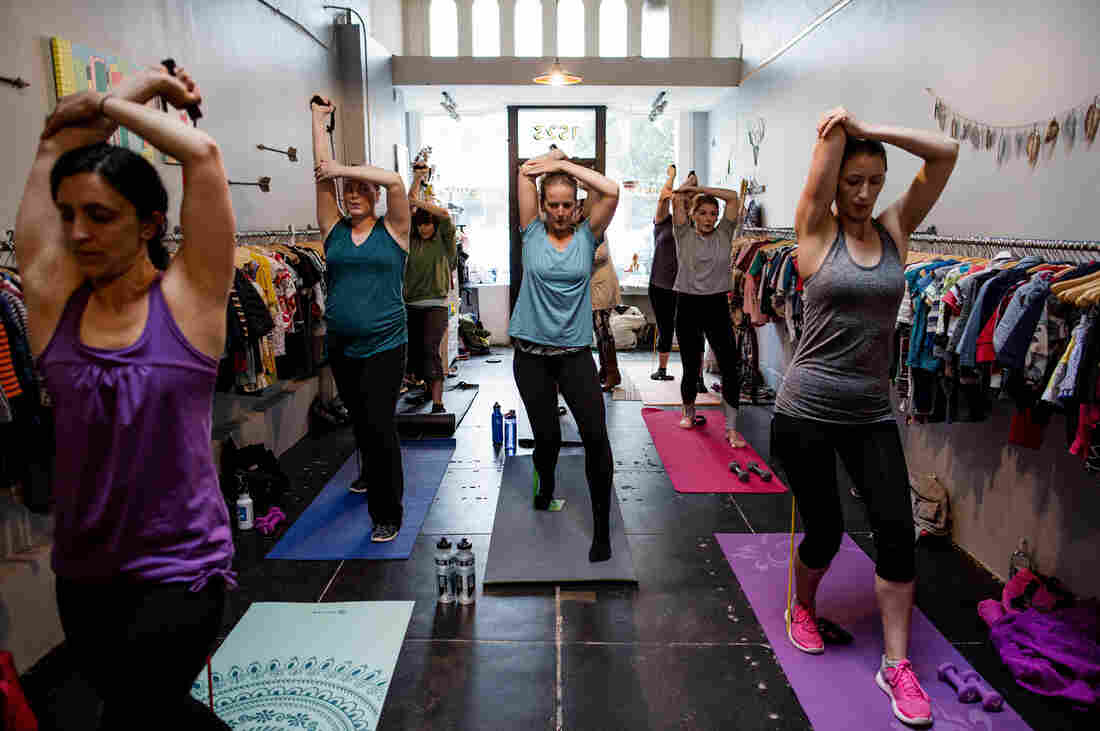 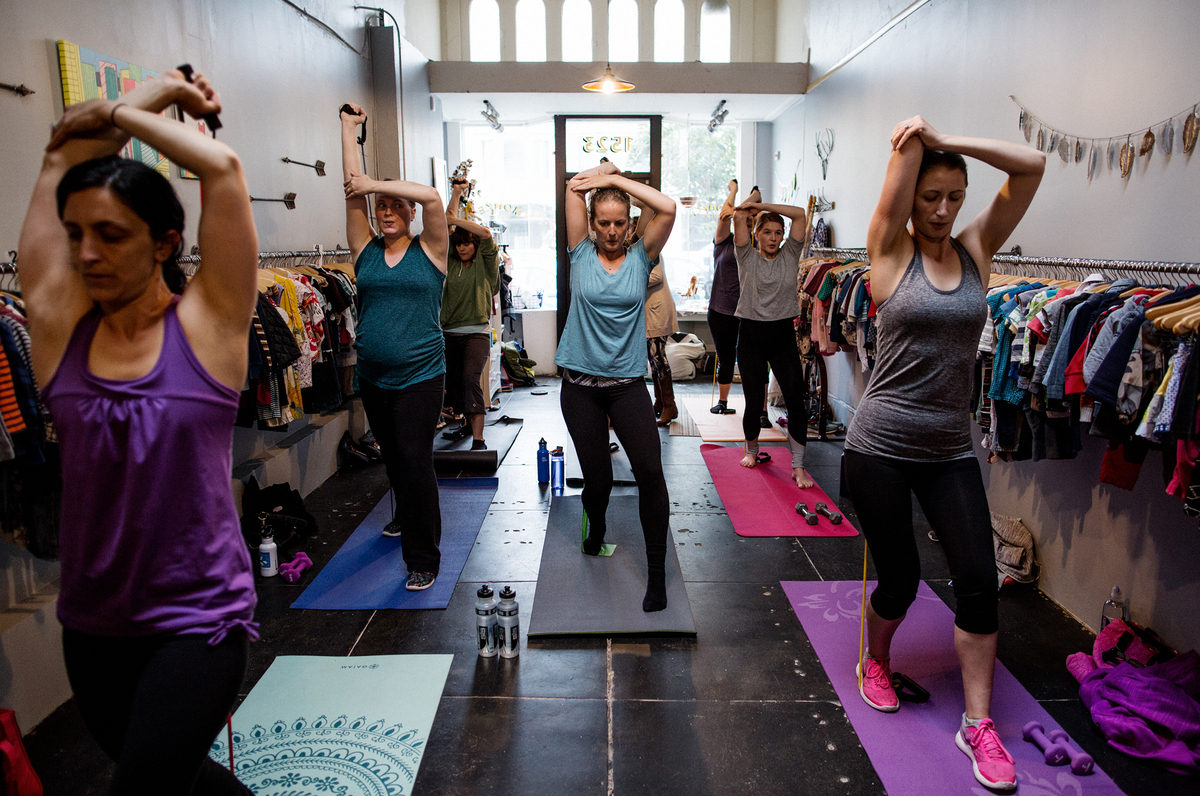 Students are taught a number of exercises in Keller's class aimed at new moms in San Francisco, Calif.

While they wait for definitive evidence, many physical therapists and personal trainers have written in to tell Shots they've seen many women improve their "pooches" and disastis recti with simple exercises. They're frustrated that scientists haven't yet caught up and done more research.

"It's amazing," Bo says. "So many women have a problem with diastasis recti and there have been so few studies," she says. "If it had been a men's problem, it probably would have been more researched."

Instead, she says, too many doctors dismiss postnatal problems as "something that 'just happens after pregnancy,' and [say] there's nothing you can do about it."

Bo thinks the "breath-in" exercise can strengthen abdominal muscles and help flatten that area. But whether the exercise will actually fix the diastasis recti, she says, is still unknown.

"That's the scientific question," Bo says. "That's what I want to find out."

To get the best answer, she says, scientists would need to actually measure the spread of these underlying abdominal muscles, via ultrasound.

She and a few other researchers have just started using ultrasound to take images in the lab of women's abdominal tissue during various exercises and compare them to images taken at rest.

So far, the findings have been inconclusive. And the data from these studies shouldn't yet be used to recommend a particular exercise routine, she warns, because the studies done so far haven't looked at the effect of doing the exercises regularly for a period of days or weeks. The researchers just analyzed what happens to the muscles during a single episode of the exercise, performed in the lab.

"It's the very early stage of research in this area," Bo says. "We need to keep an open mind and keep studying it."

Are there surgical treatments for diastasis recti?

There are several surgical procedures aimed at fixing diastasis recti. But these are invasive procedures, and also not yet well studied.

"Published literature on surgical treatments for rectus diastasis is of low scientific and methodological quality," authors of the recent review in Surgical Endoscopy conclude.

Overall the recurrence rate seems to be low after the surgery, the reviewers note. But very little is known, they says, about "postoperative pain, cosmetic outcome, and functional results" of these procedures.