Accessibility links
How Can You Tell If You Have Eye Damage From The Eclipse? : Shots - Health News If you heeded all the warnings, you're likely fine. But spots or blurred vision that shows up 12 hours later or the next day might be a sign that the sun's direct rays permanently hurt the retina.

How To Tell If Watching The Eclipse Damaged Your Eyes

How To Tell If Watching The Eclipse Damaged Your Eyes 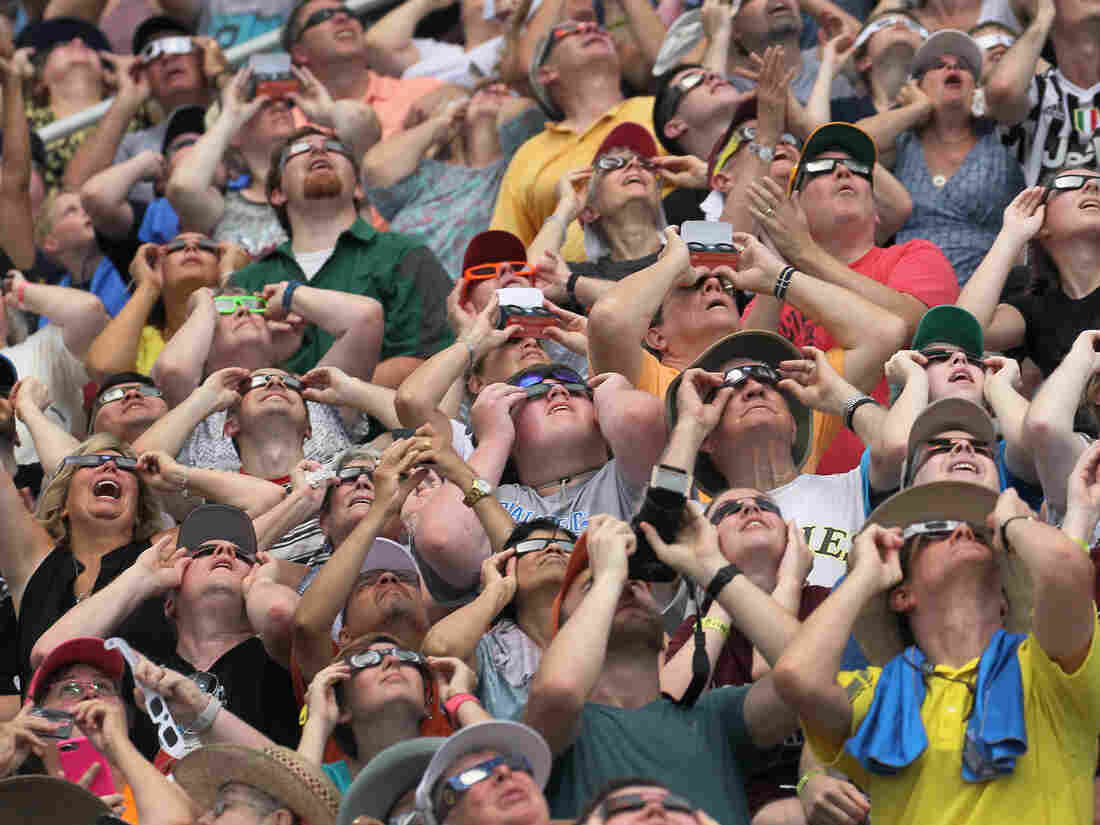 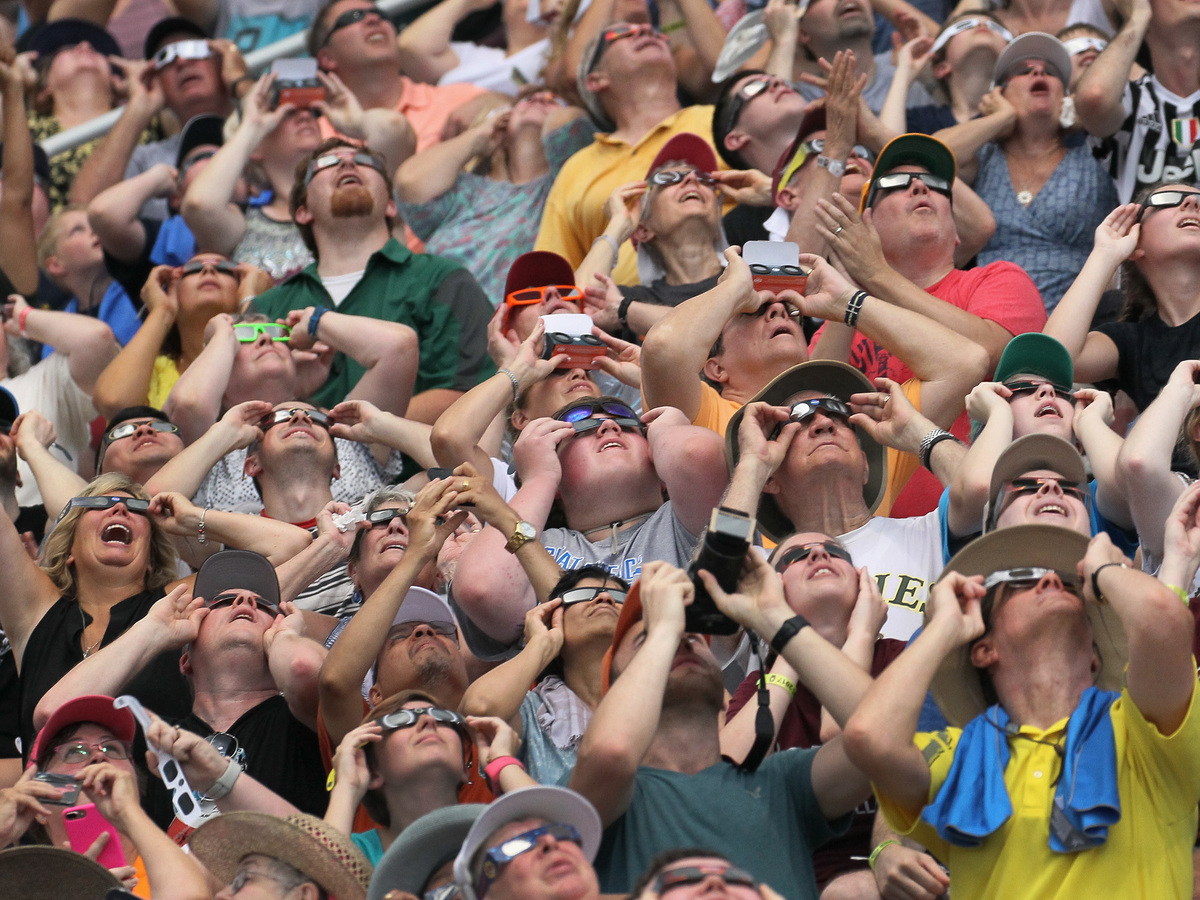 Crowds gathered to watch the solar eclipse at Saluki Stadium on the campus of Southern Illinois University in Carbondale, Ill.

Less than an hour after the Great American Eclipse completed its coast-to-coast show on Monday, people's fascination with the sun and the moon quickly turned to concern about their eyes.

We're hoping all you Shots readers heeded our words of caution and wore eclipse glasses or enjoyed the show indirectly.

But if you did steal unprotected glances skyward, and especially if your eyes felt funny or hurt a little afterward, you might be wondering how you'll know if you've done any long-term damage.

To answer that question, we once again turned to Ralph Chou, a professor emeritus of optometry and vision science at the University of Waterloo, in Ontario, Canada, and a leading authority on the damage the sun's rays can do to the eye's retina.

How would somebody know if they've done any damage?

It takes at least 12 hours before we can tell if anything has happened. The thing is, if people just saw the sun briefly without a protective filter — just a fraction of a second — the chances they've hurt themselves are very low.

If they looked at the display of a camera or a smartphone but didn't look through the optics at the sun, they're in no danger. While it may look bright, it isn't all that bright by comparison. They were not getting direct optical radiation from the sun in that case. It's just a duplicate of whatever the sensors see, and there's no danger in that.

If, for some reason, they forgot to use their filters entirely — well, [permanent damage is] always a possibility, but I would hope that after all the publicity, that that didn't happen.

What might someone's symptoms be if they didn't use any filters and looked at the sun?

It wouldn't be until 12 hours later that they would even notice their vision was changing. It might not be until [the next] morning when they wake up and realize that they can't see that well.

[The symptoms would be] blurred vision, where the very center of the vision might have a spot, or multiple spots, that were missing in their vision — that were very, very blurred. Around it, there might be some clear spots. It really depends on exactly what happened, and what kind of injury there is at the back of the eye. [As Chou told us earlier, this kind of vision loss can get better over several months to a year. But about half the time, it's permanent.]

What should someone do if they're worried there could be damage? Should they stay indoors or wear sunglasses?

The damage, if any, would not be mitigated by staying indoors or wearing sunglasses, but these are ways to make vision more comfortable as the individual recovers.

I used an eclipse viewer that came from a reputable seller. But even after looking at the sun for a few seconds through that, I felt like my eyes felt weird and needed time to adjust.

The thing is, if you look for a sustained period through the filter, you're stimulating only one set of color-sensitive receptors at the back of the eye. So they'll get more work than, say, the receptors that are responsible for green and blue light. And the result will be that for a brief time, you'll suffer the same kind of after-image effects that you get from looking at a very bright headlight or flash from a camera.

You'll recall how you'll have spots in your vision that are sort of the opposite effect of what you normally see. That kind of thing will happen if you look at the sun for an extended period of time. It'll feel a bit weird as your eyes recover from that. It doesn't mean you've hurt yourself. It's just that you've overloaded some of the photo receptors, and it takes a while to get back to full function. In most cases, it's going to be just a few minutes. There's no lasting damage from that. You would have to be staring at an extremely bright image for minutes at a time before you started to get any clinically significant damage.

So what did you think about the eclipse?

For me, this was Total Eclipse No. 19. It was an extremely good eclipse. We had really beautifully clear sky [in Salem, Ore.]. It was just a beautiful sight. So, wow. It was great.