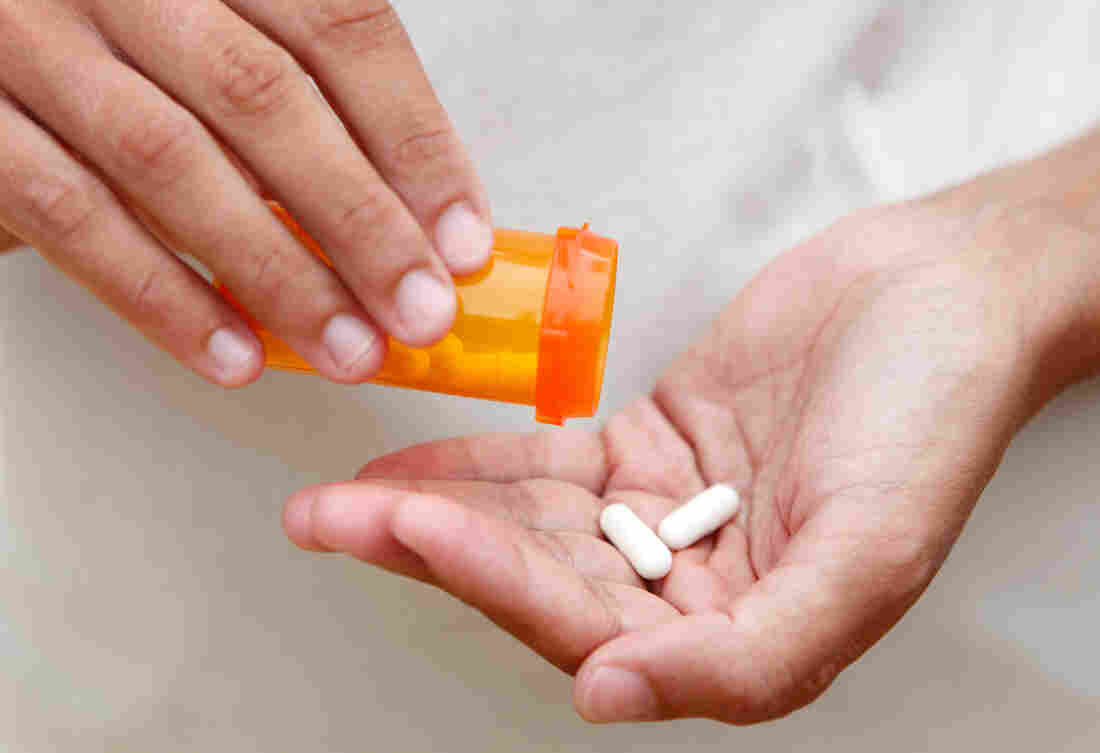 About 50 percent of patients don't take their medicine as prescribed, research shows. And those mistakes are thought to result in at least 100,000 preventable deaths each year. amphotora/Getty Images hide caption 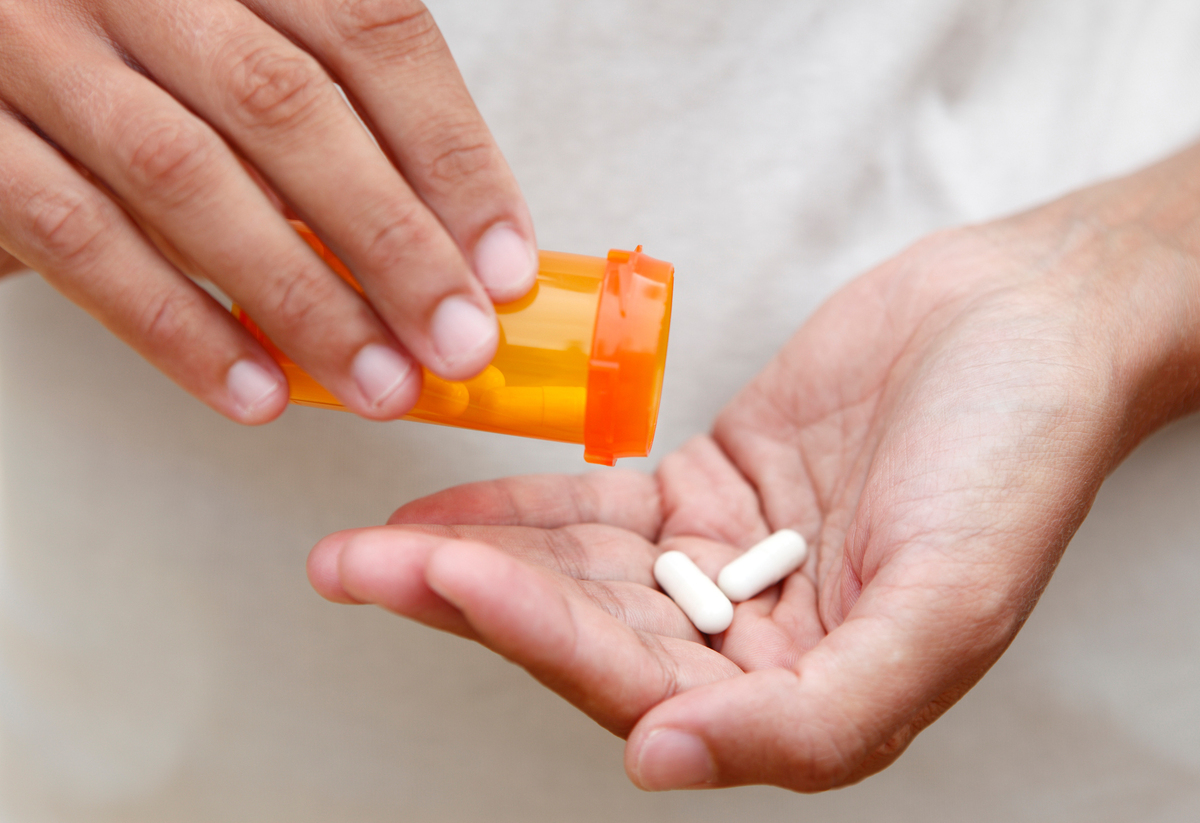 About 50 percent of patients don't take their medicine as prescribed, research shows. And those mistakes are thought to result in at least 100,000 preventable deaths each year.

Editor's note Aug. 23: This page has been updated to correct and clarify some things reported about AdhereTech. Scroll down to the "corrections" box at the bottom of this page for details about what has been changed.

What if I told you there was a way to use technology to save an estimated $100 billion to $300 billion dollars a year in health care spending in the U.S.? That's the estimated cost incurred because people don't take the medications they're prescribed.

A number of companies are now selling wireless "smart" pill bottles, Internet-linked devices aimed at reminding people to take their pills. But recent research suggests that actually changing that behavior may take more than an electronic nudge.

Forgot To Take Your Medicine Today? D'oh! You're Not Alone

All agree it's a worthy goal. Dr. Niteesh Choudhry, an internist at Harvard Medical School, describes the problem of not taking medication as "the final cascade of all of science."

Researchers work years, sometimes decades, he says, to develop highly effective drugs, get them approved by the FDA and into the hands of doctors who then study when to prescribe them to sick people. But for the drugs to work, they have to be taken.

And up to half the time, they're not taken as prescribed, Choudhry says. The result is at least 100,000 preventable deaths each year.

When you ask patients why they don't take their medicine they usually say they forgot, Choudhry says. So he recently set out to test some simple reminder devices. 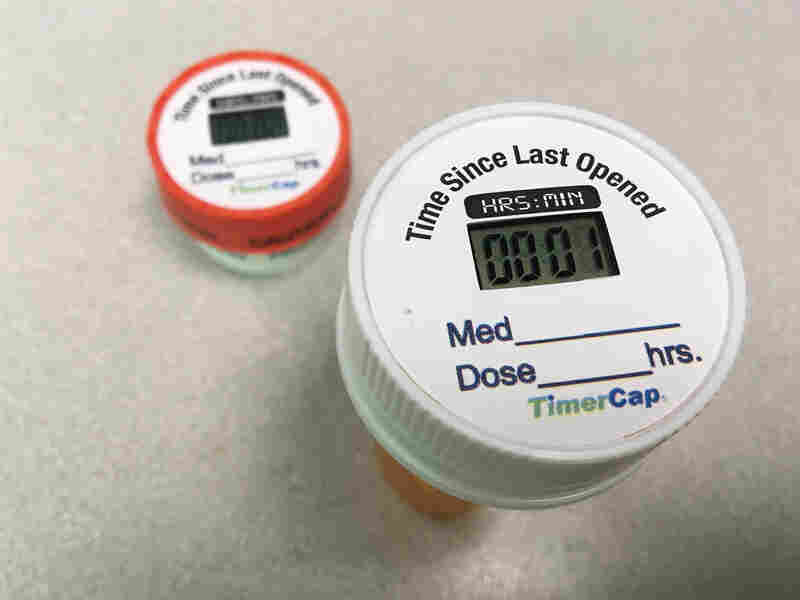 Keeping track of how long it's been since your last pill might be easier with a "TimerCap" on the bottle. But people who used the cap as part of a research study weren't any better at taking their medicine as prescribed. Lauren Silverman/KERA hide caption 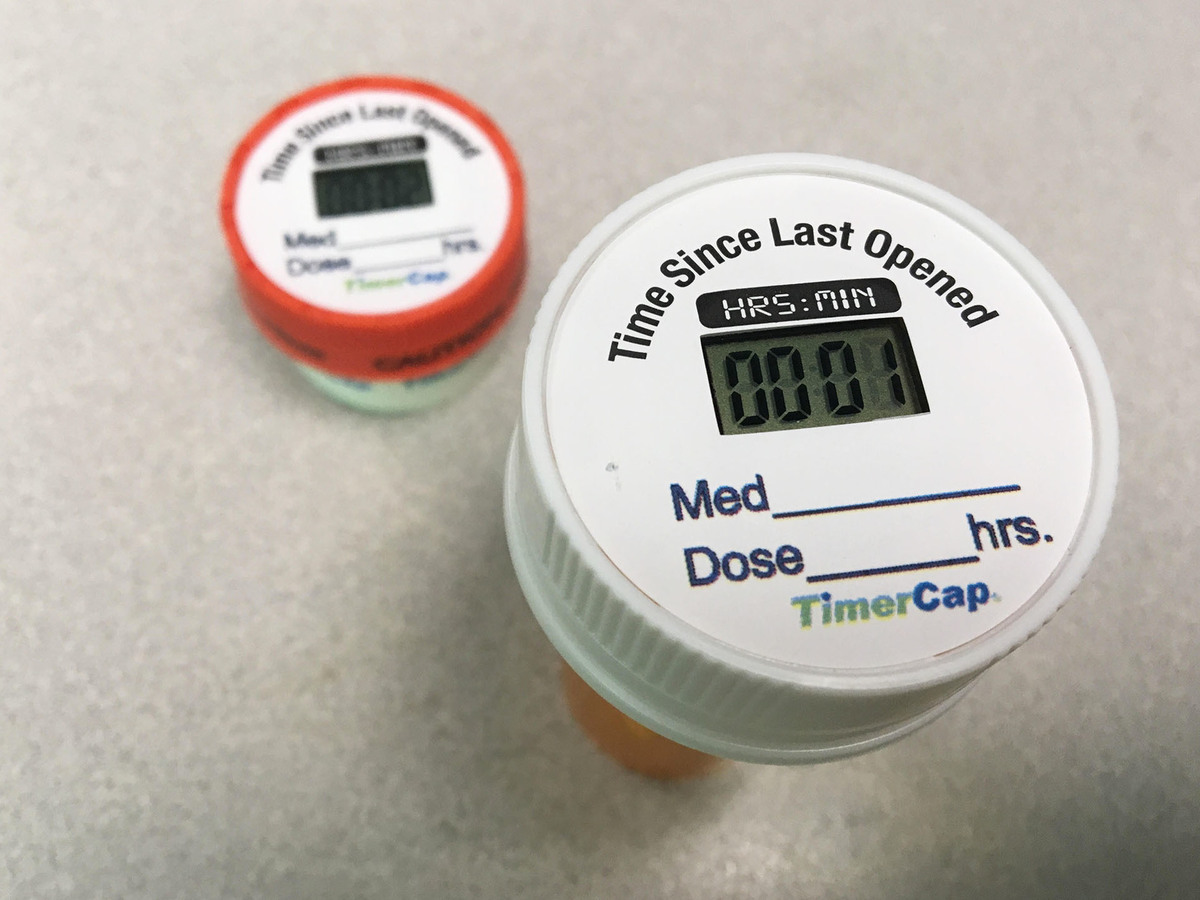 Keeping track of how long it's been since your last pill might be easier with a "TimerCap" on the bottle. But people who used the cap as part of a research study weren't any better at taking their medicine as prescribed.

He enrolled 50,000 patients who were taking daily cardiovascular medications or antidepressants in a randomized trial and gave them one of three tools: a pill bottle with toggles to mark whether they'd taken their medication that day; a standard, daily pillbox (with a compartment or compartments for each day); or a digital cap that functions like a stopwatch. It starts counting each time you open it so you can see how long it's been since you last took a pill.

Choudhry expected a slight improvement in pill-taking among those who used the bottle with the digital cap.

"Unfortunately we found no effect whatsoever," he says, in comparison to adults who used a regular pillbox.

Why not? One of the possible explanations, Choudhry says, is that the device's reminder wasn't powerful enough.

Enter the army of "smart" pill bottles. More than a dozen companies have developed Internet-connected bottles and caps that can send email and text message reminders to take pills, or even alert a caregiver if, say, an elderly parent forgets to take medication. Some such bottles are for sale online — others are being handed out by pharmacists. 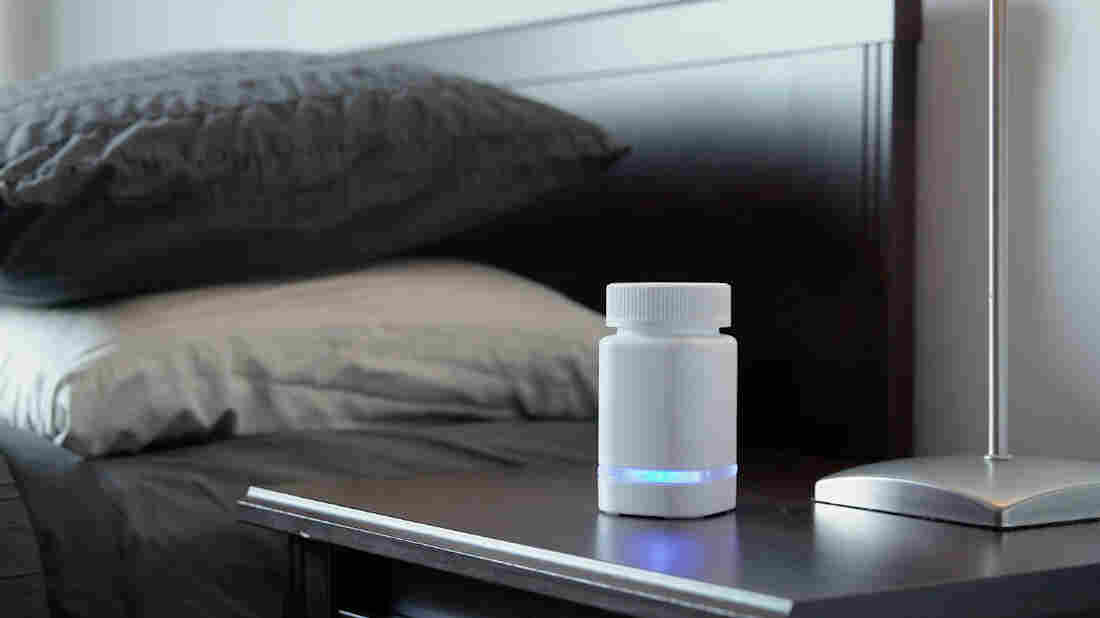 An Adhere Tech "smart" pill bottle emits a blue glow when it's time to take a pill and also signals if you've missed a dose. Adhere Tech hide caption 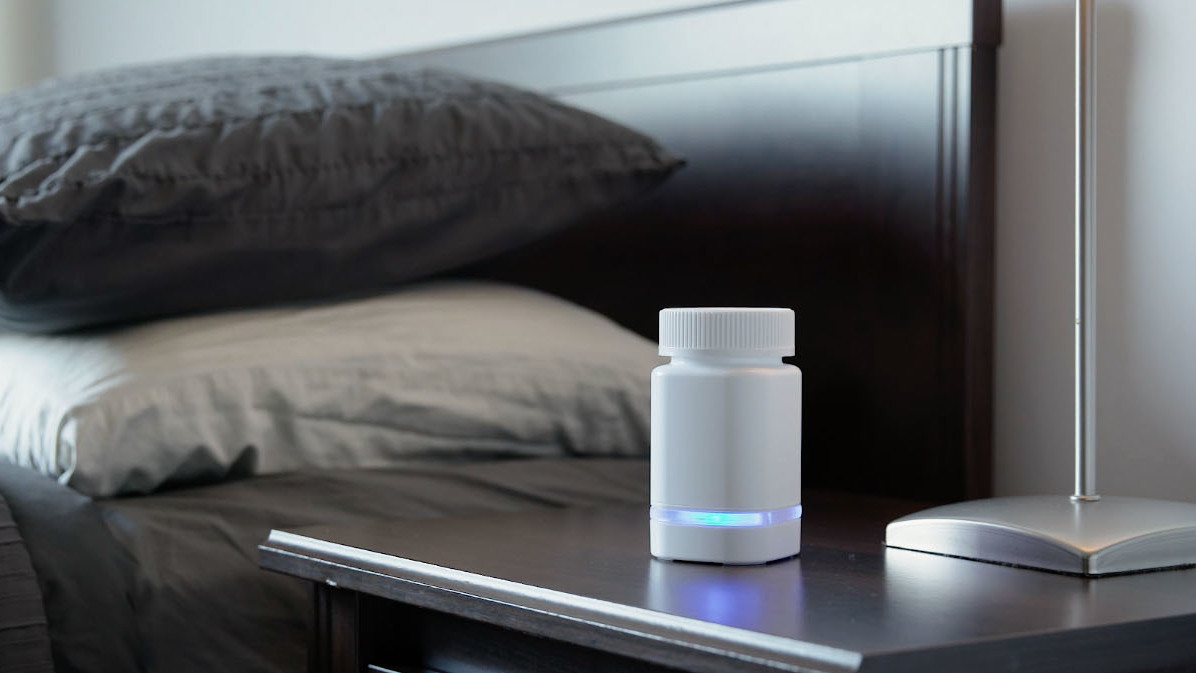 An Adhere Tech "smart" pill bottle emits a blue glow when it's time to take a pill and also signals if you've missed a dose.

Thousands of patients, including some with cancer, HIV and rheumatoid arthritis are turning to a sleek, white, Internet-connected pill bottle made by AdhereTech, says the firm's CEO, Josh Stein. He describes his company's wireless device as the iPhone of pill bottles.

"Our system is automatically getting data sent from each and every bottle 24/7," Stein says.

Sensors in the bottle detect when the cap is twisted off and how much medication is removed. When it's time to take a pill, a blue reminder light pulses. Miss a dose? A chime goes off, and then the patient or a caregiver can get a phone call or text message.

"Other devices will require patients to set up a device, or download apps and integrate everything," Stein says. "We work with an average patient population that's 70 years old. A lot of those patients don't have Bluetooth or Wi-Fi, so we need something that works right out of the box."

Just how well do these fancier pill bottles work? Stein says his company's data suggest AdhereTech was able to increase patients' adherence to their medication regimen by an average of 24 percent.

Dr. Kevin Volpp, a physician and health economist who directs the University of Pennsylvania's Center for Health Incentives, studied more than 1,000 patients with heart failure who were each given the GlowCap pill bottle, an Internet-linked device made by firm Vitality. In addition to the high-tech pill bottles, the people in the study received a cash reward if they took their medicine on time and were given the option of having the bottle alert someone if they skipped a dose.

"The expectation was that we would see a large increase in medication adherence — and that would then translate into a significant reduction in hospital readmissions and lower health care costs," Volpp says.

But that's not what happened.

Even with the glowing pill bottle, the cash and the alert, many people didn't take their meds.

Let's recap here: We've looked at two large studies of pill bottle reminder systems. One was pretty basic and the other, higher-tech. Neither one seemed to help patients stay on top of their medication.

What's going on? Volpp says it could be a problem with the study's design, or with the devices. Or maybe, just maybe, the main problem isn't forgetfulness.

"Patients in many cases don't like taking medicines every day," Volpp points out. "It reminds them of the illness and they'd rather not be reminded of that."

Any medication can have negative side effects, and some cost a lot, he says. Using a smart pill bottle won't make the drug cheaper or get rid of nasty side effects like impotence or severe fatigue.

Still, Volpp remains optimistic about pill bottle technology — he just thinks the high-tech strategy needs to be paired with social interventions. In his study the results were better for patients who had their pill bottle automatically alert a friend if they missed a dose.

Choudhry agrees that although "reminder technology" is bound to be part of the solution — especially for people with memory issues — it won't be enough to change everyone's behavior.

When it comes to getting people to take their medications, it looks like a smart bottle is no magic pill.

A previous version of this story incorrectly stated that the AdhereTech "smart" bottle glows red if a patient has missed a dose. As AdhereTech CEO Josh Stein tells NPR, the bottle does not do that.

With respect to the distribution of AdhereTech's bottles, Stein says they are being widely distributed and marketed, mostly in the U.S., but also in countries on three other continents.

With respect to the cost of AdhereTech's bottles, AdhereTech sells them to pharmacies, hospitals and other health care providers, who also get access to real-time information about the bottles' usage. The costs vary depending on the services that customers purchase, Stein says. The bottles are not sold directly to consumers. As to their cost, an analogy was earlier made to cellphone prices and service contracts. The analogy was meant to refer to the structure of contracts, not to the actual prices of AdHere's products and services, which Stein says are far less than those for cellphones and related services.

The data that Stein cites showing AdhereTech's bottles improved patients' adherence to their medication regimen by an average 24 percent are based, he says, on information from "multiple thousands" of bottle users with different types of diseases or conditions, from different clients.

In the audio version of this report, a large-scale evaluation of different bottle technology is cited. To be clear, that evaluation did not include tests of AdhereTech's bottles.