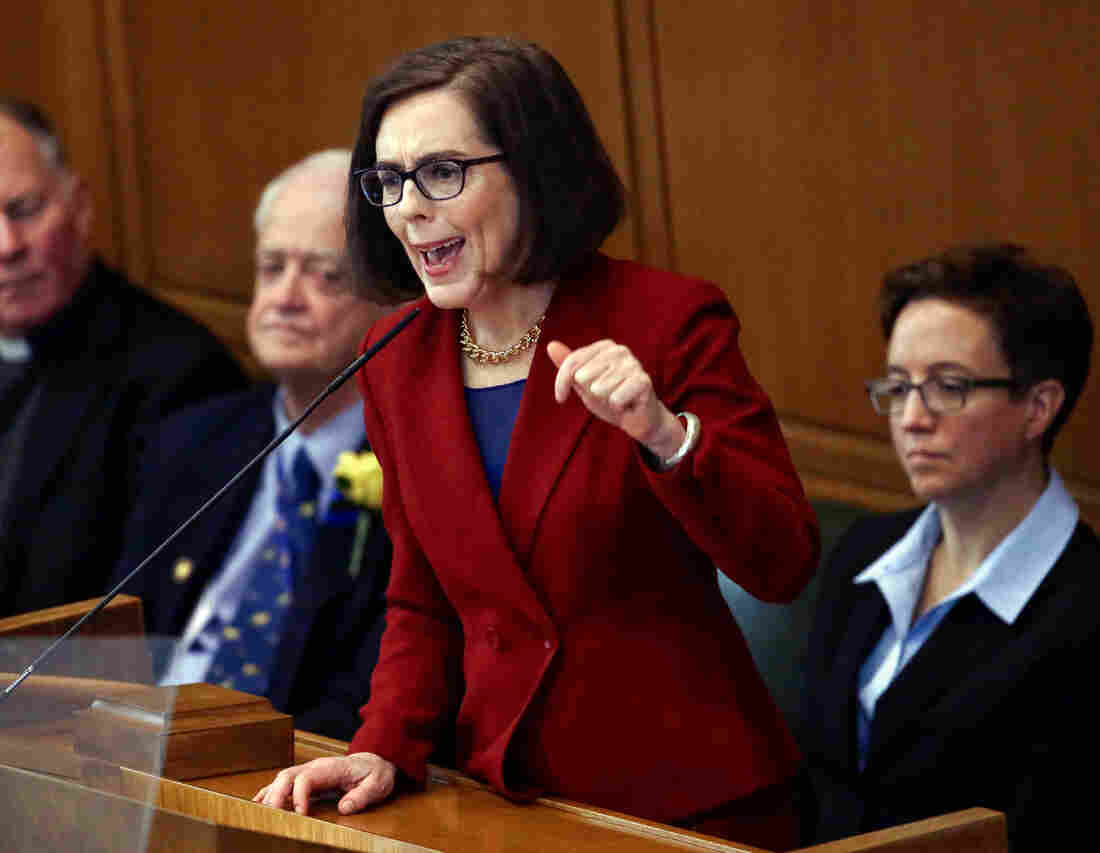 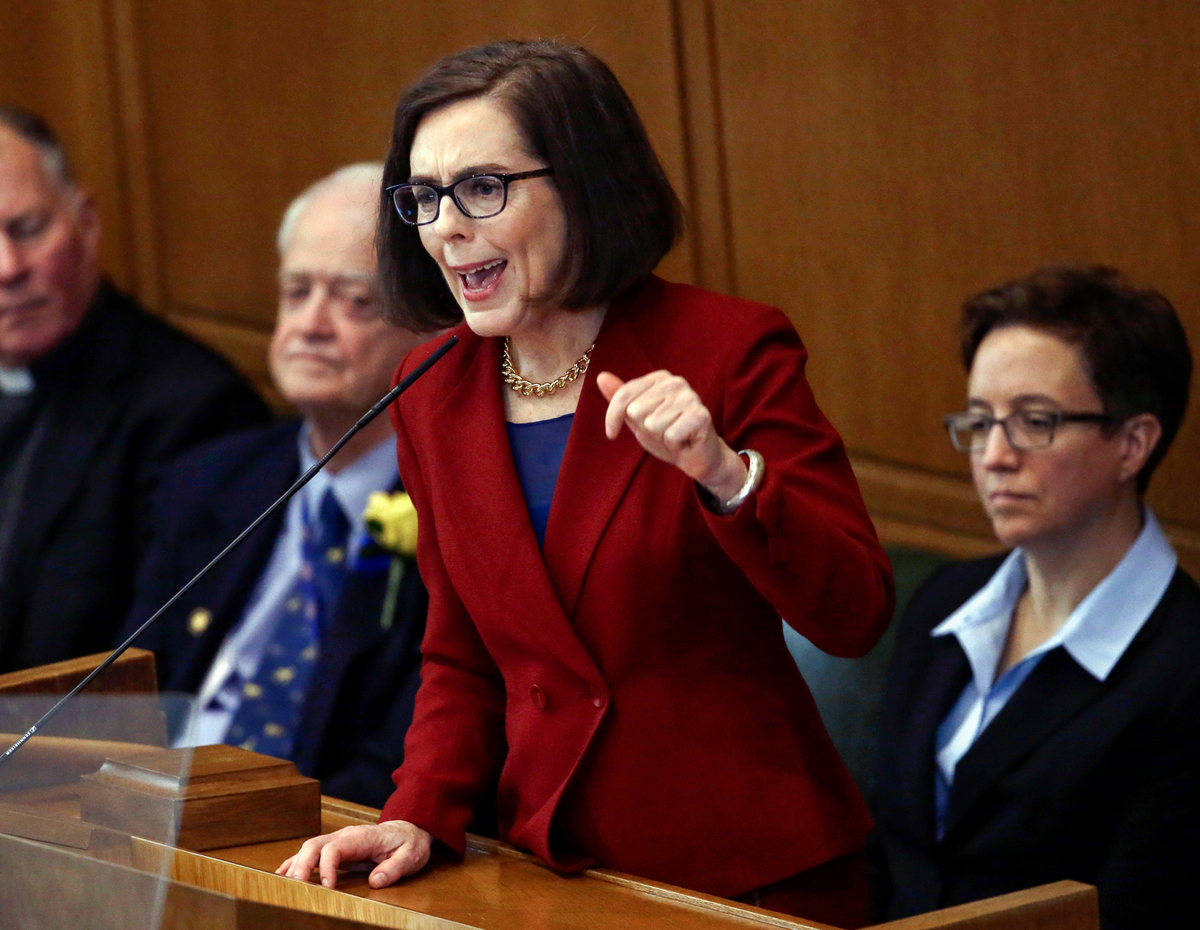 Federal health insurance rules are a moving target, and it's unclear whether Republicans will take another run at replacing the Affordable Care Act. In the meantime, some states are staking out strong positions on coverage of abortion, regardless of how the federal landscape changes.

That same day, Oregon Gov. Kate Brown, a Democrat, signed a bill requiring most health plans to cover reproductive health services, including contraceptive drugs, devices, and procedures, without charging consumers anything out-of-pocket. Abortion is one of those services.

The federal Affordable Care Act probably deserves some of the credit or blame, depending on your point of view, for the new state laws.

"The ACA raised the profile of abortion coverage in private insurance," says Adam Sonfield, a senior policy manager at the Guttmacher Institute, a reproductive health research organization that supports abortion rights. The federal law allows states to prohibit plans sold on the insurance marketplaces from covering abortion, and 25 states subsequently moved to restrict or prohibit it.

"Many states passed those laws pretty quickly" after 2010 when the ACA was passed, Sonfield says, "and other states took it further," banning or restricting abortion coverage in other private individual and group insurance plans. Ten states prohibit all private insurance plans from offering abortion coverage. Like Texas' new law, in eight of those states, the only exception is to save a woman's life. No allowances are made for rape, incest, or fetal impairment.

"Taking the life of a pre-born child, that doesn't change, whether it's a case of rape or incest," says John Seago, legislative director of Texas Right to Life, which supports the law. He points out that the law does allow women to buy supplemental insurance for abortion.

In Kansas, a state that has a similar law, Blue Cross Blue Shield of Kansas offers a supplemental abortion policy for group plans — but not individual plans — that costs roughly $80 per member annually, says spokeswoman Mary Beth Chambers.

But abortion rights advocates say that with few exceptions, these riders for abortion coverage simply aren't available. They liken the situation to the problems women faced getting maternity coverage before the ACA passed. Back then, individual policies generally did not cover maternity expenses, so women who didn't get coverage through work had to buy a rider to cover those costs. Often, though, they weren't offered by insurers or were prohibitively expensive.

The ACA requires maternity coverage in all individual and small-group plans. Still, an analysis by the National Women's Law Center found that only 7 percent of individual plans offered maternity riders in 2012.

And while women may have been able to plan ahead to purchase coverage for a pregnancy, "no one wants to think they're going to need an abortion this year," Sonfield says. "It's not something you want to plan for."

"In other years, this could have been a can that could be kicked down the road," says Grayson Dempsey, executive director of Naral Pro-Choice Oregon, whose organization was part of a coalition of advocacy groups that worked on the law. "Instead, now there was a real urgency to get it done."

The Trump administration is expected to release a revised rule within days that will roll back ACA provisions requiring most employers and insurers to cover contraceptives without passing on costs to consumers. The rule is expected to allow any organization that has religious or moral objections to covering birth control to stop doing so.

An opponent of the Oregon law says it will probably lead to more abortions. "When you make something free, it's potentially accessed more," says Liberty Pike, communications director at Oregon Right to Life. Pike says her organization fears that young women would use abortion as birth control.

The organization doesn't have a position on the other elements of the new law, Pike says.

The Oregon law does has a caveat that allows insurers to offer plans that don't cover contraceptives or provide abortions to religious employers, such as churches.

Despite all the focus on restricting abortion coverage, these states show that there's also movement in the other direction: states stepping forward to protect abortion rights, Borchelt says.

It should be noted that these state laws don't apply to the large companies that self-fund their health plans and pay their employees' claims directly rather than buy coverage from an insurer. Those plans, which cover about 61 percent of workers who get insurance through their jobs, are regulated by the federal government.