Accessibility links
'Shooting Ghosts' Chronicles War's Aftereffects In Words And Photos : Shots - Health News Marine Sgt. TJ Brennan suffered from memory loss after being injured by a grenade in Afghanistan in 2010. Finbarr O'Reilly captured the event on film. Now the two men have written a memoir. 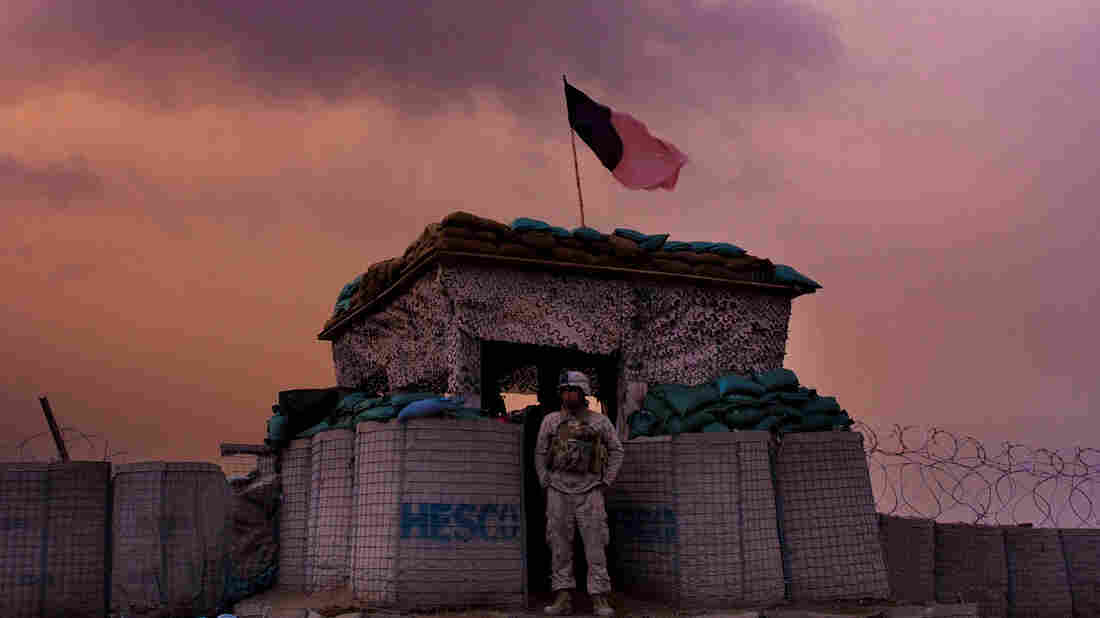 A U.S. Marine from the 1st Battalion, 8th Marines, Alpha Company looks out as an evening storm gathers above an outpost near Kunjak, in southern Afghanistan's Helmand province. Finbarr O'Reilly/Reuters/Viking hide caption 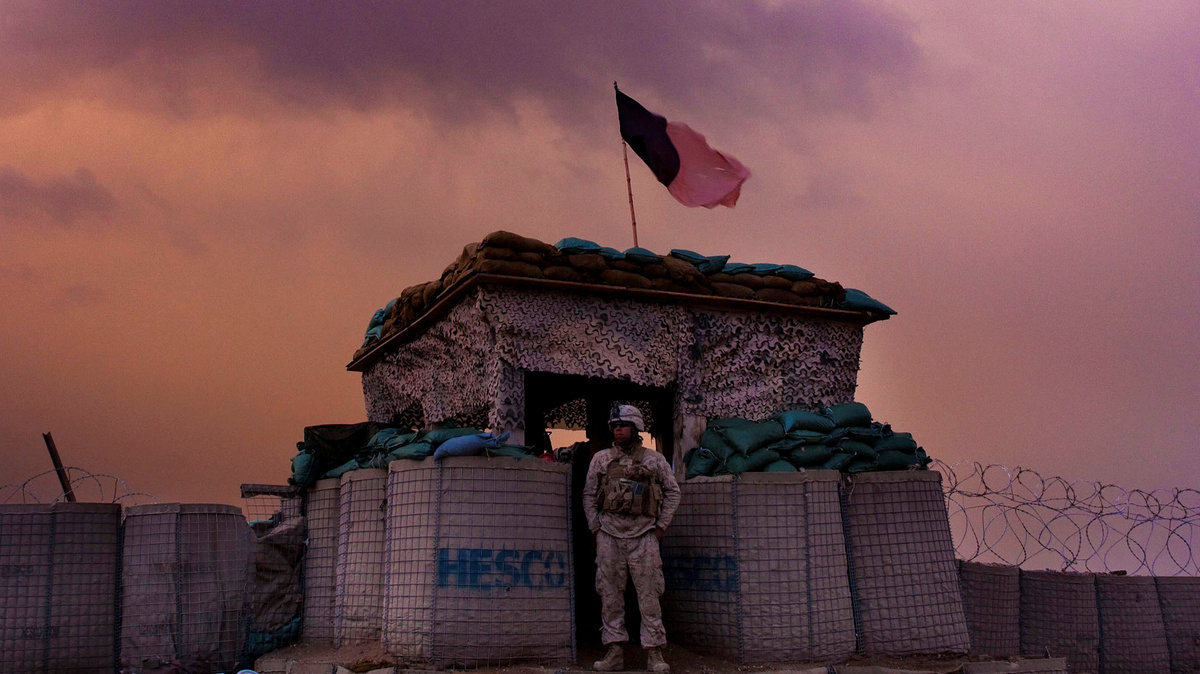 A U.S. Marine from the 1st Battalion, 8th Marines, Alpha Company looks out as an evening storm gathers above an outpost near Kunjak, in southern Afghanistan's Helmand province.

After Marine Sgt. Thomas ("TJ") Brennan was hit by the blast from a rocket-propelled grenade in Afghanistan in 2010, he suffered a traumatic brain injury that left him unable to recall much of his immediate past — including, at times, the name of his own daughter.

"When I got blown up, it erased a lot of my memories," Brennan says.

Brennan began therapies to address his TBI. He used the 200 letters he had exchanged with his wife to put together a broad narrative of his time at war. When it came to the grenade blast itself, Brennan pieced together the sequence of events surrounding his injury with the help of Finbarr O'Reilly, a photographer who had embedded with Brennan's unit in Afghanistan.

"I have the whole sequence documented of him," O'Reilly says. "One of the things I ... [photographed] was this Afghan national policeman who fired the rocket that ultimately went astray and blew up very close to TJ, knocking him unconscious ... and the explosion afterwards, and the guys who went to recover TJ."

Back in the U.S., both men struggled with the aftereffects of war. Brennan suffered from PTSD and debilitating depression, while O'Reilly grappled with the psychological toll of years spent documenting human brutality in conflict zones across the world. Together, they collaborated on a memoir, called Shooting Ghosts, about what Brennan refers to as the "invisible injuries" of war.

Finbarr O'Reilly: I think, on some level, if we're entirely honest with ourselves as photographers, yes, we do want adventure. We do seek out that thrill. The fact that that impulse matches with something that is considered a noble calling — truth-telling, or photojournalism as a profession — these are all worthy things to do, but it does draw people, such as myself, who did go in search of things that would give us a sense of purpose and meaning that was matched by our desire for adventure or for thrills. Initially at least.

When I started out I did want to have an interesting life. I did want to be in places where things were happening. I had traveled, after university, through east and Central Africa down to South Africa. And this is in 1994 — as the Rwandan genocide was beginning to happen — and then I was in South Africa when Mandela was elected. These were very intense experiences for me as a young individual, and I wanted to keep experiencing those kinds of things, and journalism seemed like the best way to do that. 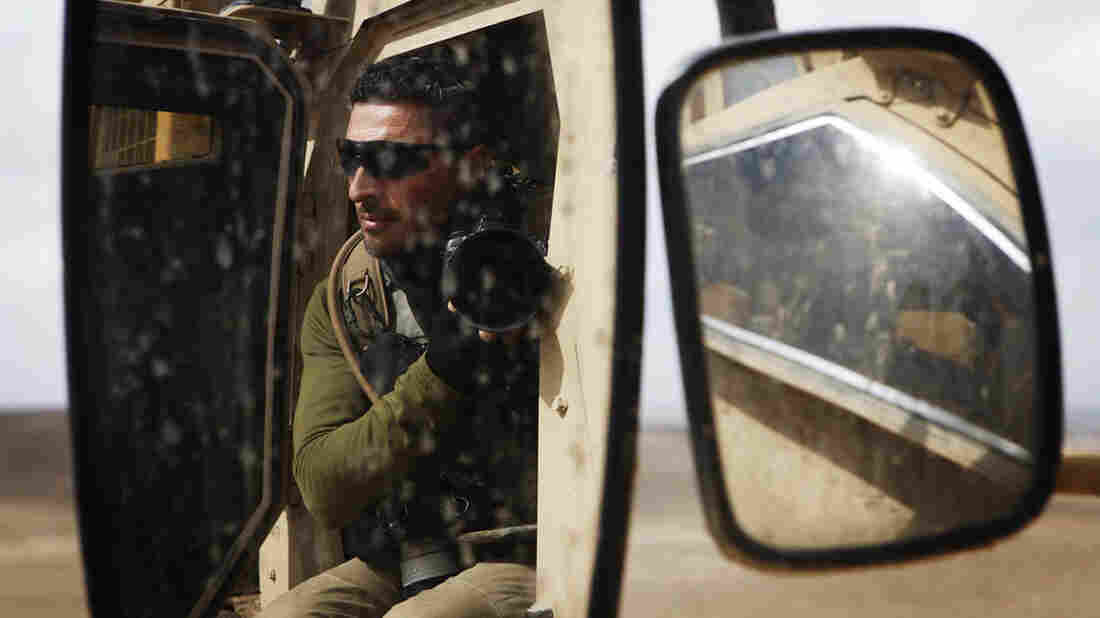 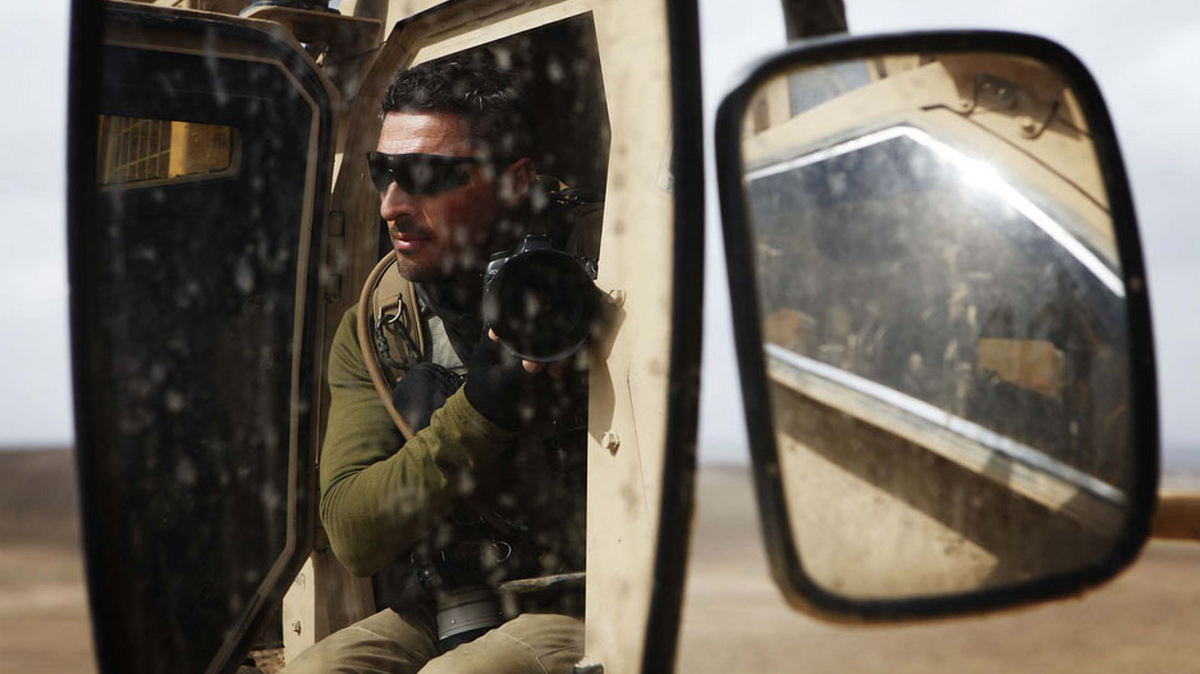 O'Reilly: My job in these situations is first of all not to get in the way of what's happening, while also trying to remain safe myself. So I was very focused on my role while these guys were focused on theirs. So I would just photograph things unfolding.

TJ Brennan: I was trying to take off my boots to take my first shower in a few months, when I first arrived at Camp Bastion [now Shorabak]. And there's something really scary about being inside your own head and telling your hands to untie your laces — and they won't listen.

You know what you're supposed to be doing. You're telling yourself what you're supposed to be doing. And your fingers are working, but something's not connecting. And the emotion and the fear that I felt in that moment and knowing that I had a difficult time recalling my own daughter's name just an hour ago at the hospital — like, that was really scary. There are times now where I have [what] I call ... "bad brain days," and that first day in the hospital was one of my first bad brain days that I had. 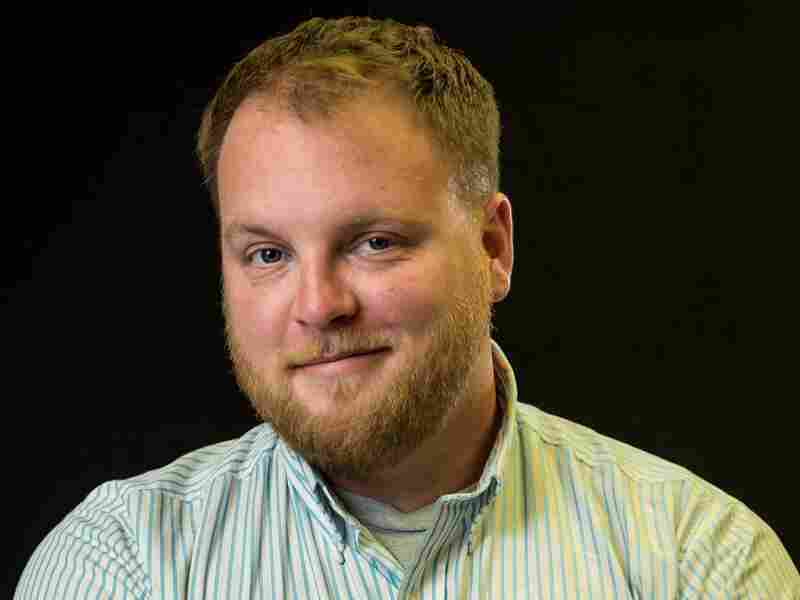 Now retired from the Marines, TJ Brennan is a regular contributor to The New York Times' At War blog. He is also the founder of The War Horse, a nonprofit online newsroom covering the effects of the wars in Iraq and Afghanistan. Cindy Shepers/Viking hide caption 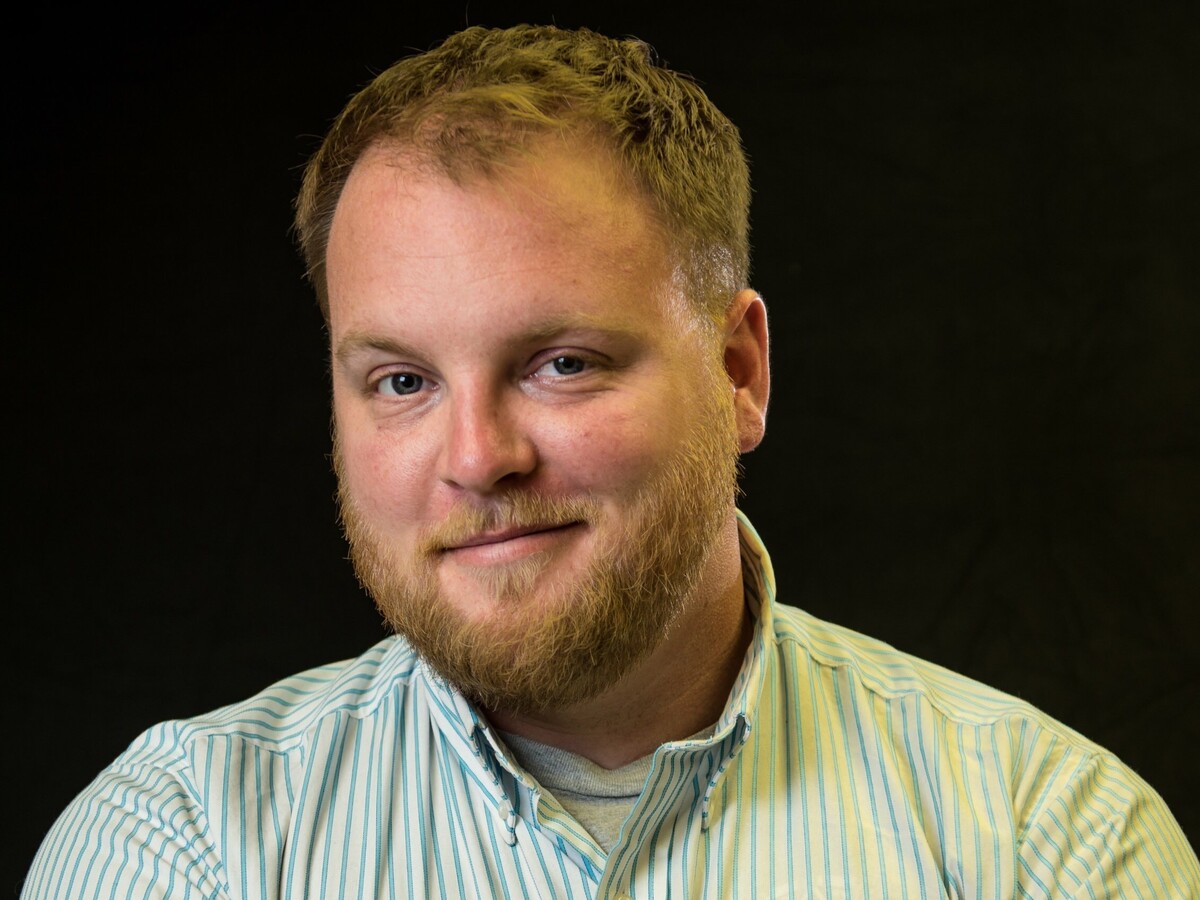 Now retired from the Marines, TJ Brennan is a regular contributor to The New York Times' At War blog. He is also the founder of The War Horse, a nonprofit online newsroom covering the effects of the wars in Iraq and Afghanistan.

Brennan: The majority of traumatic brain injuries, they leave residuals. But not everyone experiences residual symptoms of their traumatic brain injury, so I thought that I was going to be OK when I went back out to my guys. And then, when it came time to me doing [what] I call ... the basics of being a Marine infantryman — having my squad's identification numbers memorized, having their blood types memorized ... when I went back and I started doing my precombat checks and precombat inspections, I was having a hard time remembering those.

That's a real, "Oh, crap" moment, when you're responsible for 15 lives. But I didn't want to be labeled as a malingerer for saying I was having issues. Because, for me — my TBI — the symptoms manifest in a very physical way for me. But they're very invisible to a lot of people, so it's easy for people to discount invisible injuries.

On not seeking help for his trauma initially

Brennan: I ignored getting help for far too long. One of the main reasons why I wanted to write the book was because I understand how it feels to feel alone, like you're the only veteran or service member going through an issue. It feels like you're surrounded by extremely strong people who are wearing the same uniform that you are, and you don't want to let them down. And that's a lot of why I couldn't bring myself to get help. 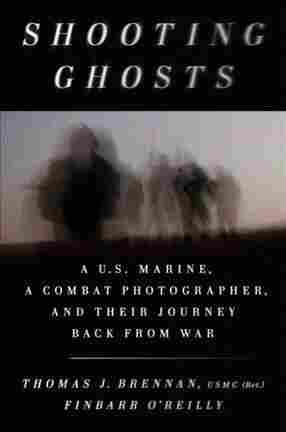 A U.S. Marine, a Combat Photographer, and Their Journey Back from War

Title
Shooting Ghosts
Subtitle
A U.S. Marine, a Combat Photographer, and Their Journey Back from War
Author
Thomas J. Brennan and Finbarr O'reilly

Brennan: There was somebody in the battalion who was bitching [about] ... pulling the PTSD "punk card." And that was a symbolic moment to me, because it was [about] the stigma toward mental health treatment in action — whether it was 100 percent directed at me or not.

I immediately [felt like I] had been labeled a piece of broken gear. ... That's probably the best thing that could have happened to me in hindsight, because I knew it was either I walk back inside and say, "I'm not getting help, and I'm going to deploy back to Afghanistan with these guys in seven months" or "I need to steel my resolve and go down the road of getting help, because I just need to accept that my career is over."

On helping another retired Marine through his writing

Brennan: What means the most to me was, after I wrote about my suicide attempt for The New York Times — I think it was 2013 — I had a Marine veteran reach out to me.

He called me on my office line while I was working at The Daily News in North Carolina. He really didn't tell me too much other than the fact that he was an Iraqi immigrant that later joined up and served as a linguist during the wars. When he came home, his family disowned him. And it had probably been about seven or 10 days after the story had published, but he told me that he Googled "painless, quick suicide" or some sort of Google search about how to kill himself painlessly and not leave a big mess for his family. And the SEO — the search engine optimization — for The New York Times story made that the first thing that popped up [in his online search]. And he called me to tell me that my story renewed his commitment to stay alive.

Lauren Krenzel and Mooj Zadie produced and edited this interview for broadcast. Bridget Bentz, Molly Seavy-Nesper and Deborah Franklin adapted it for the Web.