Accessibility links
Brain Mapping Guides Surgeons In Removal Of Musician's Tumor : Shots - Health News The surgeons tasked with removing a tumor from Dan Fabbio's brain had worked hard not to disrupt his ability to perform music. They rejoiced when he was able to play his sax on the operating table. 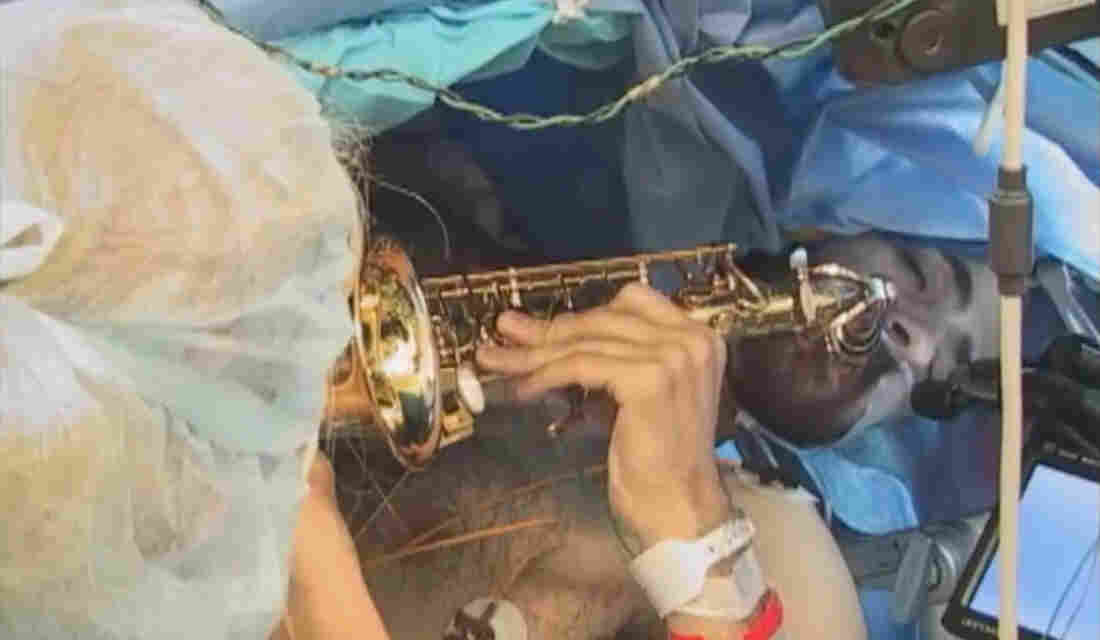 After surgeons removed a tumor from Dan Fabbio's brain, they gave him his saxophone — to see whether he'd retained his ability to play. A year after his surgery, Fabbio is back to work full time as a music teacher. YouTube/Screenshot by NPR hide caption 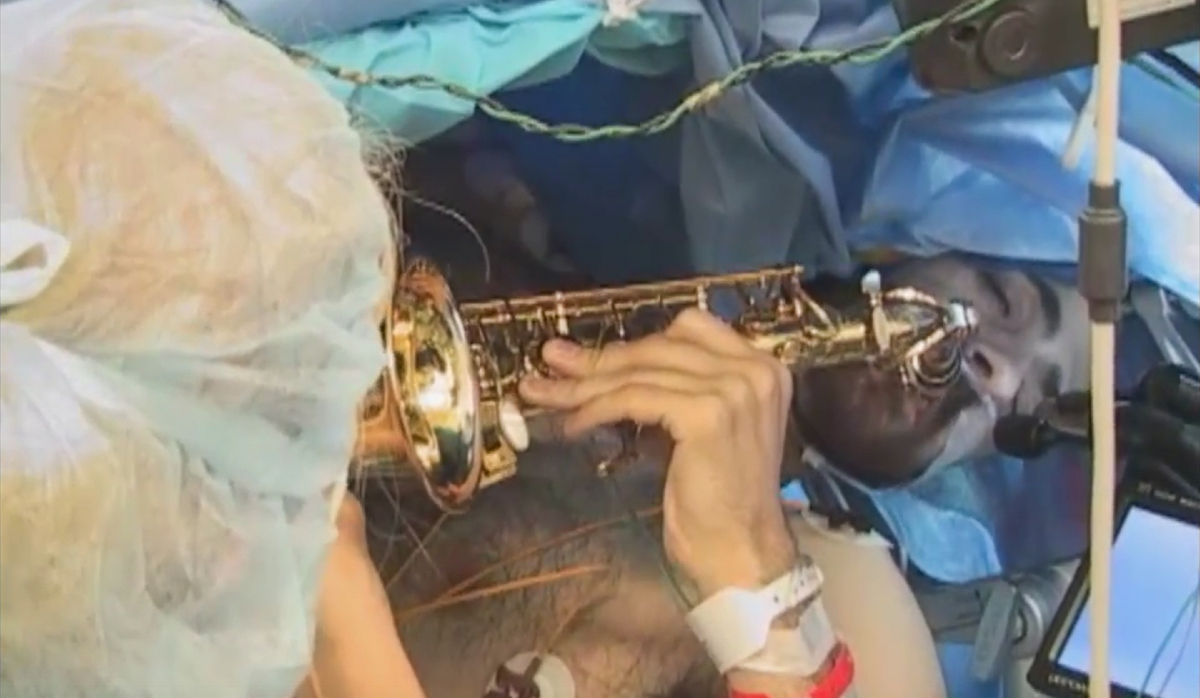 After surgeons removed a tumor from Dan Fabbio's brain, they gave him his saxophone — to see whether he'd retained his ability to play. A year after his surgery, Fabbio is back to work full time as a music teacher.

Dan Fabbio was 25 and working on a master's degree in music education when he stopped being able to hear music in stereo. Music no longer felt the same to him.

When he was diagnosed with a brain tumor, he immediately worried about cancer. Fortunately, his tumor was benign. Unfortunately, it was located in a part of the brain known to be active when people listen to and make music.

Fabbio told his surgeon that music was the most important thing is his life. It was his passion as well as his profession.

His surgeon understood. He's someone whose passion has been mapping the brain so he can help patients retain as much function as possible.

Dr. Web Pilcher, chair of the Department of Neurosurgery at the University of Rochester Medical Center, and his colleague Brad Mahon, a cognitive neuroscientist, had developed a brain mapping program. Since 2011, they've used the program to treat all kinds of patients with brain tumors: mathematicians, lawyers, a bus driver, a furniture maker. Fabbio was their first musician.

The idea behind the program is to learn as much as possible about the patient's life and the patient's brain before surgery to minimize damage to it during the procedure.

"Removing a tumor from the brain can have significant consequences depending upon its location," Pilcher says. "Both the tumor itself and the operation to remove it can damage tissue and disrupt communication between different parts of the brain."

Ahead of Fabbio's surgery, it was important to understand exactly what parts of his brain were responsible for his musical abilities. The team spent six months studying the functional and structural organization of Fabbio's brain, Mahon tells All Things Considered host Robert Siegel.

"We have a lot of experience mapping language in the left hemisphere," Mahon says. "This was the first time we sought to map music ... in the right hemisphere."

Working with Elizabeth Marvin, a professor of music theory with the University of Rochester's Eastman School of Music, Mahon came up with a series of music tests for Fabbio.

They asked him to listen to piano melodies and hum them back while he underwent functional MRI scans. In between melodies, he listened to and repeated spoken sentences. The scans allowed the researchers to pinpoint the areas of Fabbio's brain that are crucial for music and language processing. From those scans, they produced a three-dimensional map of Fabbio's brain.

That map was a guide for Pilcher and his medical team during the surgery in July 2016. Fabbio was not only awake, but he once again performed the music and language tests, this time with his brain exposed. Marvin, who was in the operating room, scored those tests in real-time, helping the surgeons identify which areas to avoid.

Once his tumor was removed, Fabbio was given his saxophone. Lying on his side, he played a song he'd prepared for that moment. Out of concern that the deep breaths required for long notes could cause his brain to protrude from his skull, Fabbio and Marvin had chosen a Korean folk song and modified it so he could use shorter, shallower breaths.

"He played it flawlessly, and when he finished, the entire operating room erupted in applause," says Marvin. "It made you want to cry."

As a musician, Fabbio had long had a remarkable talent: As he brushed his teeth with an electric toothbrush, he would hear in his head melodies that harmonized with the hum of the toothbrush. But that stopped happening when his tumor showed up.

Then one day, about a month after his brain surgery, Fabbio was brushing his teeth and suddenly, the harmonies returned.

"He realized at that point that his brain had recovered completely," Pilcher says.

Fabbio's case is described in detail in a study published Thursday in the journal Current Biology.

Justine Kenin, a producer for All Things Considered, contributed to this story.