Accessibility links
Filtering Wildfire Smoke From Classrooms Takes A Village : Shots - Health News Montana has recently pushed all their young students indoors because of the unprecedented level of smoke from wildfires. Some community groups are now collaborating to clean up that indoor air. 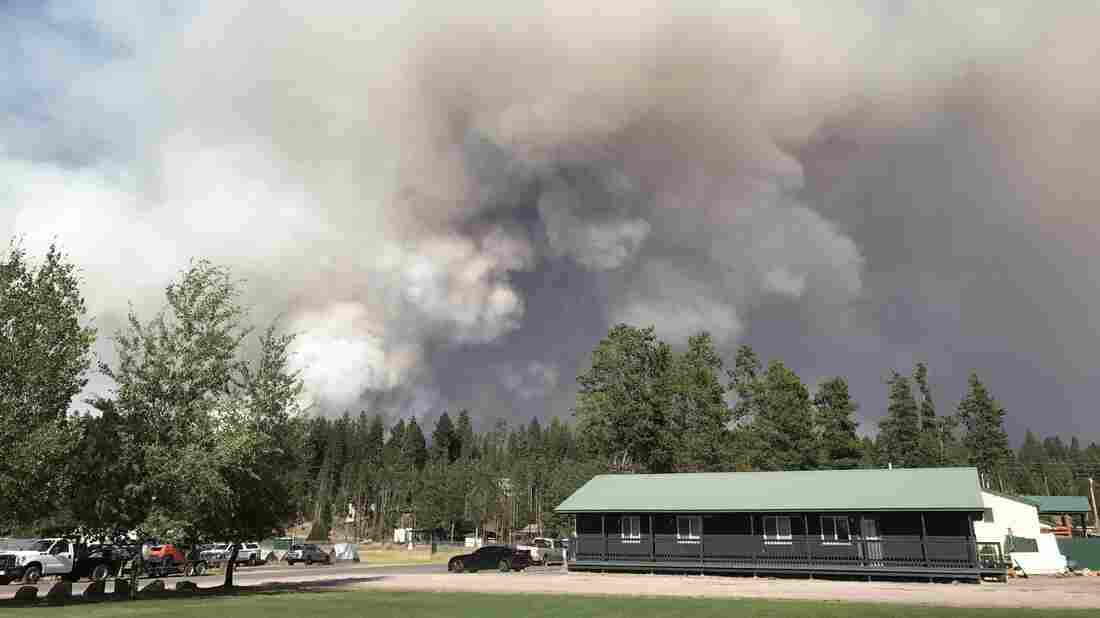 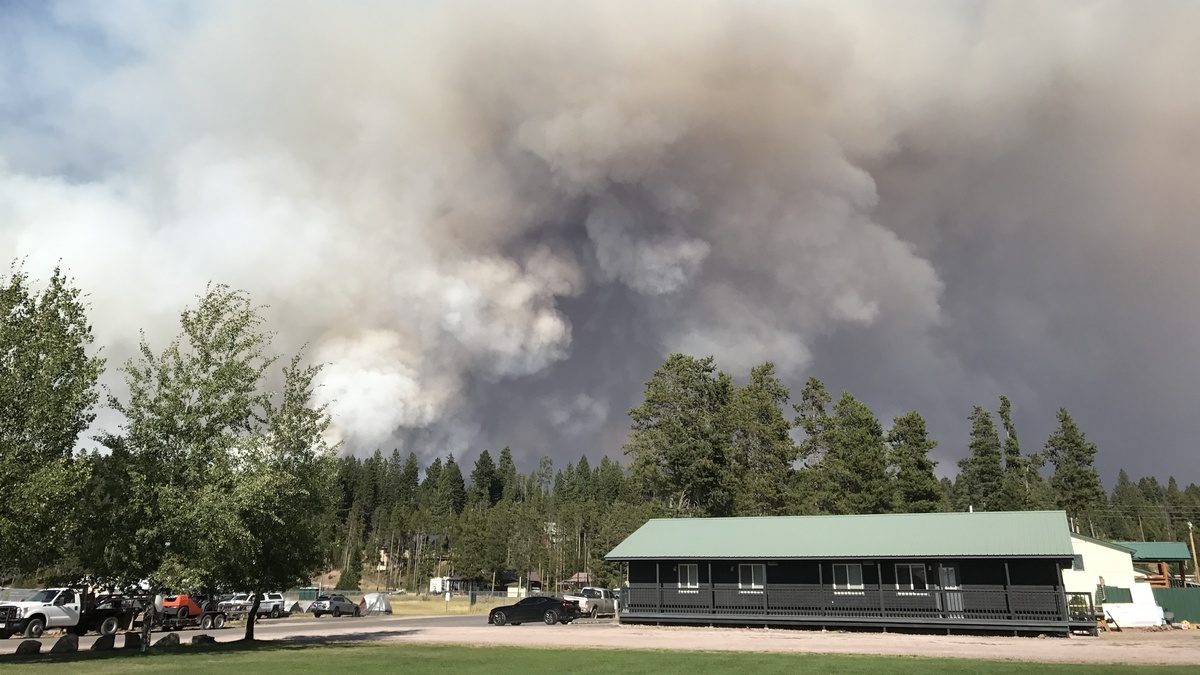 More than a million acres of Montana forests and rangeland have burned this year, so far, causing unhealthy air across the state since mid-July.

In August the Missoula County health department took the unprecedented step of advising the entire town of Seeley Lake to evacuate due to smoke; air there has been classified as "hazardous" levels for 35 days in August 1.

Now that fire season has extended into the school year, many western Montana schools have been keeping kids inside because of heavy smoke. But that doesn't mean they're breathing clean air. Some community partnerships are springing up to try to get air filters into more classrooms.

Air quality has also been poor in Frenchtown, which is on the far west side of Missoula county; Seeley Lake is on the eastern side. On a recent afternoon, recess was in full swing at Frenchtown Elementary School, and the students were all indoors. About 60 kids swarmed around the smaller gym. Bouncy balls sailed overhead and a blur of jump-ropes narrowly missed swiping limbs.

Juliana Palen-Goodsell describes the scene the way only a 9-year-old can.

"It's kind of like a lot of red ants," she says. "They're all running around, hitting people with balls. It's really crazy."

It's a little too much for Goodsell, so she opts to watch a movie instead, with more than 100 other 4th graders packed into one very warm classroom.

Smoke from wildfires raging around the region has kept Frenchtown students inside almost all week. There's no air conditioning.

Administrators have to make quick decisions throughout the school day about whether it's safe for kids to play outside. Assistant Principal Ashley Parks relies on updates from the state Department of Environmental Quality that monitor the concentrations of fine particulate matter in the air.

"Every hour we check it," Parks says. "On a day like today we don't need to check it because we know it's terrible, and we know it's going to be bad all day." 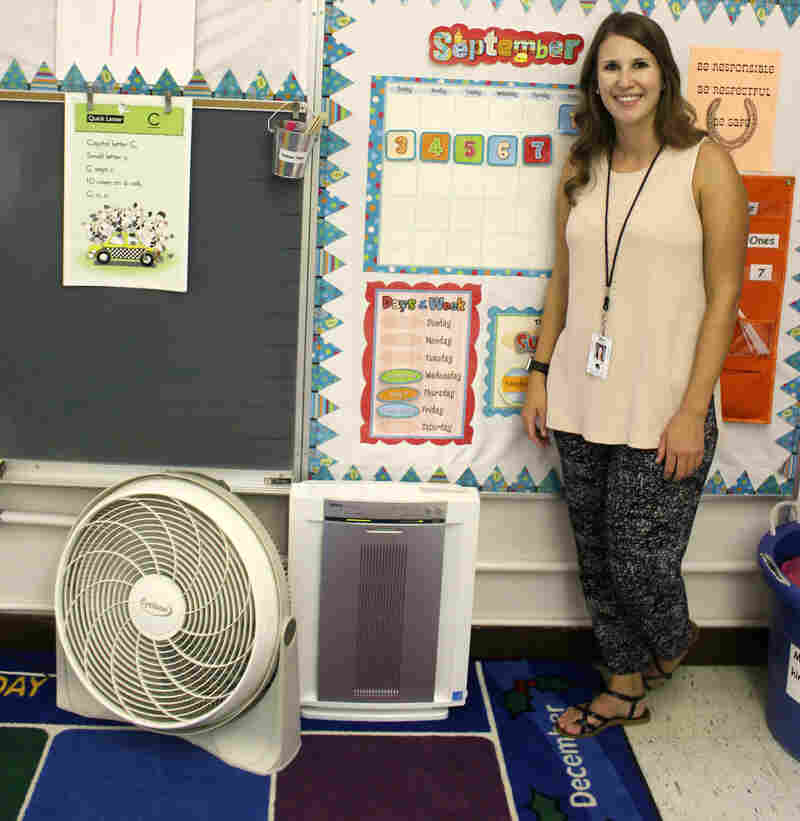 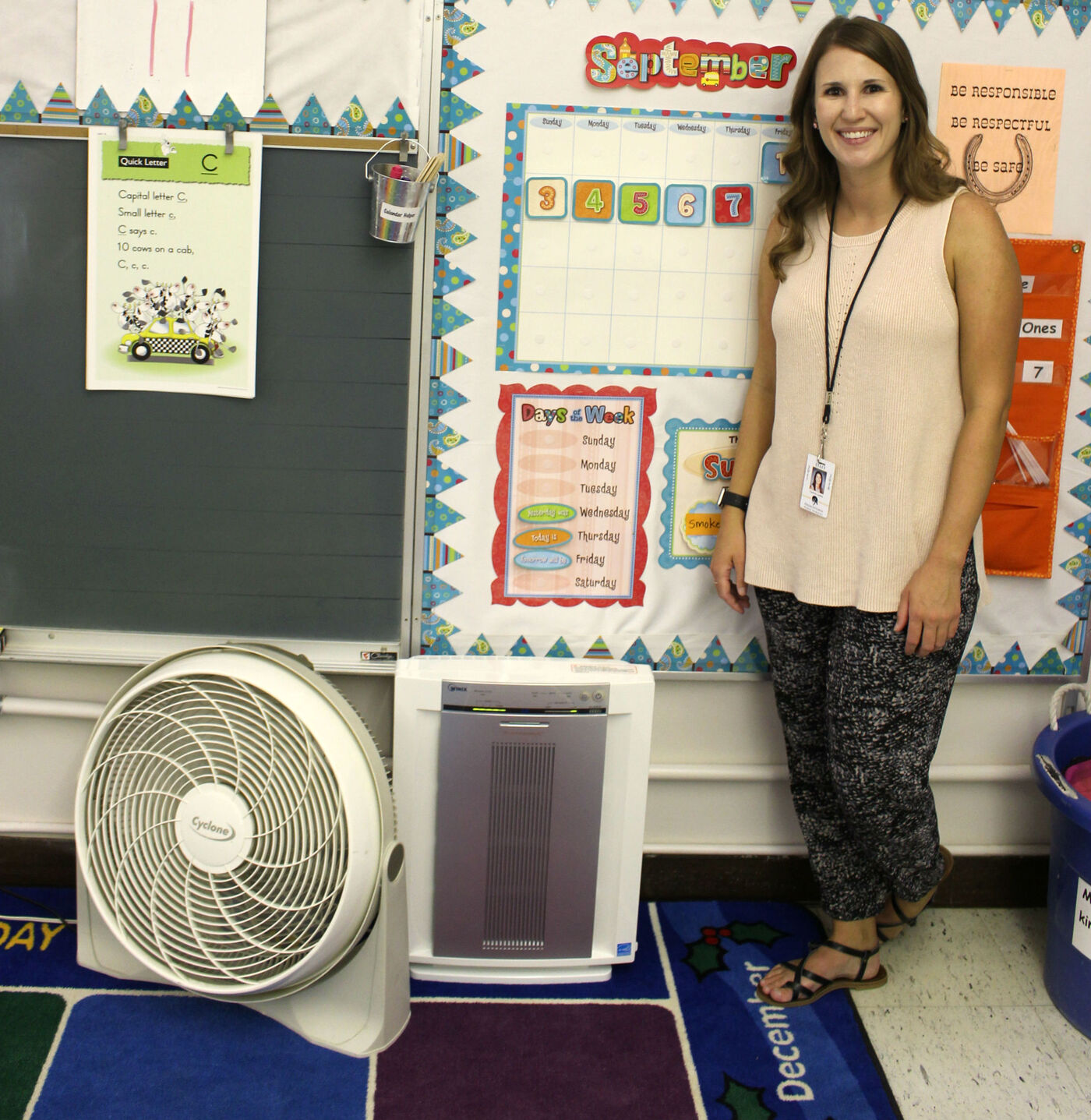 Frenchtown kindergarten teacher Justine Luebke shows off a brand new HEPA air filtration unit that will help purify the air in her classroom.

That's because burning trees release tiny particles and gases into the air, which are bad for everyone's respiratory systems. Children are especially vulnerable because their lungs are still developing.

Even keeping the windows shut and the kids indoors isn't a complete fix. Only a special type of filter can actually purify the air by scrubbing the particulate matter from smoke out of it.

Filters cost around $130 per unit, and it takes two units to clean the air in one classroom. But, most schools in Missoula County don't have them.

This situation distresses Sarah Coefield, a Missoula County Health Department air quality specialist. She says this wildfire season hit with a force that no one was expecting.

"It caught us somewhat unprepared, and it has felt like a lot of scrambling, a lot of throwing band-aids with air filters and trying to catch up," she says.

That's in part because there's no readily available funding source dedicated to creating safe air spaces. The county is now tapping into a fund set aside for public health emergencies.

Coefield has been trying to get out in front of the problem. Earlier this year, the health department teamed-up with Climate Smart Missoula, a local nonprofit, with the aim of distributing air filters to the elderly. But when this year's fire season started to stretch into the beginning of the school year, blanketing some towns like Seeley Lake in catastrophic levels of smoke, they saw another need. 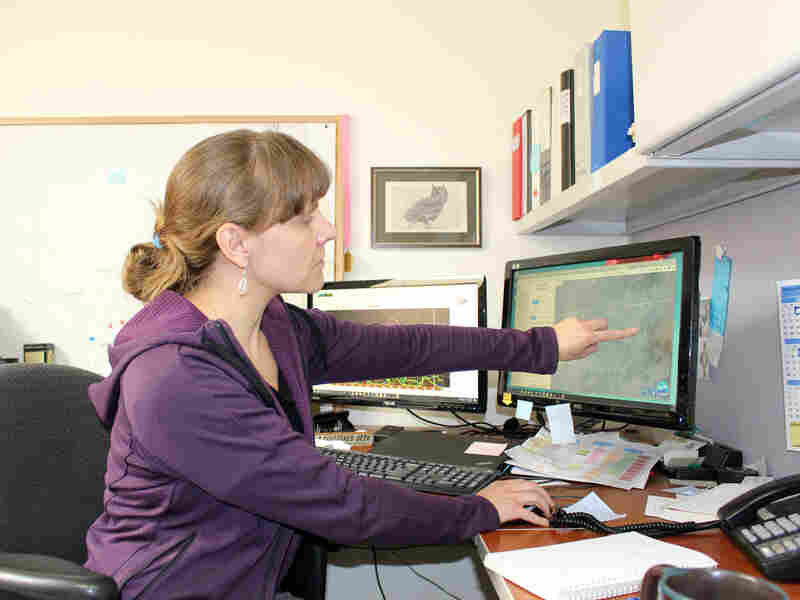 Sarah Coefield, with the Missoula County Health Department, says she and her colleagues are scrambling to help schools get air filters into classrooms. Nora Saks/MTPR hide caption 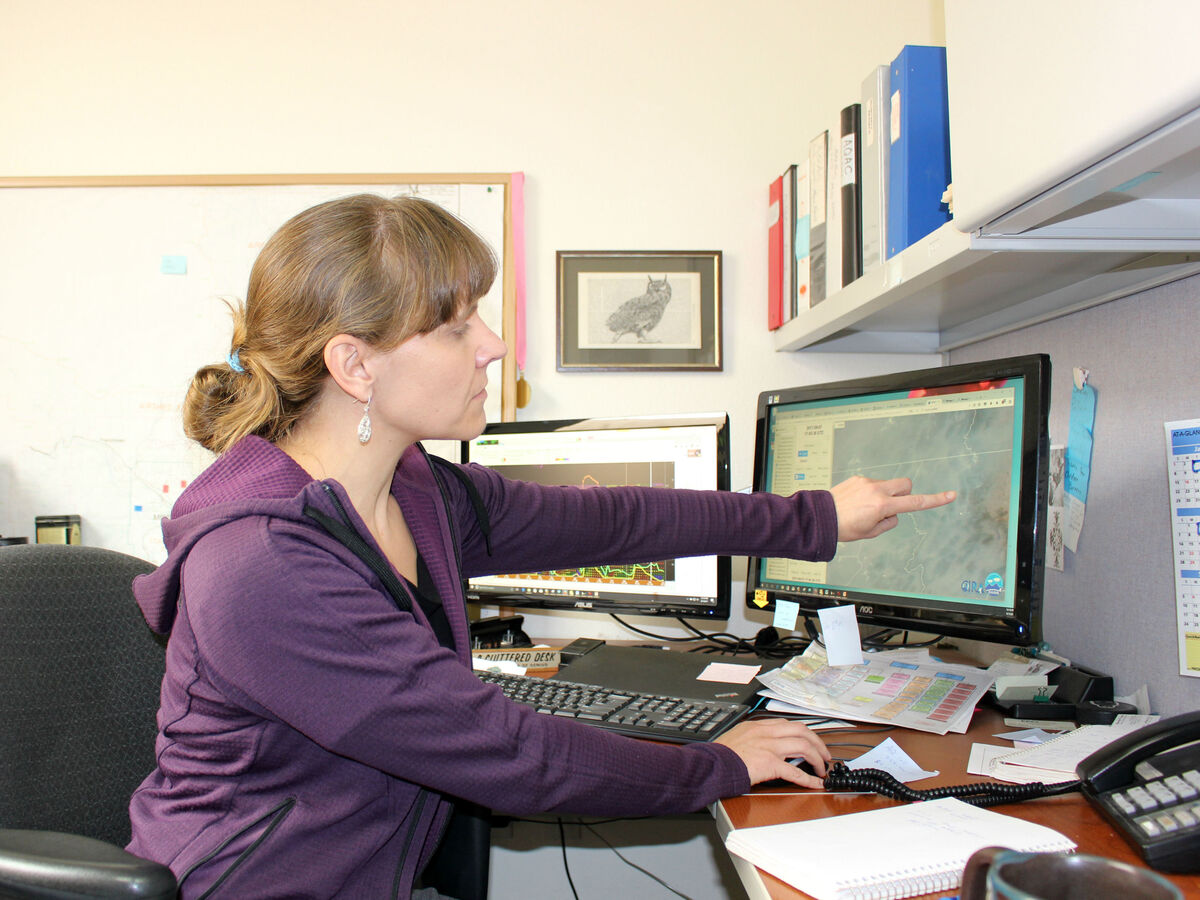 Sarah Coefield, with the Missoula County Health Department, says she and her colleagues are scrambling to help schools get air filters into classrooms.

"These kids are going to be expected to sit in the smoke. All day. And go in the morning to classrooms where it's incredibly smoky. The morning smoke is just horrendous in Seeley Lake," Coefield says.

For the last few weeks, the collaborators' priority has shifted to getting as many air filters as possible into classrooms in areas with the most hazardous air quality.

With help from schools and groups like United Way, the partners have pooled enough resources to supply HEPA air filtration units to several schools. They're currently out of units but are working on getting more.

Sarah Coefield is hopeful they're laying better groundwork for a future in which wildfires and smoke are only likely to get worse, but it still feels like triage.

"To be able to put filters in some classrooms makes it feel like we're doing something," she says. "I'm not just screaming into the void, 'It's bad, it's bad, it's bad!' We're trying to do something and be more proactive — intervention. It's not enough, though."

But, their work is inspiring others to take similar action. Back at Frenchtown Elementary, a shipment of brand new HEPA air filtration units has just arrived and two by two, they're being delivered to each classroom.

These appliances are thanks to the efforts of parent named Melissa Reynolds-Hoagland, who has two kids that go there.

"After that first day that I dropped them off at school and I saw what was going on, I just personally purchased two air purifiers for my children's classes. And then I went home that night and thought, 'What about the other kids?' "

When she found out the school couldn't afford to buy air purifiers because of state budget cuts, and the county health department was focused on more acute areas, she took the matter into her own hands.

Through Bear Trust International, the conservation nonprofit she runs, Reynolds-Hoagland, launched a campaign called Clean Air for Classrooms. They raised almost $10,000 — enough to buy filters for every classroom at Frenchtown Elementary and intermediate school. The company supplying the filters for the schools is selling them at a discount.

"I know everyone is financially tapped and everyone's got a job to do," says Reynolds-Hoagland. "I knew I had an opportunity, and so I just wanted to see if I could rally our community. And it worked. People are good — they want to help. This just provided a platform for everyone to pitch in."