Accessibility links
Private Insurer Steps Up To Advertise Open Enrollment For Obamacare : Shots - Health News The federal government has cut advertising for the Affordable Care Act's enrollment period by 90 percent. So insurer Oscar Health has started its own campaign in New York and five other states. Health insurance company Oscar has started its own ad campaign for the Affordable Care Act. These enrollment dates apply to New York state; the dates to enroll in federally run exchanges are Nov. 1 to Dec. 15. Oscar Health hide caption 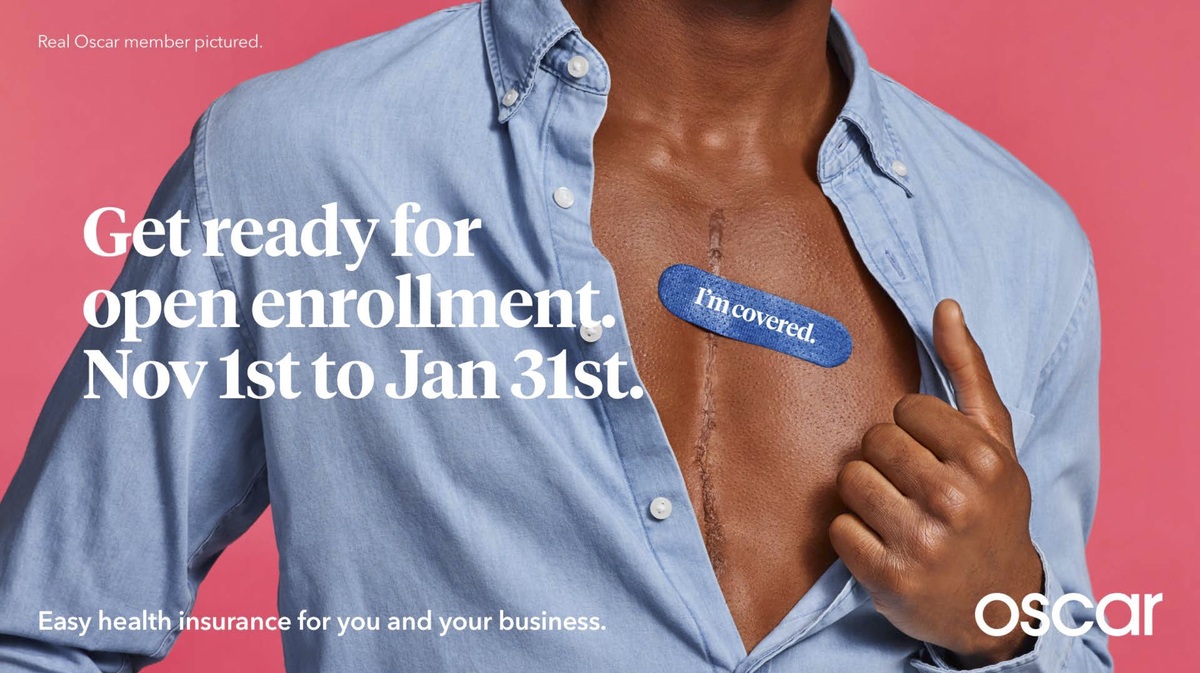 Health insurance company Oscar has started its own ad campaign for the Affordable Care Act. These enrollment dates apply to New York state; the dates to enroll in federally run exchanges are Nov. 1 to Dec. 15.

Open enrollment for Affordable Care Act insurance doesn't start for another six weeks. But the quirky insurance startup Oscar Health is launching an ad campaign Monday aimed at getting young people to enroll.

The company is boosting its ad spending after the Trump administration announced it would slash its ACA advertising budget by 90 percent.

On Monday morning, commuters in New York City were met with posters blanketing the subway system that showed actual Oscar customers touting the benefits of having insurance coverage.

One poster shows a pregnant woman holding her belly with a bandage on it that says "we're covered."

Oscar Vice President Sara Rowghani says the company is stepping up in part because the government is pulling back.

"Particularly in this year of uncertainty, it's really important for us to be in market early and and reassure the 22 million folks that are insured that it is really important to get covered," she tells Shots.

Rowghani says the early message focuses on reminding people about open enrollment. The ads include the dates enrollment starts and ends, with the Oscar logo much less prominent.

"What we're really communicating is this message of getting coverage — get covered, " she says.

The company declined to say how much it's spending on the ads, but did say it's a multi-million dollar campaign. It will run in the six states where Oscar does business, and will be on TV, radio and in subways and buses. That includes in New York state, where open enrollment runs from Nov. 1 through Jan. 31, 2018.

But advertising from private insurers won't be able to match the power of the advertising in years past by the federal government, says Lori Lodes, who ran outreach for the Affordable Care Act during the Obama administration as director of Communications for the Centers for Medicare and Medicaid Services.

"The reality is there's only so much that issuers and advocates and other folks can do from the outside, because the government, historically, has been a very trusted messenger," she says.

Trump's Department of Health and Human Services says it's cutting the advertising budget for open enrollment from $100 million down to $10 million. And it will cut back on grants for navigators who help people sign up for a health plan by about 40 percent to $36 million.

The state of California, which runs its own insurance exchange, spent $110 million on advertising around its open enrollment period last year.

HHS officials say that most consumers are already aware of the Affordable Care Act and that the outreach isn't as effective as when the law was new.

However, the agency this year has made major changes, including cutting the open enrollment period for the 35 states that use the federal website, Healthcare.gov, to six weeks from three months. Open enrollment for those customers starts on November 1 and ends December 15.

The plan is to eliminate expensive television advertising and instead focus on e-mail and text message outreach.

"Television not only was the number one driver of enrollment, but it made all those other channels of communication that much more effective," she says.

She says the agency tracked which methods of communication were most effective and television came out on top, by far. She says all that research is available to the current HHS leadership.

Critics of the move say cutting the advertising and outreach budget while making changes to the open enrollment dates add up to an act of sabotage by Trump and Health and Human Services Secretary Tom Price, who have been vocal critics of the ACA.

"Cutting ACA Advertising by 90% is evidence-based policy ... if policy goal is sabotage," Daniel Polsky, executive director of the Leonard Davis Institute of Health Economics at the University of Pennsylvania, said On Twitter.

The move fits into a pattern of actions by the Trump administration that have destabilized the health insurance markets and boosted uncertainty over the future of the program.

State officials are also concerned. At a hearing earlier this month in the Senate, several state governors said the cuts will likely lead to declines in enrollment.

"The idea that we'll cut 90 percent of the education dollars and 40 percent of the navigator dollars when what we need to do is draw these people in, doesn't make sense," Montana Gov. Steve Bullock said

Gov. Charlie Baker of Massachusetts, which has run its own exchange for more than a decade, told the senators that the outreach and advertising in his state was effective. But he added that the state made adjustments along the way.

"It's at least as important what you're doing as what you spend it on," he said. "We've tried to do things that move the needle on enrollment and drop the things that don't."

Oscar is the first private insurance company to step in to try to make up for government's advertising cuts. Whether others join them — and whether they're effective — will only be clear when open enrollment ends, and the numbers are tallied sometime early next year.