Accessibility links
Republicans Try One Last Effort To Repeal Obamacare : Shots - Health News Republicans are taking one last shot at repealing and replacing the Affordable Care Act, also known as Obamacare. But the new plan isn't much different from the last one that failed. 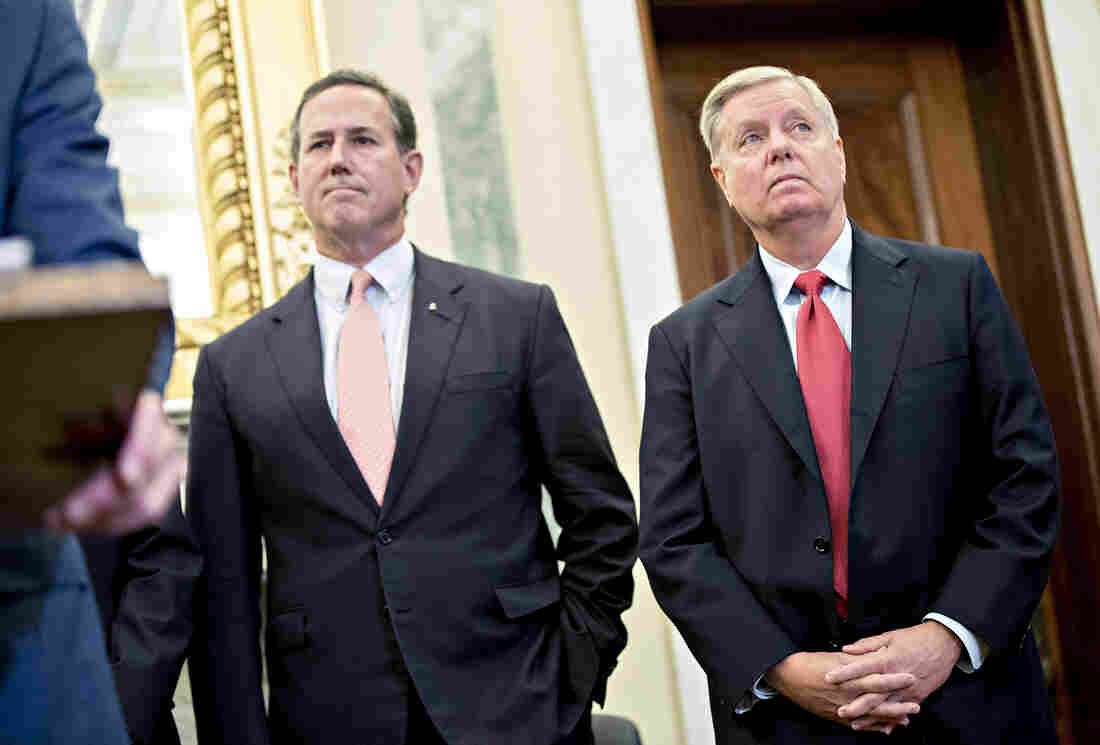 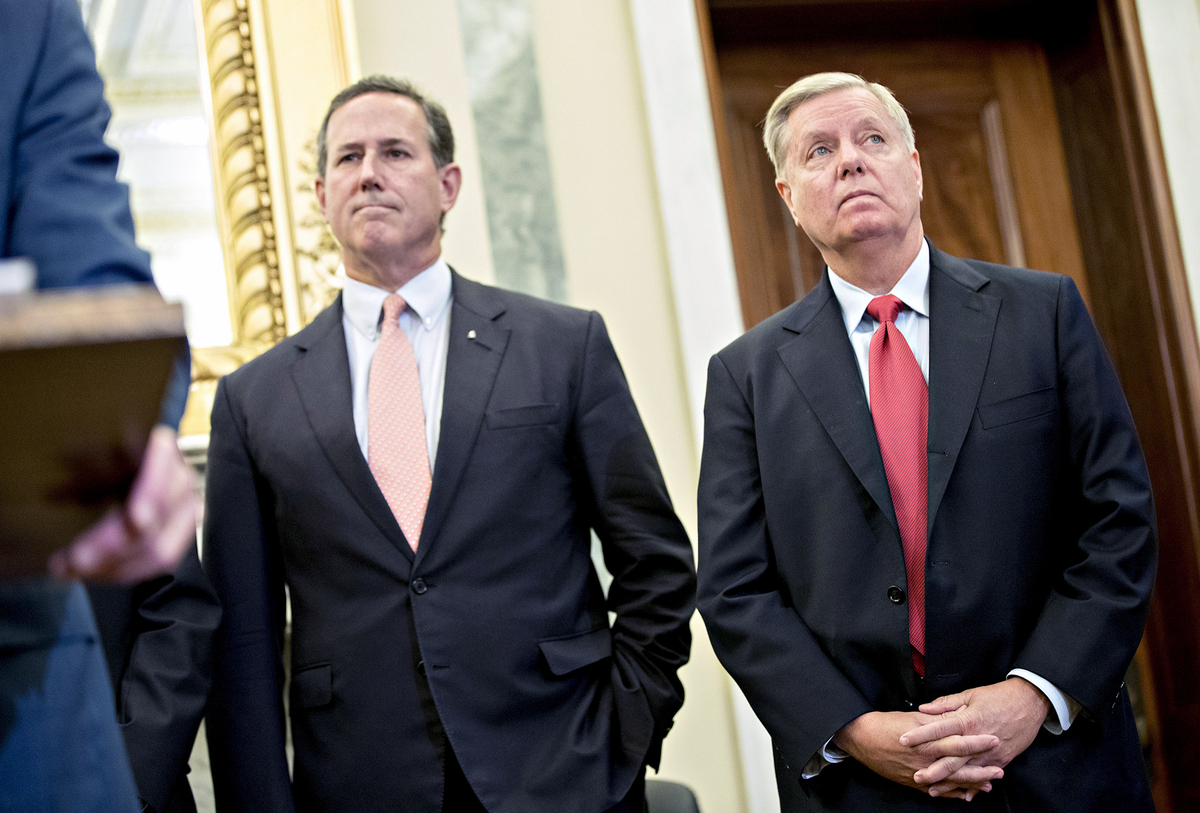 It wasn't that long ago that the effort to repeal and replace the Affordable Care Act died once and for all in the Senate.

Or so many thought.

But like the killer robot in The Terminator or the undead fighters in Game of Thrones, the repeal effort has risen once again from the ashes in the form of a bill known as Graham-Cassidy.

The bill, introduced Sept. 13 by Sens. Bill Cassidy, R-La., and Lindsey Graham, R-S.C., with little hope of going anywhere, has gained steam in its short life and now looks like it may actually come to a vote in the Senate in the coming days.

Many opponents say the bill will result in millions of people losing their insurance coverage.

Here's what it does:

Graham-Cassidy essentially deconstructs all of the major programs created by the Affordable Care Act, gathers up the money and hands it over to states to run their own health care programs.

It gets rid of both the subsidies that help people buy individual health insurance policies and the reimbursements to insurance companies for offering price breaks on copayments and deductibles to the lowest-income customers.

It rolls back the Obamacare Medicaid expansion that was adopted by 31 states and Washington, D.C., and it eliminates the Basic Health Program that was created under the ACA and implemented in New York and Minnesota.

All the money that currently goes to those initiatives would instead be distributed to the states as block grants that would particularly benefit those states that did not expand Medicaid earlier and those states with lower health care costs.

"Overall, this is a resuscitation of past bills aimed at repealing the Affordable Care Act," says Daniel Dawes, author of the book 150 Years of Obamacare, who recently moved from Morehouse School of Medicine to Nova Southeastern University. "It would have the same, if not a worse, effect on vulnerable populations across the United States."

Graham and Cassidy say they want to get the federal government out of the health care business.

"If we give the states the flexibility to come up with their own solutions, they will find solutions that will work better for their states than the Affordable Care Act," Cassidy said in a speech in the Senate last week.

There's no official government analysis of the plan. The Congressional Budget Office hasn't completed one yet.

But many experts say the bill would have an impact similar to earlier Republican proposals for repealing the Affordable Care Act. Graham-Cassidy would eliminate coverage for many low-income people who gained insurance through the Medicaid expansion and could gut protections for people with existing medical conditions because states would be encouraged to seek waivers from the federal government's rules on what must be covered.

Those cuts to Medicaid were one of the main reasons that some Republican senators refused to vote for a similar bill last time around.

The left-leaning Center on Budget and Policy Priorities says in its own analysis that Graham-Cassidy would lead to 32 million people losing coverage over 10 years. It would cut federal funding for health care by more than $400 billion over 10 years, the groups says.

And the liberal Center for American Progress says premiums for people with pre-existing conditions could rise by thousands of dollars because states could let insurers charge that population more.

Graham and Cassidy say their plan restores fairness to a system where currently more than a third of the money spent on the Affordable Care Act goes to just four states: Massachusetts, Maryland, New York and California.

Those states now get a disproportionate share of federal money because they have large populations, have expanded Medicaid and have high health care costs in general.

"We equalize how much each American receives toward her care, irrespective of where she lives," Cassidy said on Sept. 14.

Timothy Jost, a professor at Washington and Lee University School of Law who wrote a widely used textbook on health law, says the proposed change also has political benefits for Republicans.

"In general, the legislation would over time move money away from states, predominantly Democratic, that have expanded Medicaid and aggressively pursued enrolling their lower income populations in Medicaid and exchange coverage," he wrote in a Health Affairs blog post. "Money would move toward states, predominantly Republican, that have not expanded Medicaid."

At two hearings earlier this month at the Senate Committee on Health, Education, Labor and Pensions, governors and insurance commissioners from several states said they support giving more power to states to run their own health care systems.

But a few balked at the cuts in funding that would very likely go along with the bill.

The path to passage of this bill is narrow. If three senators vote no, it can't proceed. And that vote has to happen before Sept. 30, when the bill authorizing Senate Republicans to work on ACA repeal expires.

Republican Sens. Susan Collins of Maine and Lisa Murkowski of Alaska opposed earlier repeal bills because they did too much damage to Medicaid. And Sen. John McCain, R-Ariz., voted no because lawmakers didn't go through the normal hearing and consideration process.

This bill doesn't fix any of those problems.