Accessibility links
Entrepreneurs Struggle To Hire As Health Care's Future Remains Cloudy : Shots - Health News Obamacare made it easier for people to leave jobs to start their own ventures and entice others to join, knowing they could buy insurance independently. Some entrepreneurs worry that could change. 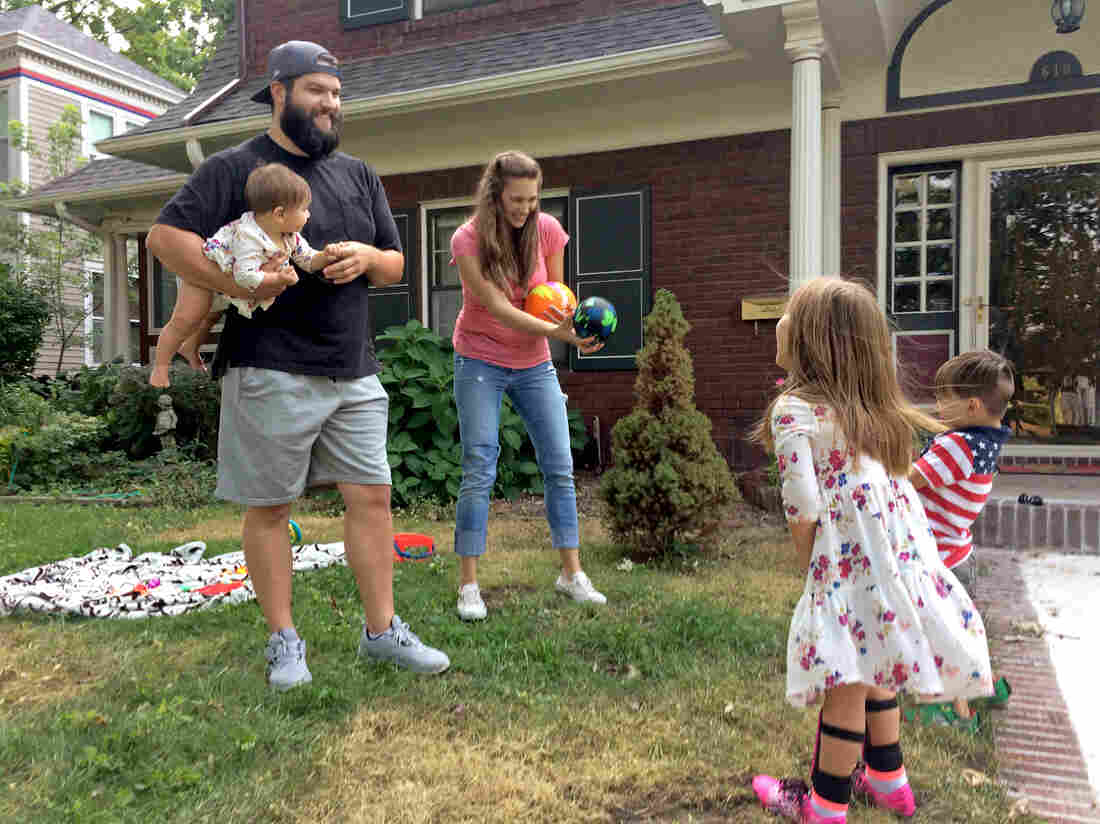 Entrepreneur Stinson Dean (left) and his wife Stephanie play with their three children in their yard in Independence, Mo. He says the Affordable Care Act made it possible for him to start his own business. Alex Smith/KCUR hide caption 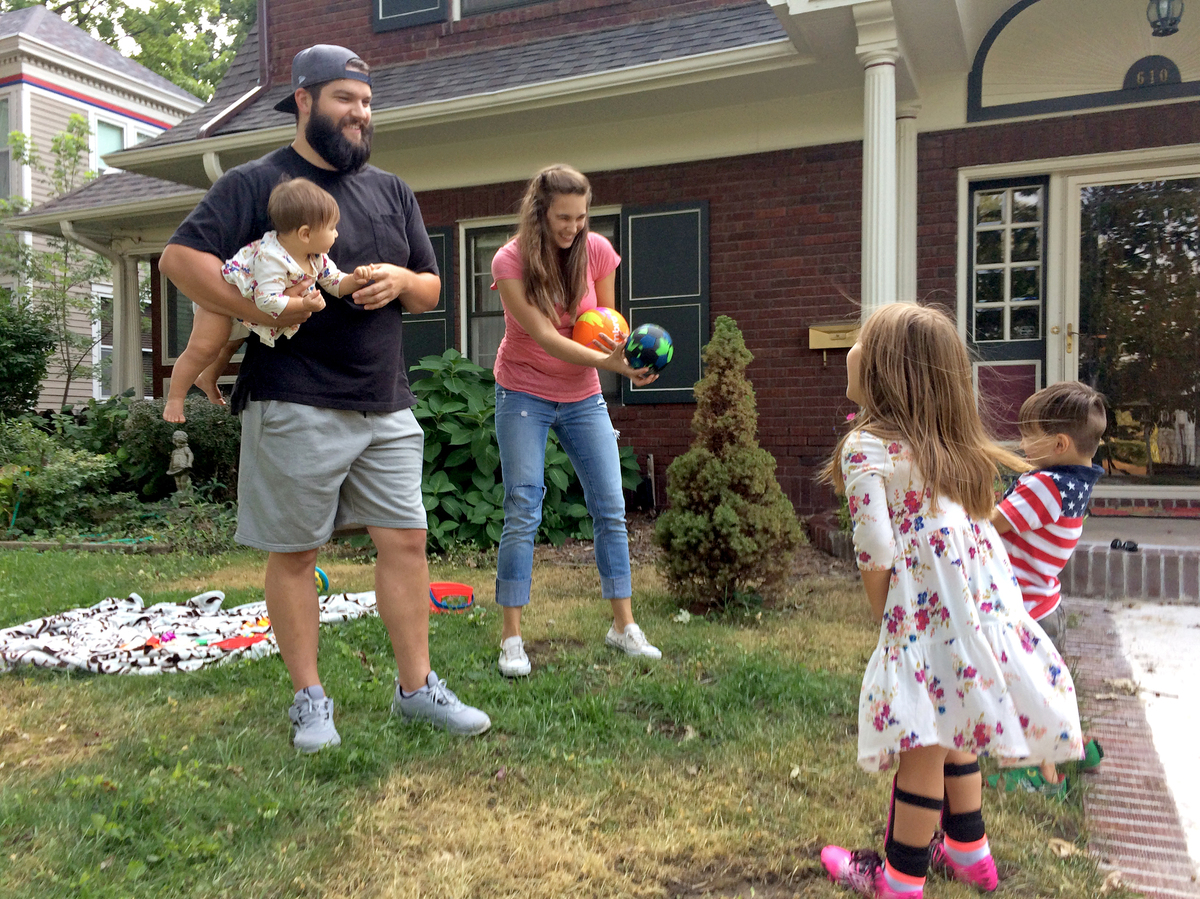 Entrepreneur Stinson Dean (left) and his wife Stephanie play with their three children in their yard in Independence, Mo. He says the Affordable Care Act made it possible for him to start his own business.

Stinson Dean, an entrepreneur from Independence, Mo., is used to taking risks. He buys Canadian softwood framing lumber to sell to lumberyards in the U.S. and says coping with the ups and downs of the market is an inevitable part of doing business.

But when he started the company about a year and a half ago, he laid down a firm rule.

"One of the things I wasn't willing to risk was the health of my family," Dean says.

Dean is the proud father of three young children — two girls and a boy. Playing with them in the front yard before dinner, he and his wife, Stephanie, talk about the possibility of another.

Like many Americans, Stinson Dean has nervously watched this year's national health care debate. He says the Affordable Care Act made it possible for him to start his business. Now, uncertainty about the ACA's future is affecting his business's ability to grow.

In May of 2016, Stephanie was pregnant with their daughter Julie, and Stinson was working as a commodities risk consultant.

A few months before a baby's due date is typically not the time for a big career move, but it also happened to be when the lumber market seemed to offer a once-in-a-lifetime opportunity to buy low and sell high.

Encouraged by the availability of affordable insurance, the family took the plunge. Dean left his job and started his company.

The move paid off, as new construction boosted Dean's business far beyond what he imagined.

He's now ready to expand and bring on three or four new people, but there's a problem.

"There's a huge unknown with the ACA and what that's going to look like," Dean says.

President Trump and many members of Congress campaigned with promises to repeal and replace the Affordable Care Act, and they've spent much of this year attempting to do so.

That's meant hardship for Dean. He's having trouble convincing people with steady jobs and great benefits to take a chance and come work for him.

Repeal and replace efforts are again alive in the Senate, and the president has threatened to cut subsidies to insurers for to help pay for sicker, more expensive patients. That strain, on top of already unstable insurance markets, has led Dean to worry about whether decent insurance coverage will be available in the long run for him, his family, and potential new employees.

"What that's doing for me is preventing me to convince folks who are in a similar situation to where I was — a nice corporate job, making good money, with great benefits, with kids — convincing them to leave that to come work for me with no benefits," he says. "They're going to have to go on the individual marketplace, on HealthCare.gov just like I did and pick a plan."

Exactly how the ACA has affected entrepreneurs and job growth is still unclear, according to Dean Baker, co-director of the left-leaning Center for Economic and Policy Research, based in Washington D.C. But there's been a sharp increase in entrepreneurial activity since 2013, when the insurance marketplaces started.

Baker says the ACA has helped entrepreneurs by leveling the playing field in the competition for hiring new talent.

Prior to the health law, entrepreneurs had been at a disadvantage compared with larger businesses who were more likely to be able to afford to offer insurance.

"Once [an entrepreneur's] workers are able to get insurance through the exchange, much of that disadvantage goes away," Baker says.

Baker says uncertainty is poison for any business, but all the questions about the ACA's future have made 2017 especially toxic for entrepreneurs.

"For a lot of small businesses, they are sitting there with some trepidation, saying, 'OK, how does this work out? Where are we a year from now? Where are we two years from now?' And presumably, at least some of them are going to be putting their plans on hold," Baker says.

Stinson Dean says that the lumber world once again is opening up some big opportunities, but he may not be able to take advantage of them. Dean worries he may be missing out on his chance to go big, even if the ACA survives this year.