Accessibility links
Transgender Hockey Player Postpones Treatment To Keep Playing : Shots - Health News Sports leagues have struggled with how to define gender when it comes to deciding who can play. Pro hockey player Harrison Browne has decided to postpone hormone therapy for one more year on the ice. 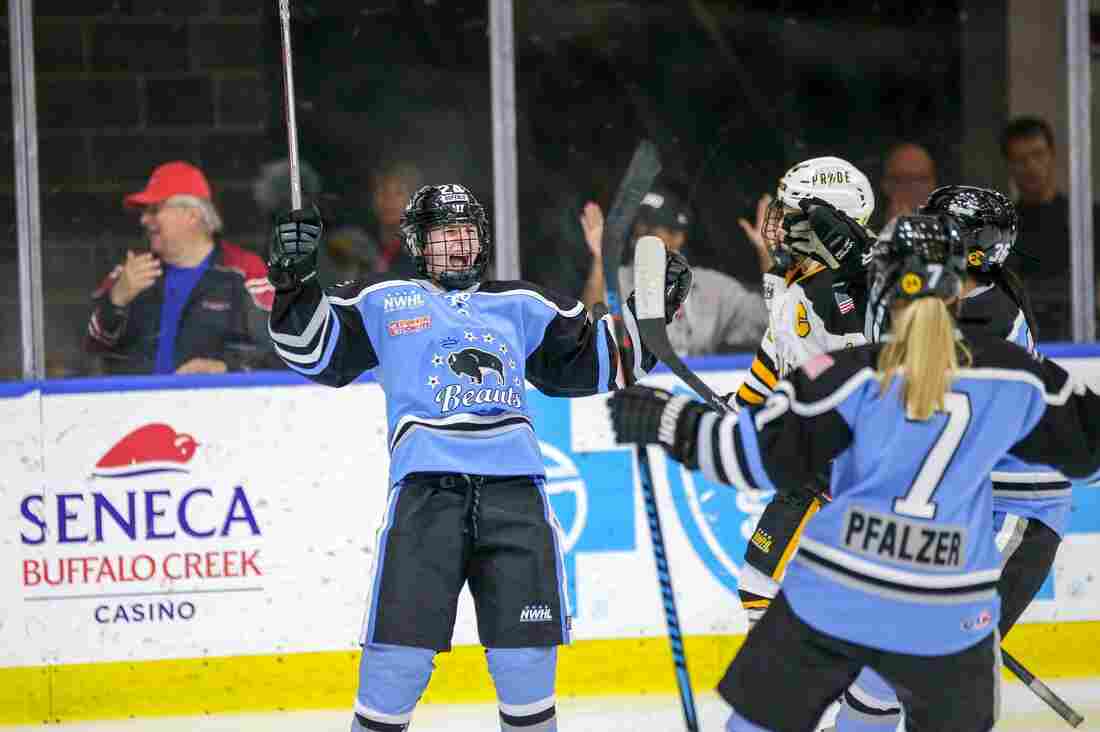 Harrison Browne, seen here playing for the Buffalo Beauts, says he feels lucky to be part of a league that accepts him and wants him to feel comfortable. Courtesy of the National Women's Hockey League hide caption 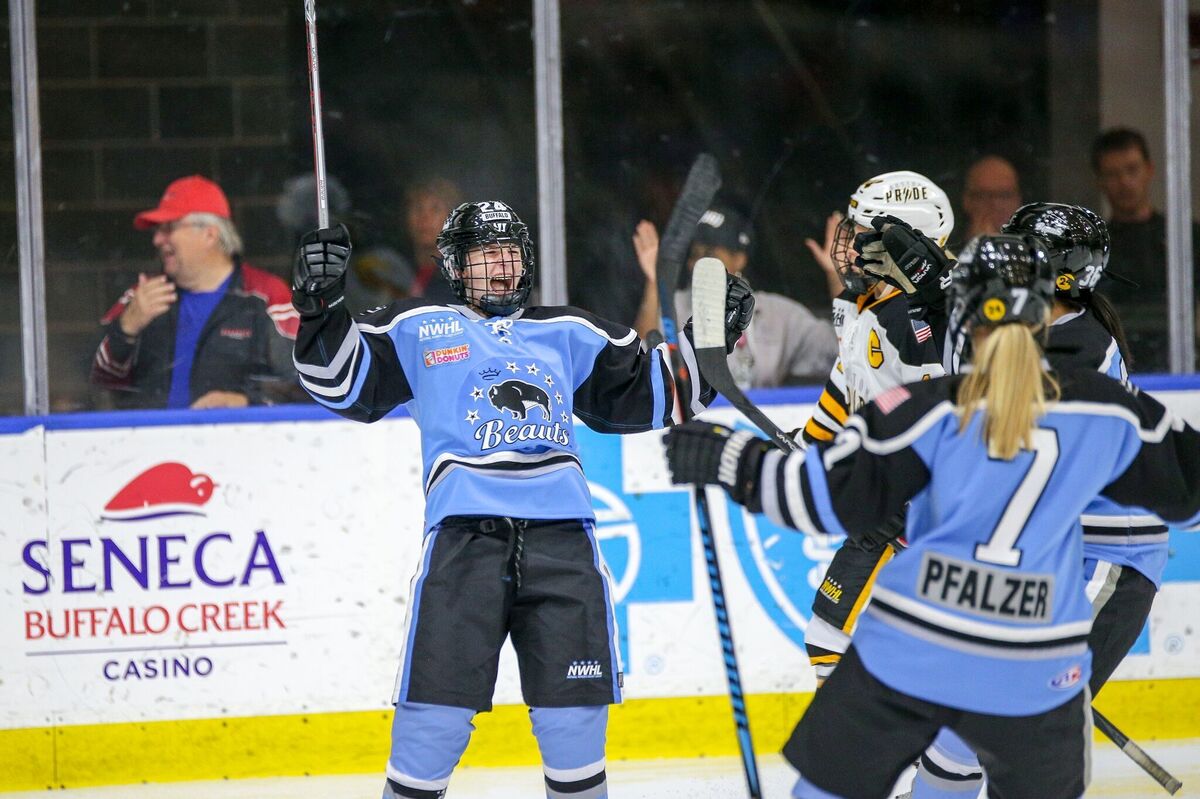 Harrison Browne, seen here playing for the Buffalo Beauts, says he feels lucky to be part of a league that accepts him and wants him to feel comfortable.

Last year, Harrison Browne was done with the National Women's Hockey League, retiring at age 23 in order to undergo hormone therapy and surgery as part of his physical gender transition.

But earlier this month, Browne, a transgender man, made a surprising announcement: He would delay his medical transition to sign with the New York Riveters and play another season in the National Women's Hockey League. The league doesn't require that players identify as female, but says they must not be using hormone therapy if they are transgender men, meaning people who are designated female at birth but identify as male.

Browne's tough decision sheds new light on how the strict line between male and female in the world of sports is blurring, as society grapples with new norms of gender identity.

Before the 2016 season began, Browne went to the NWHL to tell them he was transgender and wanted to go by male pronouns and the name Harrison Browne. This kind of "coming out" when it comes to gender identity is sometimes called "socially transitioning," in which transgender people begin to express their true gender identity with others. By their old league rules, Browne's identifying as a man wouldn't have necessarily disqualified him from playing in the NWHL. But in a women's league, it certainly raised questions.

What resulted was the NWHL adopting the first policy addressing the inclusion of transgender players in a professional sports league. The NWHL policy allows transgender men to play so long as they aren't undergoing testosterone therapy and allows transgender women to play if they have declared a female gender identity and have testosterone levels "within typical limits of women athletes." Non-professional leagues like the International Olympic Committee and the NCAA have recently adopted policies about including transgender players as well.

"For myself, being stuck in the binary of men's and women's sports is not ideal," Browne says. "But I'm lucky enough to be part of a league that accepts me and wants me to feel as comfortable as I can. This is the first trans policy in professional sports, that's huge."

Historically, men and women were separated in competitive sport (when women were allowed to play at all) because of social constraints and the presumption that women were too weak to physically exert themselves. These days it's accepted that regardless of gender you can be an elite athlete, but most sports are still separated by gender for the sake of good competition, as most men are bigger than most women and perform various athletic events differently.

Biologically, much of this size and performance difference can be explained by the fact that the average man has about 10 times the amount of testosterone as the average woman. The hormone is responsible for characteristics society tends to think of as male: like beards and deep voices, and also muscle mass and strength.

For years, professional sports has struggled with the fact that biologically, not everyone fits into a "male" or "female" box. And not everyone's gender identity matches the physical body, genitalia, reproductive organs and chromosomes (or even set of hormones) they have. That's led to instances of "gender testing" and even suspending and banning female athletes who have naturally high testosterone levels, like South African runner Caster Semenya, and Indian sprinter Dutee Chand, even though testosterone doesn't automatically make you a gifted athlete (see: most men in the world).

The governing body for track and field that barred Chand and Semenya from competing has until the end of September to gather evidence as to whether women with naturally high testosterone have a marked advantage over other women athletes. But the preliminary evidence they've released shows only a slight advantage in certain cases — well below the advantage elite male athletes have over elite female athletes.

Transgender athletes like Browne have been trying to find their rightful place in the gender-segregated sports world for years. First there's the question of hormone therapy. Then there's the simple fact that many transgender people are raised as children and young adults in a gender they do not identify with, so they may have started their sports careers, or even completed them, in leagues that don't match their gender identities, making transitioning tricky — and sometimes very public.

After a journalist reported in 1976 that tennis player Renée Richards was a transgender woman who had previously competed in men's tennis tournaments, the U.S. Open instated a chromosome test for the women's tournament. Richards, who had undergone sex reassignment surgery, sued the U.S. Tennis Association for gender discrimination and won.

Today, Browne's decision to stick with the NWHL, even though he had to delay hormone therapy, shows how even the most gender segregated arenas are attempting to make room for varied gender identities — but it also shows that there are no easy solutions.

In an ideal world, Browne could physically transition and continue to play his sport in a men's league that matches his gender identity, as other transgender athletes have done. But, in Browne's case, he doesn't see that as very likely.

"Unfortunately, I am very small, even by female standards. I'm 5'4" and weigh 115 pounds," he says. "So unless I go through some really drastic changes under hormone therapy, I don't really see that in the cards."

National Women's Hockey League Commissioner Dani Rylan says the league was certain they wanted to make room for Browne and other transgender or nonbinary players. "There was no hesitancy. We wanted Harrison and all players to feel protected. We wanted to be inclusive."

The NWHL enlisted You Can Play, an organization that advocates for access to sports for LGBTQ people regardless of gender identity or sexual orientation, to help them update their league guidelines to make room for Browne and other transgender players in a women's league.

"It's a women's league, so there was the balance of making sure that we are respecting women's sports and athletes' identities," says Chris Mosier, vice president of program development at You Can Play, and a transgender athlete who has competed for the men's U.S. national team for duathlon. "But we also wanted to make room for Harrison to make a social transition and asking people to address him in a way authentic to him. We had to put in writing where he fits in a league like the NWHL."

According to the league guidelines: "The NWHL supports athletes choosing to express their gender beyond the binary of female and male." However, the guidelines walk a thin line between making room for some people outside of that strict gender binary, like Browne, while maintaining the idea of a "level playing field" when it comes to biological differences as being almost wholly dependent on levels of testosterone.

Last year at the end of Browne's season with the Buffalo Beauts, he released a YouTube video that showed how difficult it was to decide between hormone therapy and hockey. "I just simply can't really go on moving on to these pivotal moments in my life...I'm turning 24 years old, I'm starting my career off the ice...And I do not want to start a job and pursue a career as a pre-op trans man that's viewed as a woman in society. I get misgendered all the time ...I played hockey for 15 years and made a huge career out of it...I milked it for as long as I could," he said.

But during the offseason Browne realized he wasn't actually done playing hockey. He canceled a scheduled surgery and put off hormone therapy. "It was a tough decision," Browne says. "But I just started thinking about it and when it came time for me to really make the moves that would stop me from playing in the NWHL, I just felt I had more to give, hockey-wise and to the LGBTQ community by being active and staying visible and as open as I can."

Mosier agrees that Browne's visibility as a trans man playing in the National Women's Hockey League, is important for the sports world. Young LGBTQ athletes are half as likely to participate in sports as their peers, he says.

"What this process with Harrison says is that with more visibility more people are feeling comfortable being their authentic self and continuing to play the sports they love," he said. "Leagues and teams and organizations are in a position where they need to find spaces for trans athletes and understanding that we have been playing sports for many years and we will continue to play sports on all levels."

Browne thinks putting off his physical transition and being open about his identity can help everyone understand transgender people with a little more nuance. He even welcomes the questions he gets when people who don't know he is transgender ask how he plays in the NWHL.

"I think that right now, the images of trans people in the media that people are seeing show one aspect of a trans person who is fully transitioned and that's what they think trans is," says Browne. "When actually, gender identity is how you feel on the inside and there are many ways to transition, there are different stages of transitioning—you can socially transition like I am, for instance—and you might not ever physically transition. But just because you can't see physical changes doesn't mean you should discredit a person."

Browne has already seen his gender identity celebrated by the NWHL fan base. Last season, he was one of four NWHL players voted by fans to play in the All-Star game, and his jersey was the third most purchased in the league. "Women's sports and women's hockey in general is a totally different ballgame," he says. "It's so LGBTQ friendly and inclusive and openminded."

That support gave Browne even more incentive to play one more season, for the Riveters in metropolitan New York, where Browne will have even more opportunity to be seen. "I'm excited to see what kind of reach I can achieve," he says.

Maggie Mertens is a writer in Seattle who has covered gender and sports for numerous publications. Follow her @maggiejmertens.