Accessibility links
Insurer Anthem Will No Longer Cover Many Scans Done By Hospital-Owned Clinics : Shots - Health News MRI and CT scans done at hospitals for outpatients are often too expensive, says the firm, which insures patients in 14 states. The shift in policy won't apply to mammograms or X-rays, Anthem says. 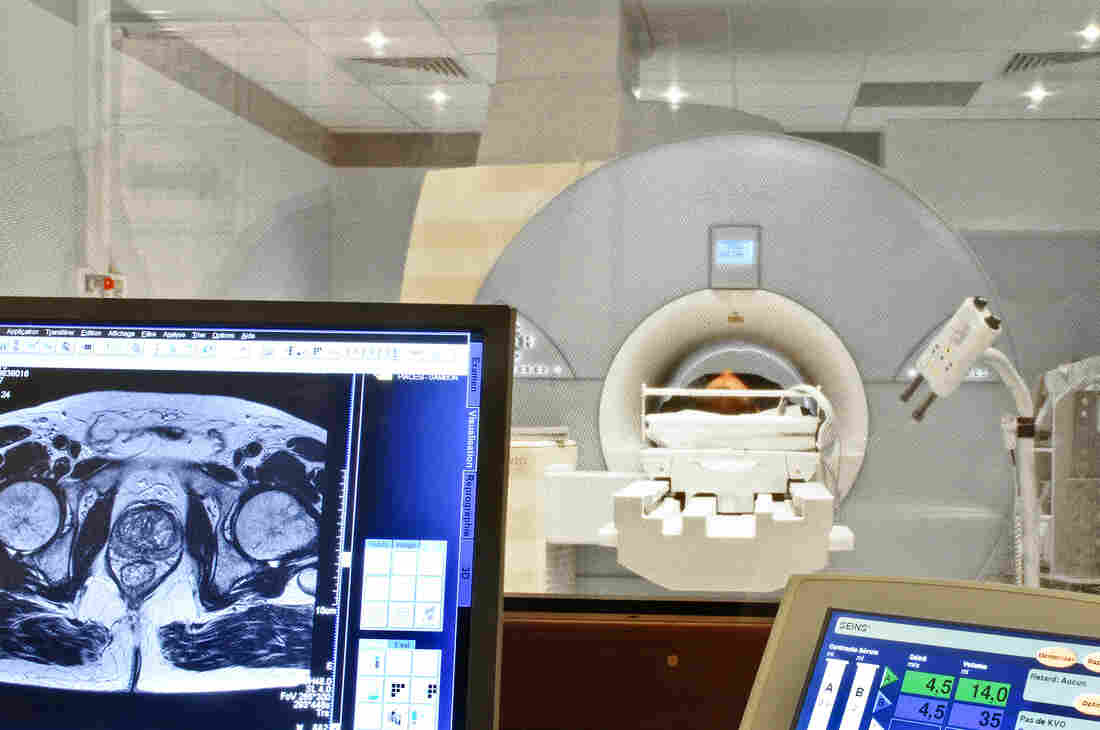 Critics of Anthem's policy say imposing a blanket rule that gives preference to freestanding imaging centers is at odds with promoting quality and will lead to fragmented care for patients. Media for Medical/UIG/Getty Images hide caption 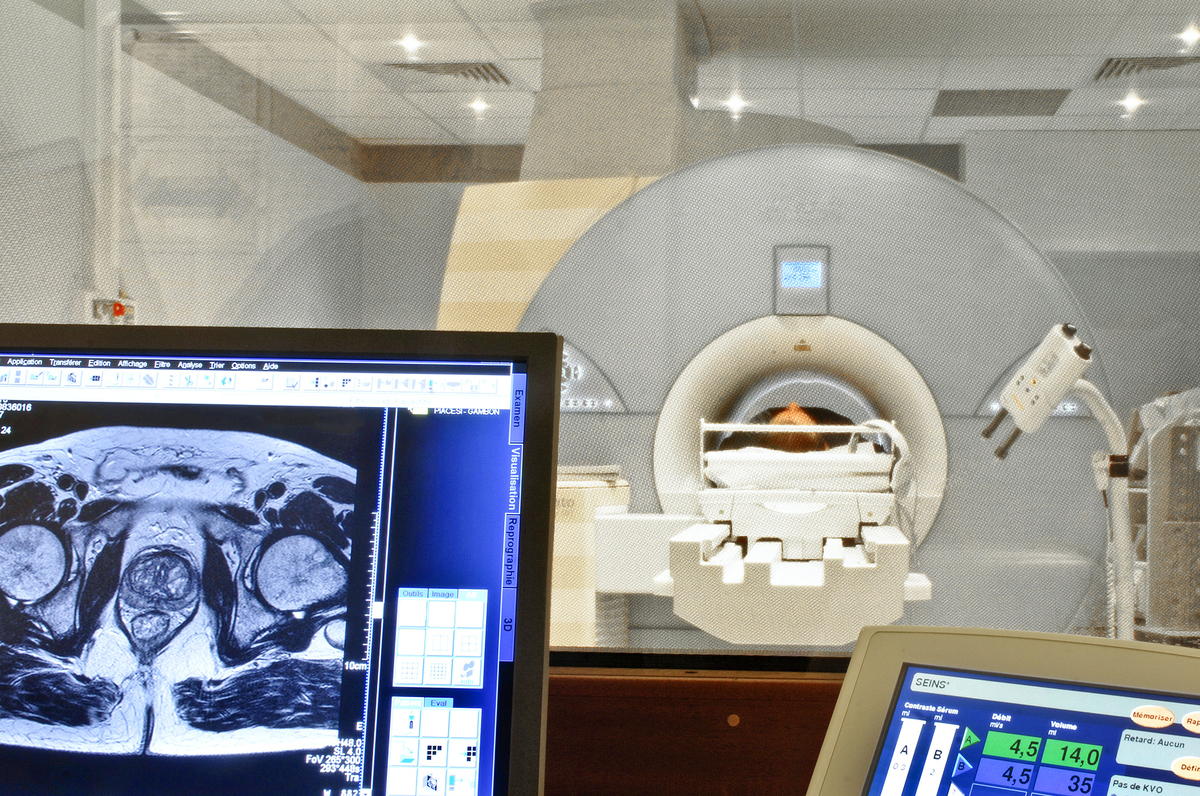 Critics of Anthem's policy say imposing a blanket rule that gives preference to freestanding imaging centers is at odds with promoting quality and will lead to fragmented care for patients.

Tightening the screws on pricey imaging exams, health insurer Anthem will no longer allow many patients to get MRI or CT scans at hospital-owned outpatient facilities, requiring them to use independent imaging centers instead. The insurer began phasing in these changes in July and expects to finish by March.

But critics say that imposing a blanket rule that gives preference to freestanding imaging centers is at odds with promoting quality and will lead to fragmented care for patients.

"To achieve true value, you have to have high-quality care at a good price," says Leah Binder, president and CEO of the Leapfrog Group, a nonprofit organization that advocates for improved safety and quality at hospitals.

"Anthem would be better off judging the quality of these [imaging] diagnoses," regardless of where they're provided, and setting payment accordingly, she says.

Imaging tests are generally subject to preapproval by Anthem to confirm that they're medically necessary. Under the new policy, AIM Specialty Health, an Anthem subsidiary, will also evaluate where they should be performed. Doctors who request nonemergency outpatient MRI or CT scans that can be done at an independent imaging center rather than one owned by the hospital will be given a list of centers eligible for patient referrals.

In rural areas that lack at least two imaging centers that aren't owned by hospitals, outpatient scans from hospitals will still be approved.

"There are huge cost disparities for imaging services, depending on where members receive their diagnostic tests," she says. "Members can save close to $1,000 out-of-pocket for some imaging services for those who haven't met their deductible, and up to $200 for those whose plans require only a copay."

Hospital imaging is indeed pricier than imaging at freestanding centers. Average prices for MRI and CT scans ranged from 70 percent to 149 percent higher at hospitals, according to an analysis published by the Healthcare Financial Management Association, a membership group for health care finance professionals.

But price isn't the only important variable, and the perception that all imaging studies conducted by qualified providers generally yield comparable results is wrong, Binder says. A study published last year in The Spine Journal, for example, found that when a "secret shopper" patient with low back pain received MRI at 10 imaging centers over a period of three weeks, each center reported different findings. Some missed a problem they should have found, while others detected nonexistent problems.

The Anthem policy applies to 4.5 million enrollees in individual and group plans in 13 of the 14 states in which Anthem operates, according to McLaughlin. (Self-funded employers that pay their employees' claims directly are exempted from the policy, but can incorporate it if they wish.) New Hampshire is the only state on that list without an implementation date, McLaughlin says.

This is the second change in coverage from Anthem this year that's attracted attention. The company has also come under fire for a new policy under which it will no longer pay for emergency department visits that it determines after the fact weren't emergencies. Some physicians and others worry that policy could discourage people who might need emergency treatment from seeking care.

Cancer patients, who often are being treated at cancer centers within hospitals, would feel the effect, notes Dr. J. Leonard Lichtenfeld, deputy chief medical officer for the American Cancer Society.

"They have to go to a new outpatient facility, get the film, get it read and transmitted back to the cancer center," Lichtenfeld says. If, as often happens, the hospital and the imaging center's computer systems don't talk to each other, the patient may have to bring the results back to the doctor on a CD. "For that patient who's in a lot of stress to begin with, it adds another level of stress," he says.

Dr. Vijay Rao, chair of the department of radiology at Thomas Jefferson University in Philadelphia, says the Anthem policy will create extra effort for hospital radiologists on a patient's care team, if they need to review and possibly redo the imaging center's work. Further, relying on a patient to transport the scan so that it can be put into the hospital's electronic medical record system "leaves lots of room for error," she says.

Anthem isn't the only insurer trying to find a way around hospitals' steeper costs for outpatient imaging, says Lea Halim, a senior consultant at the Advisory Board, a health care research and consulting company. The Medicare program is taking steps as well, although its approach doesn't directly influence patient care in the same way.

In recent years, hospitals have been snapping up independent physician practices and outpatient imaging and testing facilities, and then charging Medicare higher hospital outpatient fees for their services. In a bid to equalize payments, in January the Medicare program reduced by 50 percent the amount it pays some hospital-owned outpatient facilities — including imaging centers — that are located away from a hospital's campus.