Accessibility links
Gov. Brown To Sign Or Veto Controversial Drug Price Law : Shots - Health News A bill passed by the California Legislature requires drugmakers to give 60 days' notice before raising a drug's price by 16 percent or more over two years, and to justify the price increase. 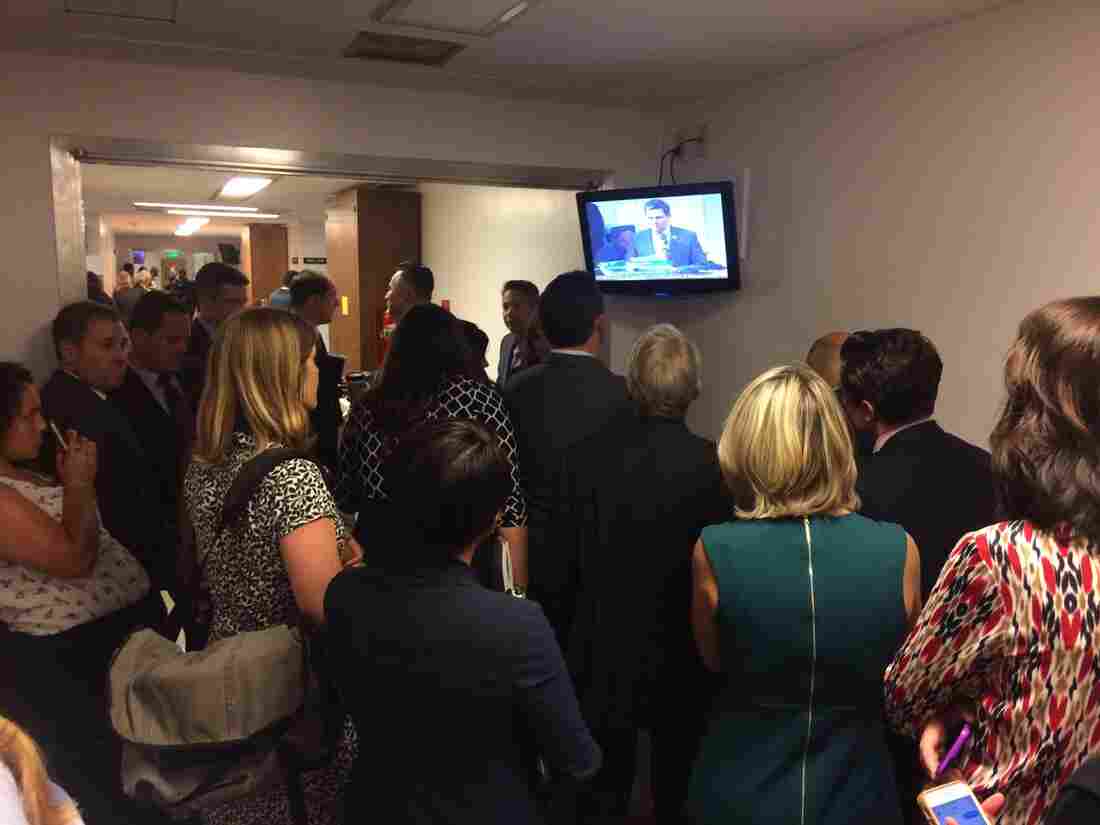 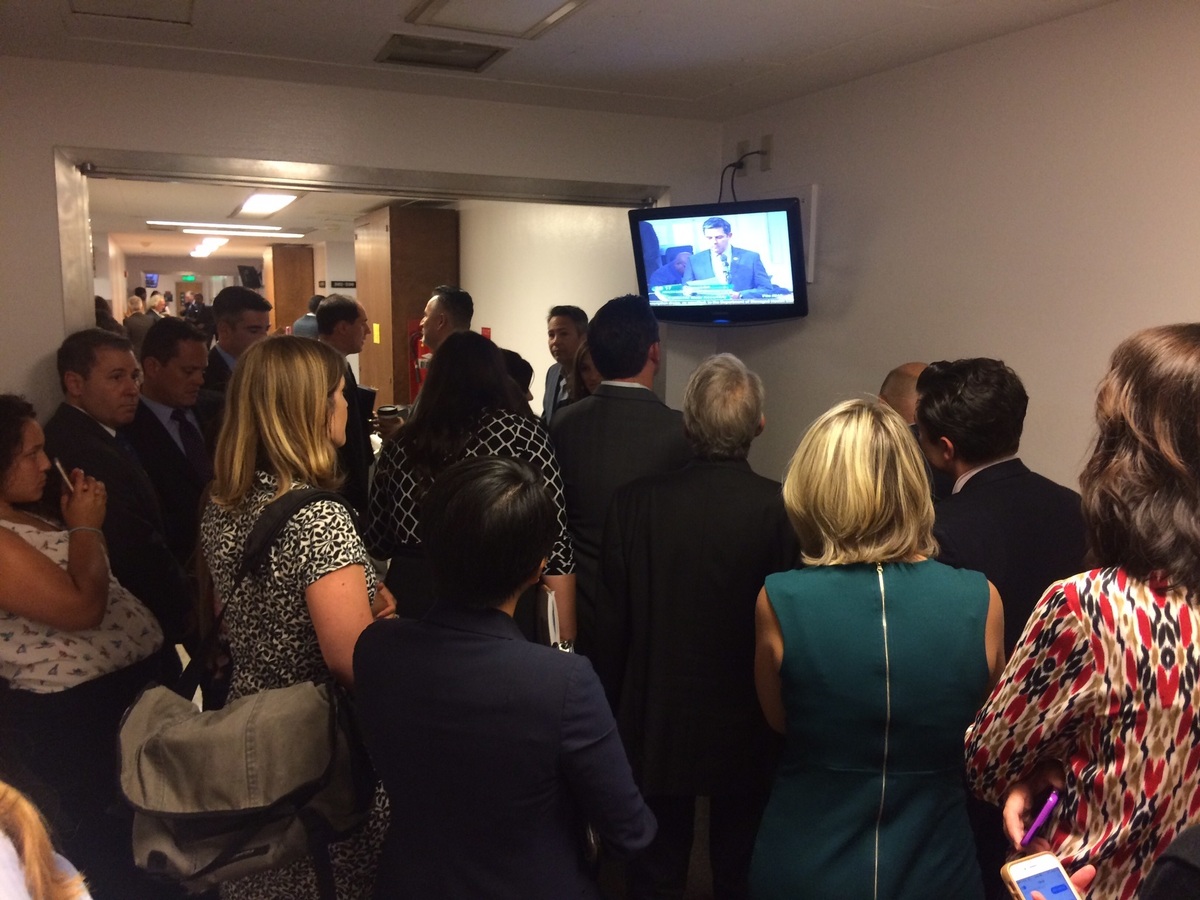 Drug lobbyists and consumer health advocates fill the halls of the state Capitol in September to see how Assembly members vote on a controversial drug price transparency bill.

Insurers, hospitals and health advocates are waiting for Gov. Jerry Brown to deal the drug lobby a rare defeat, by signing legislation that would force pharmaceutical companies to justify big price hikes on drugs in California.

"If it gets signed by this governor, it's going to send shock waves throughout the country," said state Sen. Ed Hernandez, a Democrat from West Covina, the bill's author and an optometrist. "A lot of other states have the same concerns we have, and you're going to see other states try to emulate what we did."

The bill would require drug companies to give California 60 days' notice anytime they plan to raise the price of a drug by 16 percent or more over two years. They would also have to explain why the increases are necessary. In addition, health insurers would have to report what percentage of premium increases are caused by drug spending.

Drugmakers have spent $16.8 million on lobbying since January 2015 to kill an array of drug legislation in California, according to data from the Secretary of State's Office. The industry has hired 45 lobbyists or firms to fight the price transparency bill alone. Against the backdrop of this opposition campaign, Brown must decide by Oct. 15 whether to sign or veto the bill.

This is the second go-round for this drug price bill. Last summer, the same legislation crashed and burned. Its intended regulations were gutted so extensively that Hernandez decided to pull it. But, he said, two key things happened after that, stetting the stage for a successful second attempt.

First, in August 2016, less than a week after Hernandez pulled the bill, a firestorm of controversy erupted nationally over the price of EpiPens spiking nearly 500 percent. The increase sparked outrage from parents who carry the auto-injectors to save their children from life-threatening allergic reactions.

Momentum grew among federal lawmakers last September to do something. They called for hearings. Several proposed bills aimed to reign in drug prices across the country.

But then, the election of November 2016 disrupted all order of health care business in Washington. After Donald Trump was elected and Republicans took control of Congress, the number one health policy priority became repealing and replacing the Affordable Care Act.

As federal lawmakers focused on dismantling the ACA, Hernandez said he saw another opportunity for state lawmakers to act on drug prices. He reintroduced his bill in early 2017, and this time political support grew quickly, beyond the usual suspects.

"It wasn't just labor," he recalls. "It was consumer groups, it was health plans. It was the Chambers of Commerce, it was the hospital association."

Hernandez is optimistic the governor will sign SB 17 into law. But he knows nothing's certain. That's because of what happened on Sept. 11, the day the bill came up for a key vote in the state Assembly — the same place it went down the year before. Hernandez thought he'd secured all the votes he needed, but at the last minute the votes started slipping away.

The bill needed 41 votes to pass the Assembly. During the roll call, the tally stalled around 35. Hernandez said he had plenty of colleagues willing to cast the 42nd vote, but with drug lobbyists swarming the Capitol, no legislators wanted to be the one to cast the deciding vote.

"If the bill fails and you're stuck out there, then you're the person that's attacking the industry," Hernandez says.

But, the bill crossed the 41-vote threshold and the remaining lawmakers joined in. In the end, the bill passed with 66 votes. All the Democrats and half the Republicans in the state Assembly voted for it.

This was much to the dismay of drug companies, which lobbied hard and issued a blitz of advertising in the last weeks before the vote.

The Pharmaceutical Research and Manufacturers of America, or PhRMA, a drug industry's trade group, argued that SB 17 was full of "false promises" that wouldn't help consumers pay for their medicines, and would instead stifle innovation with cumbersome regulatory compliance.

"That takes up a lot of resources and will take up a lot of time," says Priscilla VanderVeer, deputy vice president of public affairs for PhRMA. "And that could mean pulling resources from research and development and having to put it into the reporting structure."

Experts say the drug industry doesn't want a large influential state like California forcing them to share their data.

"When they have to justify in California, de facto, they have to justify it to the other 49 states," says Gerard Anderson, a health policy professor at Johns Hopkins Bloomberg School of Public Health in Baltimore. "Other states essentially get to piggyback on the good efforts of California, and hopefully, because they might have difficulty justifying the price increases, everybody's prices around the country will be lower."

Other states, including Maryland, Vermont, Nevada and New York, have passed similar laws aimed at bringing more transparency to prices and curbing price gouging. But the pharmaceutical industry has fought the hardest in California. If drug companies don't like the disclosure laws in smaller states, they could decide not to sell their drugs there, Anderson says, but the market in California is just too big to ignore.

"States like Maryland are just not as powerful," he says. "It just doesn't have the clout that a state like California has."

But drugmakers are likely already devising ways to work around the California bill, Anderson warns. They've filed lawsuits to try to slow or stop laws from being implemented in other states, or to weaken the rules if and when they go into effect. Policy experts are watching to see what kinds of legal challenges the California law might be vulnerable to, and if it can withstand them.

"We learn from the mistakes of other states," Anderson says. "Legislation is an iterative process. We have 50 states and hopefully, by some time, we'll get it right. We're looking for California to take the lead on this."