Accessibility links
Positive Hospital Marketing Campaigns Have A Painful Downside : Shots - Health News There are lots of "you can beat it" messages out there for cancer patients. For some, the positive spin feels insulting. The Food and Drug Administration doesn't regulate hospital ads. 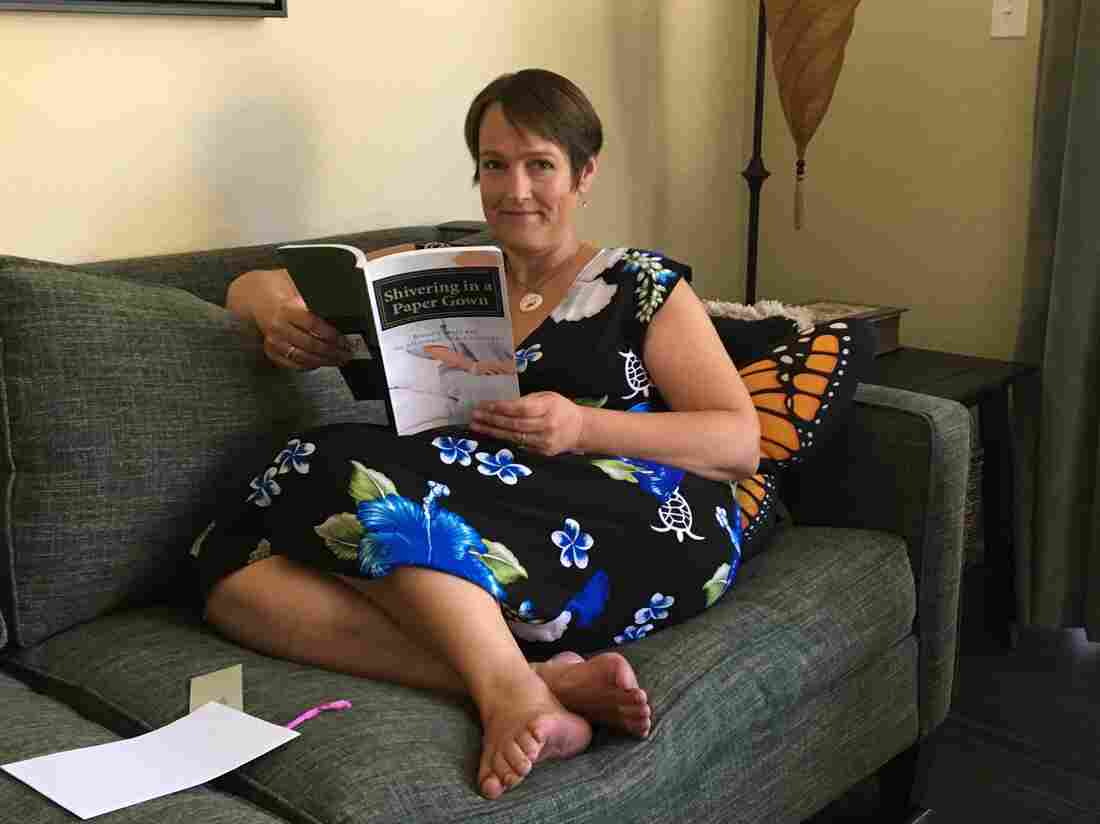 Lori Wallace says it's frustrating to constantly hear messages in ads for hospitals that imply her cancer would go away if she were just more positive and tried harder. Sam Harnett/KQED hide caption 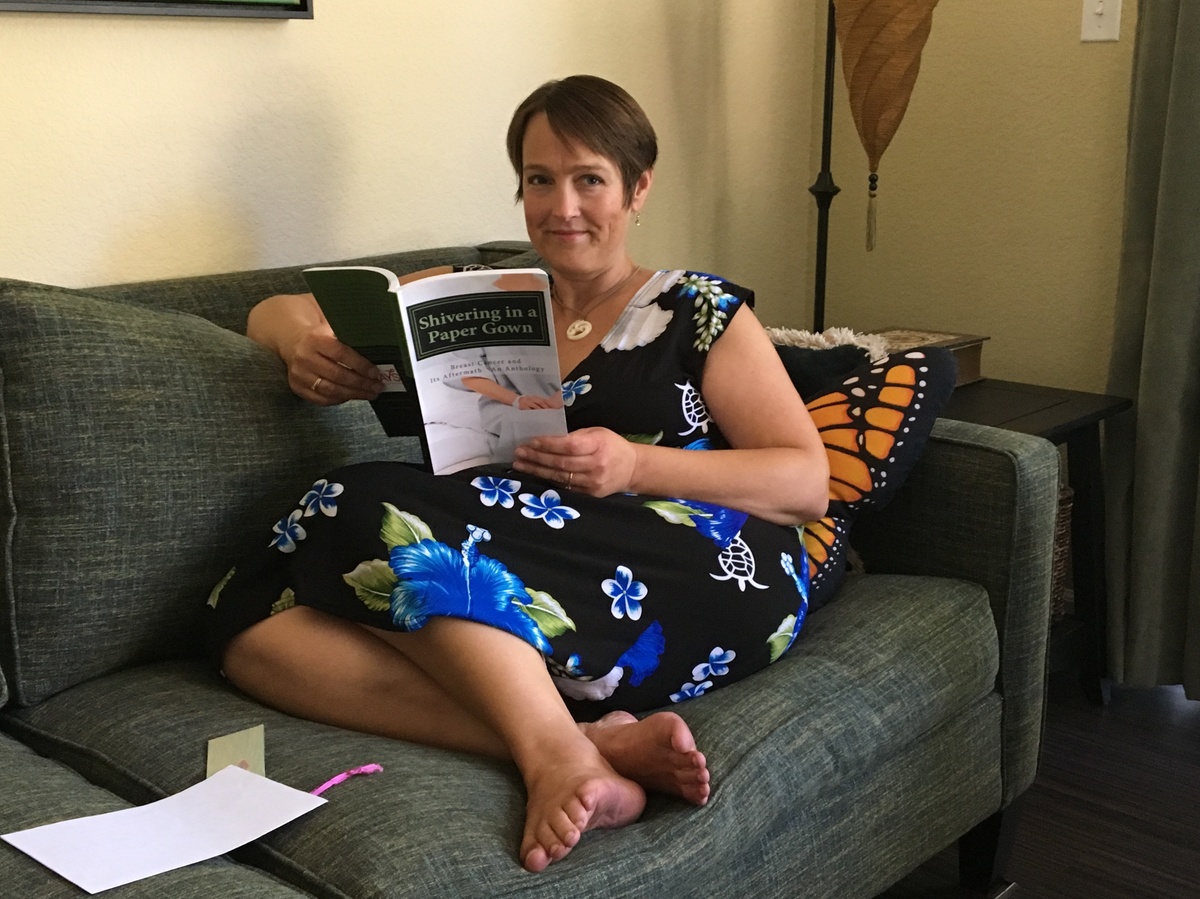 Lori Wallace says it's frustrating to constantly hear messages in ads for hospitals that imply her cancer would go away if she were just more positive and tried harder.

Lori Wallace is sitting on a couch with her 11-year-old son and his new pet snake. It's burrowing under his armpit, as if it were afraid. But Wallace says it's not.

"If he was terrified, he would be balled up," Wallace says. "See, that is why they are called ball pythons. When they are scared, they turn into a little ball."

Wallace is dying of breast cancer, but a stranger couldn't tell. She has a pixie haircut and a warm tan. She is vibrant and chatty and looks you right in the eyes when she talks. Wallace doesn't shy away from what is happening to her. She shows me her cracked feet. They bleed from the chemotherapy pills she takes.

As Wallace's cancer has progressed over the past seven years, she has become more critical of what she sees as excessive positivity in health care marketing. It's everywhere: TV ads, radio commercials, billboards. The advertisements feature happy, healed patients and tell stories of miraculous recoveries. The messages are optimistic, about people beating steep odds. Wallace says the ads spread false hope, and for a patient like her, they are a slap in the face.

A couple of decades ago, hospitals and clinics did not advertise much to customers. Now, they are spending more and more each year on marketing, according to university professors who study advertising, and are keeping track.

Wallace, who lives in San Jose, Calif., says she used to be a hopeful person, someone who believed you could fight through any misfortune. Then she was diagnosed with breast cancer. Wallace was 39. Her son was 4. She couldn't believe it.

The chemotherapy treatment makes her brain foggy, Wallace says. She is now in her fifth round. Her cancer is Stage 4 and has spread throughout her body. It's going to kill her, she tells me.

"The median survival of a woman with metastatic breast cancer is 33 months," Wallace says. "My 33 months would have been Dec. 6 last year. So I am on bonus time right now."

Wallace pulls up an ad on her computer from UCSF Benioff Children's Hospital, in San Francisco. An announcer intones, "Amid a thousand maybes and a million nos, we believe in the profound and unstoppable power of yes."

There is a similar kind of optimism at the heart of a lot of the ad campaigns by health care providers — with slogans like "Thrive" and "Smile Out." Wallace says the subtext of the ads is that people like her — who get sick and will die — maybe just aren't being positive enough.

Hospitals aren't held to any of those standards at all. So a hospital can go out and say, 'This is where miracles happen. And here's Joe. Joe was about to die. And now Joe is going to live forever.'

"I didn't say 'yes' to cancer," Wallace says. "I have tried everything I can. I have done clinical trials. I have said 'yes' to every possible treatment. And the cancer doesn't care."

Karuna Jaggar is executive director of Breast Cancer Action. She says health care providers are following in the footsteps of other companies.

"It's the basics of marketing," Jaggar says. "In order to sell products or services, you have to sell hope."

She says health care advertisers are adopting the kind of optimistic messaging that really began in force with the pink ribbons and rosy depictions of breast cancer.

"Thirty years ago, breast cancer was the poster child of positive thinking," Jaggar says. " 'Look good, feel better, don't let breast cancer get you down. Fight strong and be cheerful while you do it.' "

Back then, health care providers marketed to physicians more than consumers. The ads were drier, more factual, says Guy David, an economist and professor of health care management at the University of Pennsylvania.

"When the ads are more consumer-facing as opposed to professional-facing, the content tends to be more passionate," David says.

The hospital ads Wallace is objecting to tug at emotions, just like other advertising that is trying to win over consumers. With increasing health care costs and choices, patients are shopping around for care. Tim Calkins is a professor of marketing at Northwestern University. These days, he says, hospitals have to sell themselves.

Hospitals are spending more than ever on advertising, he says, and, as with other products, that advertising is filled with lots of promises. He says you don't see the same promises in the pharmaceutical industry. Their ads are regulated by the Food and Drug Administration, which is why they have to list all those side effects and show scientific backing for their claims.

"Hospitals aren't held to any of those [FDA] standards at all," Calkins says. "So a hospital can go out and say, 'This is where miracles happen. And here's Joe. Joe was about to die. And now Joe is going to live forever.' "

Lori Wallace is not going to live forever. Before cancer, she says, she would have been attracted to the messages of hope. But now, she says, she needs realism — acceptance of both the world's beauty and its harshness. She wrote an essay about that for the women in her breast cancer support group.

The essay is titled "F*** Silver Linings and Pink Ribbons." Wallace reads me the whole piece from start to finish. We are sitting at her kitchen table. Her son is nearby with his pet snake.

Toward the middle of the essay, Wallace writes, "My ovaries are gone, and without them my skin is aging at hyperspeed. I have hot flashes and cold flashes. My bones ache. My libido is shot and my vagina is a desert." The essay is open, funny and unflinching, just like Wallace.

She reads me the final paragraph: "I will try to be thankful for every laugh, hug and kiss, and other things, too. That is, if my chemo-brain allows me to remember."