Accessibility links
Will Trump's Order Really Expand Health Care Choices? : Shots - Health News Conservatives have long advocated for using association health plans to boost competition. But the result could be that healthy people pay less and sicker people are priced out of coverage. 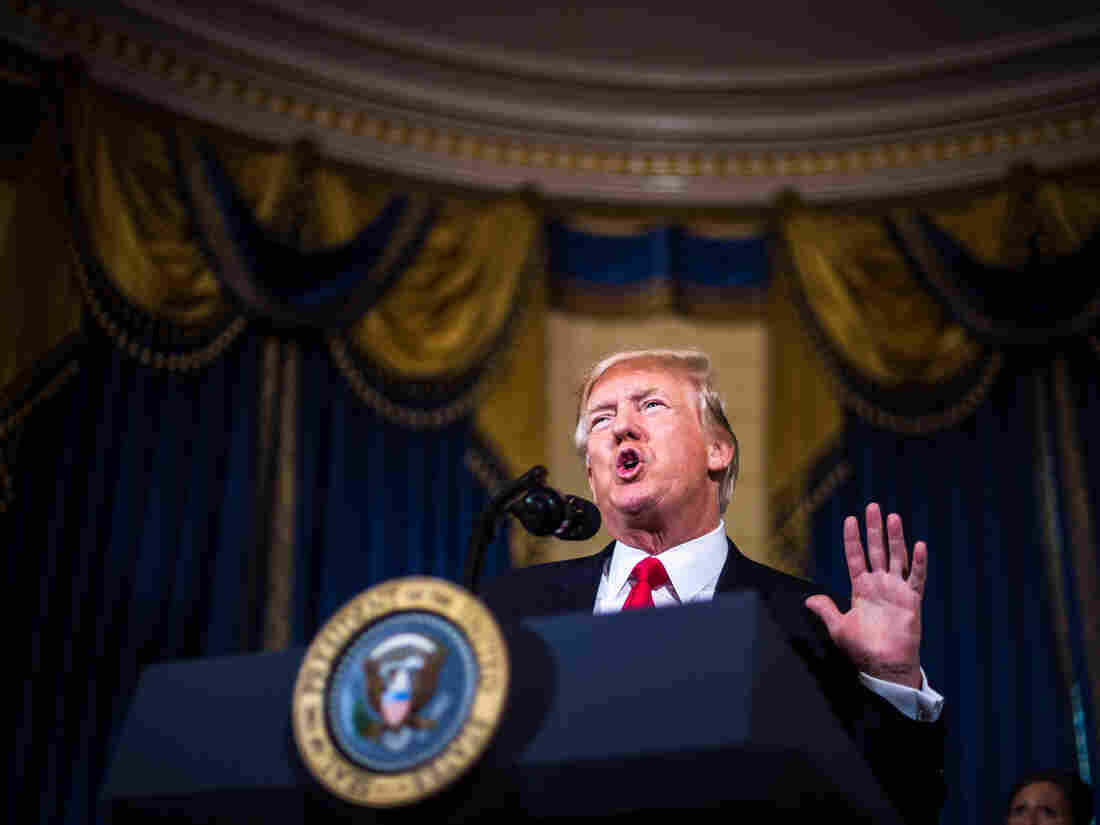 President Trump spoke from the White House in July in an effort to promote health overhaul legislation. He's now trying to make changes through an executive order. The Washington Post/Getty Images hide caption 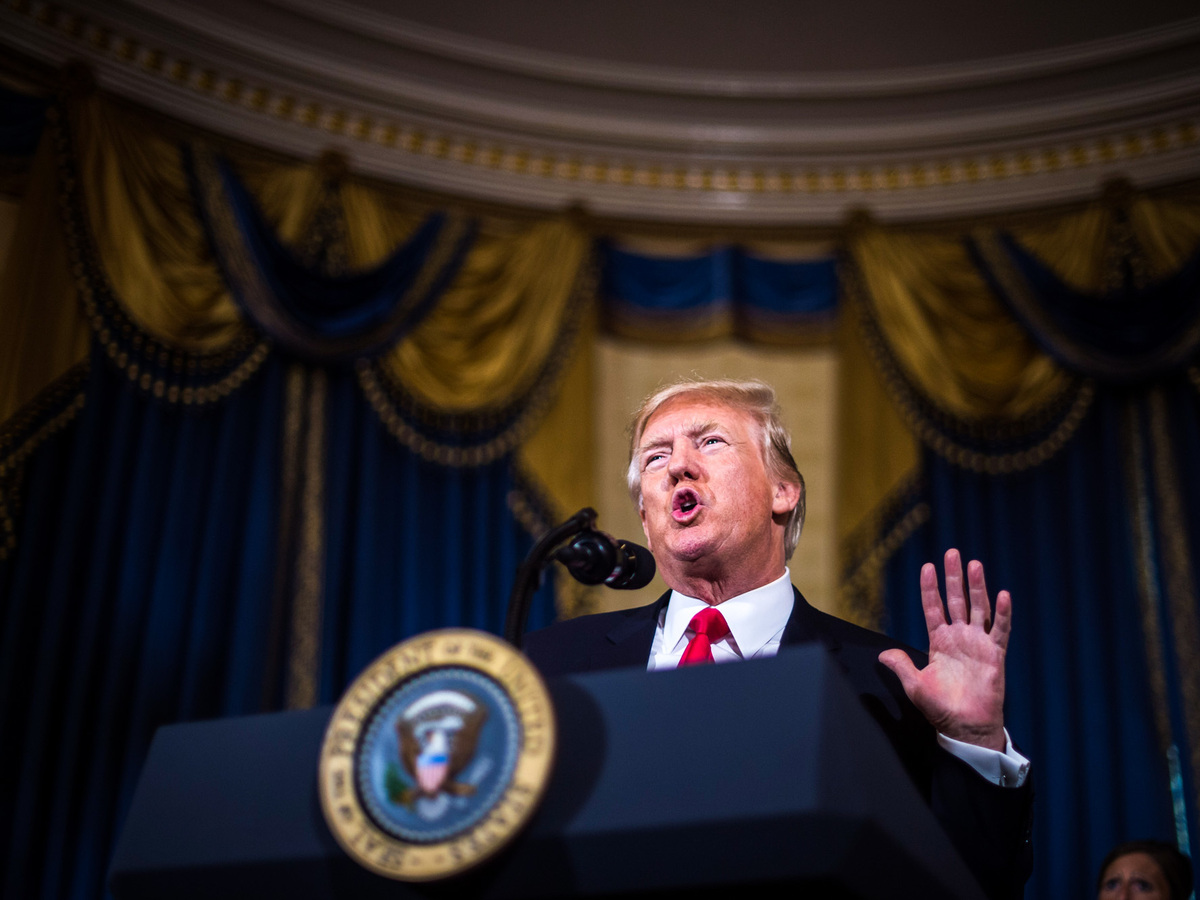 President Trump spoke from the White House in July in an effort to promote health overhaul legislation. He's now trying to make changes through an executive order.

President Trump is poised to sign an executive order that he says will make it easier for people to join together as a group and buy health insurance from any state.

The president tweeted about his plans on Tuesday morning.

"Since Congress can't get its act together on HealthCare, I will be using the power of the pen to give great HealthCare to many people — FAST," he wrote.

The order would direct government agencies with jurisdiction over health insurance to find ways to allow consumers and small businesses to create associations to buy health coverage, according to The Wall Street Journal, which cited an unnamed Trump administration official.

Since Congress can't get its act together on HealthCare, I will be using the power of the pen to give great HealthCare to many people - FAST

Proponents of the move say that association health plans, which could be offered by trade groups, chambers of commerce or groups of small businesses, would not be bound by Affordable Care Act regulations that require insurance policies to cover everyone, no matter their health status, and to cover a specific set of benefits.

Conservatives have long advocated for these kinds of plans because they say they will boost competition and lower premiums. Kentucky Sen. Rand Paul argued for them on NPR's All Things Considered in September.

"We believe that previous administrations have defined the law too narrowly, and under a new definition, there will be a wider expansion of AHPs, which will greatly lower costs to the consumer and provide more health insurance options," Rand's communications director Sergio Gor said in an email to NPR on Tuesday.

But health industry analysts say that if the policies don't have to follow ACA rules, they would likely draw healthier people out of the traditional insurance market with the lure of low-premium policies that offer few benefits. That would leave the Obamacare markets with a sicker, more expensive population and could drive their premiums higher.

"If the executive order is as expansive as it sounds and association plans are allowed to cherry-pick healthy people, it could truly cause the individual insurance market under the ACA to collapse, leaving people with pre-existing conditions without access to affordable coverage," says Larry Levitt, senior vice president of the Kaiser Family Foundation.

But he says exempting insurance plans from the ACA rules through regulation would be difficult.

"They would have to twist current laws into a pretzel to allow both individuals and small businesses to get insurance through associations exempt from the ACA's rules and operating across state lines," Levitt says.

Joseph Antos, a health policy scholar at the conservative American Enterprise Institute, agrees. "Trying to exempt these new associations from ACA rules that apply to all other plans doesn't strike me as something that's going to stand up in federal court," Antos says.

Insurance markets are defined by local populations and local hospital networks, Antos says. There's no reason to believe that an association of people spread across many states would be able to negotiate better deals with health care providers than insurance companies already do.

Health insurers have long opposed the idea, saying it will drive premiums higher for many consumers. "Association health plans would fragment and destabilize the small group market, resulting in higher premiums for many small businesses," the National Association of Insurance Commissioners said in a position paper on its website.

Insurance premiums are based on the health status of the people who are included in the group being covered. Under the Affordable Care Act, those groups are defined by geography — everyone of the same age group in the same region pays the same premium for similar coverage.

Allowing some people to pull out of that group and buy less generous insurance could split the market between healthy people who don't need much care and sicker people who use more. And that would drive up costs for those sicker people.

But Trump has long said the cost of insurance has risen too much under the ACA and that he wants to see people have more choices, including the choice to buy insurance with fewer benefits.

The order, which is expected later this week, would begin to fulfill Trump's promise during his campaign to allow people to buy insurance "across state lines," a goal that many conservatives say will boost competition. Insurance markets are currently regulated at the state level, and consumers can only buy policies that are approved in their state.

Trump said in the Oval Office on Tuesday that he'll be "signing something probably this week that's going to go a long way to be able to help a lot of the people who have been hurt on the health care. "They'll be able to buy, they'll be able to cross state lines and they'll get great competitive health care and it will cost the United States nothing," the president said.