Accessibility links
March for Life And Real Alternatives Benefit From Contraception Rule : Shots - Health News The administration's decision to allow some employers to bypass a requirement to provide no-cost contraceptives to women on moral grounds would benefit specific anti-abortion groups.

New Rule On Moral Objections To Contraception Aimed At 2 Groups

New Rule On Moral Objections To Contraception Aimed At 2 Groups 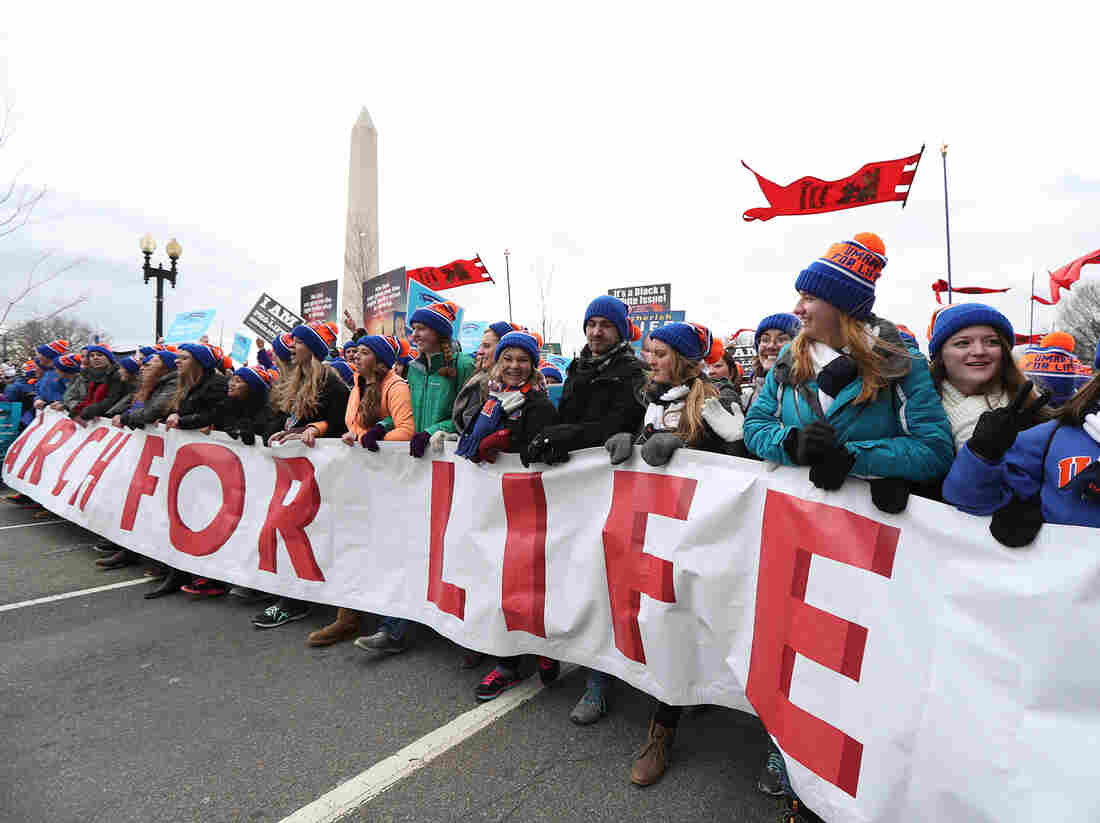 People in the March for Life near the National Mall in Washington, D.C., on Jan. 27. Manuel Balce Ceneta/AP hide caption 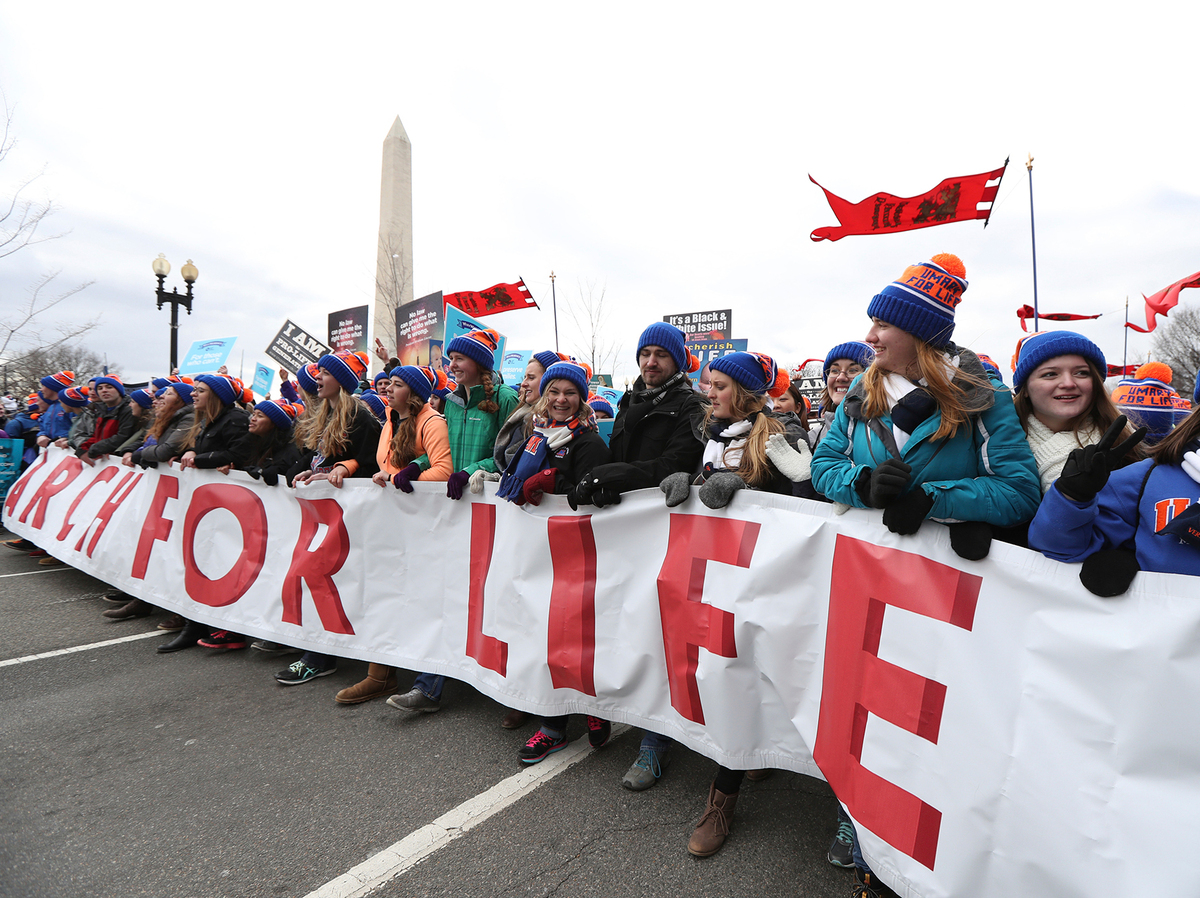 People in the March for Life near the National Mall in Washington, D.C., on Jan. 27.

Few people were surprised last week when the Trump administration issued a rule to make it easier for some religious employers to opt out of offering no-cost prescription birth control to their female employees under the Affordable Care Act.

But a separate regulation issued at the same time raised eyebrows. It creates a new exemption from the requirement that most employers offer contraceptive coverage. This one is for "non-religious organizations with sincerely held moral convictions inconsistent with providing coverage for some or all contraceptive services."

So what's the difference between religious beliefs and moral convictions?

"Theoretically, it would be someone who says 'I don't have a belief in God' but 'I oppose contraception for reasons that have nothing to do with religion or God,' " says Mark Rienzi, a senior counsel for the Becket Fund for Religious Liberty, which represented many of the organizations that sued the Obama administration over the contraceptive mandate.

Nicholas Bagley, a law professor at the University of Michigan, says it would apply to "an organization that has strong moral convictions but does not associate itself with any particular religion."

What kind of an organization would that be? It turns out not to be such a mystery, Rienzi and Bagley agreed.

Among the hundreds of organizations that sued over the mandate, two — the Washington, D.C.-based March for Life and the Pennsylvania-based Real Alternatives — are anti-abortion groups that don't qualify for religious exemptions. While their employees may be religious, the groups themselves are not.

March for Life argued that the ACA requirement to cover all contraceptives approved by the Food and Drug Administration includes methods that prevent a fertilized egg from implanting in a woman's uterus and therefore are a type of abortion. Real Alternatives opposes the use of all contraceptives.

March for Life, which coordinates an annual abortion protest each year, won its suit before a federal district court judge in Washington, D.C.

But a federal appeals court ruled in August that Real Alternatives, which offers counseling services to help women choose not to have an abortion, does not qualify as a religious entity and thus can't claim the exemption. That decision cited a lower court ruling that "finding a singular moral objection to law on par with a religious objection could very well lead to a flood of similar objections."

The departments of Treasury, Labor and Health and Human Services, however, suggest that, at least in this case, that will not happen. The regulation issued by those departments says officials "assume the exemption will be used by nine nonprofit entities" and "nine for-profit entities." Among the latter, it says, "we estimate that 15 women may incur contraceptive costs due to for-profit entities using the expanded exemption provided" in the rules.

The regulation also seeks comments on whether the moral exemption should be extended to publicly traded firms.

Rienzi agrees that the universe for the moral exemption is likely to be small. "The odds that anyone new is going to come up and say 'Aha, I finally have my way out,' " he says, "is crazy."

Women's health advocates, however, are not so sure.

"The parameters of what constitutes a moral objection is unclear," says Mara Gandal-Powers, senior counsel at the National Women's Law Center, which is preparing to sue to stop both rules. "There is nothing in the regulatory language itself that says what a moral belief is that would rise to the level of making an organization eligible for the exemption."

Louise Melling, deputy legal director at the American Civil Liberties Union, which has already filed a lawsuit, agrees. "We don't know how many other entities are out there that would assert a moral objection," she says. "Not everybody wanted to file a suit," particularly smaller organizations.

All of that, however, presupposes that the rule laying out the moral objection exemption will stand up in court.

Bagley says he's doubtful. The legal arguments making the case for the exemption, he says, are "the kind of things that would be laughed out of a [first-year] class on statutory interpretation."

Specifically, he says, the rule lays out all the times Congress has included provisions in laws for moral objections. But rather than justifying the case, "it suggests that Congress knew a lot about how to craft a moral objection if it wanted to," and it did not in the health law, he noted.

Bagley says the fact that the moral exemption was laid out in a separate rule from the religious one demonstrates that the administration is concerned the former might not stand up to court proceedings. "The administration must sense this rule is on thin legal ice," he says.

Which leads to the question of why Trump officials even bothered doing a separate rule. Bagley says he thinks the act was more political than substantive. "The administration is doing something that signals to religious employers ... that they are on their sides, that they have their backs."