Accessibility links
As She Evacuated Patients From The Hospital, Her Home Burned : Shots - Health News On extremely short notice, two hospitals had to evacuate all their patients as wildfires spread rapidly through Santa Rosa, Calif., last Sunday and Monday. One nurse on duty tells her story. 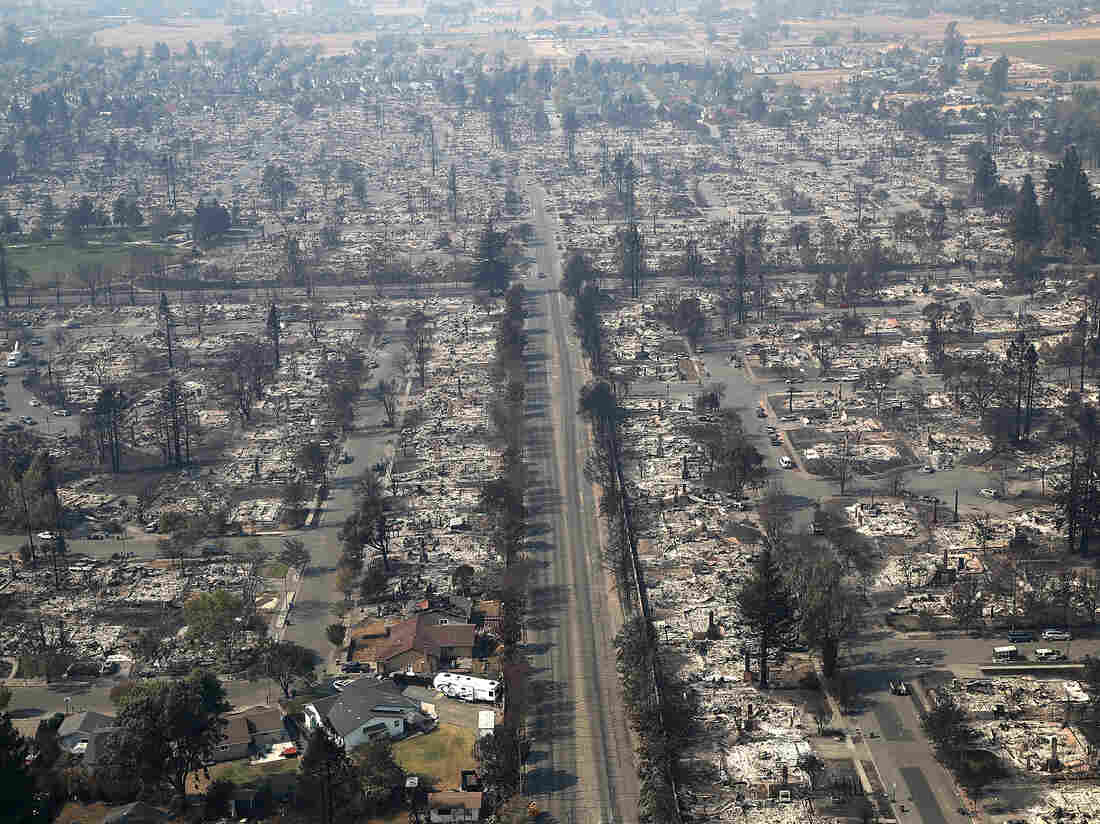 Hundreds of homes in the Coffey Park neighborhood that were destroyed by the Tubbs Fire on October 11, 2017, in Santa Rosa, California. Justin Sullivan/Getty Images hide caption 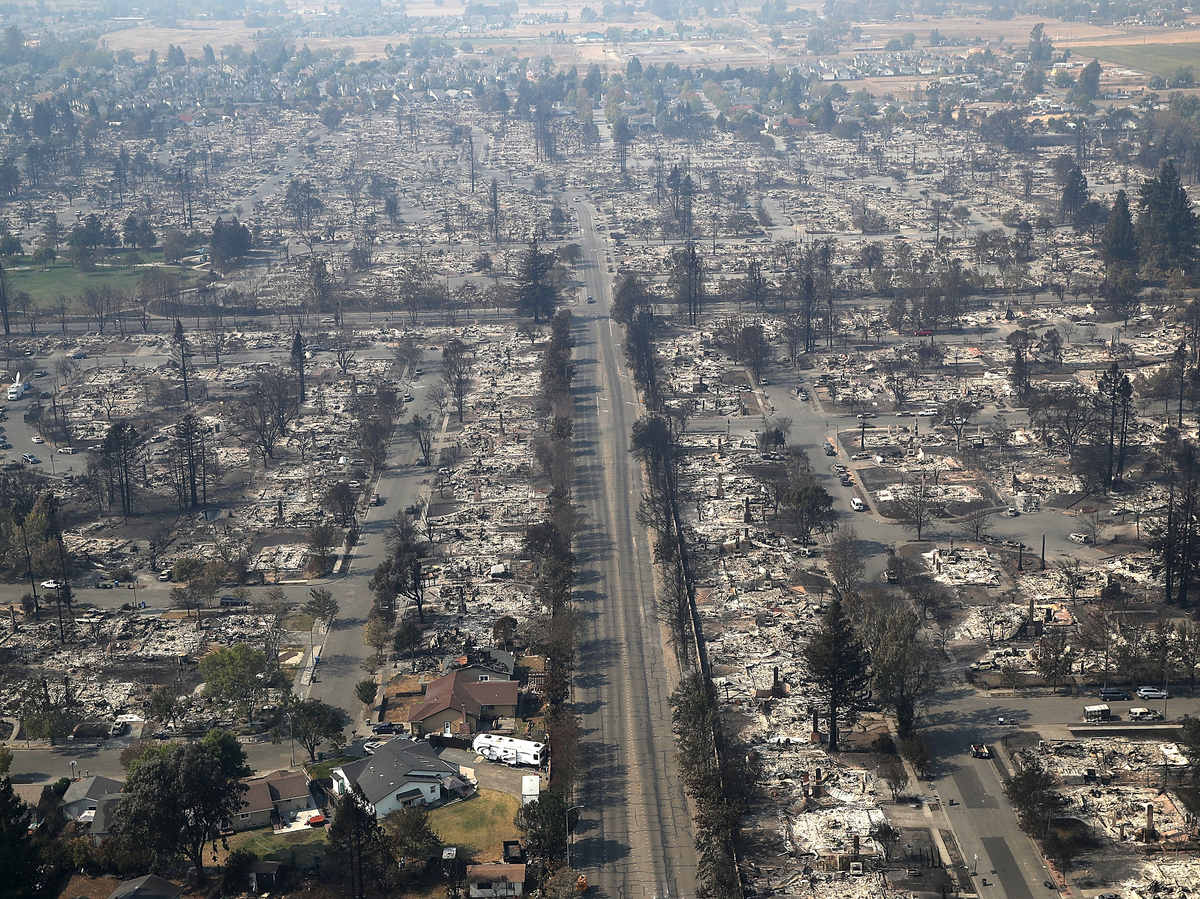 Hundreds of homes in the Coffey Park neighborhood that were destroyed by the Tubbs Fire on October 11, 2017, in Santa Rosa, California.

Julayne Smithson was working an overnight shift in the Intensive Care Unit at the Kaiser Permanente hospital in Santa Rosa, Calif., when massive wildfires started racing through the city late last Sunday.

Smithson had no idea how close they were. She was too busy taking care of her patient. Then, she says, "One of the nurses came up to me and she said, 'Julayne, I'm sorry, but your house is not going to make it.'"

Smithson, 55, recently moved from Indiana and had just bought a new home a few weeks ago. From the hospital window, she could see the flames moving through her neighborhood.

Smithson asked a colleague to watch her patient while she raced home to try to save a few things. The fire was a block away.

"I knew I didn't have much time," she says. "So I ran inside and I thought, 'I have to get my nursing documents, because if I'm going to lose everything I own, I have to be able to work, to care for patients.'"

She grabbed the papers, a pair of scrubs and a nightgown, and raced back to the ICU. Over the next two hours, smoke filled the hospital.

"All of a sudden the police busted in the door and they said, 'Everybody out! 'Grab what you can carry, get your patients, and go now,'" she recalls.

One of Kaiser's emergency room doctors took charge as the fire approached, setting up a disaster command center, and making the call to evacuate the hospital's 130 patients.

"It's a really challenging decision to make, one you don't make lightly," says Joshua Weil, Kaiser's ER doctor in charge that night. "You have to weigh the potential risk of moving hospitalized patients and patients from the emergency department, versus the risk of keeping them where they are."

He decided to evacuate when the fire moved suddenly toward the hospital. Firefighters told him the blaze was 100 to 200 yards from the property, posing an imminent threat to the hospital structure.

Nearby Sutter Santa Rosa Regional Hospital was also evacuating, and they had close to 80 patients, so ambulances were in high demand.

"A lot of nurses and staff were putting patients in their cars and driving them to the hospital," she says. "And then other people were carrying people on blankets, people who couldn't walk, and putting them in cars."

In the end, Smithson says they waited about 15 minutes for an ambulance, but it was a long 15 minutes. Her team was manually pumping air into her patient's mouth with an air bag. A team of five had to push him, in his bed with all the monitors, through the parking lot several times to get away from fast-moving smoke and flames. His medication was running low and he was getting agitated.

"The pharmacy pre-mixes those medicines for us, but we didn't have time to prepare extra medication for a trip like that because it just came up so fast," she says.

Smithson's patient and others made it safely to Santa Rosa Memorial Hospital, about four miles away. About a hundred less critical patients were transferred to Kaiser's hospital in San Rafael, about 40 miles away.

Beatrice Immoos was one of the nurses there getting prepped to receive the influx.

"We were essentially told that we were in a disaster situation and all ratios were out the window," she says, meaning nurses would be assigned more patients than usually allowed under California law. "They were going to start triaging people through the ER."

She remembers patients arriving wearing colored armbands, indicating the severity of their health status. These were likely assigned by paramedics during transport, Weil says.

"This level of disaster is a new one for us," says Immoos. "It was very emotional, but there was a lot of resolve. Every day, nurses are always working with the common goal of taking care of our patients, and in a disaster, it's just even more hands on deck working to get them the best treatment."

The hospital put out calls for volunteer nurses to come help in San Rafael. Many responded, including Julayne Smithson. Her husband was supposed to fly in from Indiana in two days, but with their new home gone, she told him to wait.

Another nurse offered Smithson a pullout couch in a spare room. She's been sleeping there during the day, and working 7 p.m. to 7 a.m. every night since the fire. She says all she wants to do right now is help patients, so she doesn't have to think about what she's lost.

This story is part of a reporting partnership with NPR, KQED and Kaiser Health News, which is not affiliated with Kaiser Permanente.