Accessibility links
Many Lab Monkeys Do Better When Housed With A Pal : Shots - Health News Enhancing a research monkey's life by housing it with a pal often doesn't hurt the study, says a researcher who's done it. In her own experience, she says, "it actually helped to improve the science." 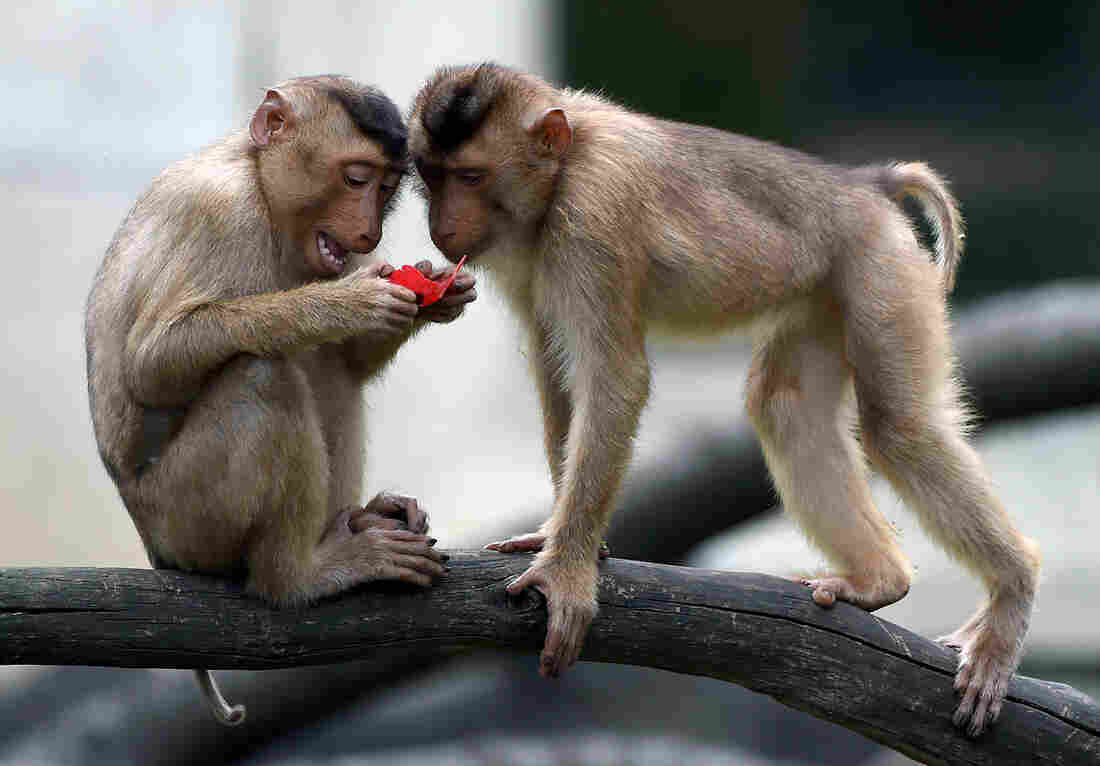 Macaques are social animals, whether in a group enclosure like this one at the Gelsenkircen zoo in western Germany, or in the wild. But many research monkeys are still housed in separate cages. Patrik Stollarz/AFP/Getty Images hide caption 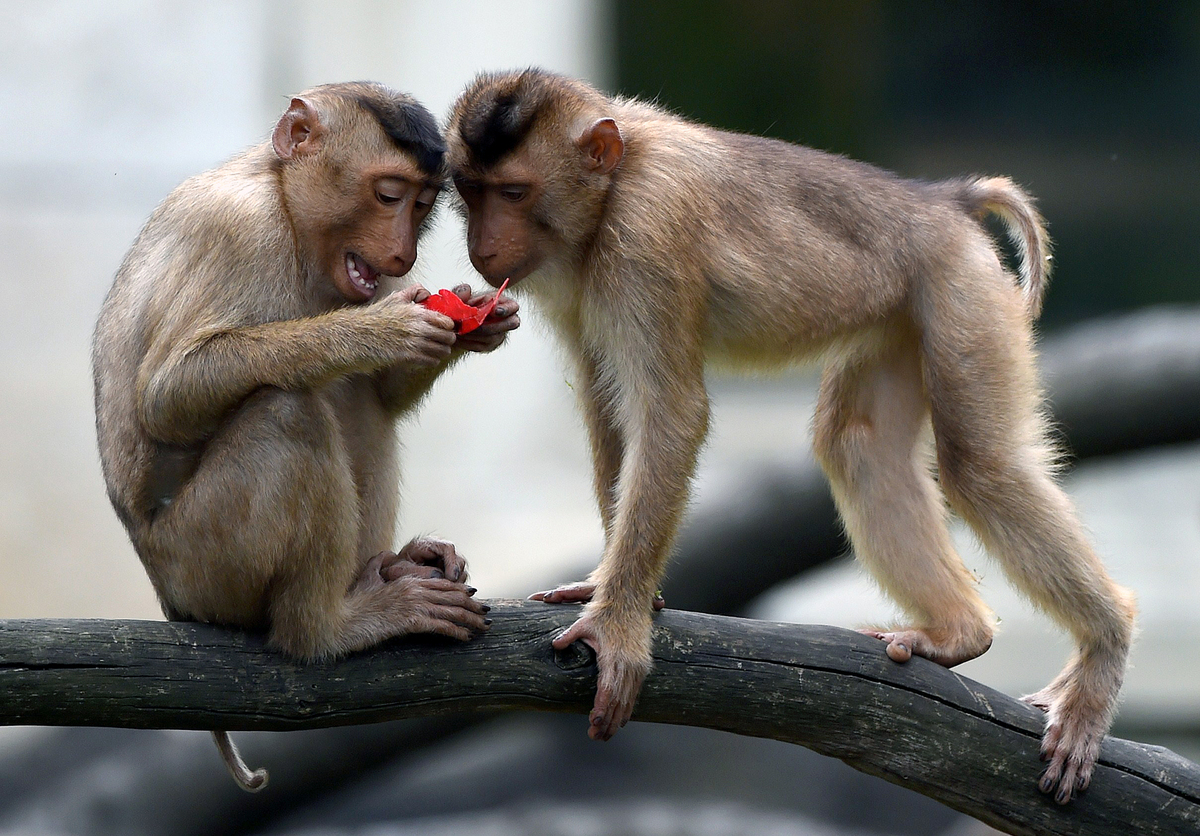 Macaques are social animals, whether in a group enclosure like this one at the Gelsenkircen zoo in western Germany, or in the wild. But many research monkeys are still housed in separate cages.

In a small, windowless room at Johns Hopkins University, pigtail macaques jump around in cages. The braver ones reach out between the metal bars to accept pieces of apricot with their long fingers.

In one cage, a monkey hangs back in the corner. At first it looks like he's all alone in there, until veterinarian Bob Adams points out, "No, he's got a friend." Another monkey is clinging to his back, almost hidden.

Not too long ago, these guys wouldn't have had a pal to hold on to.

Like humans, monkeys are social animals. But for two decades, researchers here routinely put animals in separate cages after experimentally infecting them with a monkey form of HIV. The concern was that cagemates might swap viruses and mess up the science.

Then, a few years ago, Adams urged the research team to try pairing up the animals. It's worked out great, and now each cage houses two buddies.

"Part of the realization that people are coming to is not just that it's not a problem, but that it actually helps to improve the science," says Kelly Metcalf Pate, who uses these monkeys to study how HIV can evade treatment.

Loneliness can suppress the immune system, Pate notes, and being alone is not what most infected humans experience. "The majority of patients, regardless of disease that we're looking at, aren't living in isolation," she says.

But many lab monkeys do live in cages alone.

Last year, 109,821 primates were held in research facilities across the United States, according to data collected by the government. Some of those animals were kept for breeding or other non-experimental purposes, but the majority were used to study everything from cancer to diabetes to addiction.

In 2014, a survey of labs found that 35 percent of primates being housed indoors for research studies were in cages alone. That's down from 59 percent in 2003, says Kate Baker of Tulane National Primate Research Center, who did both surveys.

"There has been a lot of progress," says Baker.

But the degree of progress depends on the species, her research suggested. For rhesus macaques, one of the primates most commonly used in labs, the percentage of animals who were singly housed barely budged: Roughly half of those used in experiments lived in cages alone.

That isn't how their lives usually start. These monkeys are typically born into breeding colonies that have dozens of animals living together in large social groups.

At Yerkes National Primate Research Center in Atlanta, for example, rhesus macaques groom each other and play on climbing structures in outdoor enclosures the size of basketball courts. "See the little baby right here with the mom, sitting right underneath that blue climbing structure? That baby was probably born in the last two weeks," says veterinarian Maria Crane. "They are extremely acrobatic. It's amazing when you watch them run around and play within these areas, how agile they are."

She said most monkeys remain in a group like this until the age of 3, although "it depends on the project needs."

As much as possible, she says, researchers try to maintain some kind of social housing for the animals taken to biomedical labs although, again, their fate depends on the requirements of the scientific studies.

Going to live in a small cage in an indoor lab is a huge, stressful change for a monkey. And it's even worse if they suddenly have to live by themselves.

"Social housing is the most important thing to a primate. No doubt," says Kathleen Conlee of the Humane Society of the United States, who once worked at a primate breeding and research facility.

Isolated monkeys can sometimes become emotionally disturbed, says Conlee. "They go crazy, I guess is the way you can put it, where they can self-mutilate to the point of breaking their skin. We've seen animals have tears in their arms and legs from self-biting, pulling all their hair out to the point where they're bald."

In 1985, she says, amendments to the Animal Welfare Act required labs to care for the psychological well-being of primates, and the importance of social housing was clear.

"Unfortunately when they wrote the standards, a lot of the standards have to do with how you can exempt yourself from social housing," says Conlee. "So while there's an emphasis on it, it's just not happening to the degree that it should."

Lately, however, there's been increased pressure from regulators, including changes to the Guide for the Care and Use of Laboratory Animals used by the Office of Laboratory Animal Welfare at the National Institutes of Health, which now calls social housing for nonhuman primates the "default."

And this comes as scientists are figuring out exactly what it takes to successfully pair monkeys together.

After all, just like people, not all monkeys will get along. If two of them get put in a small cage, and they start to fight — there's nowhere to run. Injuries can be serious, even fatal.

That's why a couple dozen vets and lab workers gathered for a workshop held earlier this year at Yerkes, to learn about best practices for monkey matchmaking and how to detect any sign of a brewing conflict.

"We're trying to sort of apply the recent science to the practice of how people can do this in their own facilities," says Mollie Bloomsmith, the head of behavioral management at Yerkes.

That science includes the work of researchers like Kristine Coleman, of the Oregon National Primate Research Center, who has been exploring temperament testing of animals.

"People have found differences in say, shyness and boldness, or inhibition and exploratory behavior," says Coleman, adding that her lab has found that female rhesus macaques tend to be more compatible with partners that have similar temperaments.

Baker, one of the workshop instructors, says that the "Holy Grail" is to have "an early sign of how this introduction is going to go, so that if it is going badly we can terminate the introduction attempt before anyone gets injured."

Lab workers really care about the monkeys and understand the importance of social housing, says Baker, who notes that monkeys show less stress if they have a familiar partner housed with them or even within sight of them.

To understand the importance of using the right methods, consider Augusta University, in Georgia. A couple years ago, federal inspectors went there and found about 50 research monkeys. Almost all of them lived in cages alone.

A university official told a local newspaper that the monkeys had lived like that for most of their lives and were too aggressive to be paired up.

What Are The Planet's Real 'Talking' Chimps And Gorillas Saying?

But the university has made major improvements since then, says Patricia Charlton, director of veterinary services. "We are now up to 60 percent of the animals being socially housed," she tells NPR.

What made the difference was hiring a new lab worker with lot of experience with primates, she says. They gradually introduced the animals to each other while watching their behavior carefully.

"It's different ways of looking at these animals that we just were not doing before. It's a learning curve," says Charlton.

Researchers have also been learning more about when the science doesn't really justify isolating monkeys.

It used to be, says Bloomsmith, that researchers just assumed that they needed to singly cage any monkey that had been given a medical implant or had been outfitted with experimental hardware. The thinking was that a cagemate would disturb the devices or pull them out.

It turns out, that wasn't true.

"Now it's very widespread that people are socially housing animals with a variety of different types of implants like that and having great success," says Bloomsmith.

Back at Johns Hopkins, in the lab where infected monkeys now live together in pairs, veterinarian Eric Hutchinson points out that researchers have to keeping trying new things to show how the monkeys' lives can be enhanced without hurting the science.

He notes that other scientists doing very similar virus research are still separately housing their monkeys after infection.

"It's not that hard to come up with a reasonable-sounding justification for keeping animals apart," says Hutchinson, "until you hear from somebody else that's doing the exact same thing and housing them together."